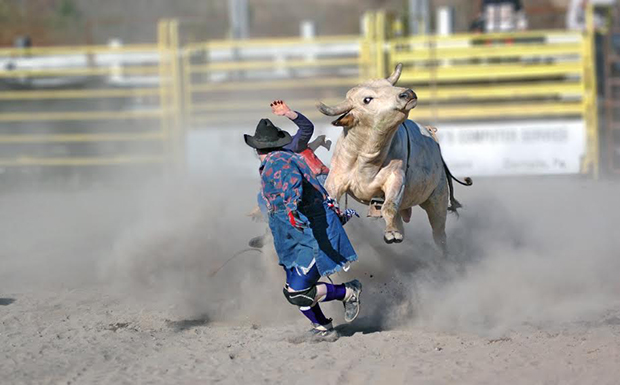 We asked 25 photographers: ‘What’s the worst job you had before becoming a professional photographer?’

Brooke Frederick: A “Fan Photographer” at Lakers and Kings sporting events in LA. You basically had to chase people down and convince them to let you take their photo and then buy it. People would run away from me, completely ignore me, or yell at me to leave them alone. It was not fun.

Eirik Johnson: I worked as a landscaper and garbage collector for a housing development while in college. Pardon the pun, but that stank.

Cig Harvey: I sold aerial photographs door-to-door for a while one summer after graduating high school. It was brutal.

Matt Black: Pruning a grove of walnut trees at $5.00 an hour.

Jamie Diamond: When I got out of graduate school, I moved to New York, and in order to pay the rent, I had a few very strange jobs. Probably the worst was working for a financial research company where I essentially had to summarize public companies monthly reports. It was excruciatingly boring, but the irony of it all was that most of the others who worked there were also artists. It was the strangest working environment I’ve ever experienced.

Michael Lewis: The summer after my freshman year, I decided to work the graveyard shift at the Hess gas station in my hometown. I essentially sat in a little sealed booth and smoked cigarettes all through the night. Either that, or my first job at McDonald’s when I was 16, or maybe being the busboy at the local diner where the owner told me to save the bread scrapes off people’s plates that were later used to make ‘home-made’ croutons and stuffing.

Joan Lobis Brown: Once I worked for a bank and it was an hour and a half drive each way, and I had to get there very early each morning. It was a time when jobs were scarce. I listened to Howard Stern each morning so that I would stay awake. To this day I credit him for saving my life.

Ricky Rhodes: Photographically, I used to assist for a photographer who was verbally abusive on set and would yell at and embarrass me in front of his clients. That was pretty bad and unnecessary, so I quickly stopped working for that photographer. I also used to work at a pet store inside of a mall — that was the worst.

Thomas Alleman: The last “real” job I had before becoming a professional photographer was in the San Mateo County Jail, where I was a “Prisoner’s Advocate.” Which means: when new guys were brought into the lock-up by the street cops from the different cities in the county, I’d interview them. I needed to find out about their family and social connections to the community and their living arrangements and their job histories in order to evaluate their “flight risk” in the event they got out of jail on bail. Would they return for their trials, or would they flee the state or country? If I felt strongly enough in their favor, I’d recommend to the arraigning judge that they receive free bail, which was called OR, which meant “own recognizance,” which meant that we simply accepted their promise that they’d return to court when the time came.

As you can imagine, that was a pretty fascinating job. But it was also really, really dreary, because, of course, I was doing that job in a jailhouse. And any experience one has in a jailhouse, no matter which side of the bars you’re on, is bound to be grim and depressing. But, most of all, I had to hang with the deputies there, who were either brand new grads from the Academy—unseasoned, overanxious newbies whose just wanted to kick ass on bad guys—or the old, worn out street cops, who were jaded and bitter. All in all, most of them were racist thugs who exploited their authority with cruel relish and made life very miserable for the drunks and lunkheads who came into the system.

I ran afoul of those guys my first day in the building, and spent the rest of my nine months there as the “sissy liberal” who coddled the “scum” in the cells. Every day for a long time, we hated each other openly, working at the same booking counter. Finally, those deputies just ran me out of the jail, physically. Which was a great blessing: since I’d been forced out of that nasty job “under duress,” I was eligible for generous unemployment benefits for six months, which allowed me to begin my freelance career in San Francisco, where I’d been living all that time.

Zed Nelson: Packing boxes in a warehouse. For a year.

Giles Clarke: The worst job I ever had was when I lived in Berlin in the mid-eighties.. I was an washer-up in an Italian restaurant. I clearly remember the day in 1985 when Liverpool were due to play Juventus in the European cup final.. There had been some friendly banter between the waiters and myself earlier in the day, but sadly, just before the game, the fans rioted in the stadium and thirty Juventus fans died. The Italian waiters came into kitchen later and were drunk and blaming the English hooligans etc… Not sure I said very much but they beat the shit out of me… Not a great job that one.

Rob Brulinski: Hands down, working at a women’s shoe store pretending to be Al Bundy. I’ve never sold a pair of shoes in my life! Women would ask “what would go well with this dress” and I’d say “check out Shoe City.” My boss would stand directly over me for hours while I design newsletters, basically making me the Mechanical Turk of Photoshop.

Patrick Brown: I trained as a tool marker, specialising in plastic injection moulds. I did a 4 year apprenticeship and quit after one week as a tradesmen – I wanted to get a tradesman wage. I’ve has some crappy jobs in the past. Here’s just a few: washing dishes, demolition work, cleaning cooling towers on mine sites, working in a multi-storey as a car park attendant on the doom gate. But I have also had some brilliant ones too: a set builder for the theatre, ballet, opera, and a like, lighting grip, prop’s maker, camera assistant, wardrobe, darkroom printer, making parts for a camera at a camera repair house, and finally a photographer’s assistant. Those are just the highlights.

Chloe Aftel: It hinges on how one defines “bad.” I’ve done some pretty shitty tasks for a multitude of bosses, from buying genital creams for one boss to creating and responding to another’s online dating profile. The list goes on. Those nightmare days and embarrassing tasks did teach me a ton about who I did not want to be.

Amy Lombard: In high school, I worked very briefly as a sales associate at a local upscale boutique in PA. Among other tunes, the owners would sing and dance to Fergalicious to impress customers. I think one time I showed up in chucks and they decided to dress me up in one of their leopard print ensembles. I wish I had a picture of it; I’m sure I looked like the most awkward person on the planet.

Julia Fullerton-Batten: I had a number of jobs as a student to pay my way through college. I served in bars and a delicatessen. After graduation, I worked as an assistant to professional photographers for five years. Undoubtedly there were times, hours, days, maybe even weeks that I didn’t like what I was doing, but in hindsight, I now realise that everything that I did then contributed a great deal to what I have achieved today. So the worst job that I can remember now as the most arduous and the most unrewarding was being asked to weed the garden as a teenager.

Henry Horenstein: Shoveling slivers of aluminum into a freight car in deep summer. 100 degrees plus.

Osamu Yokonami: I had a job in advertising but I have forgotten it because I am always thinking about the future.

Harold Feinstein: I really began as a photographer at the age of 15 and have been one all my life. When I was about that age, I did work at Neddick’s hot dogs stand at a train terminal in Brooklyn and was paid 65 cents an hour. It wasn’t a particularly enjoyable job, though I did like to serve people. They were always in a rush to get wherever they were going.

Noah Rabinowitz: I worked in a hardware store making minimum wage. That said, I loved it.

Paul Kwiatkowski: I worked as a bouncer at a nightclub in Boston. Dealing with drunk dorks going ape shit to club bangers on a nightly basis was harsh.

Natalie Keyssar: I waited tables on and off for years before I started working as a photographer. One of my biggest motivations to make it as a freelancer was to never ever have to do it again. That said, I think I learned a lot about multitasking, performing under pressure, and communicating with total strangers from waiting tables. I have a theory that a year of waitressing should be mandatory for everyone, sort of the way military service is in some countries- I think people would be a lot nicer if they all knew what that was like.

Chris Arnade: I worked on Wall Street as a trader for twenty years. Some would hate that, some would consider it an awful job. I enjoyed it, but found it lacking. Mostly a soul.

What’s the worst job you’ve had? Share your stories below in the comments section.