10 Devastatingly Beautiful Photographs from Wildlife Photographer of the Year 2014 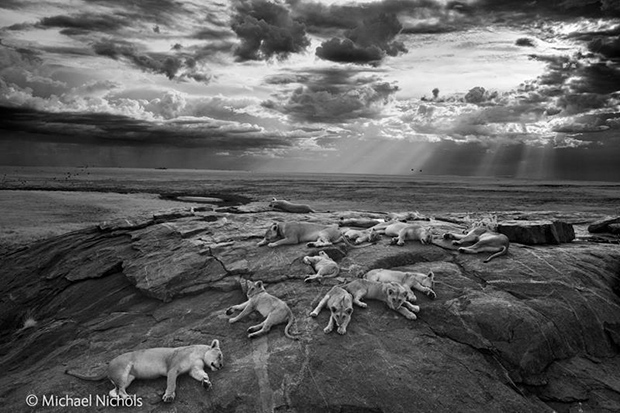 The last great picture Nick set out to create an archetypal image that would express both the essence of lions and how we visualize them – a picture of a time past, before lions were under such threat. Here, the five females of the Vumbi pride – a ‘formidable and spectacularly cooperative team’ – lie at rest with their cubs on a kopje (a rocky outcrop), in Tanzania’s Serengeti National Park. Nick got to know and love the Vumbi pride. A few months later, he heard that it had ventured into land beyond the park and that three females had been killed. © Michael ‘Nick’ Nichols / Wildlife Photographer of the Year 2014 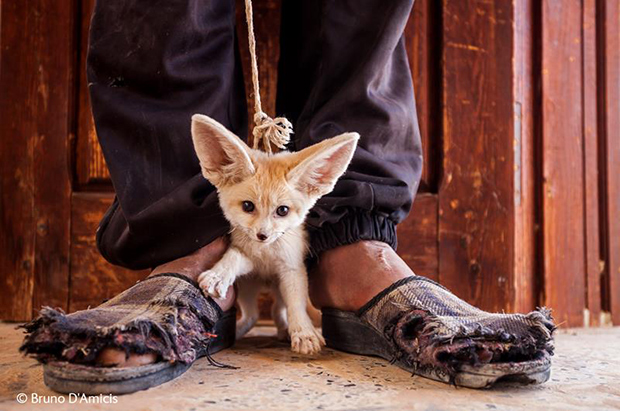 The price they pay A teenager from a village in southern Tunisia offers to sell a three-month-old fennec fox, one of a litter of pups he dug out of their den in the Sahara Desert. Catching or killing wild fennec foxes is illegal in Tunisia but widespread. Bruno discovered widespread wildlife exploitation, including hunting and capture for commercial trade and traditional medicine. He also discovered that the causes and therefore the solutions are complex and include high unemployment, poor education, lack of enforcement of conservation laws, ignorant tourists and tour companies, habitat destruction and the socio-political legacy of the ‘Arab Spring’ revolts. But Bruno is convinced that change is possible – that tourism has a part to play and that thought-provoking images can help raise awareness among tourists as well as highlight what’s happening to the fragile Sahara Desert environment. © Bruno D’Amicis / Wildlife Photographer of the Year 2014

As our human race continues to encroach upon and threaten the natural world that surrounds us, few genres carry as much weight as wildlife photography, and for 50 years, the Wildlife Photographer of the Year competition at London’s Natural History Museum has maintained its position as a leading international platform for imagery that transforms and enriches our perceptions of those creatures with whom we share our planet.

As the competition celebrates its 50th anniversary, it presents a traveling exhibition of 120 photographs by professional and aspiring photographers from around the world. This year’s competition welcomed more than 42,000 submissions from 96 countries, a testament to its astounding growth since its first year in 1965, which garnered 361 submissions. With the introduction new categories like People’s Choice, WPY Portfolio, and Time-lapse, the competition promises imagery that inspires delight, sorrow, and ultimately, action.

To capture these images, photographers braved harsh climates and even more threatening war zones, all in the name of preserving the legacy of our majestic yet vulnerable planet. Included in the competition is the Young Awards category, giving voice to the newest generation of passionate wildlife photographers. This year’s winner is 8-year-old Carlos Perez Naval from Spain, who captured a yellow scorpion brandishing his stinger. Michael ‘Nick’ Nichols from the USA takes home the grand adult title for his photograph of a pride of female lions with their cubs. The Wildlife Photographer of the Year exhibition is on view now until August 30, 2015 at London’s Natural History Museum.

Enter the next Wildlife Photographer of the Year Competition from 5 January 2015 – 26 February 2015, open to all professional, amateur and young photographers. 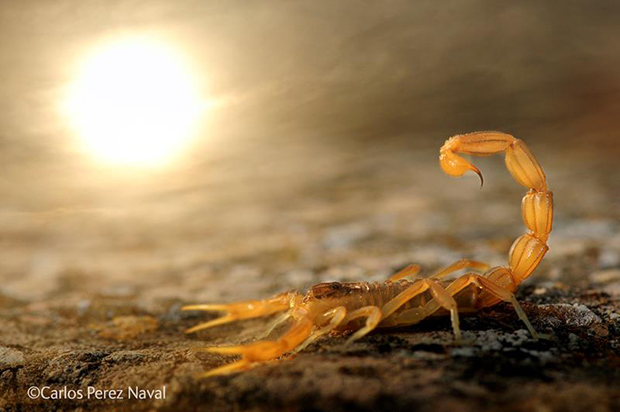 Stinger in the sun Aware of Carlos’s presence, the common yellow scorpion is flourishing its sting as a warning. Carlos had found it basking on a flat stone in a rocky area near his home in Torralba de los Sisones, northeast Spain. © Carlos Perez Naval / Wildlife Photographer of the Year 2014 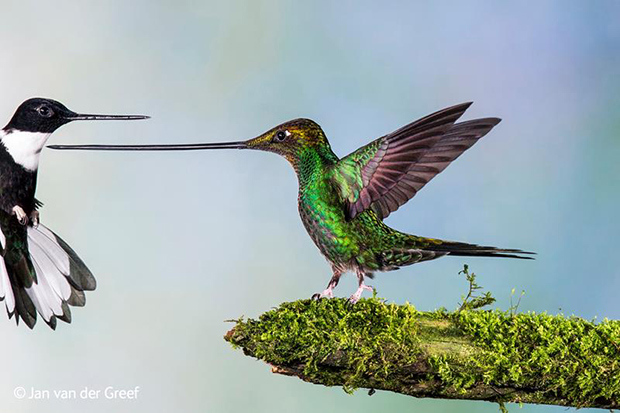 Touché A focus of Jan’s trip to Ecuador was the astonishing sword-billed hummingbird – the only bird with a bill longer than its body (excluding its tail). Its 11-centimetre (4.3-inch) bill is designed to reach nectar at the base of equally long tube-shaped flowers, but Jan discovered that it can have another use. One particular bird had a regular circuit through the forest, mapped out by its favourite red angel trumpet flowers and bird-feeders near Jan’s lodge. To get to the bird-feeders, it had to cross the territory of a fiercely territorial collared inca. Rather than being scared off, once or twice a day ‘it used its bill to make a statement.’ © Jan van der Greef / Wildlife Photographer of the Year 2014 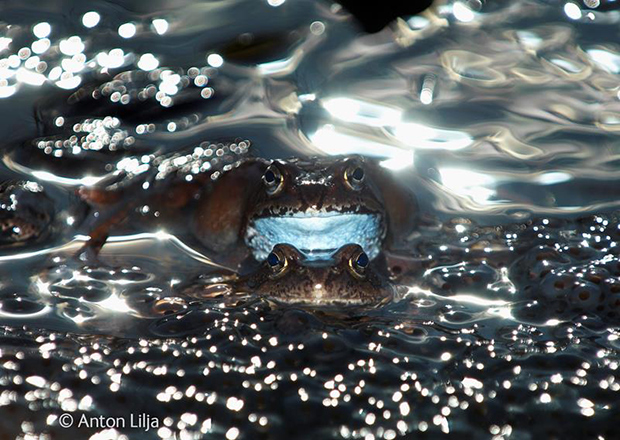 The long embrace The moment her eggs make contact with water, the jelly around them will begin to swell. So a female frog needs to have a male nearby, ready to fertilize the eggs the instant they leave her body. And a male needs to hold on to her to make sure he’s the one doing the fertilizing. So he grasps her in a tight embrace, known as amplexus, often for days, until she has laid her eggs. © Anton Lilja / Wildlife Photographer of the Year 2014 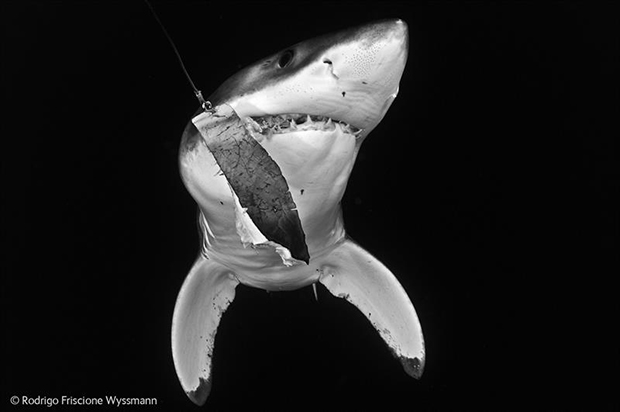 The longline lottery It had clearly been a monumental struggle: the young great white shark’s jaw jutted out at an ugly angle, evidence of how it had fought to escape from the hook before finally suffocating. Rodrigo came upon the grim sight off Magdalena Bay on the Pacific coast of Baja California, Mexico, after noticing that a fisherman’s buoy had been dragged below the surface by a considerable weight. The hook was on a long line of hooks, set to catch blue and mako sharks. ‘I was deeply shocked. Great whites are amazing, graceful and highly intelligent creatures. It was such a sad scene that I changed the image to black and white, which felt more dignified.’ Such surface?baited longlines may stretch for miles and are responsible for the deaths of tens of thousands of animals every year, many of them endangered. © Rodrigo Friscione Wyssmann / Wildlife Photographer of the Year 2014 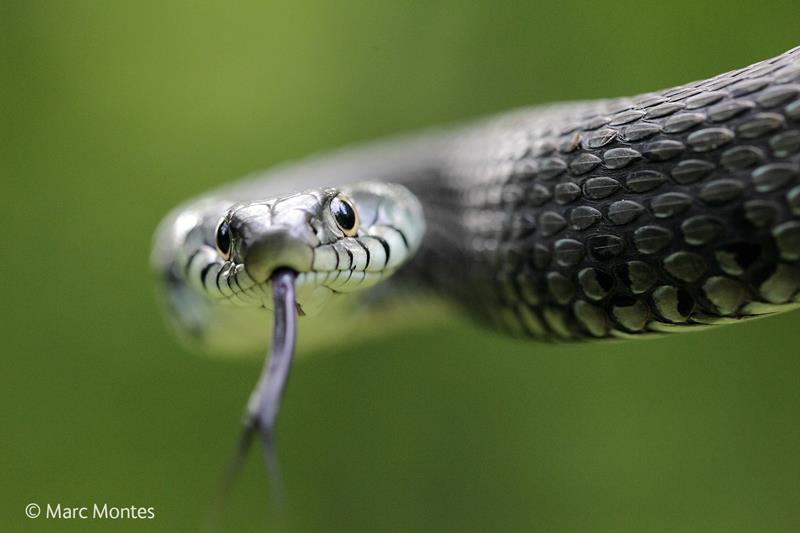 Snake-eyes Marc was trekking through the forest in the Val d’Aran, near his home in northern Spain – as usual, carrying his camera and keeping a lookout for animals – when he was thrilled to come across a large grass snake. ‘I have a great passion for reptiles, especially snakes,’ he says, ‘and it is rare to see this kind where I live.’ © Marc Montes / Wildlife Photographer of the Year 2014 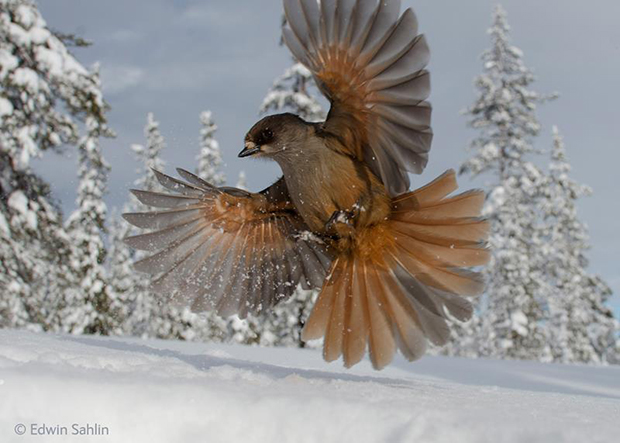 Snowbird Cheese and sausage are what Siberian jays like – so Edwin discovered on a skiing holiday with his family in northern Sweden. Whenever they stopped for lunch, he would photograph the birds that gathered in hope of scraps. On this occasion, while his family ate their sandwiches, Edwin dug a pit in the snow deep enough to climb into. He scattered titbits of food around the edge and then waited. To his delight, the jays flew right over him, allowing him to photograph them from below and capture the full rusty colours of their undersides more clearly than he had dared hope. © Edwin Sahlin / Wildlife Photographer of the Year 2014 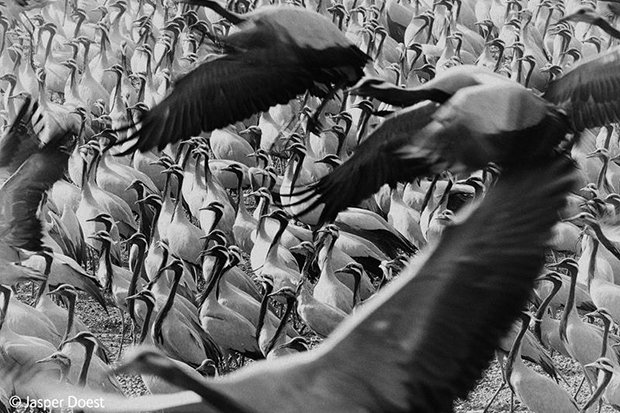 The elegant crowd Some years ago, the villagers of Khichan, in Rajasthan, India, started putting grain out for the few dozen birds that stopped over on migration from their breeding grounds in Eurasia. Now thousands visit and winter in the region. At dawn, Jasper would join crane conservationist Seva Ram on the roof of his house overlooking a large enclosure erected to protect feeding cranes from stray dogs. ‘Rows of Vs would come from every direction, the birds descending into the dunes. Once one had entered the enclosure, others would follow. Soon, it was filled with a sea of cranes, turning their heads in synchrony.’ © Jasper Doest / Wildlife Photographer of the Year 2014 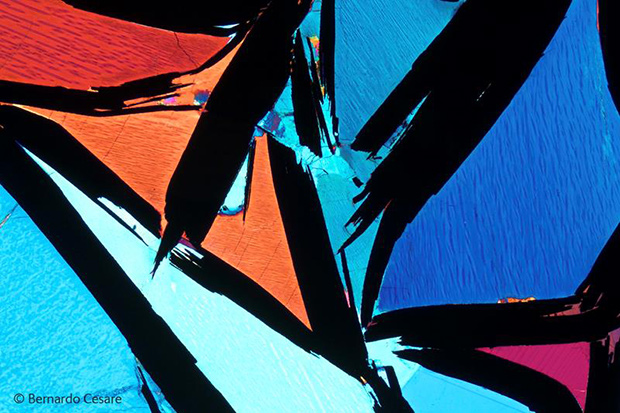 Kaleidoscope A geological event half a billion years ago, at extreme heat deep within the continental crust, gave rise to this crystal formation. The black mineral, appearing like lead frames in a stained-glass window, is graphite, traversing the colourful panels of quartz and feldspar. ‘My aim is to reveal the beauty of a small world that is normally accessible only to geologists’, Bernardo explains, ‘and through images such as this to tell the fascinating story of our planet.’ © Bernardo Cesare / Wildlife Photographer of the Year 2014