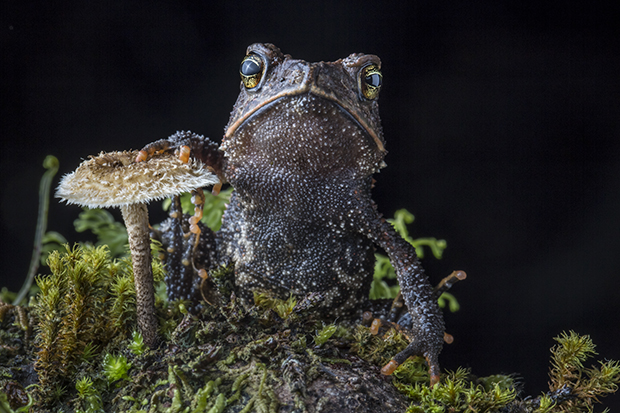 For In Search of Lost Frogs, photographer and conservationist Robin Moore embarked on a journey around the world in pursuit of some of the most elusive species of amphibians known to man, traveling everywhere from India to Haiti over the course of a few short months. Aided by 33 teams of researchers and over 120 scientists, Moore set out in hopes of rediscovering some of the frog, toad, and salamander species previously thought to be extinct.

For Moore, the expedition was one not only of critical inquiry but also of hope, motivated by his own affection for the creatures, who have in recent years been devastated by climate change, habitat loss, and the widespread and fatal chytrid fungus. He sought a total of ten species of amphibian, each critically endangered or thought to be wiped entirely from existence. Some had not been observed or documented for almost a century.

Moore risked dangerous situations for the sake of the frogs, entering conflict zones in Colombia and encountering various types of wild animals, but the venture ultimately paid off, and he discovered a couple new species in addition to rediscovering several creatures assumed to be lost. Amphibians rank among the most resilient species in the planet’s history, and yet they stand today in a state of acute vulnerability. As a crucial element of our global ecosystem, these frogs need our help. To get involved, please visit Rainforest Trust, Amphibian Survival Alliance, and Conservation Internation.

In this particular image, Moore captures a Cuchumatan Golden Toad living in northwestern mountains of Guatemala. He encountered the critter in July while looking for several salamander species native to the mountain, learning that the toad had been discovered for the first time in the last few years.