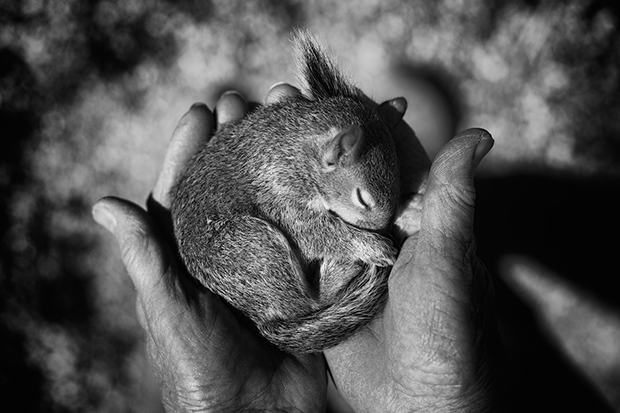 In early September of this year, I discovered a baby squirrel on the side of the road. With unopened eyes and just a downy layer of fur, she was unable to fend for herself. I picked her up and carried her in my hands to the nearest vet’s office, her small snout burrowing into my skin in search of food.

After the veterinary clinic and a nearby wildlife reserve refused to take her, I eventually got in touch with a local wildlife rehabber, who took her in, nursing her with puppy milk and heavy cream before setting her on a warm heating pad. Over the course of my check-ins with the rehabber, I learned much about the squirrel. She was female, one to two weeks old, and her mother had probably been in the process of moving her when she was hit by a car. Soon, more squirrels came to live with her, and a week or so later, I was told that although my squirrel had definitely survived, she was now indistinguishable from her fellows.

For wildlife rehabbers, every season brings with it a new group of squirrel pups in need, with cars colliding with mother squirrels and landscapers chopping down trees containing nests. Effingham, Illinois-based photographer Tytia Habing encountered one such pup in her parents’ yard. After rescuing him from the family dog, she felt a frisson of hope when she inspected him and discovered that he had no visible wounds. Soon after, he passed away from internal injuries.

As part of her project The Gift, a series documenting both the preciousness and fragility of the natural world, Habing captured the squirrel in the moment following his death. Under her lens, no creature goes unnoticed, each small critter cherished for his or her gentle spirit. Here, the infant squirrel is allowed a final resting place beneath her lens, cradled and mourned by the family that discovered him. Says Habing, “He looks so peaceful, like he’s sleeping in my moms hands.”

If you find a creature in need in your area, please visit Wildlife Rehabber to find a rehabber nearby.