‘Fifty Shrinks’: A Fascinating Look Inside the Offices of Dozens of NYC Therapists 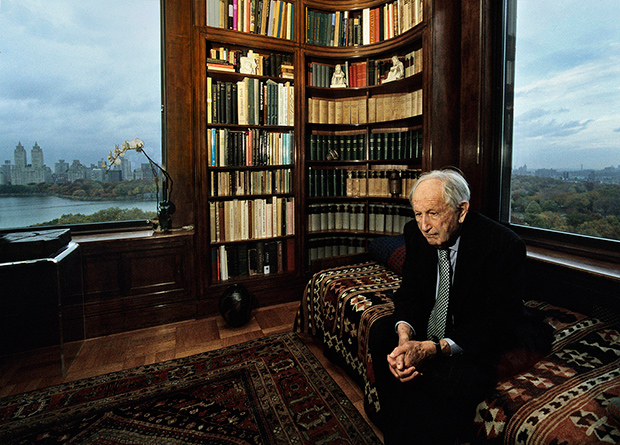 “… I have been an analyst for more than fifty years and I still find it astonishing that every patient has something new to communicate. Sometimes I’ll encounter a patient who has so much new to say that it’s bewildering. It is as if any analyst is living not only his own life, but also the lives of countless other people. So I think I am making a bargain with Death. I am cheating. I am living more than one life.” — Marin Bergmann, PhD 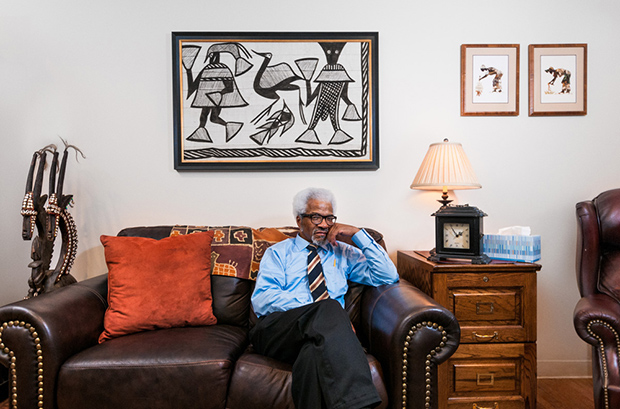 “… My taste is for African art that comes from my Afro-centric perspective. That’s a part of who I am. If a white analyst puts African art in her office, it is perceived as nothing more than her having good taste. For me, as an African American, when I choose to display African art, it is interpreted differently, more personally, as an aspect of my identity, which is also true. I can imagine that to some new black patients, their first reaction might be” ‘I want to get out of here. This guy has his black self right up front and out there. I don’t want to deal with the black part of myself. I’d rather go to a white analyst.’ In a way, I’m challenging those patients to respond. It opens the dialogue where I can say, ‘okay let’s see what we can do with that response,’ and then the real therapeutic work can begin…” — Kirkland C. Vaughns, PhD

For Fifty Shrinks, New York City-based photographer and psychiatrist Sebastian Zimmermann shot dozens of therapists and psychoanalysts standing or seated within their private offices. The seedling ideas for the project began to take root as Zimmermann built his own practice in Upper West Side Manhattan, where he observed within himself a sense of remoteness from the outside world. While his patients shared with him intimate portions of themselves, the role of psychiatrist necessitated a detached and discrete existence.

For Zimmermann, the remedy for the psychiatrist’s exile was the photographer’s inquiry. As soon as he began capturing the offices of his friends and peers, word spread and his own position within the city’s network of mental health professionals opened doors that would otherwise have remained closed. For the artist, his psychiatric training lent itself to portraiture in the sense that both required careful attention to the barely perceptible psychological rhythms of his fellows. Where therapists mostly cast their gaze outwards, here they become the vulnerable objects of our own, their evanescent anxieties and idiosyncrasies unveiled for a single precious instant.

The offices and their often peculiar furnishings play a key role within each of Zimmermann’s frames, evidencing countless untold tales of psychic injury and catharsis. Each is designed, of course, as a safe space, sequestered from the myriad triggers that linger outside its walls. While these rooms house the most acute moments in the lives of many of their visitors, they are first and foremost the established homesteads of their resident psychologists, who return day after day to face the challenges ahead.

Fifty Shrinks is available on Amazon and on his website. Join the photographer for a book launch on Monday, November 10 from 6-7:30pm at The Corner Bookstore in New York City located at 1313 Madison Avenue (corner of 93rd Street), New York, NY. Sebastian Zimmermann and some of the therapists featured in the book will be in attendance to sign copies of the book. 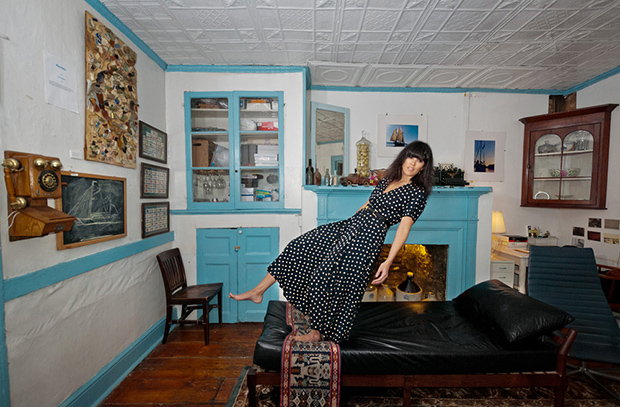 “… We all are falling, wrote Rilke in his poem ‘Autumn,’ leaving us with a final question: Is there one whose gentle hands will hold up all this falling? This is one of the most powerful questions addressed to psychoanalysts by their patients, as it was addressed to the priests before, in a time when the Creator was these hands thought to hold all. What answer can the psychoanalyst give, this strange silent creature born somewhere between the passing of a religious age and the era of secular science?” — Jamieson Webster, PhD 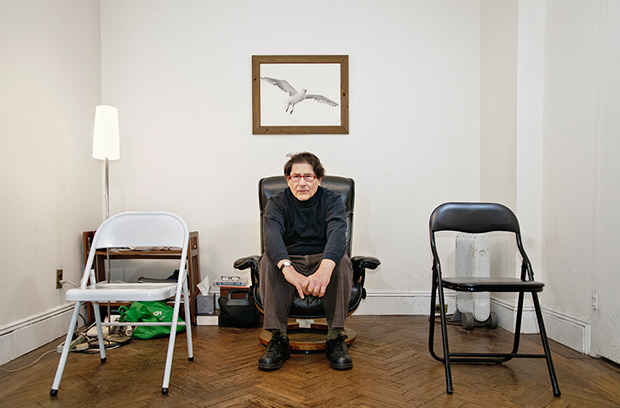 “… Space fades away. There are patients who may start off picking bones with this or that part of my office and why it is that way and what it means about me. One said it was like being in her psychotic mother’s insides and she could not stay and work with me. Another found something wrong with the chair and felt if I could not care for a chair, how could I care for him? Most seem to go to another space once the session unfolds. Sessions can be magical; mood is everything, transforming inner and outer surroundings. Feeling takes precedence and creates worlds of its own…” — Michael Eigen, PhD 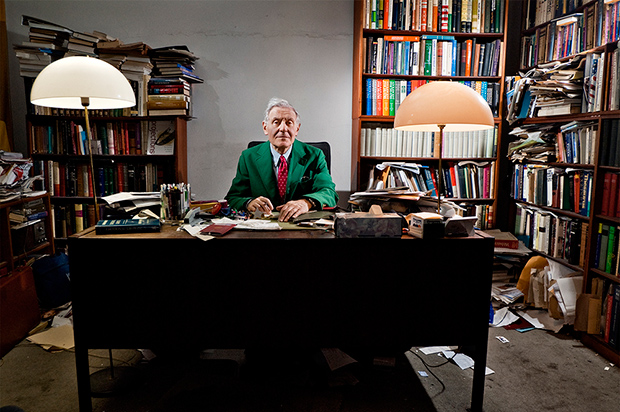 “… In the early 1970s, before Roe versus Wade, obstetricians started to refer women who needed to get abortions. It was all pretty secretive with only a few hospitals willing to do the procedure. One of the ways for a woman to obtain an abortion legally was to be suicidal. I had to assess if she was in real danger. Was the woman depressed and overwhelmed? She she have an intent or plan to kill herself? What was her social situation? What were her life stressors?” — Bertram Rosen, MD 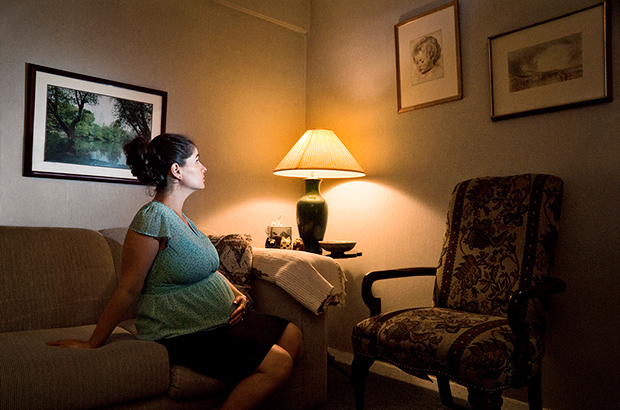 “…When I realized I was visibly pregnant, I faced several dilemmas. The first decision was figuring out whether to tell my patients and if so, when. I was starting to show and I felt that my baby was already in the room. Not to volunteer the information to my patients felt like a denial of what was already happening. I didn’t feel comfortable with that. So I decided to tell them despite the code of non-disclosure that therapists normally abide…” — Dayna Kurtz, LCSW 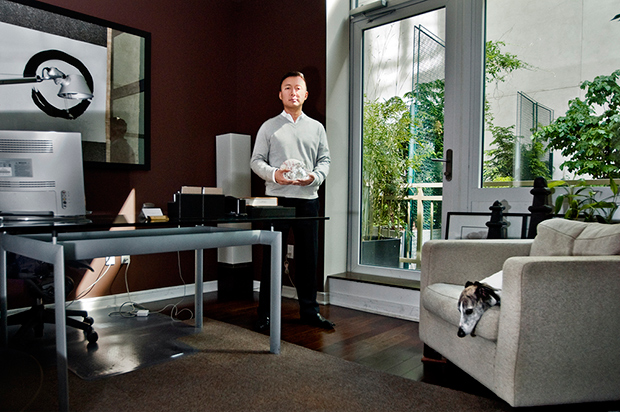 “…During my training, I had a depressed patient who had relapsed several times on cocaine. One of my supervisors told me that I couldn’t help him until he was serious about staying clean. But he failed to understand that this patient was already serious about staying clean. That’s why he had come in to tell me that he had started to use again. He needed more treatment, not dismissal. Seeing addiction as not from high blood pressure; let me replace frustration with patience. And I’vve found that just like people with high blood pressure, addicts really do get better…” —Steven Lee, MD 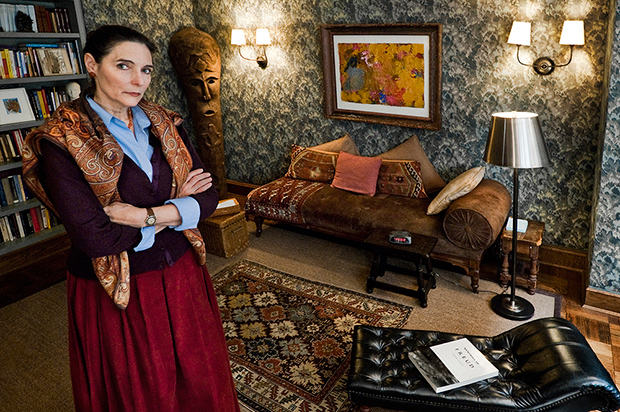 “… Over time, I found that I was especially intrigued by working therapeutically with individuals going through separation and divorce. You’re going to be triggered very frequently by a lot of things that are going on during a divorce or separation when people are highly activated. You need to know yourself and where you are coming from. Without my own analysis, it would be very difficult for me to do this kind of work. When people separate, they often think their lives will never be as good again. I inspire them to see that, although it feels terrifying, change can make their lives better in the long run…” — Kate Bar-Turn, LCSW, FIPA 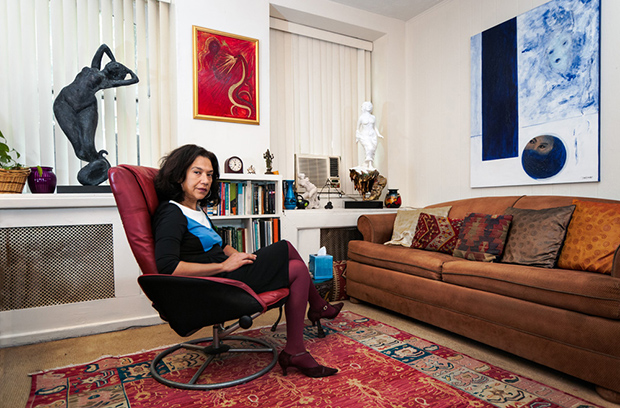 “Upon returning to New York from a visit to the Jung Institute of Zurich, I had a series of dreams of a woman entwined with serpents that I interpreted as a portent of my need for self-transformation. This corresponds with Jung’s own interpretation of snakes as the harbingers of change. In one of my dreams, a voice commanded me to sculpt these images. I had never before made anything in clay but I listened to my unconscious and have continued to create art to this day. I keep several examples in my office of both my sculptures and paintings…” —Maria Taveras, LCSW