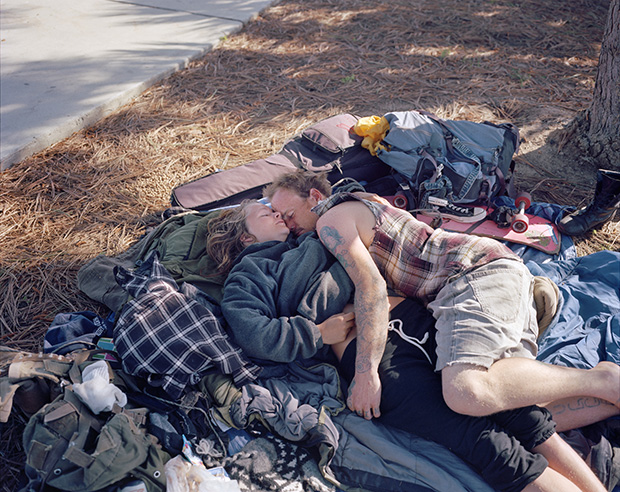 Karina and Tex, from Canada and Las Vegas – a couple who met on the road, cuddle one early morning in a park where they camped out for the night. Karina had been traveling for an extended period across Canada then into the US and was continuing on toward Mexico and South America. 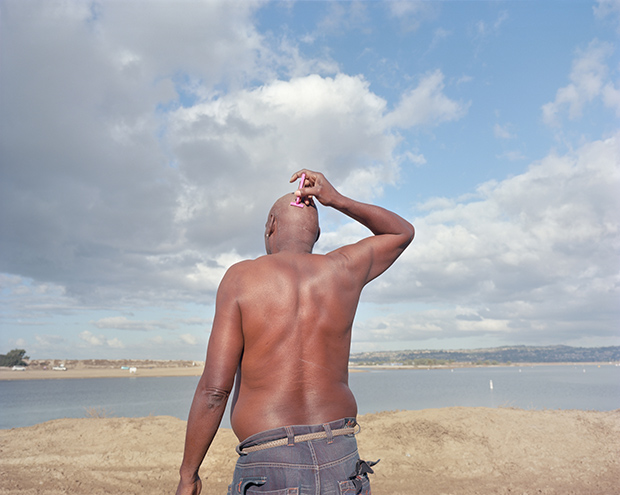 Cliff, from Michigan shaves his head near the bay. Cliff was in the military and now lives in San Diego out of his RV. 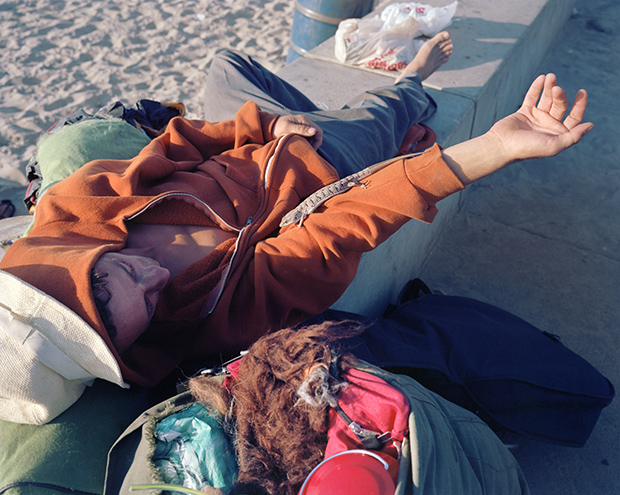 Randall, from Texas – rests on the boardwalk wall with his lizard. He began his road journey a few months earlier by hitchhiking into a Midwestern blizzard.

For California Winter, Los Angeles-based photographer John Francis Peters enters the ephemeral community of drifters flocking to sunny San Diego in winter, documenting the temporary homes they erect along the oceanfront parks. Throughout the cold, snowy months from November to March, the waves beckon to carloads of spiritual travelers, runaway kids, and enduring nomads, all of whom have shed the confines of a traditional home life for the freedom of the open road.

For many of Peters’s subjects, San Diego is just one stop along a long and continuous path throughout the country. As city tourism declines in the colder months, the artist explains, law enforcement relaxes its hold on the traveling population, allowing secluded portions of the urban landscape to become dotted with sleeping bags, lived-in vans, and rest areas carved out of the natural scenery. The network of travelers is in a constant state of transition, with new visitors arriving as others leave.

Through the course of shooting these individuals’ winter passage through San Diego, Peters connected with many of them more closely, listening as they shared fragments of their transitory lives. Ranging from hardened veterans to idealistic kids, some of his subjects are driven by the endless possibilities of the road untraveled, while others have made their way to San Diego in search of something specific and elusive, an estranged family member or long-ago memories buried within the sandy shores.

Despite the romance of nomadic living, Peter’s portrait of San Diego drifters is at times marked by heartache and loss. Drugs maintain their grip on much of the population, imbuing the idyllic landscape with a potent sense of danger and apprehension. Here, personal security is never promised, yet even in the face of instability, San Diego emerges under Peters’s gaze as an unlikely sanctuary. Bathed in the light of early morning or shadowed by the falling sun, his fatigued subjects are caught in quiet moments of rest, holding fast to the few precious instants that proceed the difficult road ahead. 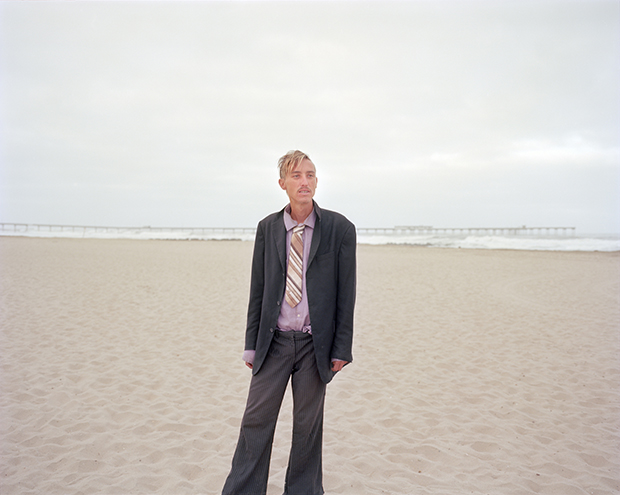 Jordan, from Northern California – made his way to San Diego on a hippie bus with a group he met at Slab City in the California desert. The bus stopped in San Diego for a few days to re-fuel before heading on to Baja California. 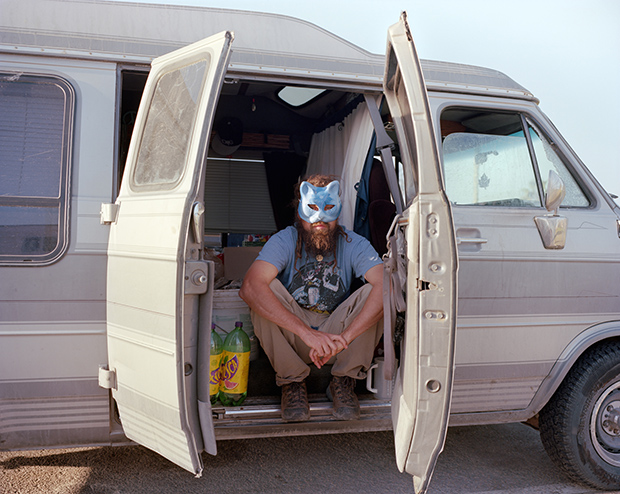 Nick, from Colorado – sits in his van that he lives out of. 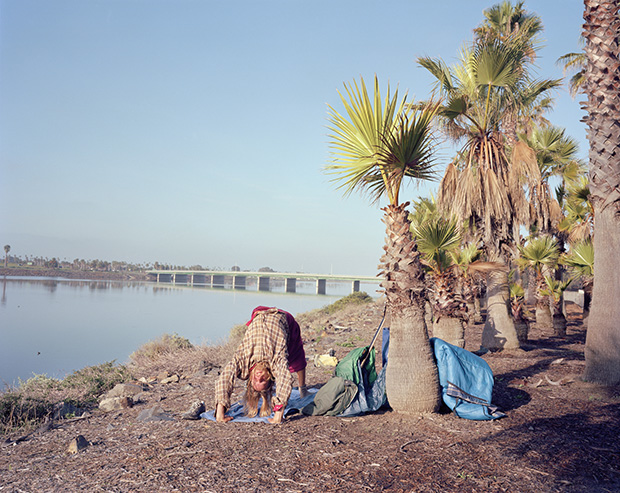 Madua, from Philadelphia – has been traveling for over two years. He originally left Philly when he started to become disconnected from his community of friends – as some gravitated toward more conservative lifestyles and others toward drug and alcohol addiction – he decided to move toward a more spiritual life path. In this image he practices yoga during the morning hours along the San Diego River. He has setup camp in this more removed location to avoid the drug and other criminal activity that is common around the populated beach areas. 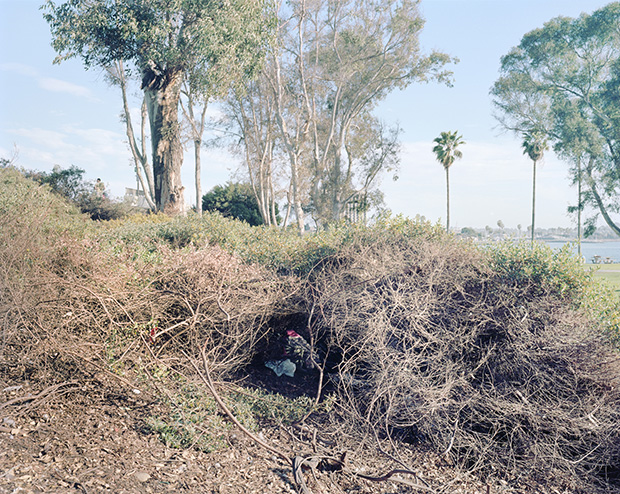 Many travelers who end up living on the street have to find makeshift shelter within the environment. In this image, a shelter is made within a low-lying bush in a park near the bay and hotels. The more hidden the shelter is the better – to avoid police, criminals and to hide personal belongings. 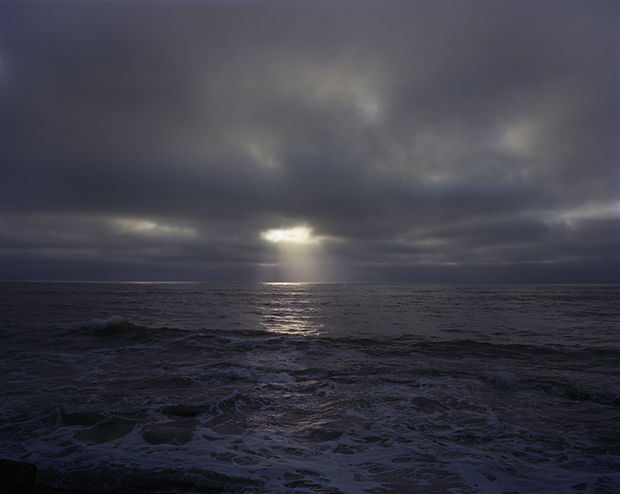 A view of the Pacific Ocean during sunset. 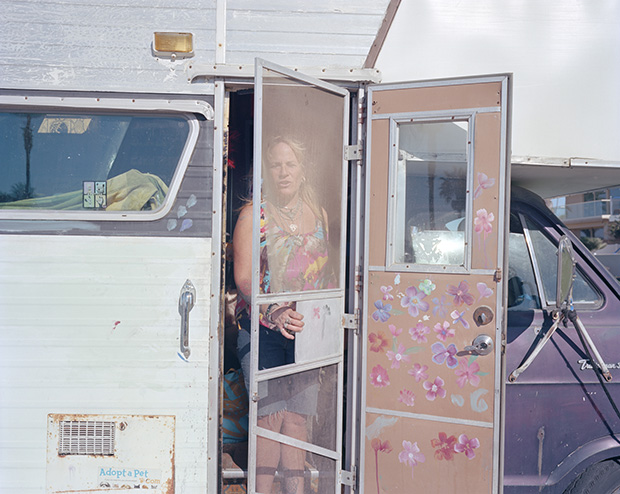 Terry, originally from upstate New York – stands in the door of her camper van. “There are a lot more homeless kids here now than ever before. I don’t know why. I just know a lot of these kids hitchhike out, leave home and they wind up here because they can’t go any further. Some of them that I know are like “well I came out for the rainbow gathering” or like they went to Oregon and wound up here because it’s as far southwest as you can go. Its like they just land, like they jump in somebody’s car hitchhiking or whatever and they wind up here. 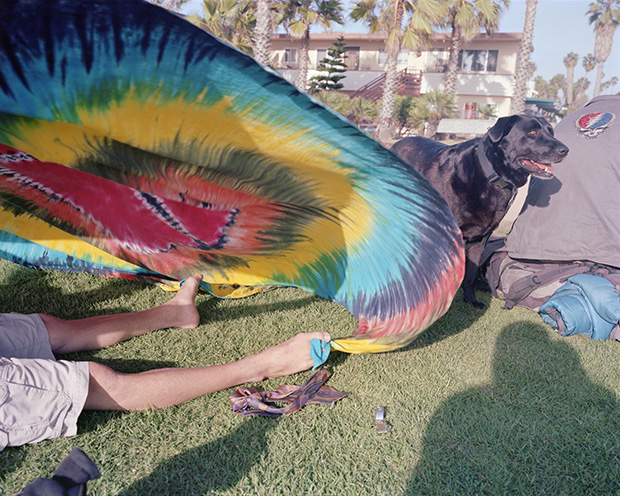 Kids and dogs hang out at a campsite one afternoon. 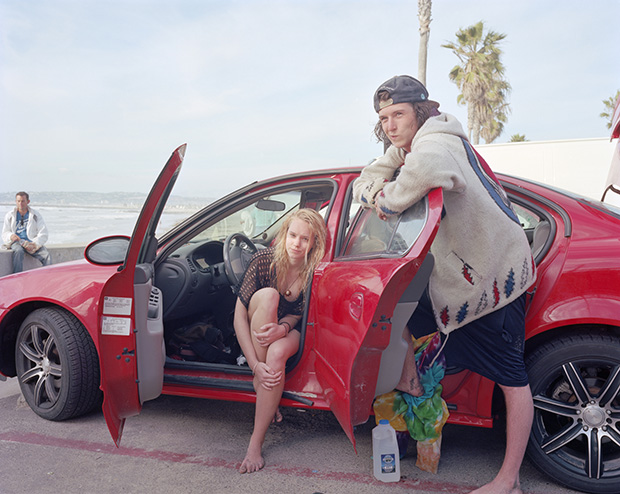 Moglie and Lo, from Detroit – hang out in their car near the boardwalk. They had been anxious to leave the Detroit area for many years and wanted to see more of the country to consider other places to live. Moglie and Lo play music together, sometimes on the street to make money and have stayed in a few cities including Las Vegas where they met a guy who told them San Diego would be a great place to stay for a bit, “We were in Las Vegas and we ran into this kid CC. He let us kick shit at his apt for a couple days. We slept there and he helped us make some money on the street playing music and whatnot. He told us when we get to San Diego we have to go to Ocean Beach. You’ll find family there, great kids, and you’ll get taken care of.” 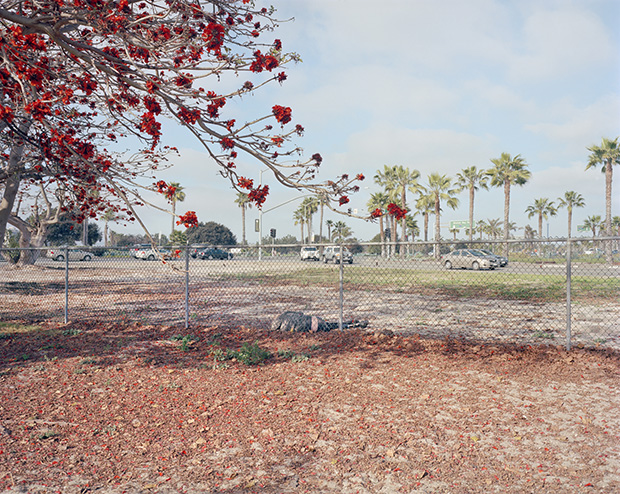 Ray, from Ohio – sleeps in a park next to a highway junction after panhandling during the morning rush hour. 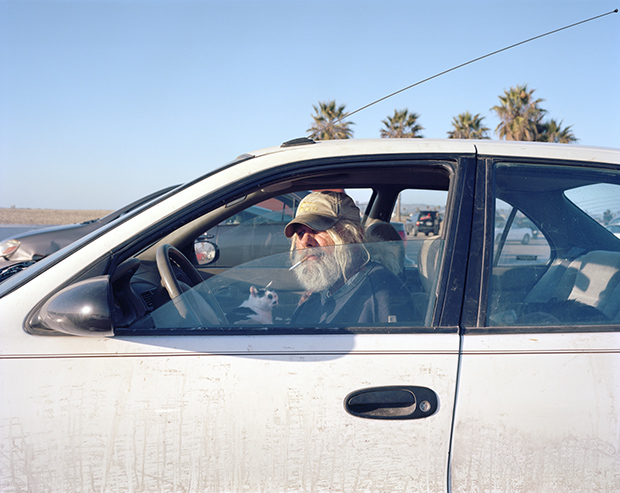 Rick recently arrived from Arizona. He lives with his wife on the road and makes money by finding and selling rare stones. 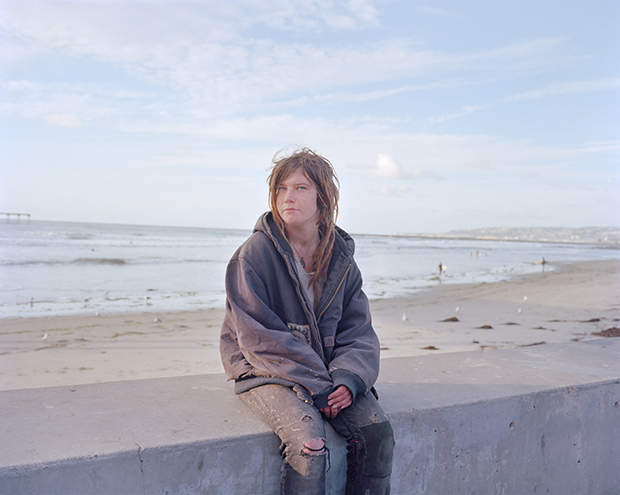 Stella from Oregon hangs out on the boardwalk wall. 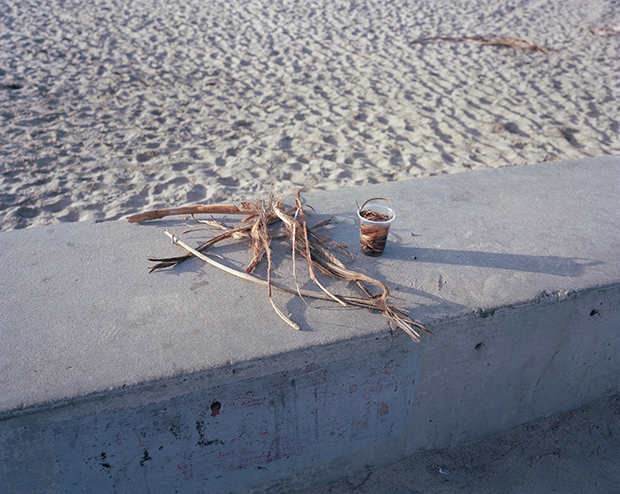 Shreds of tree bark and a plastic cup left on the boardwalk wall by a group of travelers. 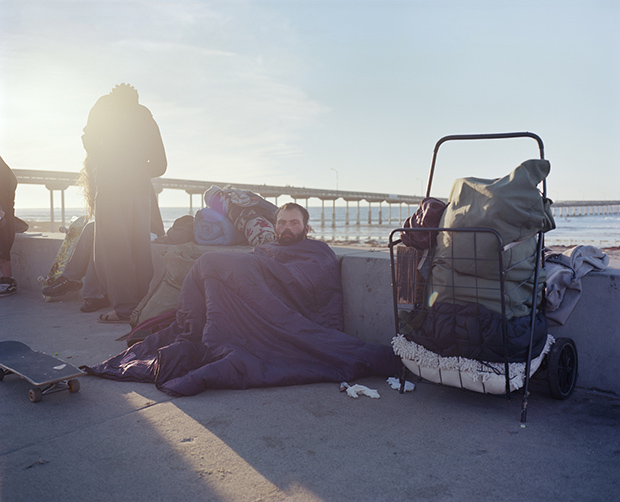 Mike, who is originally from New Jersey – wakes up along the boardwalk early one cool December morning. 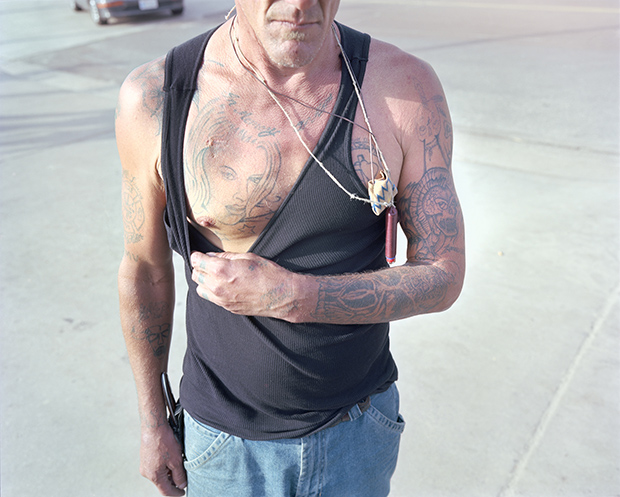 Roy, originally from Brooklyn, NY – shows a tattoo of his late girlfriend. 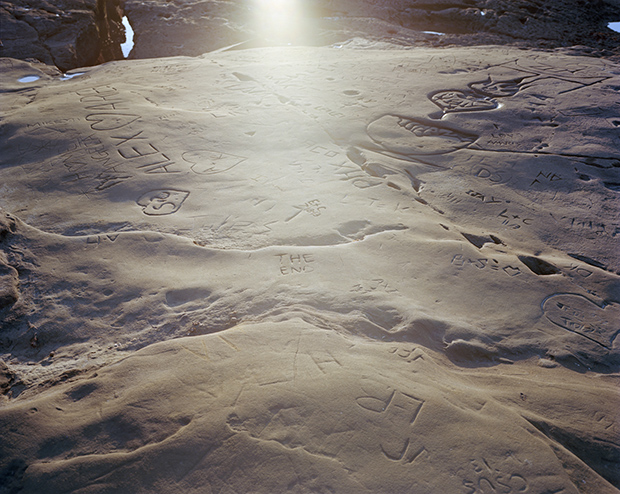 Graffiti etched into sand stone cliffs along the ocean. 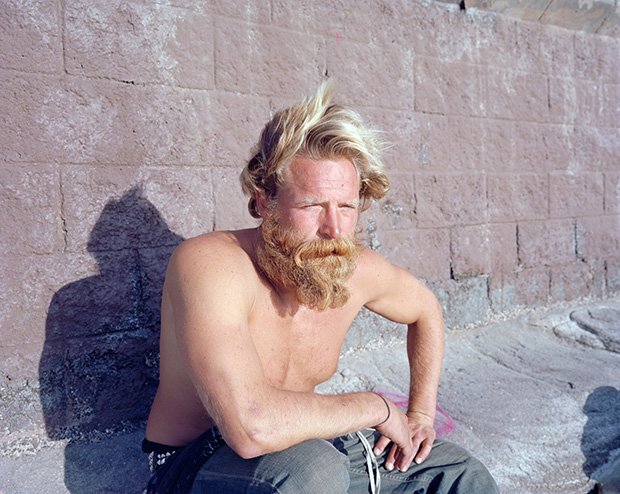 Oden looks out toward the ocean view. 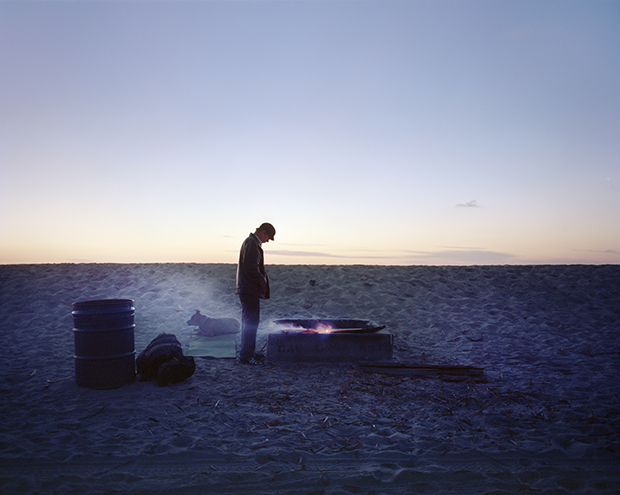 Chi, from Illinois – prepares a beach fire to cook hotdogs for fellow hungry travelers and drifters. “I’ll stay in San Diego until I start sweating at night. And then I’ll move north.”