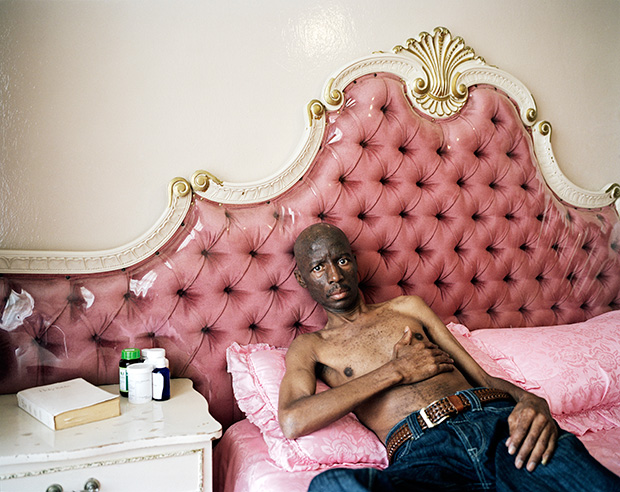 Mahlomola William Melato rests during the heat of the day at his home in Oppenheimer Park. Since being diag- nosed with silicosis, Mahlomola’s weight dropped from 80 kg to 49 kg. He suffered from shortness of breath, a debilitating cough, general body weakness and discoloration of the skin. 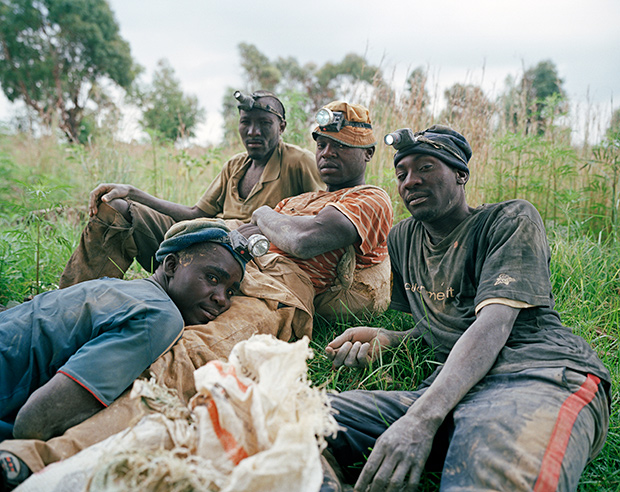 Linda Ndlovu, Daniel Mandlo, Dumisani Mahlangu and Calvin Sibanda rest after a full night of work in a disused underground gold mine shaft. The men are highly skilled informal diggers with many years of experience. They are seen as ‘brave men’ and ‘heroes’ by the local community and are respected for their ability to pinpoint the gold- bearing deposits. They are commonly confronted by criminals, who beat them and rob them of clothes, mining equipment and money.

For Legacy of the Mine, photographer Ilan Godfrey explores the human cost South Africa’s monolithic mining industry, tracing the threads of exploitation and oppression that run through the country’s lucrative mineral trade.

Pivotal in the nation’s emergence as a global industrial leader, the diamond, coal, and gold mines carry with them a grim history of environmental devastation and personal suffering. In exchange for barely livable wages, which are determined by the amount of mineral extracted, work in the mines carries with it the threat of fatal diseases like tuberculosis, silicosis, asbestosis, and radiation. Under the instruction of Zimbabwean “Kingpins,” illegal miners make their descent into the mines for months at a time, in danger of injured or killed by unstable shafts. In the surrounding areas, households are plagued by ailments brought on by air and water pollution.

In his portrait of the mines, Godfrey merges the iconic with the everyday, presenting neighborhood children playing alongside makeshift graveyards commemorating the victims of police violence and conflict in the mines. Here, the troubled history of the mine continues to color every facet of life both private and political, casting its influence over an uncertain national—and global— future. We spoke to Godfrey about the project. 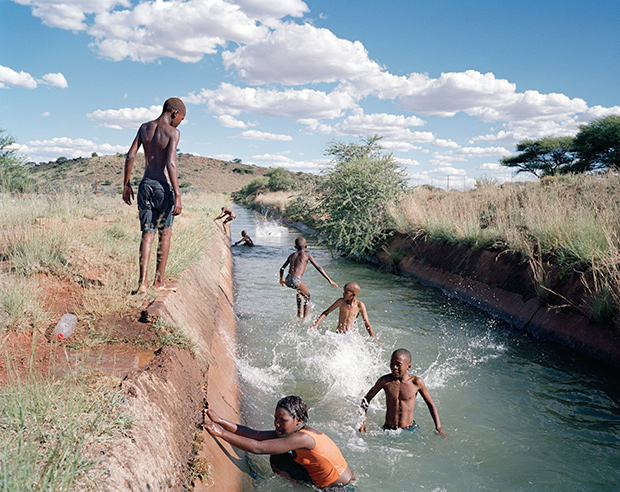 The suburb of Diamanthoogte (‘Diamond Heights’) is home to a community that lives on the outskirts of the diamond-mining town of Koffiefontein in the Free State province. During the summer months children enjoy swimming in the canals, which they refer to as the ‘Long Sea’. After diamonds were discovered here, Koffiefontein developed into a mining town. The mine has been closed several times over the years but continues to recover some of the most valuable diamonds in the world.

How did you find out about the mines and what was your inspiration for this project?
“The series Legacy of the Mine unfolded after my attention was drawn a number of years earlier to the environmental implications and historical and current social aspects of the gold mining industry in and around Johannesburg. This was also supported with the fact that I had grown up in these surroundings and felt a longing to explore them further.

“It became clear as the project progressed that my subjects did not always directly reflect the legacy of mining-based pollution; rather, the concept of ‘the mine’ became a thread that helped me frame my work. I was originally drawn to the way in which mining had revealed the impact of its legacy on the environment, but my experiences soon revealed something deeper.

“‘The mine’, irrespective of the particular minerals extracted, is central in understanding societal change across the country and evidently comparable to mining concerns around the world. This enabled me to channel my conception of ‘the mine’ into visual representations that gave agency to these forgotten communities” 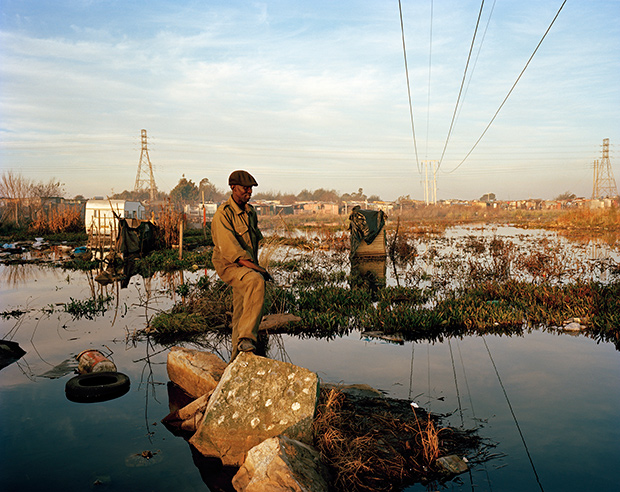 Jeffrey Ramiruti looks out over a stretch of water that has flooded a large part of the Tudor Shaft informal settlement. The settlement is built on top of mine tailings and is surrounded by land contaminated by mining activities and radioactive dumps, which expose the inhabitants to radiation and dust inhalation. After eight years of lobbying, thousands of residents of Tudor Shaft are in the process of being relocated to safe land.

What are some of the specific costs and health concerns resulting from mine labor?
“There were various issues affecting miners that I felt needed to be addressed and documented in detail. A particular concern was with regard to their health and the compensation there after once a miner was diagnosed with various occupational diseases such as silicosis or asbestosis.

“The late Mahlomola William Melato always comes to mind, a man I have great admiration for. In 1986 Mahlomola began an apprenticeship at the Harmony Gold Mine in Welkom as a boilermaker. After completing his apprenticeship in 1990, he became a teacher but returned to the mining industry in 2007. In 2008 he was diagnosed with tuberculosis and in 2010 with silicosis, previously known as miner’s phthisis, and was laid off from his job. He said, ‘Young men who started on the mine as an apprentice did not know the risk of TB and silicosis. If I knew the risks involved I would not have worked in the mines.’

“Though he signed a Medical Incapacity Agreement with Harmony Gold Mining Company, which stipulated that if he became medically incapacitated he must be given an alternative position as well as medical assistance, [but] neither had been provided in Mahlomola’s case. Mahlomola died at home on the 22 May 2013, and was buried on 1 June.

“Mahlomola William Melato’s story is representative of so many men just like him [who] leave their family and home, traveling long distances to the city in search of work often finding they have little choice but to join mining operations.” 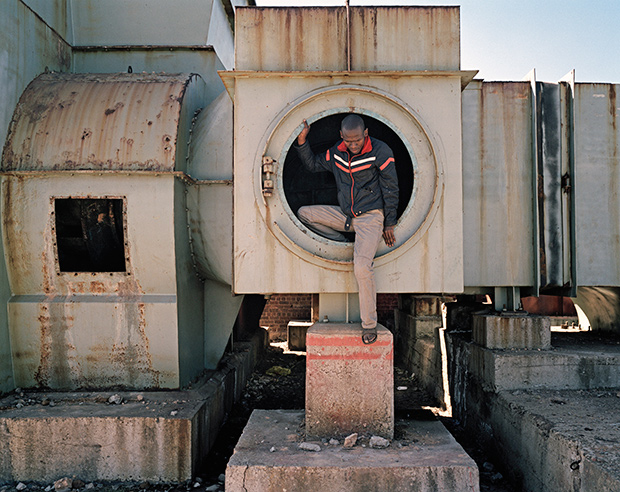 Sandile Dlamini, 24, lives in the Payneville squatter camp in Springs. Sandile showed me an unoperational ventilation shaft, ‘No. 8,” which is used by illegal miners as an access to Grootvlei Mine. Sandile says, “Men have fallen to their death trying to climb into this shaft.” He adds, “The conditions are unbearable and you can stay underground for six months to a year and only come up for food when it runs out.”

How have the mines influenced the surrounding social climate?
“The environmental and social impacts of mining bring with them major risks. Benefits are not always equitably shared, and local communities closest to the source of the mineral development can suffer the most. Mines do provide jobs in economically marginal areas but the opportunities are limited. Communities that come to depend on mining to sustain their economies are especially vulnerable to negative social impacts when the mine closes.

“Alex Salang, a 32-year-old community activist who lives in Mmaditlhokwa Township, Marikana, voices his concerns. ‘If the mine closes, I am not sure what we are going to do as a community. We cannot then create farming activities, this land is covered in damaged soil, and no vegetation can grow here. Farming should be the future in South Africa, it is rotating, it is sustainable.’ Alex goes onto further describe that there is massive unemployment and lack of development, poverty is rife, underage pregnancy and substance abuse is common. ‘Can you hear the noise? That is the mine. We cannot sleep at night; we have commitments in the morning. Just hear, just hear, it is the ventilation and plant operation activity, the milling. We live like hell.’” 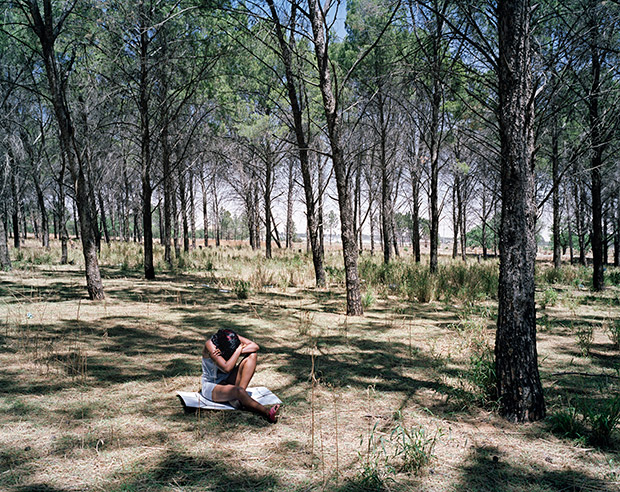 Hidden away in the bush and trees that grow near the mine dumps in the gold mining town of Welkom, Mpho lies in wait for her next client. She is 25 and works as a prostitute. She says, ‘I came to South Africa to find work. My clients are white men from town, mineworkers and Zama-Zama informal diggers.’ Many [of Mpho’s colleagues] have been raped at gunpoint, robbed of their money and cellphones, and beaten. One of Mpho’s colleagues says, ‘We are not safe. We try our whole level best to do everything we can to survive in life, because we are struggling.’ 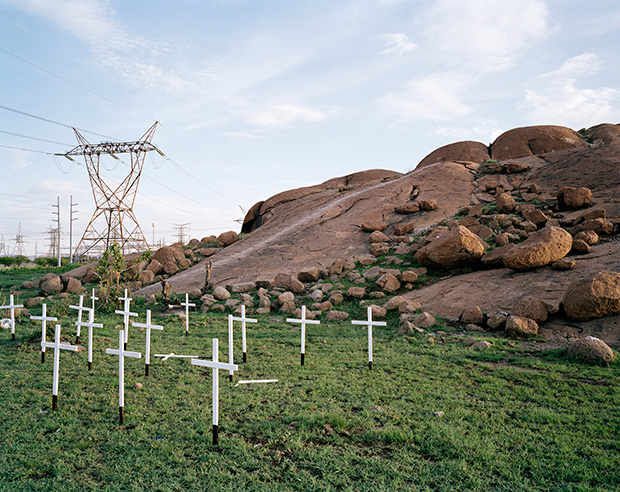 Thirty-four white wooden crosses symbolise the slaying of the Lonmin miners at the Koppies in Marikana by the South African police on 16 August 2012.

What is a typical day in the life of a mineworker?
“I did not endeavor to photograph men and women at work in the mines and, even though I went underground to witness the physical hardships these miners are confronted with day in and day out, the process of mining was not of interest.

“These processes and daily responsibilities are a well-documented subject and so I made a conscious decision to focus on the peripheries of the mining industry, the hidden untold stories.
Approximately 6000 officially listed derelict and abandoned mines lie dormant across South Africa, five times higher than the number of operational mines. Within these margins an illegal industry goes un-noticed. ‘Informal miners,’ who are referred to as Zama-Zamas, undertake back-breaking work, risking death deep underground in abandoned mine shafts or on the mine dumps that litter the surface.” 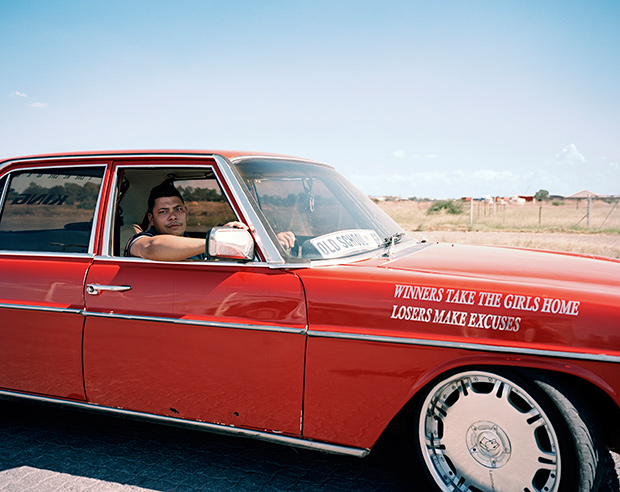 “King G” was born and grew up in Kimberley and now lives in the suburb of Homestead. There was a time when he made a living from buying and selling diamonds from informal diamond diggers in the area. A diamond digger from the Colville area says, “The buyers come and see us, we cannot go to their houses, they check the diamond at the car, we are pleased we get something to eat and maybe buy groceries for the kids or something to wear. Our children went to school this morning without a little coffee or bread.”

Is there anything being done to mitigate the problems caused by the mines?
“The law is playing a pivotal role in representing the voiceless when going up against the might of the mine. For example in December 2012, Richard Spoor, a South African activist and human rights attorney, filed a class action against 30 gold mining companies on behalf of tens of thousands of mineworkers who have contracted silicosis. It is estimated that one in four gold miners in South Africa suffers from silicosis.

“The platinum industry in the North West has been fraught with controversy of late, as the labour unrest at Marikana attests, with the longest labour strike in the history of South Africa coming to an end earlier this year. Not only does Marikana focus attention on the need to restructure the cheap labour migrant system but it has also highlighted the ongoing health risks miners face during employment and the meagre compensational benefits awarded to them once employment has ended. Wildcat strikes, invariably the desperate measures of miners simply wanting to improve their wages and living conditions, are nothing new in South Africa.”

Ilan Godfrey is a winner of the 2014 POPCAP prize for African photography and will be exhibiting throughout the world this fall. Legacy of the Mine is available here. Follow Godfrey on Instagram and Twitter. 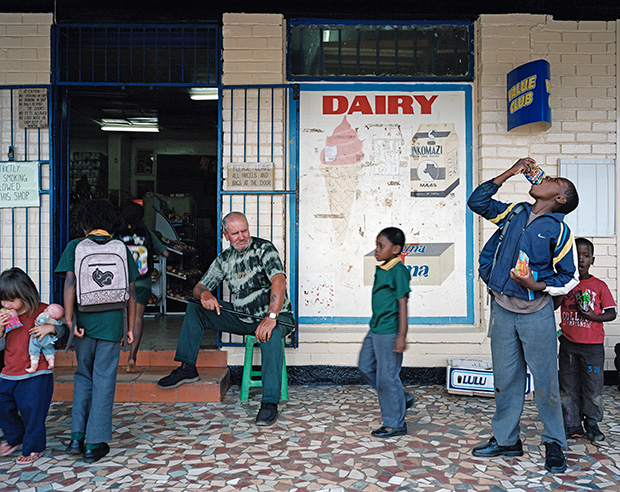 In addition to the Witwatersrand, gold was also discovered in ‘Black Reef’, which runs along the banks of the Klip River, a tributary of the Vaal. The town of Meyerton was officially proclaimed on 6 June 1891. It now has a population of 12,000. 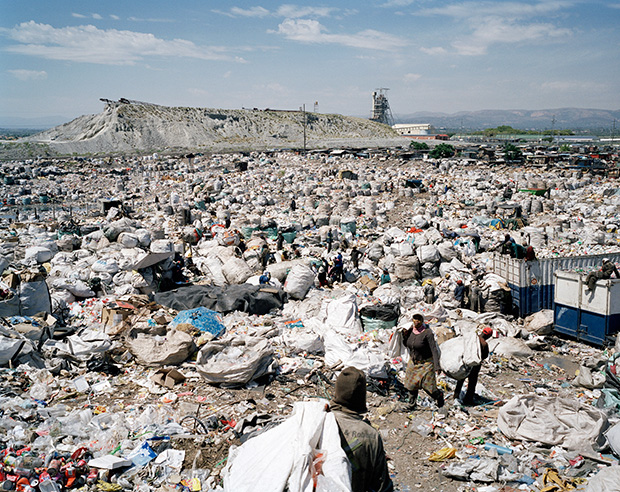 On 15 January 2013, it was announced that Anglo American Platinum (Amplats) had made plans to restructure its operations in the face of rising production costs and poor platinum prices. This would result in the retrenchment of 14,000 employees, 13,000 of whom are located in the Rustenburg platinum belt. The ANC and the unions have met this restructuring with fierce resistance. Negotiations are underway between the company and the unions, including the National Union of Mineworkers, the Association of Mineworkers and Con- struction Union, the National Union of Metalworkers of South Africa, and the United Association of South Africa.