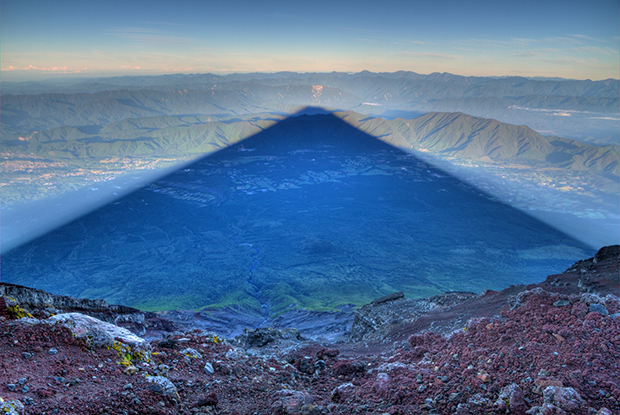 Photographer Kris J B, or Kris J. Boorman, has climbed Japan’s 12,380 foot Mount Fuji four times, each with the dream of capturing the perfect shot. On his third trek, he documented the shadow of the mountain extending to the West over the rocky landscape, but the image was not exactly what he was looking for, so he returned on year later for the final time before retuning home to the United Kingdom, preserving his memory of Japan in one arresting photograph.

Here, Boorman captures the spiritual significance of the mountain, which according to native Shinto belief, is a sacred space. The sunrise at Mount Fuji is so remarkable that it goes by its own name, the Goraiko. Blanketing an estimated 19 miles of land, Boorman’s sharp-edged pyramidal shadow, caught in an ideal moment as the sun ascends overhead, seems to contain within it all the mystical and ethereal forces of the legendary peak itself.

Since its online posting, Boorman’s shadow shot has become a viral phenomenon, leaving him vulnerable to rights violations; the image is frequently used and distributed without his permission or credit. Of the roughly 200,000 annual climbers to ascend to the summit of Mount Fuji, Boorman offers a unique and stunning perspective on the timeless and iconic peak. Follow Boorman on Facebook for the chance to win a free print.

Via Colossal and National Geographic