‘Postcards from Pine Bluff’: The Story of a Southern City in Decline 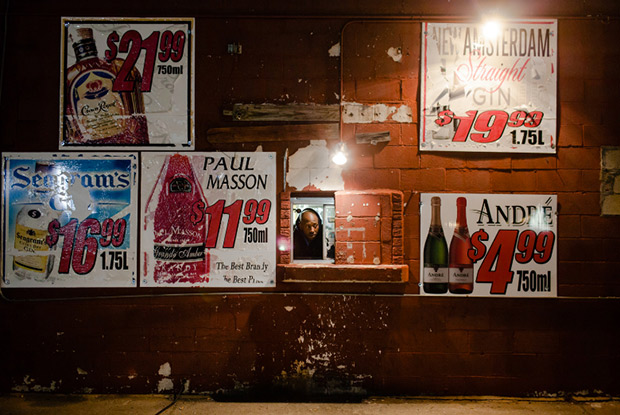 Kareem Bearden works the night shift at a drive-thru liquor store on the outskirts of Pine Bluff. Mr. Bearden moved to town a few years ago from Milwaukee, Wisconsin when a friend opened the store.

“Things quiet now, cause people are broke, but come the first of the month, thing’ll be jumpin’.” 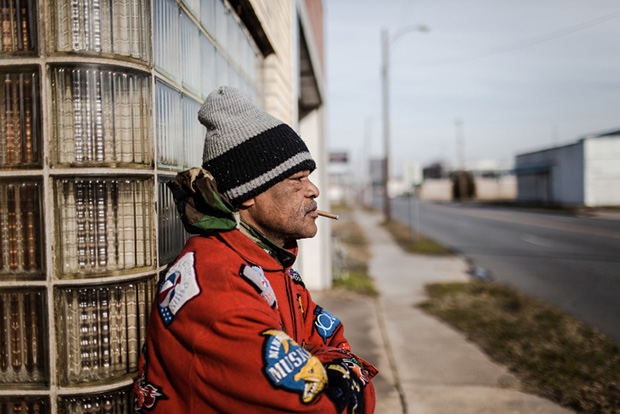 “About 45 minutes south of Little Rock, things have come undone.”

It is with this statement that William Widmer introduces us to Pine Bluff, Arkansas, a small city of just under 50,000 now infamous for its poverty and crime. The area was once a major epicenter for agriculture and industry in the South. However like many blue collar cities in the United States, Pine Bluff has deteriorated into abandoned local businesses and empty factory buildings that once lined the Arkansas River. As the population continues to drop, crime rates rise, the city ranking second only to Detroit for violence. In 2012, Pine Bluff recorded 18 murders, seven times the national average per capita.

Widmer documents the region at a significant crossroads. In 2013, a new mayor declared a five-point plan to reduce violence and give aid to the failing school systems and economy. The landscape feels exhausted and its people in a quiet meditation of just getting by. Despite the circumstances, Widmer notes a continual belief in community and history among the town’s residents. Postcards from Pine Bluff is full of decay, but also an enduring hope for a city in threat of extinction. 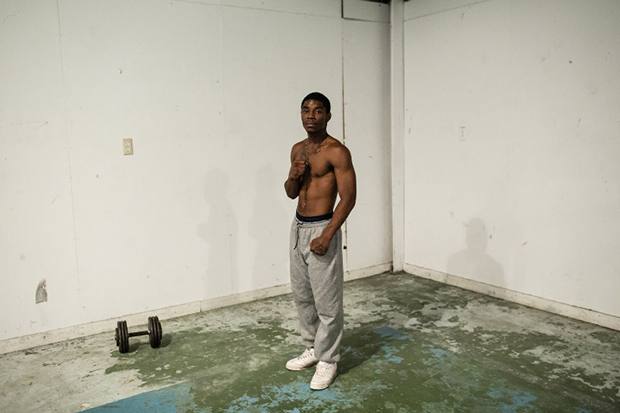 Quincy Means is a professional boxer who was the youngest to fight in the National Golden Gloves events at age 16. He is a native of Pine Bluff and trains at the Pine Bluff Boxing Club attached to Merrill Center, an after school drop-in center for local youth ages 5-17. 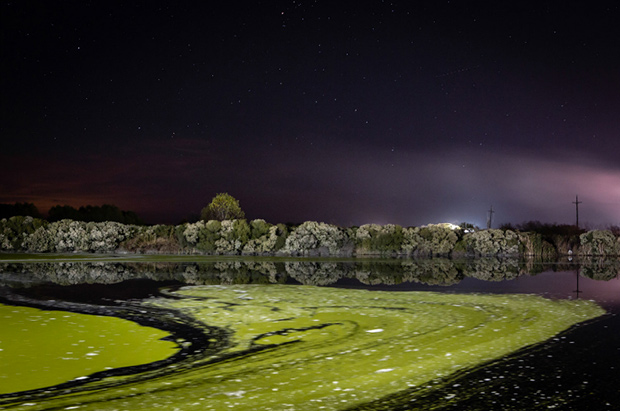 Algae bloom covers much of a drainage canal near Pine Bluff Energy Center and the Cal-Pine factory, one the last remaining paper mills in a town that was largely built on a fading manufacturing economy. 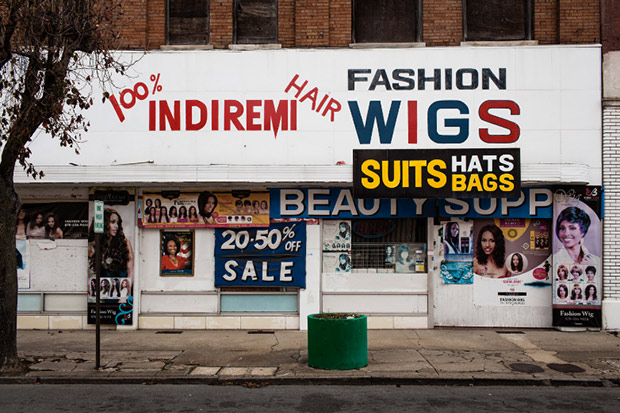 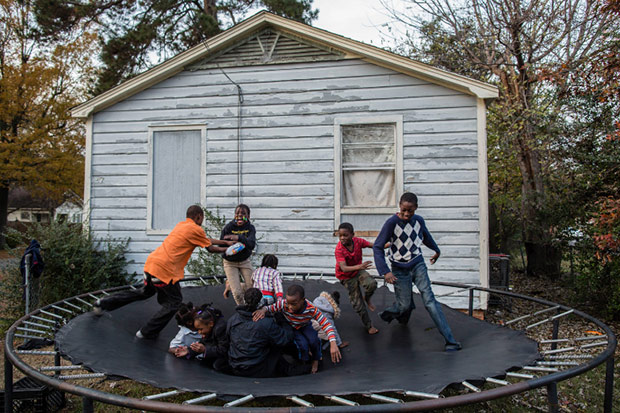 Children play on a trampoline in the small back yard of a house in downtown Pine Bluff. 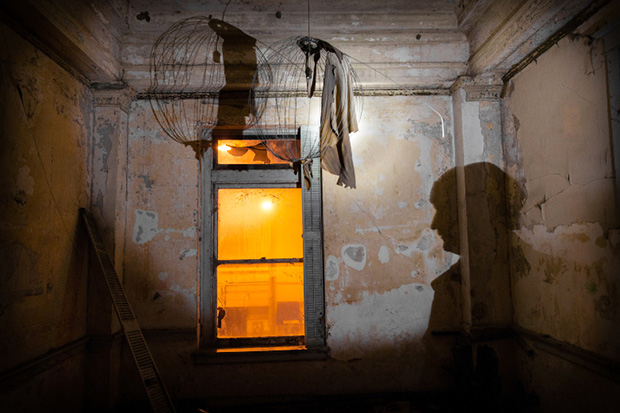 When it opened in 1913, the Hotel Pines was regarded as one of the finest hotels in Arkansas. It was conceived and built to attract more business to the section of Main Street that lies to the south of the city’s railroad tracks, and was the location of society balls and dances, banquets, and business and civic meetings. The hotel was listed on the National Register of Historic Places on August 10, 1979. Since 2008, it has been unoccupied and fallen into severe disrepair. 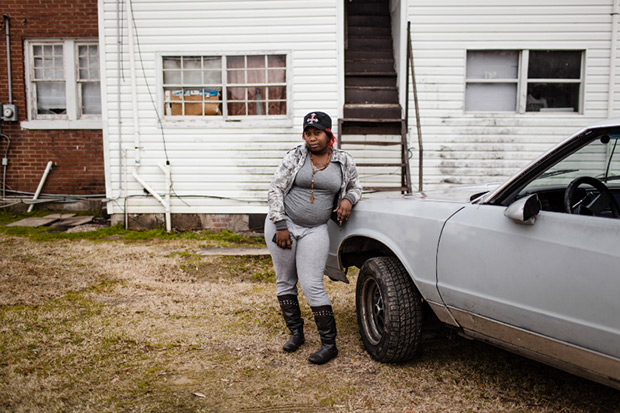 Nicole “Mia” Mitchell stands next to a friend’s car near downtown Pine Bluff. In the face of soaring crime rates and a persistent economic downturn, Pine Bluff has been dubbed the most dangerous little towns in America. 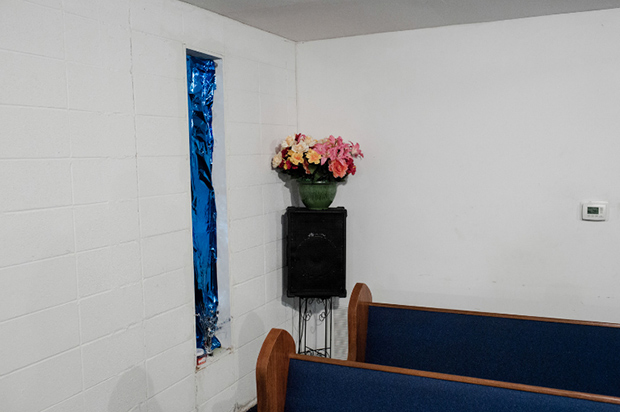 Empty pews at the New Bethel #1 Outreach Ministry church in Pine Bluff. The church holds a weekly food drive to collect goods for residents in need. 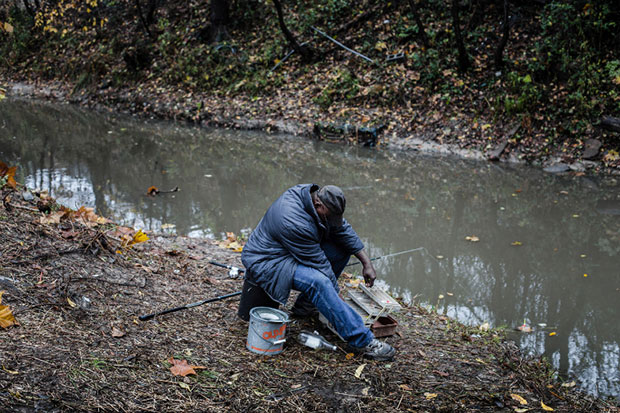 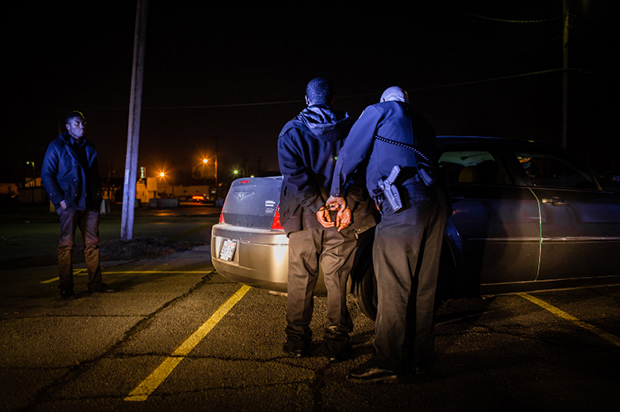 Officer Joseph O’Neal (L) watches a Patrol Officer Robert Henderson make an arrest at the end of Main Street in downtown Pine Bluff. Officer O’Neal was off duty for the evening but was listening to his police radio and decided to drive over to the site of the arrest once drugs were discovered in the suspect’s car. 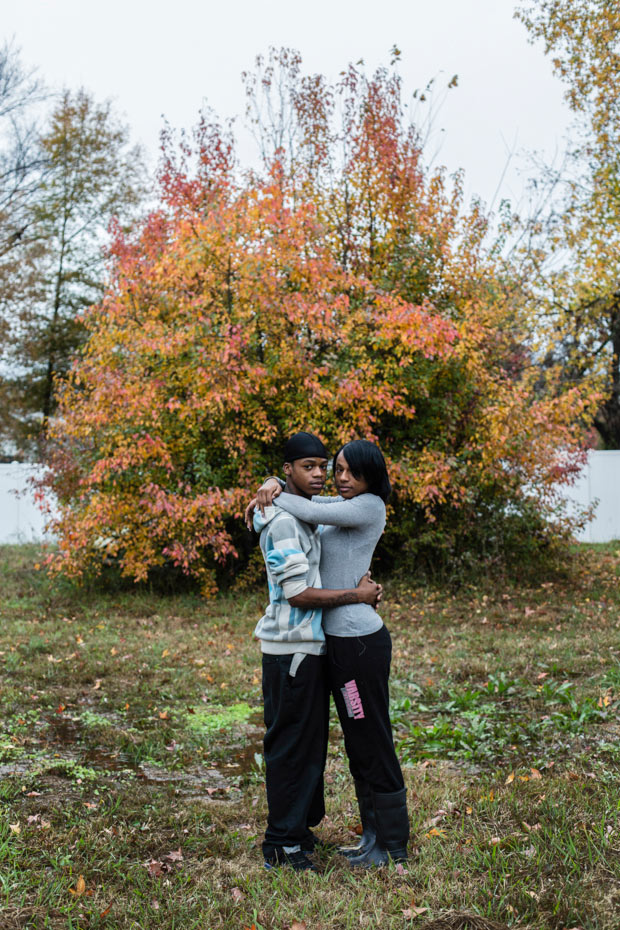 Deshay Geans and his girlfriend Tatiana Tolbert embrace in an empty lot in Pine Bluff. 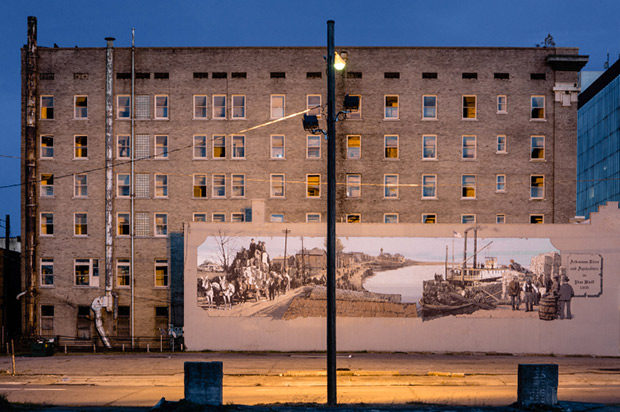 An abandoned building is host to one of the historical murals that appear on several building along Main Street in downtown Pine Bluff. 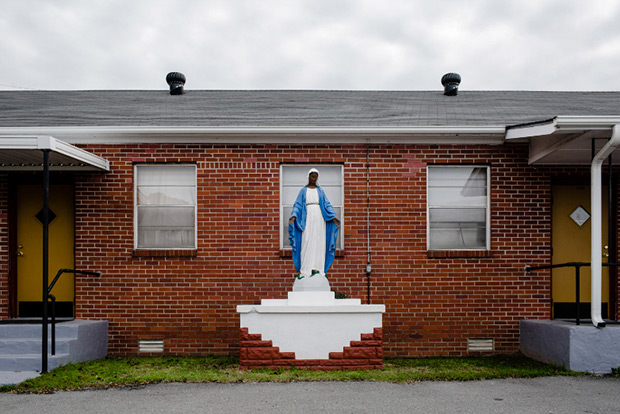 A statue of the Virgin Mary stands outside the St. Peter Catholic Church near Main Street in downtown Pine Bluff.