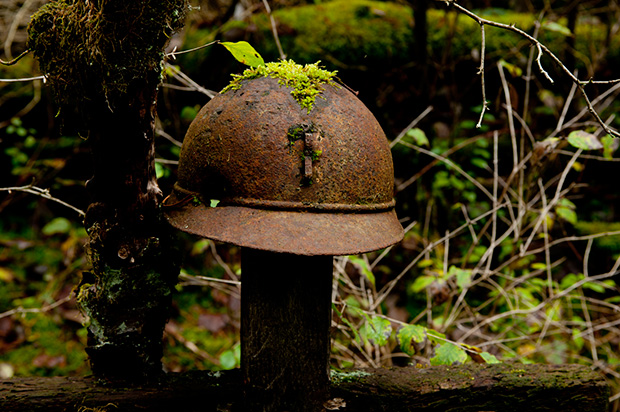 Soldier’s grave Champagne: This helmet atop a wooden cross marking the the battlefield grave of a French poilu Edouard Ivaldi is the last such marker anywhere on the Western Front. 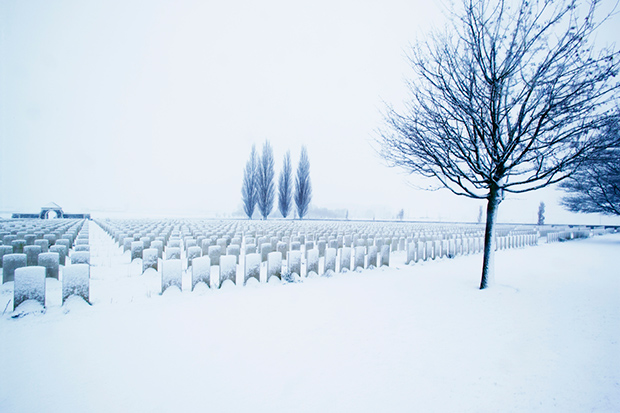 Tyne Cot: The largest Commonwealth War Graves Cemetery in the world with almost 12,000 graves and a memorial to another 35,000 men with unknown graves.
“I have many times asked myself whether there can be more potent advocates of peace upon earth through the years to come than this massed multitude of silent witnesses to the desolation of war” King George V during a visit in 1922

One hundred summers ago this year, the First World War began, setting of a chain of battles that would claim some 16 million lives over the course of four years. For Fields of Battle, Lands of Peace 14-18, photographer Michael St Maur Sheil returns to the Western front, cataloguing its landscapes as they exist today. In contrast to the vast majority World War I photographs picturing renowned generals and bloodied soldiers black and white, Sheil presents a topography healed in part by the passage time and a century’s growth of verdure.

Though lush and luminous, the countryside reveals itself to be irrevocably scarred by events long past; deep trenches and unexploded yet fatally dangerous shells form pocks over the terrain, reminding us of those tragic things which cannot be erased in time. Extending from Swiss territory to the North Sea, this now peaceful Western Front saw the deaths of approximately 8 million young men and millions of horses over the course of a four year stalemate between the French and German troops. New technologies like poisonous gas, tanks, and aircraft allowed for unparalleled fatalities.

Somehow, in all the needless violence, the young soldiers yearned for hope. In a small cathedral, men placed roses in empty german shell cases in celebration of Christmas. In the midst of slaughter, they played soccer. From a helmet and a wooden cross, a father built a grave for his son after the close of the war in 1919. Here, Sheil uses photography, often used during the war to gauge enemy positions, to heal by exploration a wounded yet resilient landscape that continues to haunt our collective consciousness.

Fields of Battle, Lands of Peace 14-18 is a free public street exhibition commemorating the Centenary of the First World War, on tour in the United Kingdom and internationally from August 2014 and Armistice Day, November 2018. 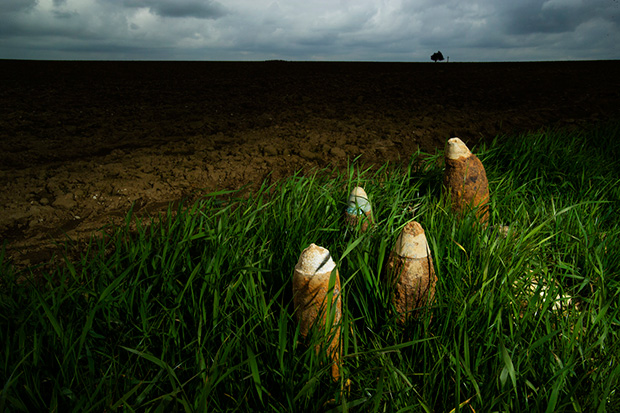 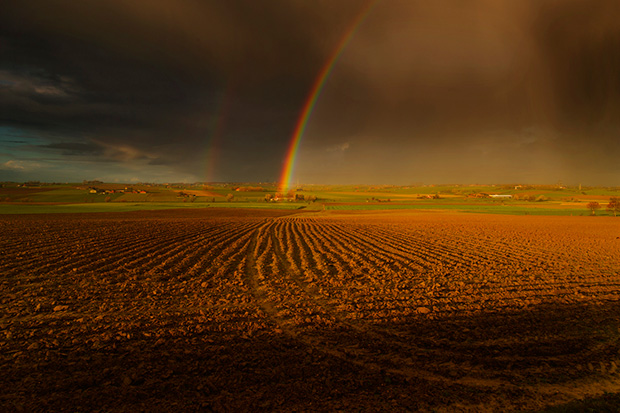 Messines: At 0310 on June 7th 1917 the British exploded 19 mines packed with a total of 450 tons of HE under the German lines along the Messines-Wijtschate Ridge. It was the largest man-made explosion prior to the nuclear era and it is estimated killed 10,000 men in a matter of seconds.
“Out of the dark ridges of Messines and Wytschaete there gushed out and up enormous volumes of scarlet smoke all lighted by the flame spilling over into mountains for fierce colour so that all the countryside was illumintae d by red light” Philip Gibbs, Daily Telegraph. 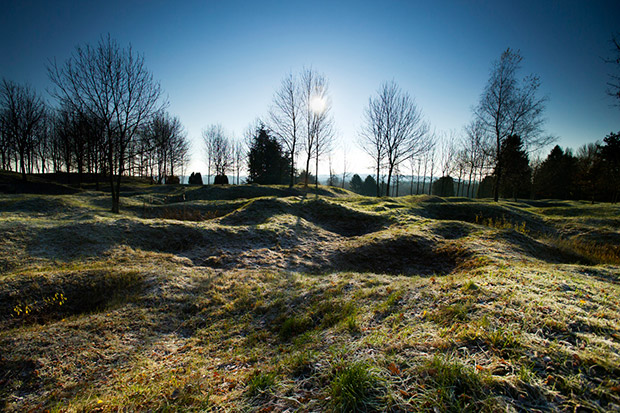 Verdun: Shell holes at Thiaumont.
“The infantryman has no function except to get himself crushed, he dies without glory…at the bottom of a hole, far away from any witness” Lt. Raymond Jubert 151st RI “Verdun 1916” 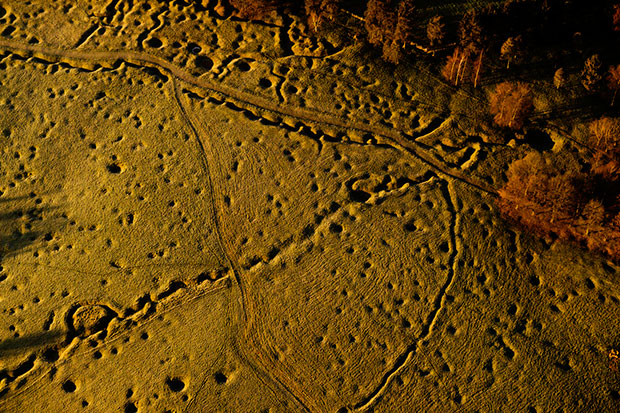 Somme: Aerial view of trenches and shell holes at Beaumont Hamel. The long shadows cast by the early morning sun show why aerial photography was essential to interpreting enemy positions. 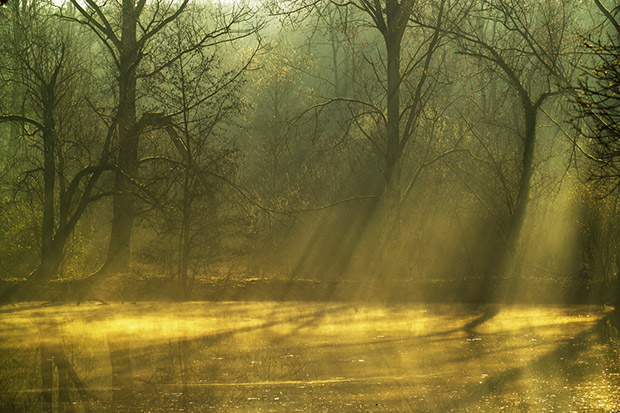 Somme – Marshes of the R. Ancre: J R R Tolkien served here and his experiences inspired the Marshes of the Dead in ‘Lord of the Rings.’
“… the only green was the scum of livid weed on the dark greasy surfaces of the sullen waters. Dead grasses and rotting reeds loomed up in the mists….’There are dead things, dead faces in the water,’ he said with horror. ‘Dead Faces!’” 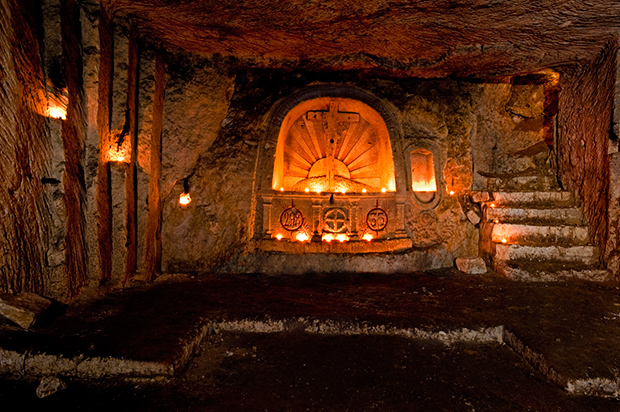 Confrecourt: The Chapelle of Pere Doncoeur was carved by French soldiers in a subterranean limestone quarry which afforded them shelter after duty in the front line. 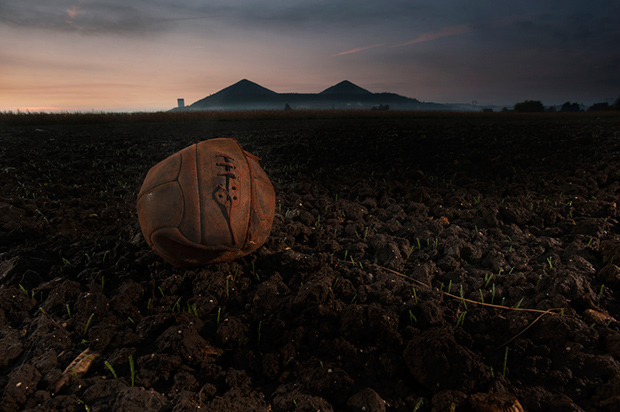 London Irish Rifles “Loos” Football. On Sept 25th 1915 the London Irish Rifles were ordered to attack German position in the mining town of Loos. They left their trenches and proceeded to kick this football across NoMansLand and into the German trenches. Here is is photographed on it’s “home ground” with the coal spoil heaps in the background, just as they were on the day of the battle.