A View From the Pit: Photos of Front Row Fans at Austin’s Many Music Festivals 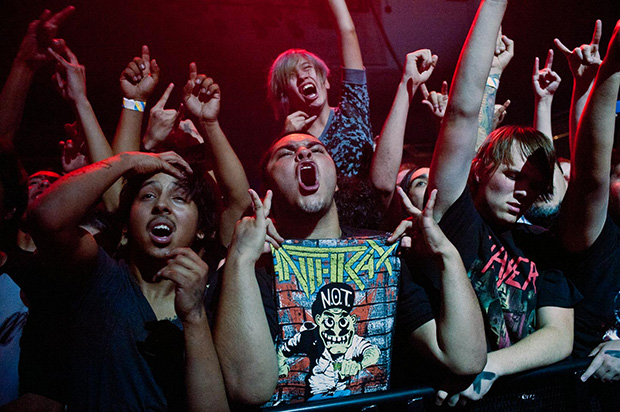 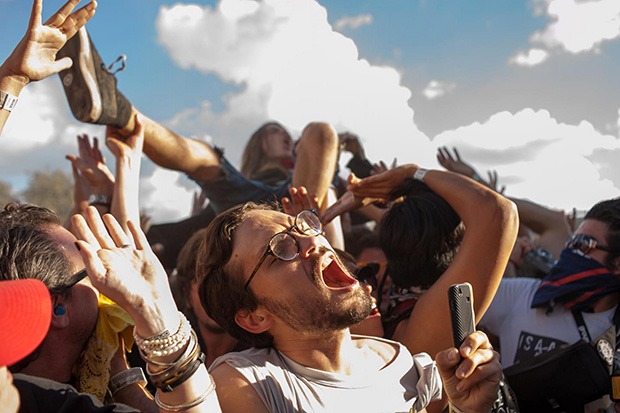 This week, tens of thousands of bands, music fans, and industry executives will teem through Austin for SXSW, the massive festival that started in 1987 with just 700 registrants.

Austin-based Sandy Carson has been photographing bands professionally for eight years, and being that he is based in “the Live Music Capital of the World,” he’s had his fair share of slogging through the pit, camera in hand, to capture many famous and lesser-known bands that have played at SXSW, Fun Fun Fun Fest, Austin City Limits, and the hundreds of shows happening year-round.

Carson’s new series, We Were There, features photographs not of the bands but of the crowds—those most dedicated fans who shove themselves to the front to be as close as possible to the show. He recently told us about what it’s like to work in the trenches at Austin’s many music festivals. 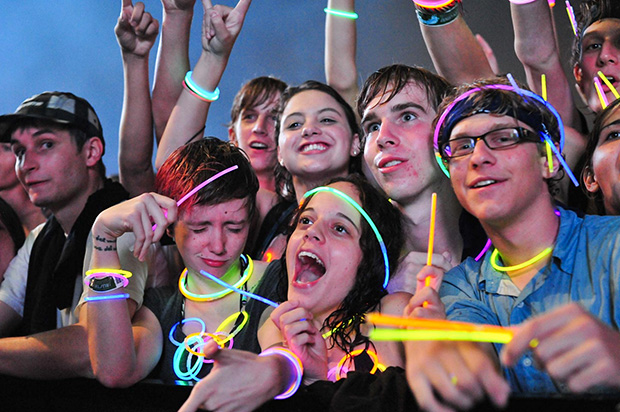 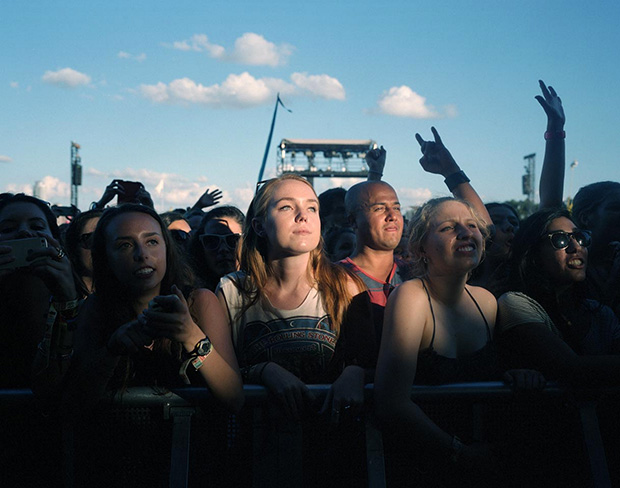 How long have you been photographing bands from the pit?
“For about seven or eight years now, but I’ve photographed punk gigs since I was a teenager. I just never knew there was a designated photo pit until I had real ‘concert’ photo assignments.”

When did you turn your attention on crowds?
“Almost immediately, since concert and festival bands play on massive stages that you can barely see over, and everyone is getting almost the same shots with telephoto lenses. It’s also much less claustrophobic stepping away from 50 other photographers standing shoulder to shoulder. The crowds are more animated and more pumped than the bands half the time, and I feel like the crowd photos make a more exciting document of the concert experience.” 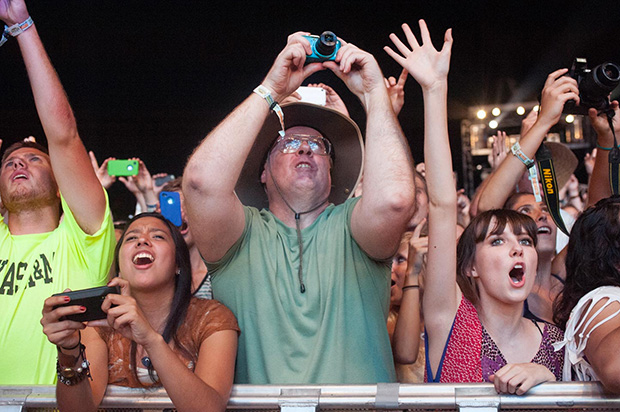 Have you ever received negative feedback of any sort from crowd members, either on the spot or afterwards?
“I have, on occasion, been spat on and flipped off, but most of the the fans don’t even notice I’m there when the band takes the stage.”

Do you have a favorite vantage point for shooting bands?
“Yes, ones that aren’t in the pit, to be honest. I like to be in the middle of it all, crammed down the front with a wide angle.” 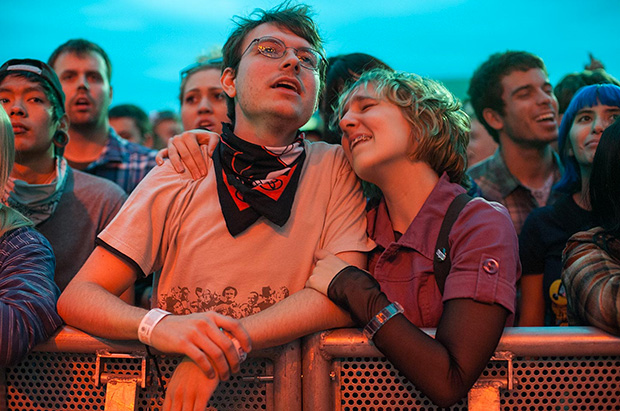 Any pit stories you’re at liberty to share?
“There is a pit etiquette and a bunch of unspoken rules, believe it or not. It’s pretty strict in there and there’s quite a bit of drama and heat that goes down at many of the festivals between photographers trying to get their ‘money shots.’ The last one I worked, another photographer whacked me on the head with his telephoto lens and told me to get out the way—another good reason to turn my back, face the crowd, and get my own money shots.” 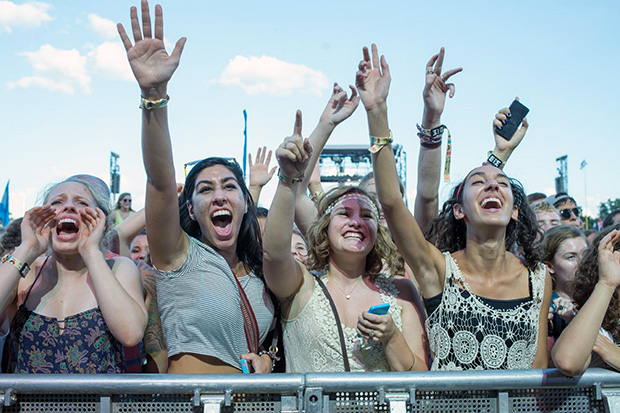 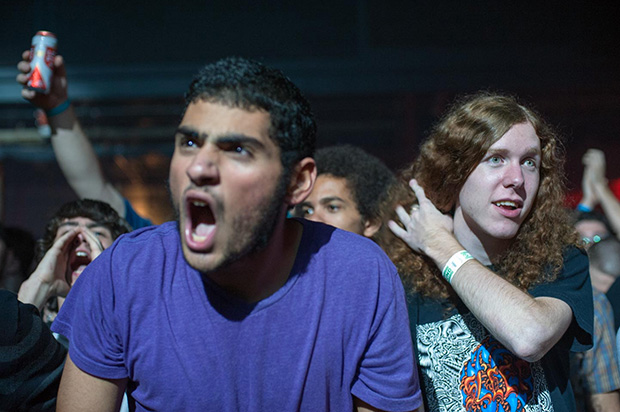 What’s the craziest thing you’ve witnessed in the audience?
“Probably when Slayer played Fun Fun Fun Fest. The audience was so amped up and pushing forward that it took dozens of security guards to hold the barrier up. People were being pulled from the front row into the pit, passing out from heat exhaustion. I thought it was going to crush all the photographers, who were also moshing while taking photos of the band and audience. Meanwhile amidst this, there was a dude crowd surfing in a wheelchair waving a cowboy hat. It was a pretty good sight.” 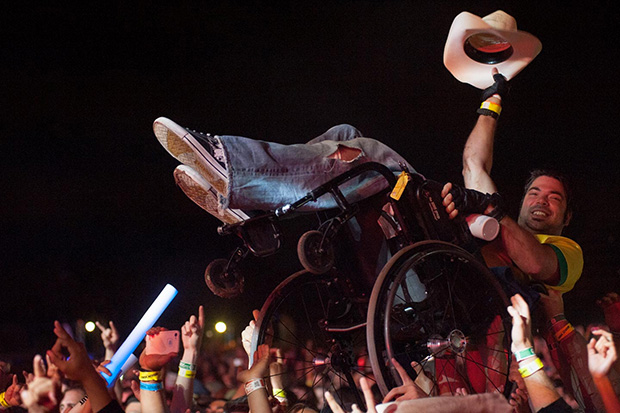