Portraits of Couples Who Met Online 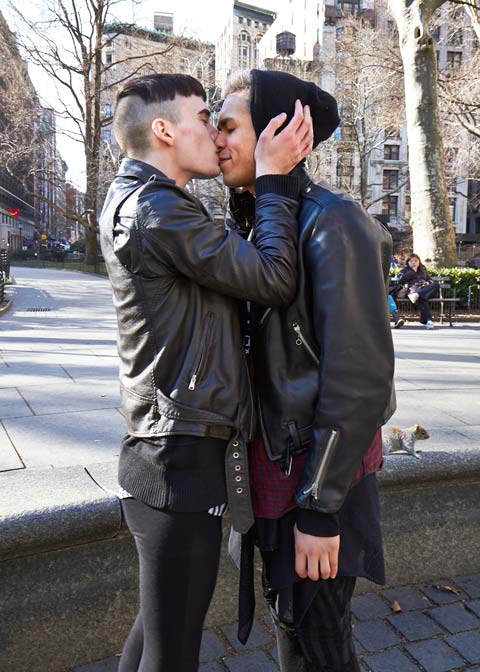 Taylor and Jonathan, met on Grindr
Love sprouts from the darkest of places sometimes. 22-year-old Taylor and 21-year-old Jonathan’s relationship spawned from Grindr, a site known for gay hook-ups. “It’s so bad. I know,” admits Taylor. “I had actually never used [the site] before. I had literally got it for the sole purpose of showing my hetero friends how disgusting the gay world can be. So I guess I kind of proved myself wrong.” Taylor’s profile caught Jonathan’s eye. “He stood out because he wasn’t some chunky looking Chelsea guy. I just kind of knew that we would hit it off,” said Jonathan. It took Taylor a while to warm up to the idea. “I didn’t really trust anyone on that site because of its reputation.” They have now been dating for two months and live together in Bushwick.

These days we live in a fast-paced, plugged in society where our computers and cell phones seem to get more face-time than our fellow man. And with the digital age, digital romance has become commonplace—”connecting online is truly the new normal,” says NYC-based photographer Jena Cumbo. In her ongoing project We Met On The Internet, Cumbo captures portraits of couples whose flame was first lit in the world of online dating. She has teamed up with writer Gina Tron who conducts interviews and writes short essays for each couple that Cumbo photographs. The duo is up to over 30 couples and they hope to publish a book soon that pairs photo with love story. 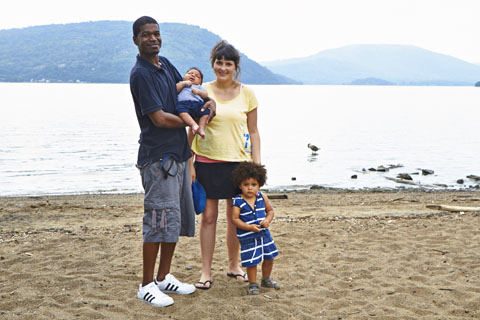 Cora and Will, met on Craigslist ‘Free Stuff’
Cora and Will met because of a Craigslist ‘Free Stuff’ listing. Will had free movie tickets and Cora was the taker. This was back before Craigslist anonymized responses. In the signature of Will’s email, Cora noticed his website. She clicked on it and discovered he was a talented graphic designer. She was intrigued by his work and they kept in touch, and their friendship turned romantic. They are now married and had a daughter in 2011 and a son earlier this year. 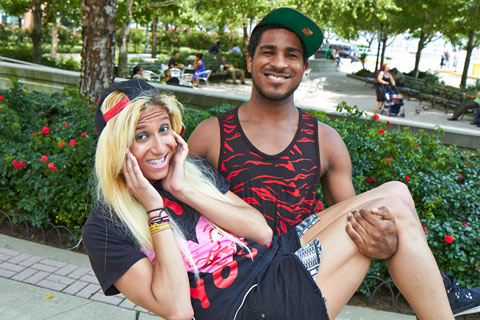 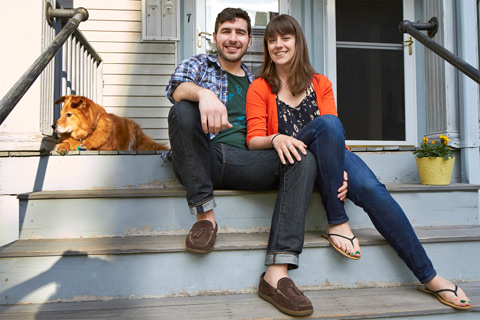 Linny and Pat, met on Craigslist ‘Missed Connections’
31-year-old Linny and 29-year-old Pat have been a couple since 2008 and married since 2012. Linny was sitting at a bar by herself while her friend paid the bill. “[Pat] looked over at me and came and sat down. Usually I was not very receptive to that sort of thing. We had a conversation and when my friend came back I got up, touched his arm, and told him it was good to talk to him.” As soon as Linny left the establishment, she was internally kicking herself for not getting Pat’s number. The next day she created a post on ‘Missed Connections.’ When she got home that evening, she had two responses to the ad. “One said, ‘Whatchu into?’ and the other was from Pat.” Romantic love is not the only love the two found online. They also found their dog Freddie through Petfinder. “The Internet made my family,” Linny stated. 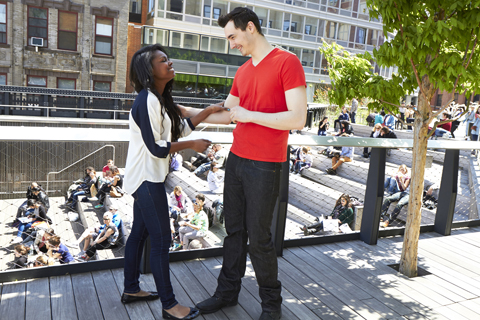 Ember and Patrick, met on Meetme.com
19-year-old Ember began using a website called “My Yearbook” when she was in high school. The site transitioned to Meetme.com, a site primarily used for friendship. 23-year-old Patrick found Ember on the site in August of 2012 and their original intention was to be platonic. Ember had a get-together at her house a month later and invited Patrick to come. Immediately after meeting in real life, platonic turned to romantic. “There was an immediate connection when we first met.” 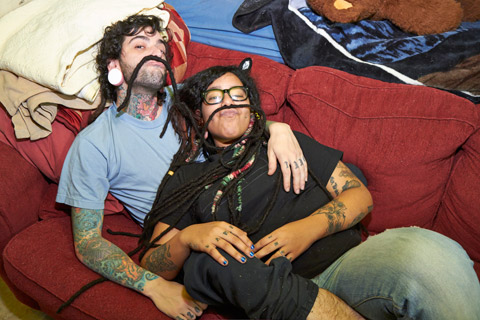 Mariela and Tiago, met on Tattoodatingsite.com
Mariela is a 21-year-old self-taught photographer. Tiago is a 30-year-old who has worked as a finishing carpenter since he was a kid. They found one another in cyberspace thanks to their shared love of tattoos. Mariela thought that Tiago was cute. They began talking on Skype and then met in person. On their second date they shared some ink time together. Tiago got a previous piece polished off, while Mariela received an eye on her forearm. After just two weeks of dating, they moved in together. After four months, they got engaged. Now the two share matching tattoos. 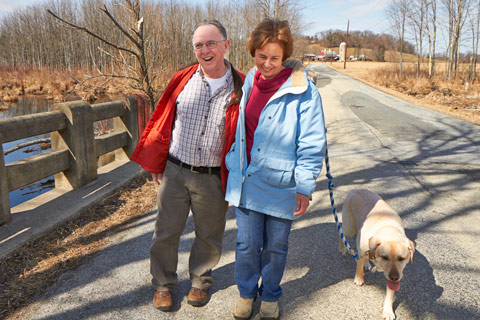 Ann and Bill, met on Match.com
Bill, now 61, was working as an energy auditor in Vermont and became a widower in 2003 when his wife died of cancer. Around the same time, the company he was at downsized. He felt that in order to meet people at this age and in this new territory, his only option was the Internet. He joined Match.com in 2007. The same year, Ann, a librarian from Wantage, NJ got separated from her husband. She had been seeing commercials for Match.com. “I just figured I’d look and see if there was anybody interesting in my age group. There were a lot of pictures of guys posing with their motorcycles or posing with the fish they just caught.” But Bill caught her eye with his non-macho profile pic and photographs of his dogs. 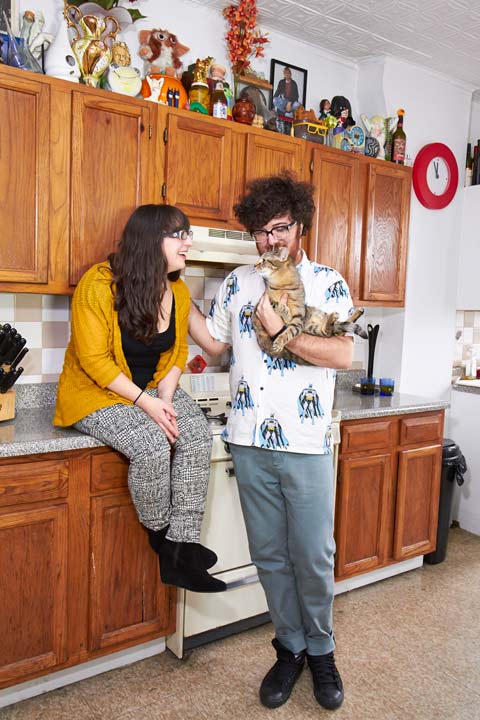 Roberto and Valerie, met on Makeoutclub.com
In the era of Friendster and the birth of Myspace, Roberto and Valerie connected on a website called Makeout Club. Around Thanksgiving 2002, Roberto shot Valerie a random message. “It was like a chance encounter. There was no organization to it,” he admits. The two soon became friends, despite living states away. On March 20, 2003 Roberto drove to Philly and they shared their first date. “We saw Eternal Sunshine Of The Spotless Mind and had dinner. It was the perfect date,” gushed Valerie. “It was the first of our everythings: first date, first dinner, and first kiss in streets of Philadelphia,” Roberto added. They have been living together in Brooklyn for two years and are planning a pregnancy in the near future. 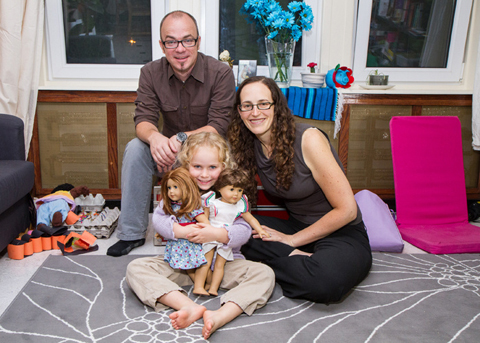 Sarah and Steve, met in a Yahoo chat room
Sarah was living in Chicago and Steve in the UK. It was late at night in Chicago when Steve’s screen name caught Sarah’s attention; it included ‘UK’ and Sarah chatted ‘how late it was for him to still be awake.’ The two were chatting about cycling. Their mutual interest in the sport spawned their romance and Steve ended up moving to Chicago. The married couple recently relocated from Chicago to Queens when Sarah took a job in NYC. They have a 4-year-old daughter whom they homeschool together.