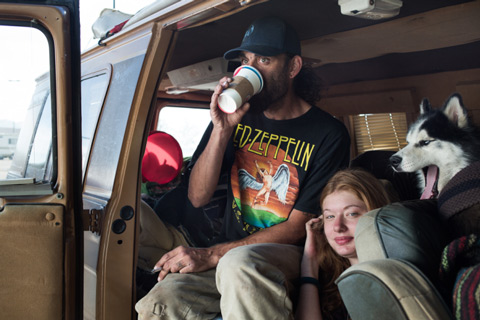 Dave Gooding, Liz Deno, and Shaggy (dog), from Georgia, are on their way to Montana. “You meet a lot of good people who like to help out, so when people do that,” Liz says, “it’s like a karma broker. You give people an opportunity to give good karma back.”

I have this image burned in my mind from middle school of an old beat up station wagon filled with someone’s belongings, parked way in the back of a Walmart parking lot. When I saw this scene it was winter in my hometown in Eastern Washington state and the car had plastic sheeting in the place of a missing window. I was a naive, relatively privileged kid, but I knew that someone would be shivering in that car that night, and it affected me. It was this memory that eventually led me to take photos of the people I came across in the parking lot.—Nolan Conway

Brooklyn photographer Nolan Conway spent three weeks exploring the culture of the United States’ largest retail chain and the people who loiter there. Waking Up at Walmart is a series of portraits featuring curious characters and vagabond tales, all clustered around the edge of various Walmart parking lots in Flagstaff, Arizona. Here is a world of loss, leisure and the occasional adventure. In a place where a failed economy and a corporate giant juxtapose, the common man still gathers to seek comfort in the fluorescent lights radiating 24/7. 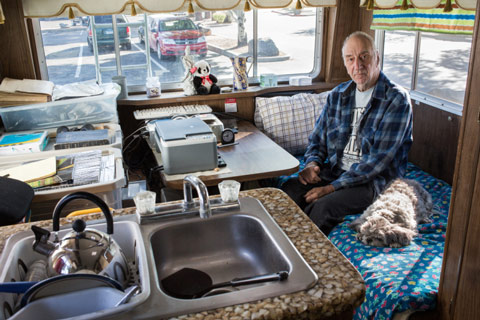 J.D. Gilkey sold the family home and has been driving around the country researching his family’s genealogy. He says his travels have brought him to 500 Walmarts in the U.S. and Canada. “Christmas of 2011, there were about nine of us in the Walmart parking lot in Albuquerque,” he says. “Christmas Eve I put a note on everybody’s door to come over in the morning, and I fixed Christmas breakfast for everybody.” 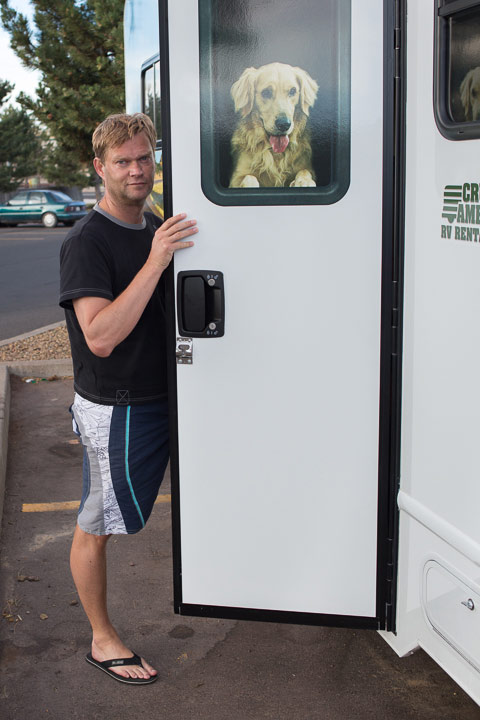 Heiko Bergman, from Germany, rented an R.V. with his family to tour the southwest. A nearby R.V. park was full the previous evening. The people who ran the R.V. park recommended that they try the Walmart parking lot. 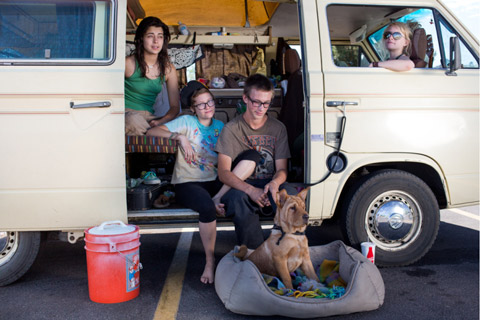 From left: Megan Hoffman; Sophia Stauffer and her boyfriend, Alex Daby; Deanna Bunch and Kerouac (dog). They were traveling from Prescott, AZ, to Montana. Each of them plays at least one instrument, and they fund their travels by “jamming” on street corners. Sophia describes the nomadic life as an opportunity to “do what I want to do and not have to worry about all the bills and worry about what’s happening next.” 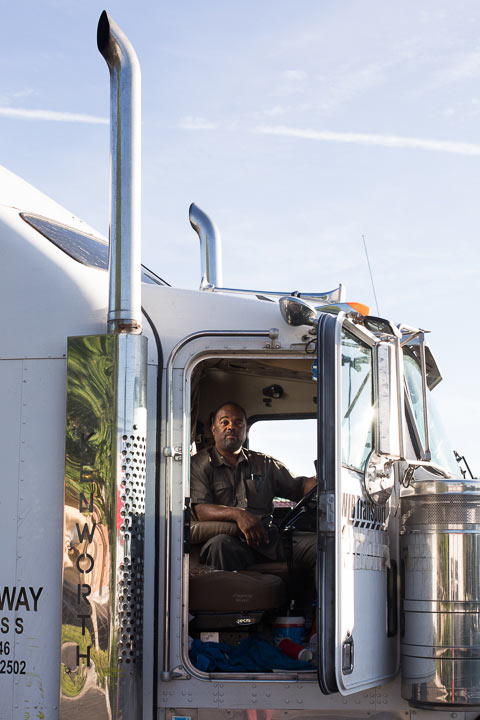 William White was shipping store fixtures from a closed pet store in Flagstaff to Las Vegas. He gets good rest sleeping in Walmart lots. “When you have 40 or 50 trucks in a truck stop, it’s like trying to sleep in a beehive.” 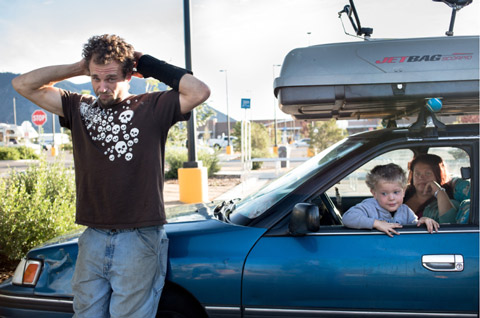 “We sold everything we had and decided to find, as we put it, our American dream,” says Josiane Simpson. She, Jared Holfeltz, and their son Gabriel are currently living out of their car. Jared hopes to start a contracting business helping rebuild after natural disasters, but he recently hurt his wrist working a construction gig. So their dreams are on hold for a few weeks until his wrist improves. 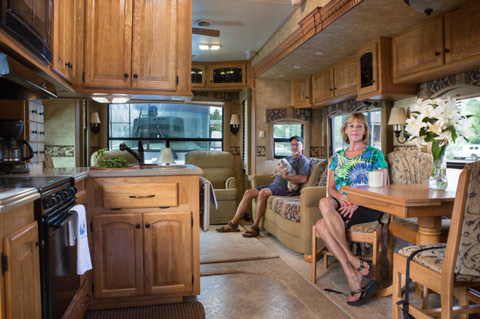 Sheldon and Jacquie Britton from Phoenix, AZ enjoy their morning coffee by the gas fire in their “fifth wheel” camper trailer. They are on their way to Milwaukee for the 110th Anniversary of Harley-Davidson. “I have everything in there that I require without having to pack a suitcase and take it into a hotel,” Jacquie says. “I have full-size walk-in closet…I even have my china if we’re entertaining somebody.” 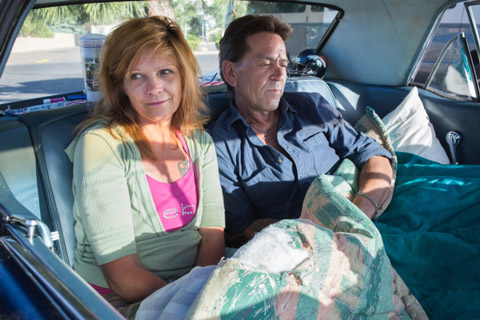 Jack Spano and and Dawn Lovingood are Army veterans from Colorado. They are in Flagstaff visiting the veteran’s hospital. 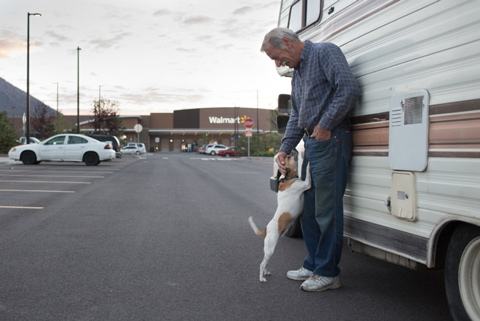 “These are the best years of my life,” says retiree, Leroy Morris. He lives off social security in his small R.V. with his dog, Maggie. He spends summers in the Flagstaff Walmarts and winters in southern Arizona. 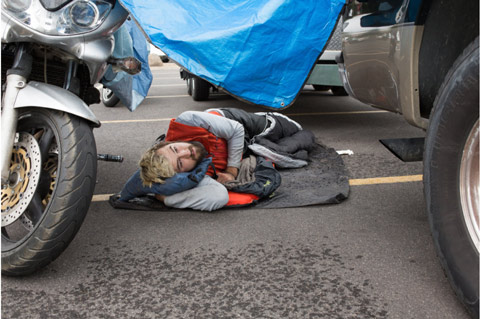 Caleb Goodaker-Craig from Austin, TX, a painter on an 11,000-mile solo bike trip. “I was riding through to check out Walmart, and I met an older guy who invited me for a glass of wine. He let me sleep between the truck and his R.V.” 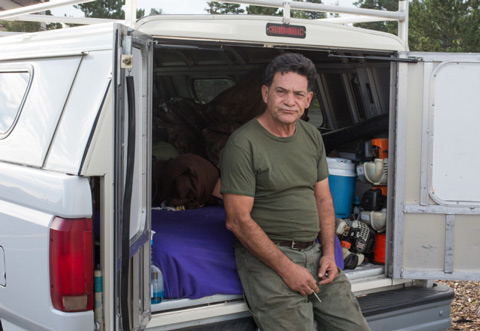 “My wife threw me out, because I’m a drunk,” says Sal. “I drink too much vodka.” He currently works odd jobs and lives out of his pickup. 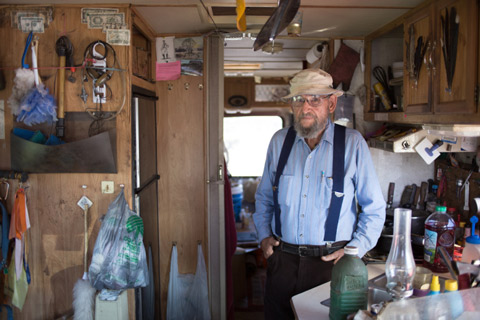 Rick Keller, 75, says he doesn’t live in his R.V. for economic reasons, “I belong in the woods.” He lives in the woods, but comes to Flagstaff on weekends to restock. “I just pray that the Lord keeps me alive one more year, because these are such exciting times,” he says, referring to the Arab Spring. 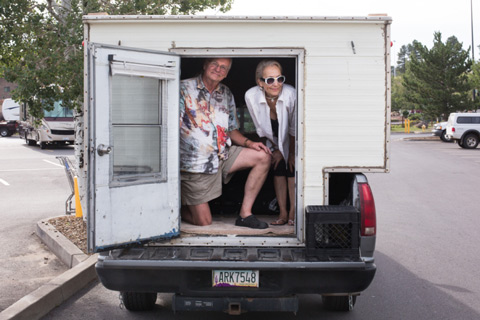 Stephen Pike and girlfriend Christina Plascencia are traveling north with no destination in mind. They started in Bisbee, AZ. They were kept awake by a street cleaner driving in circles through the parking lot the night before. Stephen says, “I think he’s a subliminal irritant—keeping us up, instead of asking us to leave.”