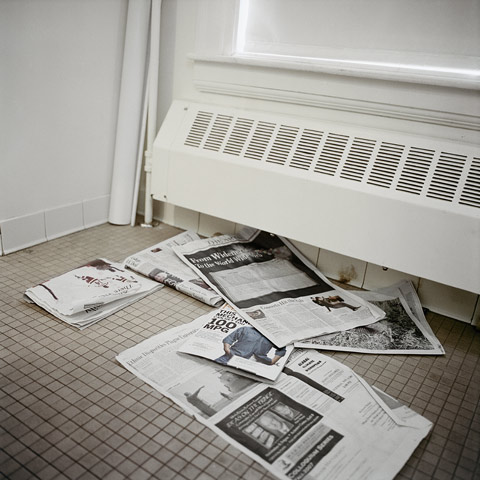 Upstate New York-based photographer Kristy Carpenter shows us a side to Harvard life we weren’t expecting in her series Some Harvard Bathrooms. We recently sat down with her to hear about what led her to photograph the inside worlds of students’ bathrooms, what she found there and how we perceive things.

How did you start working on this project? Whose bathrooms are these?
“In many ways I sort of stumbled into it. When I started this series, I was taking a college photo class and struggling to find a focus. In the beginning I spent a lot of time—and too many rolls of film—trying to make the images I thought I should be making. Ultimately they weren’t working. That’s when my professor told me to stop worrying about making art and instead start making photographs. It seems obvious, but it was something I needed to hear then and is still something that lingers in my mind now.

“I started taking my camera with me to places I originally wrote off as not worthy of being photographed, including work. While classmates worked in the library or the café on campus, I spent hours each week scrubbing their showers and cleaning their bathrooms. It was a bit strange at first, but I came to know these spaces quite well, probably better than the students living there. I knew where the loose tiles were, which sinks leaked, and where the missing glasses from the dining hall ended up. My camera became another part of my kit, slung over my shoulder as I went room to room with my broom, mop, and bucket, exploring the bathrooms of Cabot House.” 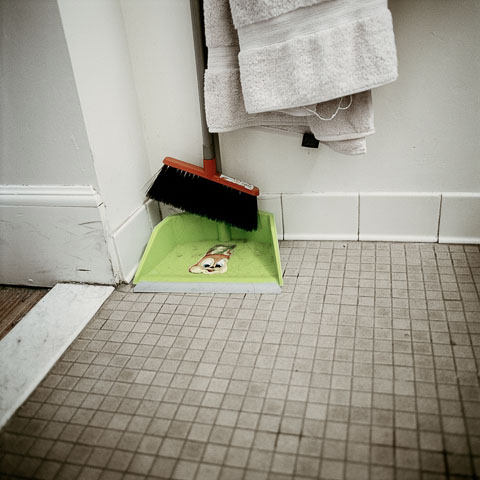 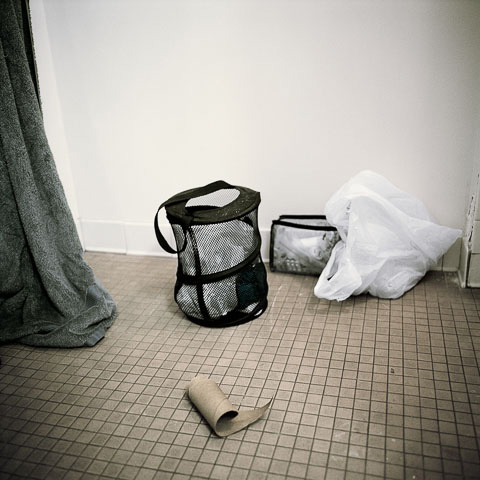 Do you consider this project to be a documentation or a critique? And if it is a critique, is this meant to be a critique of the students, the university or other aspects of the education system?
“I think it definitely falls somewhere in between those two. When I first started shooting I thought I was looking at the idea of these generic institutional spaces and our relationship to them, focusing on the traces of the individual found in the environment, but that shifted. The images became less about the person that wasn’t there and more about the bathroom itself as the character in the story. I really do consider them portraits of bathrooms, though I’ll admit many are far from flattering.

“The more I looked at these interiors, under those dim fluorescent lights; I realized why they fascinated me. Part of it was that they were typically overlooked; I felt like I was seeing something others weren’t. Obviously the students were seeing them everyday as they brushed their teeth in front of the mirror, but they weren’t looking. In some ways I wanted to make them look and see what I saw when I stepped into these spaces. I guess that’s the documentary side of things.

“As for the critique, well, I realized it was less about the institution itself and more about our perceptions of it. The images I made, and really the spaces I cleaned, were at such odds with the mental image one has of Harvard that I found it highly amusing and a bit bizarre. To an outsider Harvard can seem like a mythical entity of bricks and ivy, complete with autumn afternoons bathed in glorious warm light and attractive people playing Frisbee at all times—at least according to the brochures. For me it was about showing the cracks, often literally—a dose of reality and the imperfections that exist if we look close enough at anything.” 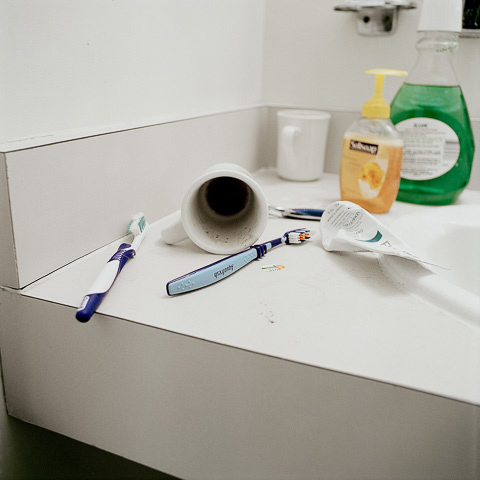 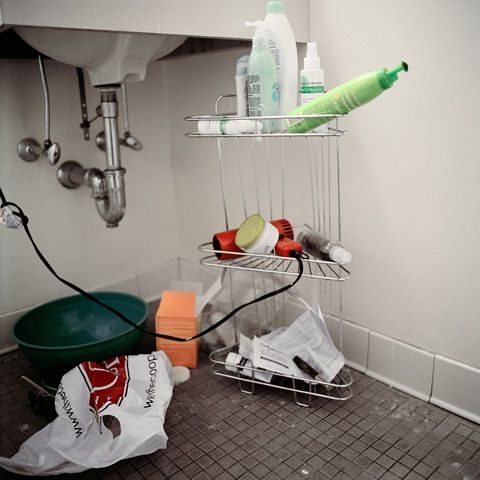 Can you talk about the power dynamics between the people you’re cleaning for and the fact that you’re revealing intimate parts of their lives (though anonymously)?
“Navigating that relationship was one of the most difficult parts about making the work. Honestly it was also the most awkward part of the job as well. Depending on whose bathroom you were cleaning, you could feel like another piece of furniture in room—something the student moved around, but paid little attention to. While in others, it was like sitting down next to someone on a plane and hearing their life story, down to what type of toothpaste they used. It was strange encountering these students outside of their rooms—sitting behind someone in a lecture and awkwardly realizing his bathroom is the one plastered with centerfolds or recognizing one’s name from the legion of passive aggressive Post-Its covering a mirror.

“I guess that awkward moment of recognition was what I feared with the images themselves, or really the reaction they could cause. I felt like a voyeur and I guess I was. I made the images much in the same way, especially at first, rushing to get a couple shots before someone walked in on me with my camera. The more I worked on the series my hesitance and guilt waned. In part, fostered by a professor preaching the “It’s better to ask for forgiveness than permission” mantra and my own direct disobedience of that as I started asking the approval of those I encountered while cleaning.

“I don’t recall anyone actually turning me down, though the looks I received ran the gamut of dismissive to intrigue. Once they learned I was an art major that seemed to confirm whatever assumption or judgment they had already passed. As for those who never knew, well I guess I eventually decided it was fair game as long as they were anonymous. Even I didn’t know most of the people, by name or face, but I knew where there was a taxidermied alligator, an illegal cat, and a room filled with enough back issues of the Crimson to resemble a giant hamster cage.” 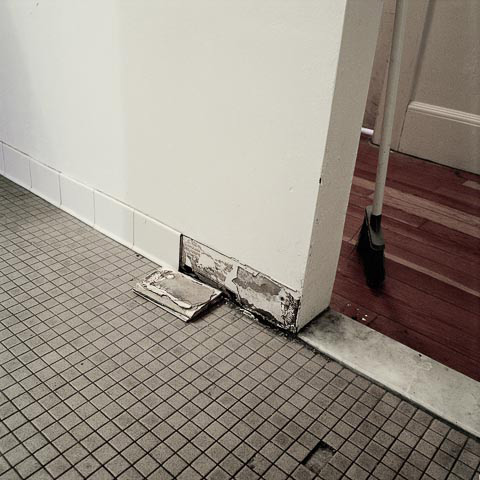 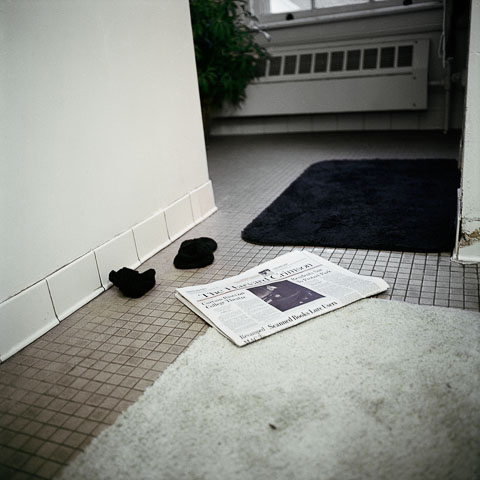 The majority of these photos are not identifiable as Harvard or connected to any specific person. Was this anonymity important to you in the project?
“I think anonymity was important namely because it further emphasized the point I was trying to make. This place, this beacon of academic excellence, isn’t really all that different in a lot of ways from other institutions. You wouldn’t see these interiors and immediately think, “This must be Harvard.” And approaching the photographs—knowing where and what they are—the images are not at all what one expects to see. It was about looking beyond the name and focusing on the details.” 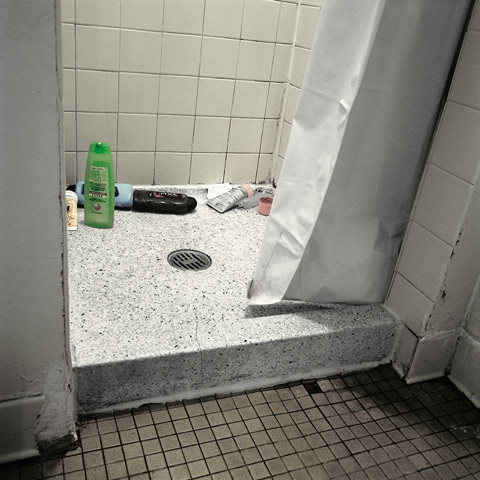