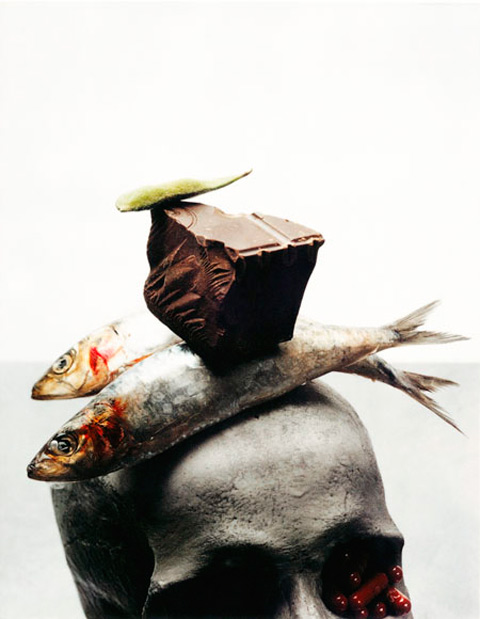 It was when all the talk about chocolate as a nutrient (and edamame, fish, and almonds) was reaching a crescendo that we were brought together to make this picture. The crux of the article was whether these foods were enough to meet our nutritional needs. There was talk from the sittings editor about working vitamin capsules into the composition. I brought all the foods to set and some empty vitamin capsules. Hans brought a skull. A human one. The image that ran was minus the human head. That was just too much for Anna.—Victoria Granof

Among the many tantalizing and beautiful food photos that grace the pages of magazines, there are naturally those that never quite make it to print. Killed: Beautiful Food That Never Made the Cut is the newest collaborative exhibition conceived by food stylist Victoria Granof and photographer Craig Cutler that showcases a selection of Granof’s unpublished collaborations with renowned photographers. Here Granof shares the backstory behind a few works from the exhibition, which opens November 21st in New York City, and will include work from Hans Gissinger, Kenji Toma, Mitchell Feinberg, Marcus Nilsson, Ilan Rubin, Anita Calero, Marcus Gaab, Plamen Petkov, and Christian Witkin. Mementos from Granof’s decade-long collaboration with the great Irving Penn will also be on display. 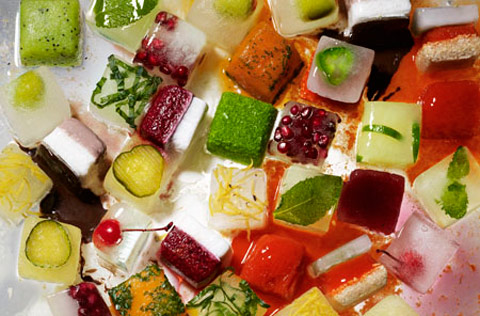 “Ice Capades” by Kenji Toma for Every Day With Rachael Ray

Thank you, food team at Every Day With Rachael Ray, for coming up with the weirdly wonderful idea of freezing every known thing in cubes—Tabasco, horseradish and jalapeno, lemonade and basil shreds. Milk dyed red, white, and blue! Thank you, photo team at Every Day With Rachael Ray, for knowing enough to hire Kenji Toma to shoot this. And thank you, Toma-san, for bringing me into this with you. They could have been…just ice cubes. The magazine ran several of the meticulously lit, Stonehenge-like compositions, and they were stunning. But it wasn’t until we cleaned out all the rejects from the freezer that we found this image, melting away on the drainboard.—Victoria Granof 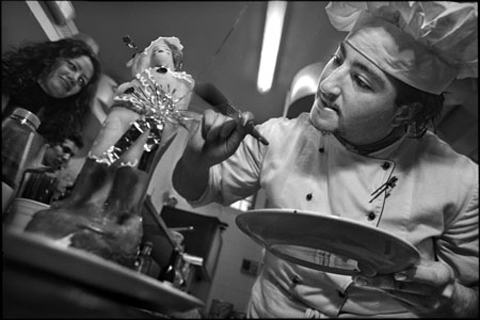 In 1999, I took my paltry first-time-author’s advance, along with the photo team of Thomas Michael Alleman and Linda V. Lewis, and my friend Monica and her impeccable palate to Sicily. There, we spent weeks photographing and documenting the pasticcerie of the island, for my book, Sweet Sicily, with the unfortunate publication date of September 10, 2001. One day in Palermo, after having crashed our rental car in a ghetto, we took refuge in a café in an alley somewhere. The chef rolled up in his souped-up Ducati with his heroin-addicted wife and commenced to flambé a cassata, then sprinkle azure crystal dust on it “to simulate the ocean.” When we came back the next day with cameras, he had cleaned up his act and donned boring chef’s whites. From somewhere he produced boringly perfect cassatas on paper doilies that looked like everyone else’s. So boring, Tom didn’t even bother to load film after this one shot. But the wife still lurked in her original state.—Victoria Granof