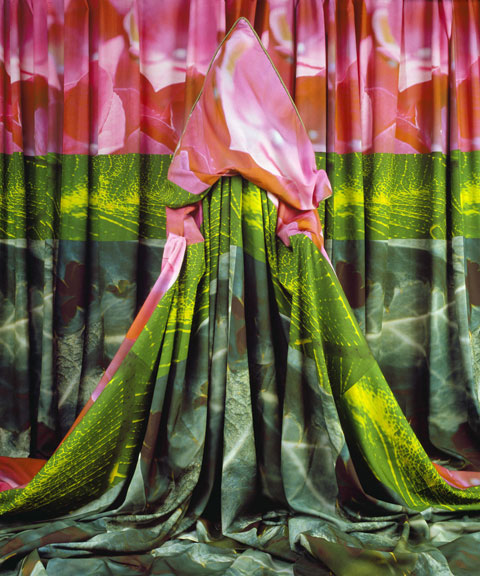 Chicago-based photographer Patty Carroll’s series Anonymous Women: Draped presents a sumptuous landscape of heavy, textured fabrics that keep our eyes moving hungrily around each frame. Underneath the weight of these fabrics, as we know, are women holding still so that we might question their positioning as decorated object; the voice of the photographer could not be more articulate. We sat down with Carroll to find out what these images mean personally as well as the greater societal implications of hidden women. 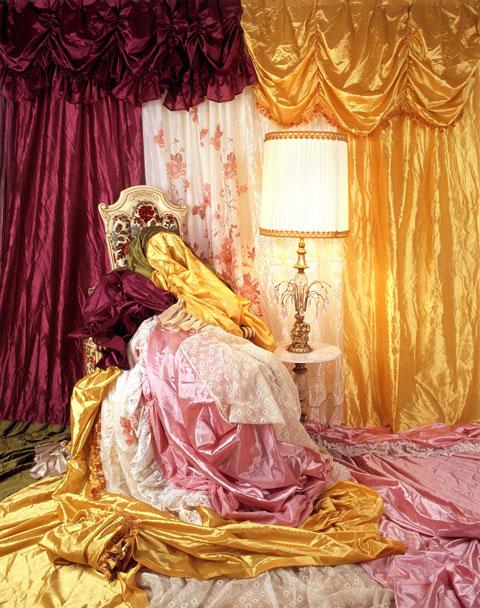 What is your relationship to domesticity? Did you pursue photojournalism initially as an effort to forge a different path?
“I started out photographing out in the world. It was a process somewhere between documentary—in that I was documenting places that exist and not manipulating them—and revisiting memories of childhood. I found places usually at night that triggered buried memories and emotional states of a kid waiting for adults. The scenes were artificial places of desperate entertainment such as bars, restaurants, casinos, bowling alleys, etc. I looked for the alluring glow of roadside lights, and highly saturated color.

“The experience was always from the outside looking in or at. Although the places are real, they always seemed like fictional sets for movies, or at least stories that I could make up. When I began the drapery series, it was a completely different time in my life of making and remaking a home. My husband and I moved to England for four years. It was quite a shock to my system, as we thought the move was permanent. My work and life had always been centered in American popular culture, so the move caused me to look both inside myself and more universally at women’s experiences.

“My identity to the world suddenly shifted from a comfortable state of American independent artist to Mrs. Jones. I realized that so many people are only known through their domestic relationships—particularly in more traditional societies—and the frustration that history has inflicted on women. Confronting the issue of what and where is home became an important theme.” 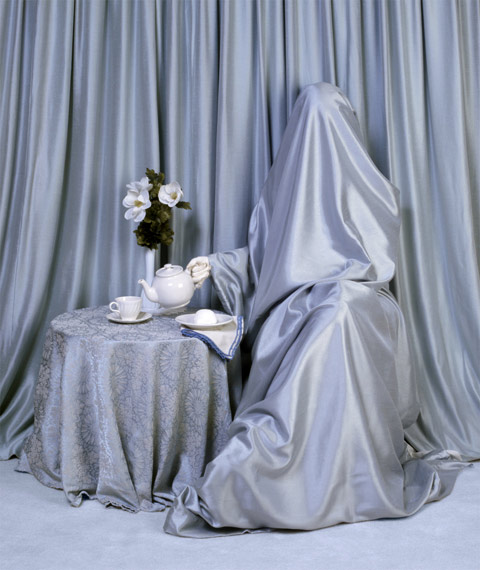 How has studio work changed your working methods emotionally and intellectually?
“I began working in the studio with a model and covered her face with domestic objects. When we returned to the USA, I had to once again begin the process of making a home for us. It became a bit of an obsession. At the same time, the war in Iraq was building, and my godchild niece went as an officer in the Marine Corps. It weighed heavily on my mind, not just for our troops, but the women who lived there, and that home would never be safe or comforting ever again. Hiding from conflict is a natural response for most women, and the drapery is a way of symbolizing the idea of feeling safe and enveloped in one’s surroundings. Like the Wizard of Oz, who controls from behind a curtain hiding his identity, the draped women are also humorously anonymous but powerful.

“What I have learned as a photographer is that we exist both in the world and in our heads. Photography shows us new ways of looking at the world, but it can also reveal our private worlds less literally. The studio allows us to construct our private world in a way that is not available elsewhere. I love both ways of working. When we just had film and the darkroom, the process was to shoot in good weather, and go in the darkroom for the winter and print up all the images you had shot earlier. It had a rhythm that included a separation from the world and work and a period of contemplation. Now with digital, it is all too immediate.

“The studio work is more contemplative and difficult, because you are making something to photograph, rather than finding and perhaps lighting it. Photography has the ability to take us places we would never go otherwise, which includes an internal ‘dialogue of ideas and worries. Like a long road trip, the studio helps that internal process.” 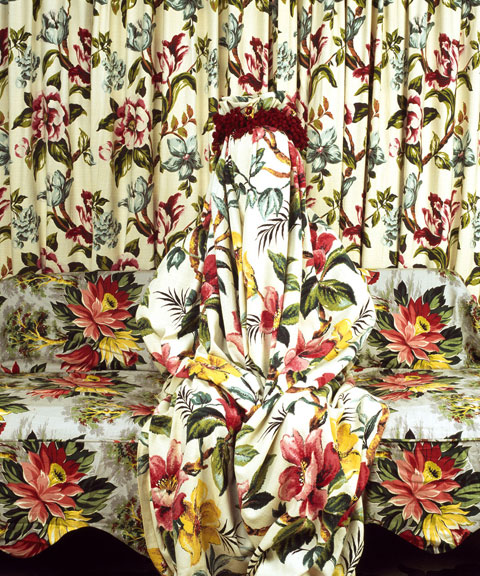 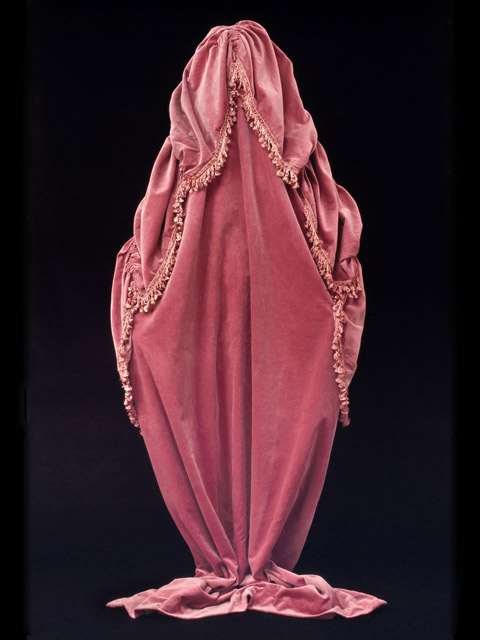 Are you working on other projects that explore womanhood and its various meanings in contemporary society?
“I have been making some photographs of women in cafes and other public places that are a combination of real and fictional worlds. They look like images from a former time, but are about timeless feelings of wishing, hoping and waiting for something to happen; perhaps the next phase of their lives, or contemplating a loss, or feeling alone and a bit desperate. Like most of my pictures, loneliness—or at least being alone—seems to be the main theme.” 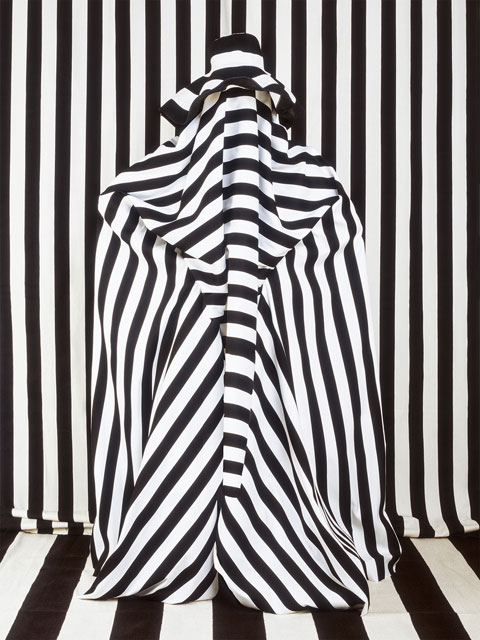 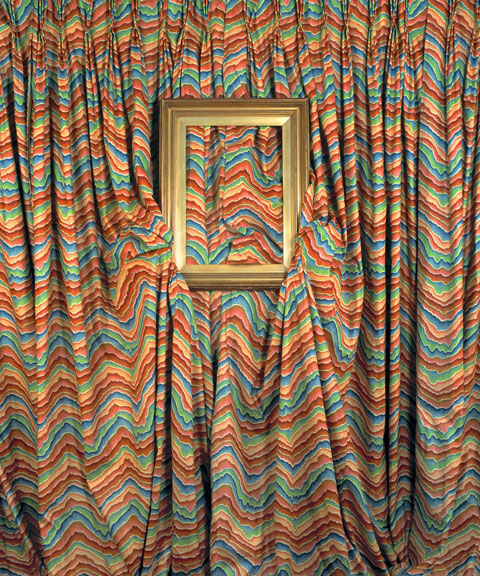