The Hope and Resilience of Animals, in Photos 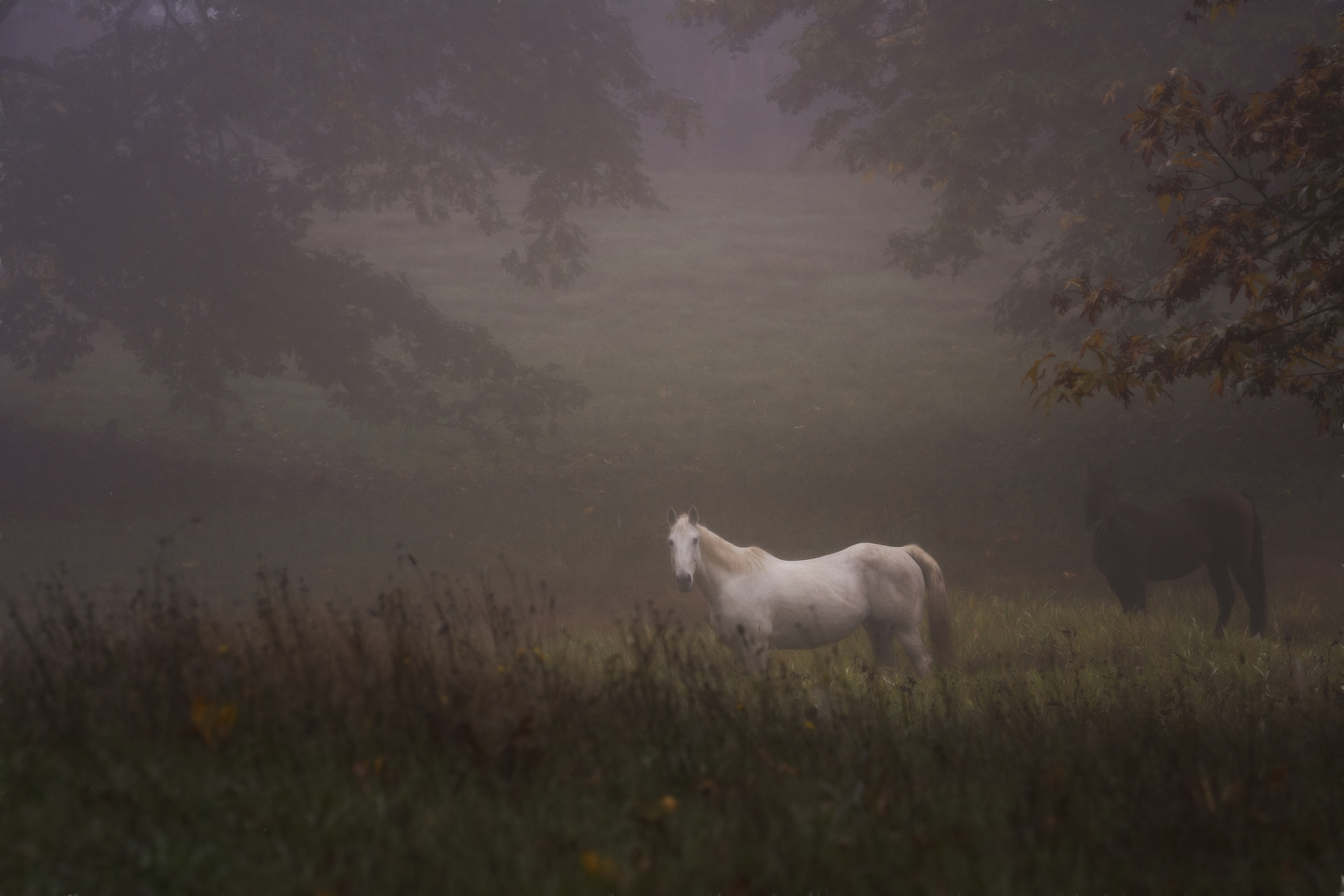 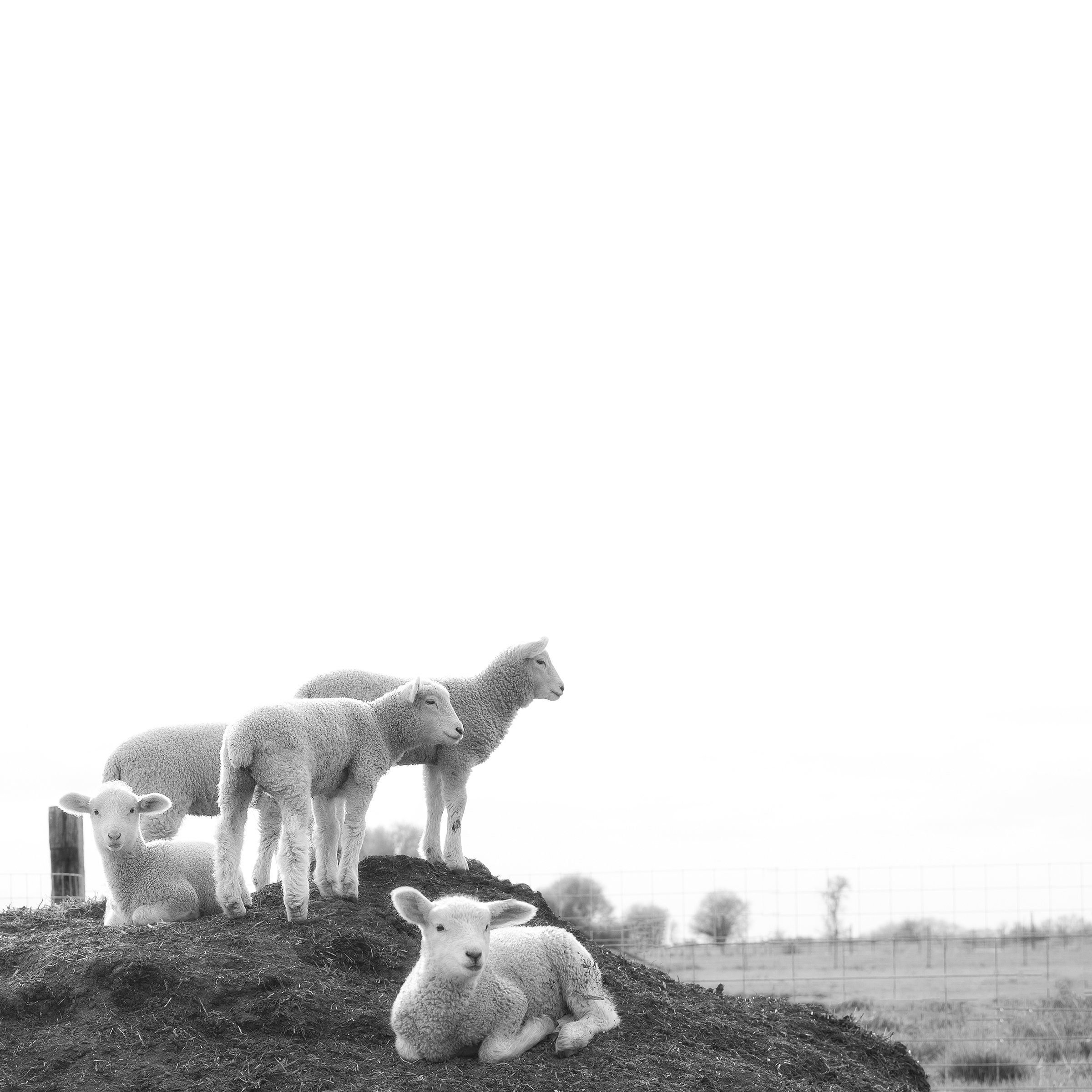 “I first saw Chloe as I was passing a beautiful rolling pasture on my drive home,” Deb Hodges remembers. “It was late afternoon. Her whiteness was shimmering against the dark green of the forest behind her as she grazed in a pasture green with the promise of warmer days ahead. I’d driven by that pasture for years and had never seen her. I knew I had to photograph her.”

After weeks of searching for the property owner and the lessee, Hodges finally got to meet Chloe–a senior horse in her 20s. Chloe had been with her family for eight years, and she had melanoma. “From a distance, she was perfection,” the artist says. “Up close she had a large mass growing at the edge of one of her eye sockets. And the base of her tail was deformed by a collection of lesions and growths that hadn’t yet interfered with her bodily functions but would before long.”

When working with Chloe, Hodges chose to photograph the side of her face without the melanoma. She’s worked with farmers and rescuers for years, and she’s heard her fair share of stories about abuse, neglect, and illness–but she’s more interested in moments that give her hope. “My goal has never been to photograph suffering,” she admits. “It has always been about capturing caring relationships and goodness.”

Hodges spent her childhood in Iowa–with farms on either side of her. “We were the go-to place when families in the area found baby animals,” she tells us. “I remember having baby squirrels, rabbits, owls, foxes, and skunks at various times growing up. Each creature would be brought into the kitchen, nestled in a cardboard box with lots of soft fluffy shredded newspaper, and hand-fed until they were old enough to fend for themselves.”

Though she’s now based in San Miguel de Allende, Hodges created many of her farm photographs in Gig Harbor, Washington. While there, she built enduring relationships with local farmers and organizations like the Stillpointe Llama Sanctuary in Silverdale–where mistreated and abandoned llamas are rescued and rehabilitated. Some of them are adopted once they heal, and others remain at the sanctuary for life.

Though her work has always been about tenderness and joy, the photographer is quick to point out that farming and rescue is difficult, sometimes painful, work. “Regaining an animals’ trust after it has been wasted by careless caregivers is an uphill battle that is sometimes won, and sometimes not,” she says. “Every one of the rescue groups I work with are run by amazing people with big hearts and lots of patience, who know they must let the animals be who they are, and who they have become due to their misfortune.”

From the moment she first met Chloe the horse, Hodges understood that she wouldn’t have much time with her. Chloe was sick, and the photographer was preparing for a move. But Chloe’s story–and Hodges photographs–are more about hope and resilience than it is about loss. “We had a particularly harsh winter this year–lots of snow and cold,” the photographer tells us. “Last March, I looked at that empty pasture covered in snow and wondered about Chloe. Was she gone for good? And then, I came up the hill and around the corner, and there she was–decorating the pasture with her brilliant whiteness.” 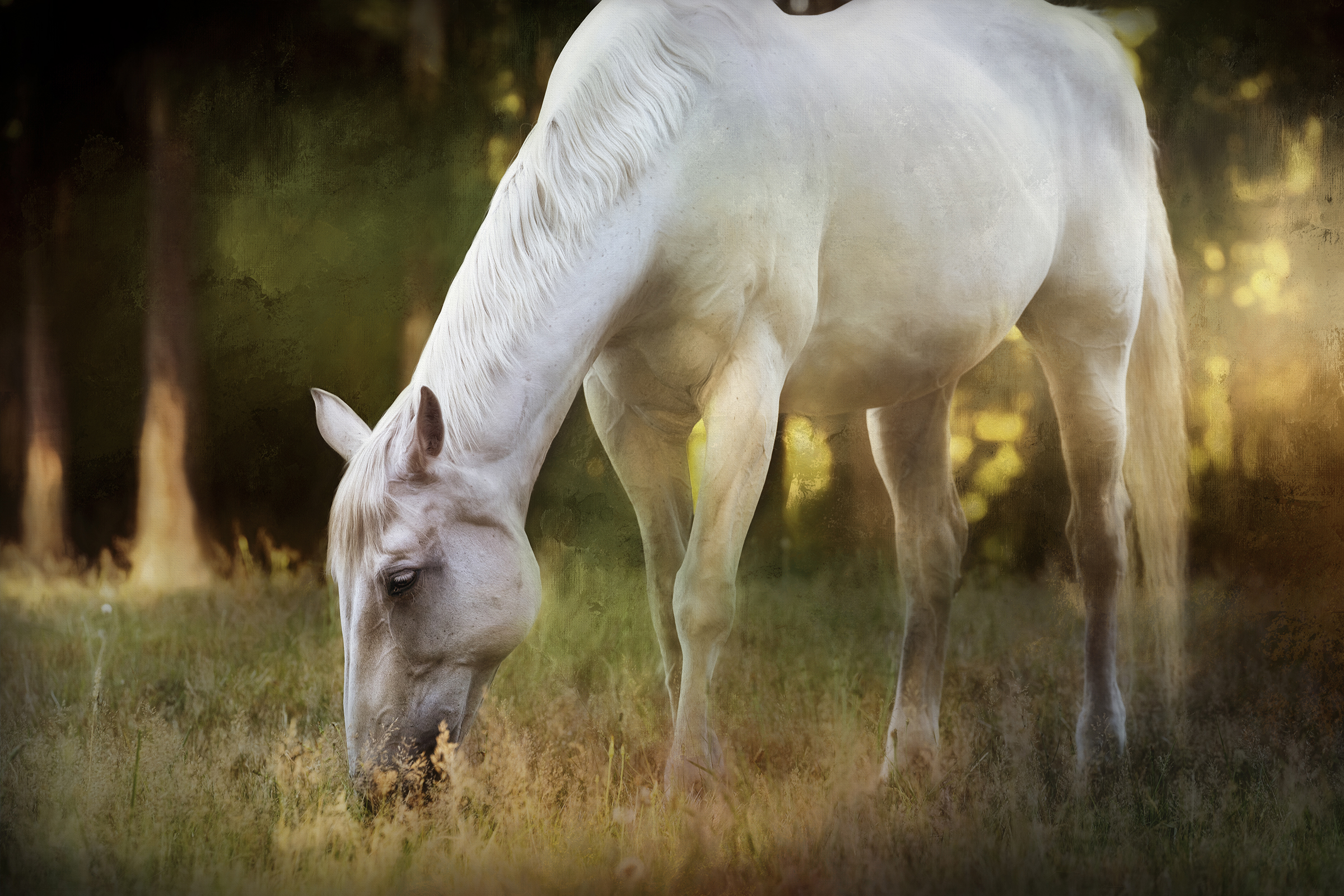 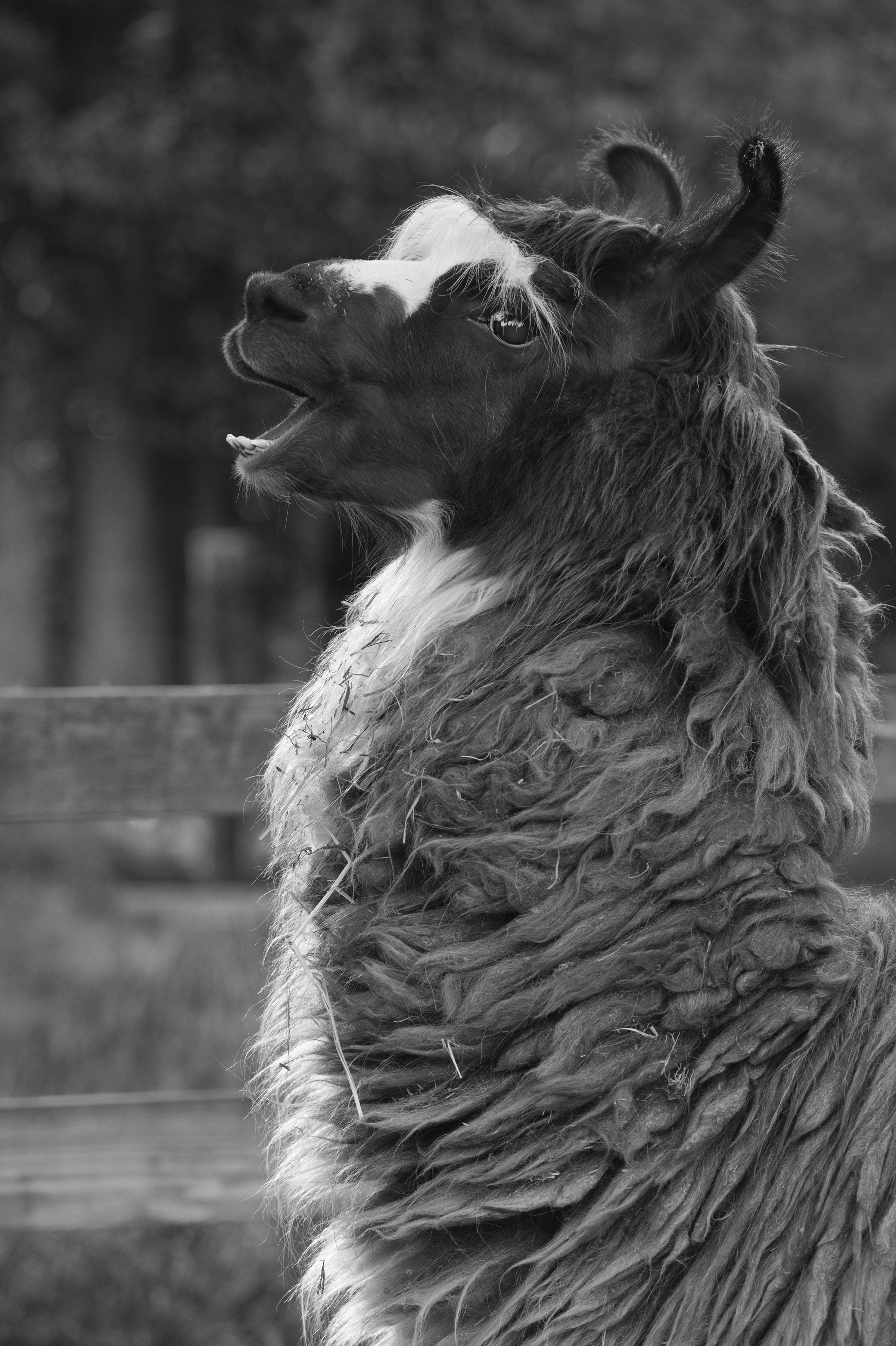 “One of my favorite rescue organizations is Stillpointe Llama Sanctuary. I have spent many a cold frosty morning there, and some beautiful summer evenings as well, capturing the personalities of their critters. One, in particular, named Cowboy really caught my eye. He was (and still is) a stunningly handsome llama. He was blind and thus very alert to everything around him. His ears always alert, his expression always open.

“I’m sure he knew more about what was going on around him than all the others combined. How he became blind is a mystery. But he he lives a very quiet, peaceful and safe life at Stillpointe. He can navigate the pasture without worry, rest comfortably in a shaft of warm sunlight, and food shows up twice a day without fail. He has llama friends, and a good human in his life.” 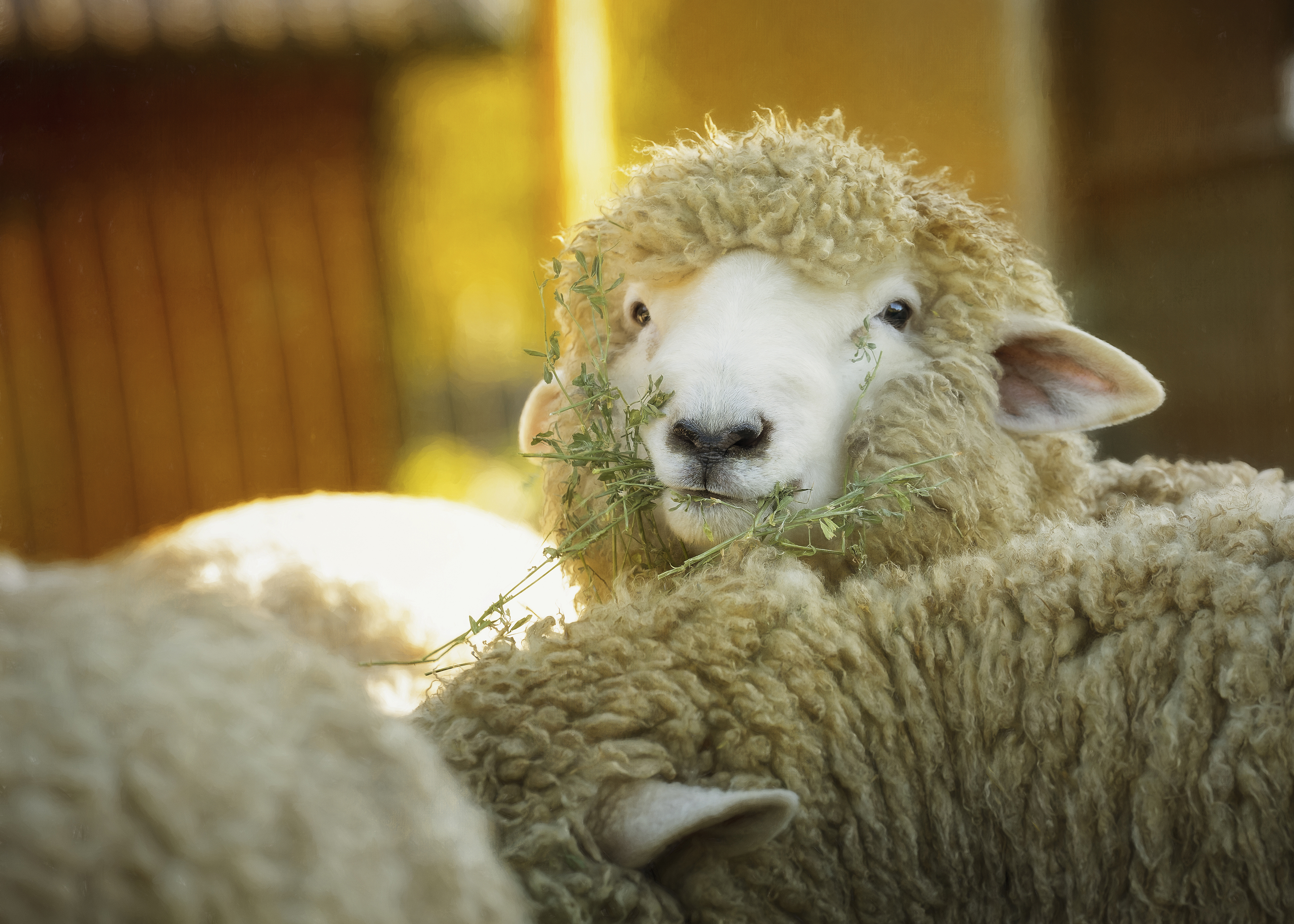 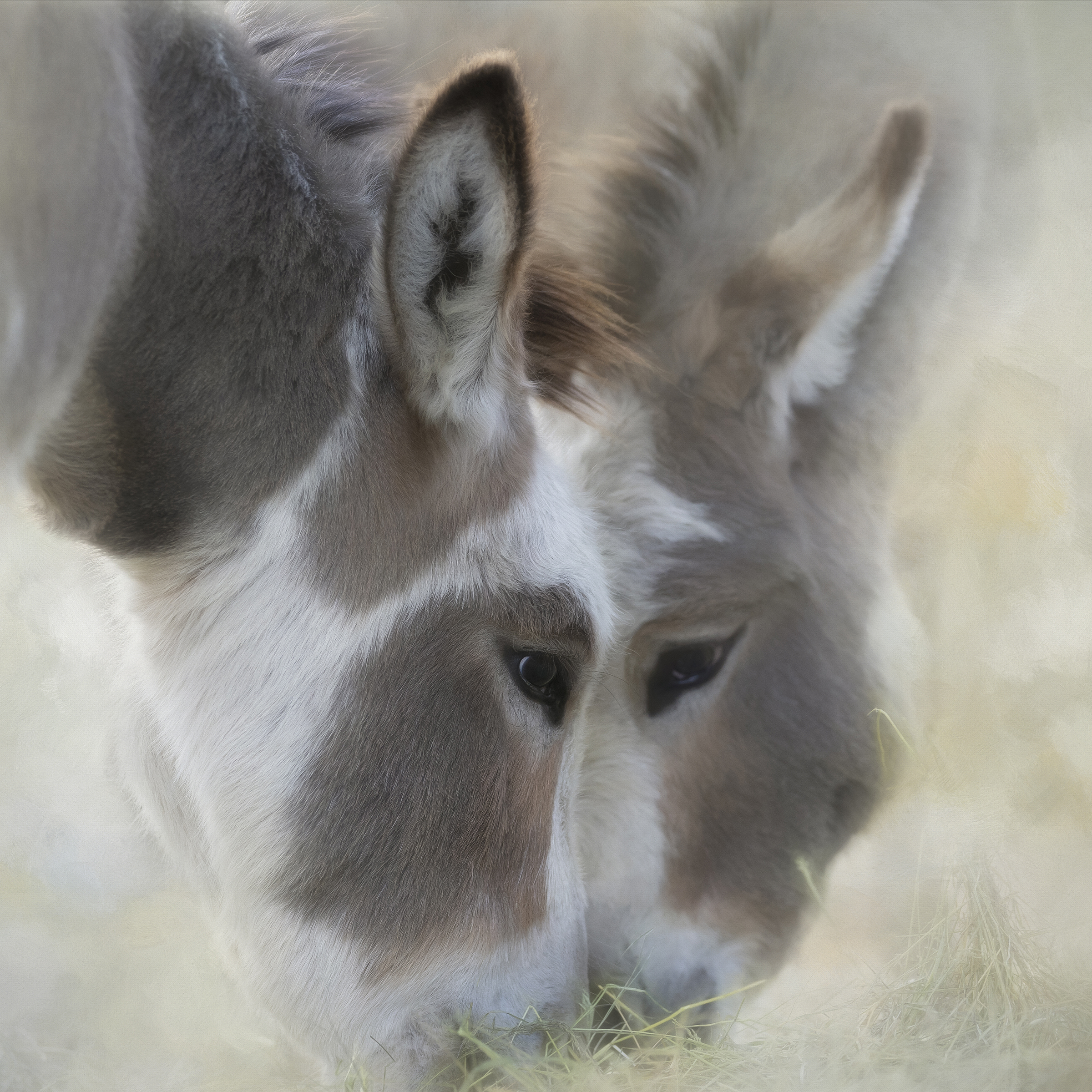 “One of the most fun shoots I’ve done with rescues is with a mother daughter pair of donkeys. Gin and Tonic are their names. I was invited to photograph them on a hot day in summer. The owners were out of town at the time, so I didn’t get a chance to hear their story aside from it involving neglect. This family is very involved with equine rescue. They open their pastures to some of the most tragic cases of abuse and neglect. Wonderful people.

“These two donkeys were a funny pair. Full of mischief and humor. Stealing the hat off my head, untying my shoes, pushing me from behind when I was trying to stand perfectly still. They followed me around like puppies. I couldn’t get more than a couple of feet away from them without them moving in closer. Try asking a donkey to stay put. Ha! Not going to happen. I spent more time laughing than shooting that afternoon.” 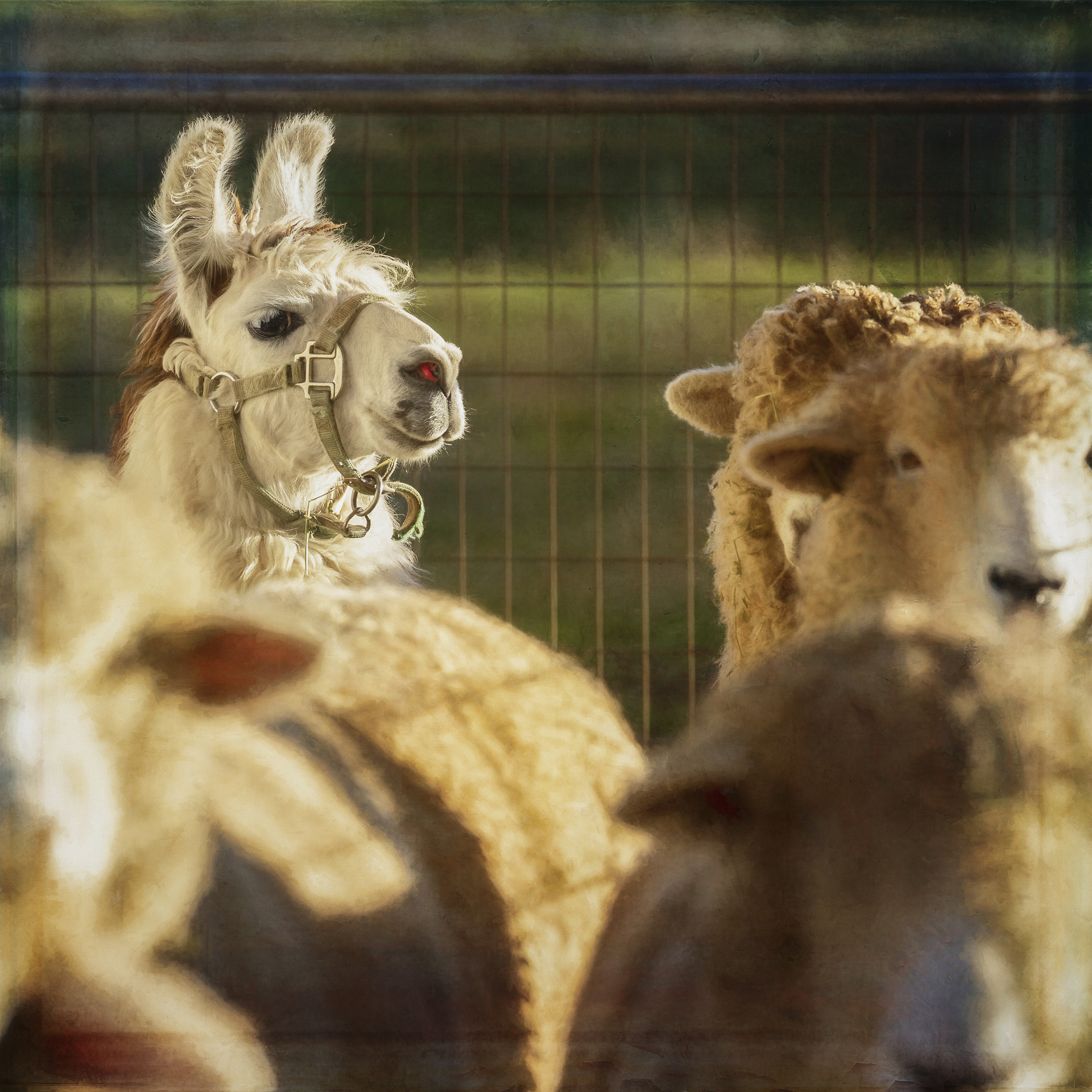 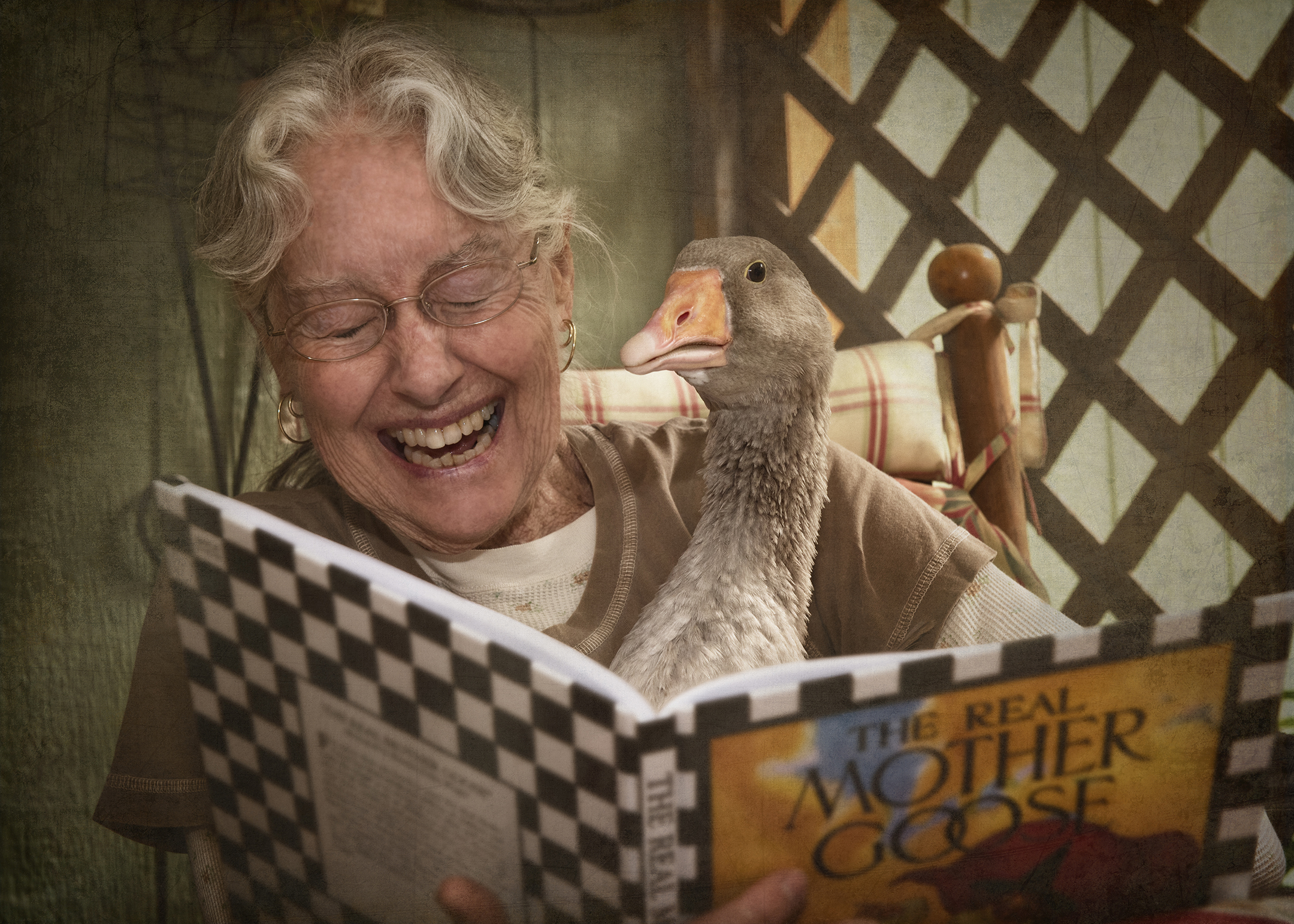 “This woman has a small hobby farm up north of me with goats and sheep and a goose named Abby. Abby is no ordinary goose. Abby is hand-raised, lives in the house, and has a very special relationship with this woman. When I heard about Abby, I just had to meet her. I arrived with a copy of Mother Goose, and we proceeded to create a scene in which this woman read mother goose to her goose.

“It worked spectacularly and was another extremely fun and funny afternoon. We discovered was that Mother Goose was not altogether about pleasant things. And when she would read a dreary line, the goose in her lap actually looked shocked, and we would start laughing and the expressions exchanged between the two of them were priceless.” 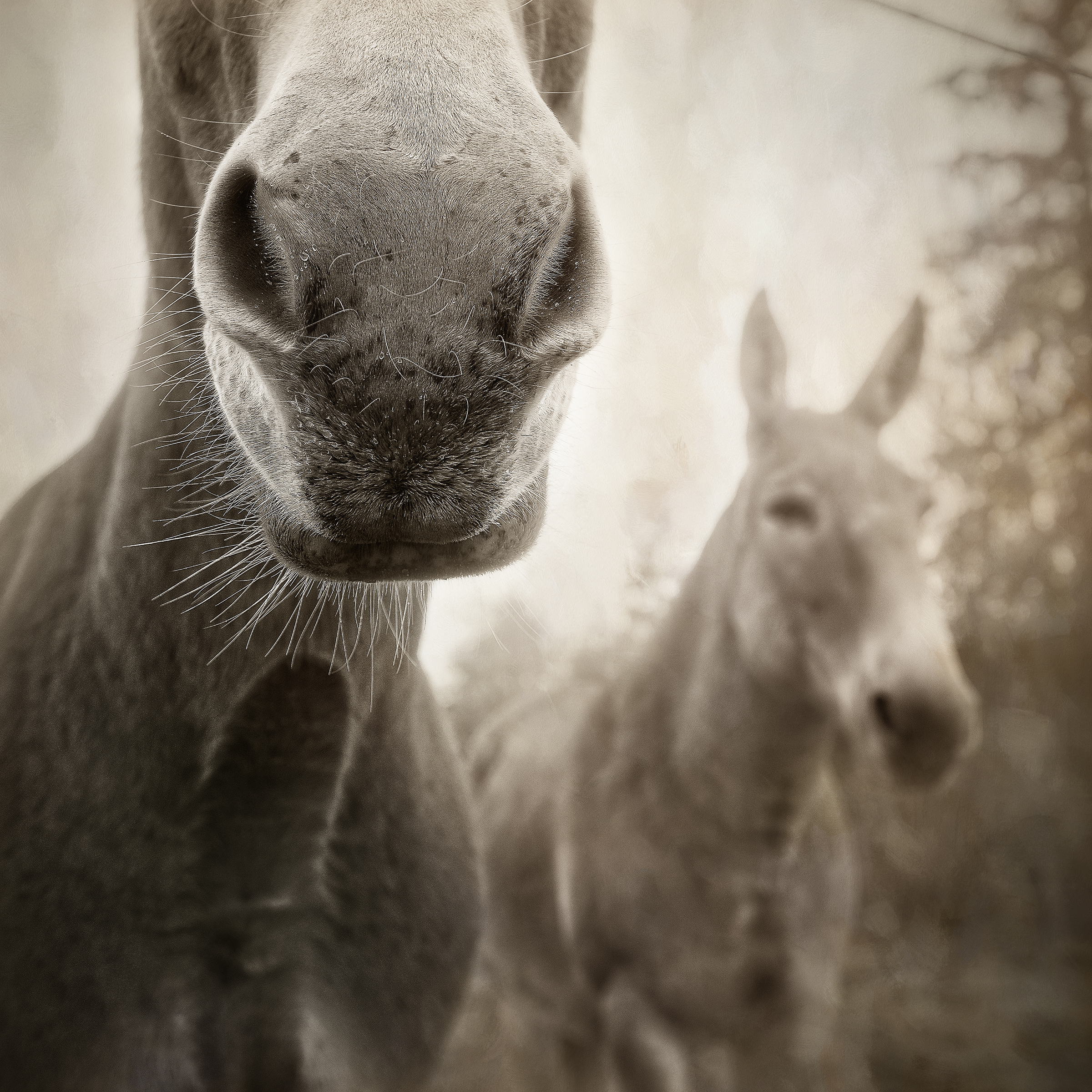