We talked to Cortis and Sonderegger, the ingenious duo that recreates history’s most iconic photographs with miniatures 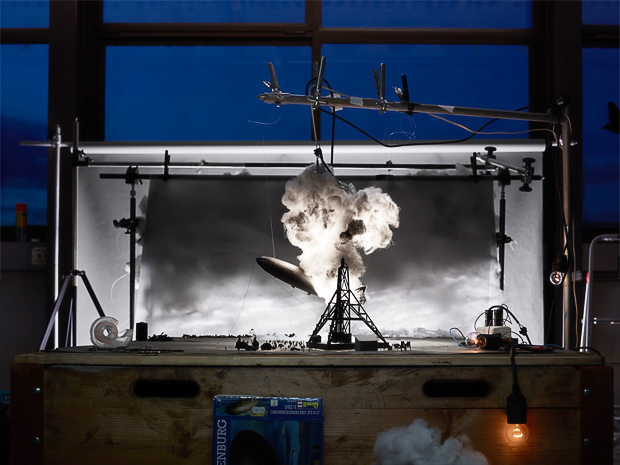 Unless you were abducted by aliens over the last couple of years, it’s highly likely that you’ve seen one way or another the work of Swiss photographers Jojakim Cortis and Adrian Sonderegger.

Time Magazine, The New York Times, Vice, Buzzfeed, and practically every major news outlet under the sun has covered their ongoing project “Icons”, in which the duo set out to recreate with miniature models the most emblematic photographs in history.

Their partnership started back in 2005 when they were studying photography at Zurich University of the Arts. That fruitful creative collaboration extended to their professional career with their own studio, landing over the years many high profile gigs with clients like Greenpeace and leading cookware manufacturer Kuhn Rikon. 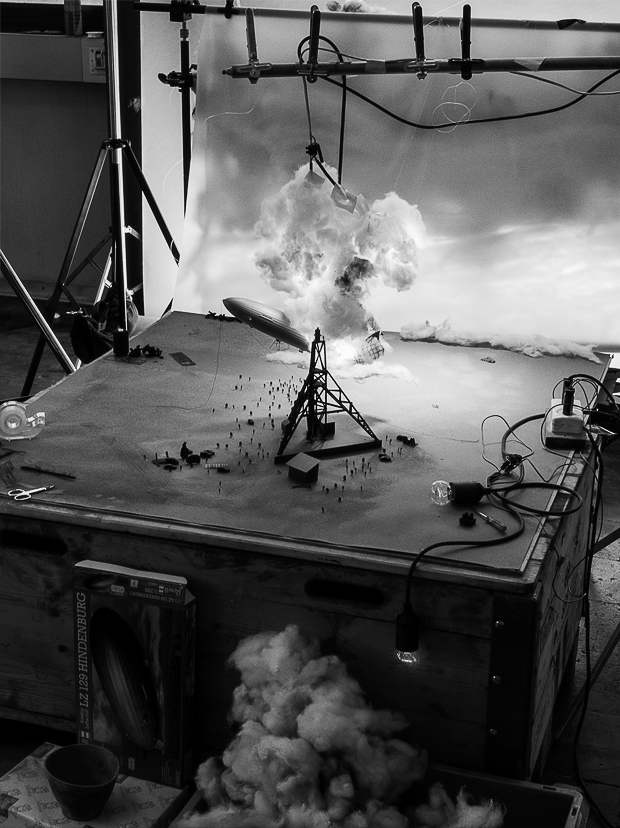 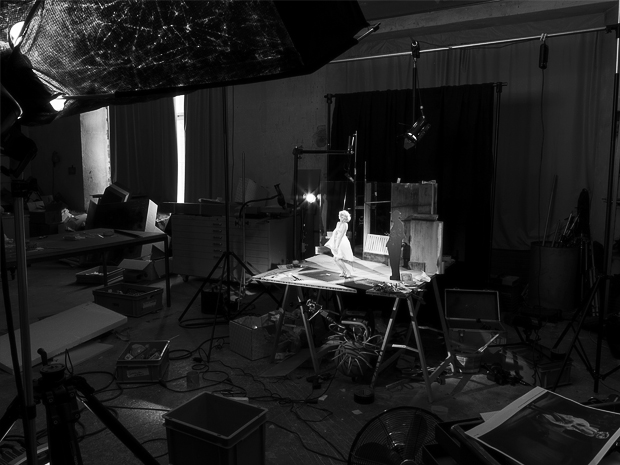 “Icons” started in 2012 both as a joke and as a way to keep themselves busy during downtime. Their first experiment was to recreate Andreas Gursky’s infamous Rhein II, at the time the most expensive photograph ever sold. (a record broken in 2014 by Phantom, by Australian photographer Peter Li)

Armed with cardboard, cotton wool, sand, glue, tin foil paper and many other materials that at first glance would seem more appropriate in a school science fair than in a professional studio, the creative team started to painstakingly recreate with miniatures the most significant photographs in history.

Among their recreations, we can find cultural symbols like Pennie Smith’s cover for London Calling, transcendent historical events like the 9-11 attack on the World Trade Center, and decisive moments in the evolution of photography like Niépce’s View from the Window at Le Gras from 1826, the earliest surviving photograph of a real-world scene. 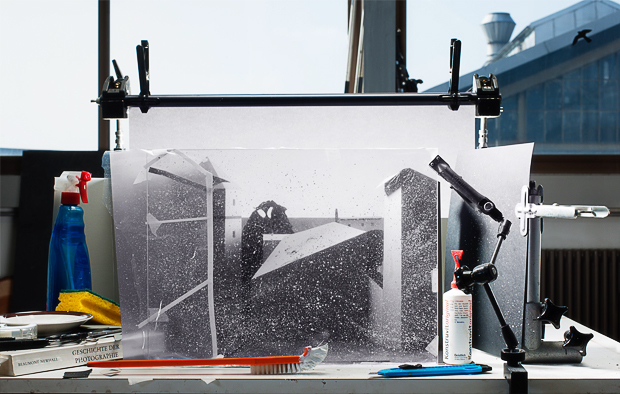 But as precise as these miniatures can be, Cortis and Sonderegger want to make it perfectly clear that it’s all an illusion, pulling back the camera slightly from the original framing, like a magician exposing their most famed trick.

All the paraphernalia behind the scene is revealed in their photos; a glimpse of the studio, the light stands, glue guns, rolls of tape and other materials scattered here and there. The work serves as a fascinating reflection about the nature of truth and the ability of photography to capture reality. Can we truly believe a photograph, more so today, in the era of Photoshop and Deepfakes? What is “the truth” anyway?

Recreations of extremely shocking and grisly historical photographs like The Shirt of the Emperor, Worn During his Execution, (depicting the bloodstained, bullet-riddled shirt of the Austrian Archduke Maximilian I) or The Hooded Man from Abu Ghraib prison, acquire a new, different level of macabre, while snaps like the famous The Surgeon’s Photo depicting the Loch Ness monster become even more amusing and endearing. 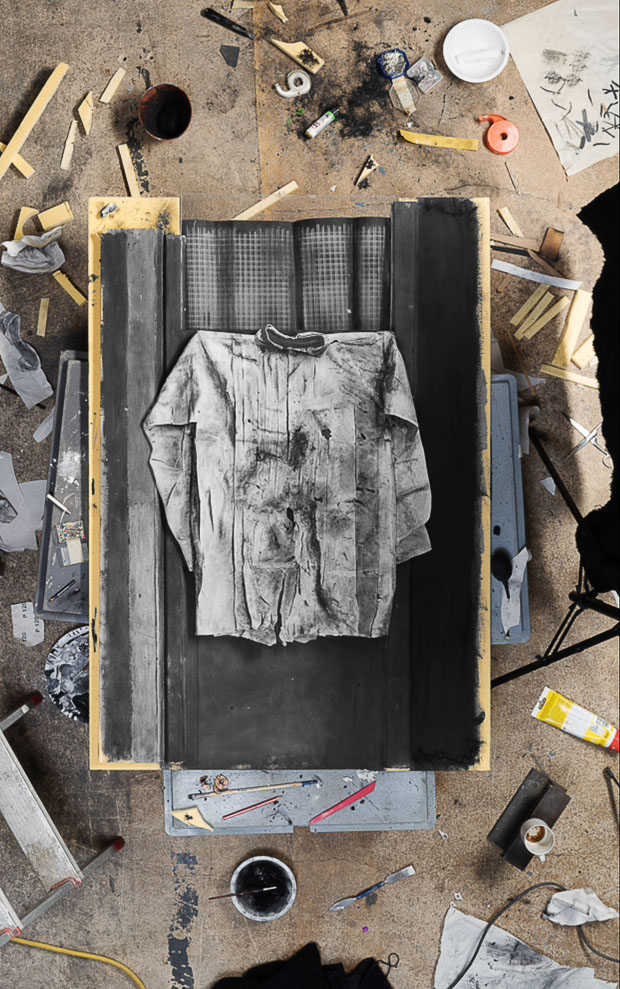 Some of these recreations take days, while others, like Jeff Widener’s celebrated photo of the protests of Tiananmen Square in 1989 required weeks.

Cortis and Sonderegger have been almost universally lauded for the series and had exhibited all over the world, from C/O Berlin photography gallery to East-Wing Gallery in Dubai. Publisher Thames & Hudson published in 2018 their spectacular monograph Double Take, which you can buy now at their site.

We had the immense pleasure of talking with the creative duo about the thought process behind such a crazy and marvelous project.

Where did you guys learn how to build miniatures? Was Rhein II the very first model you ever built?

Yes, Rhein II was the very first model we ever created. After studying photography, we earned our living with various commercial photographic assignments. But the desire to do a free project always slumbered within us.

During the summer of 2012, there was a doldrum and no money was coming in, so we had this crazy idea to rebuild the most expensive photographs ever sold as a model.

After recreating Gursky’s Rhein II we noticed, however, that it was more difficult than we previously thought to recreate the second and third most expensive photograph of Cindy Sherman, which shows close-ups of people. So at that point, the project shifted towards to what it is today. 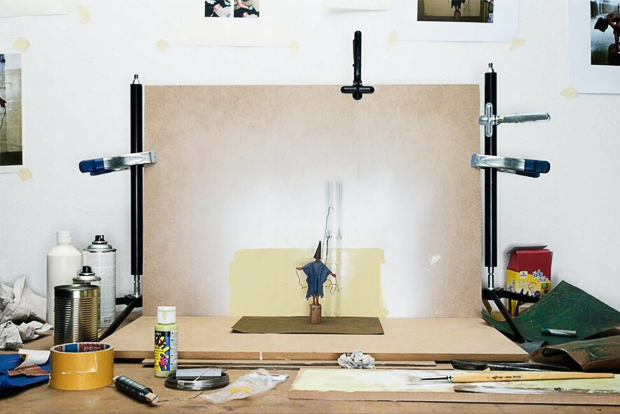 What camera gear did you use to make this series?

We started the project with a digital SLR camera. But because we lacked the detail, we soon decided to switch to medium format. We have the relatively inexpensive Pentax 645Z. The lighting is done by Broncolor studio flashes, as you can easily guess from the pictures.

How did you match the focal length of the original photographs? Did you eyeball it or did you use any software?

That’s a good question. We always start by studying the original photograph and try to find out all its details. The most important thing at the beginning is the focal length of the lens so that the model can also be reproduced relatively true to scale. We just eyeball it and start the building process. Sometimes we also change the lens while the model is still being assembled. 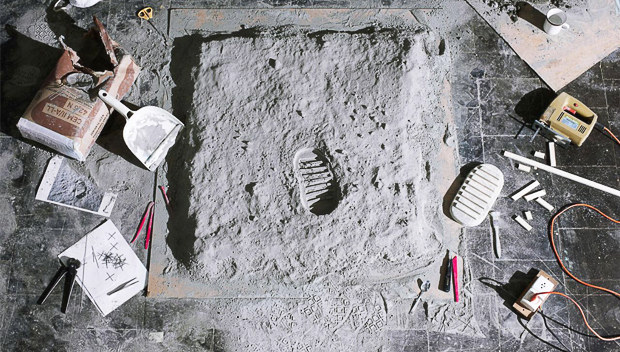 One of your intentions with “Icons” is to expose the whole staging process to reflect on the concepts of memory and reality. Yet, I’ve seen people online disappointed that you didn’t include the shots without the studio elements in the composition. Do you think your work would have the same impact if you decided to frame out the illusion? Did you ever consider it during the process?

Honestly, we have to admit that in the beginning, it wasn’t the idea to show the surroundings of the model in the composition. But we quickly noticed that a new layer was being added, one that would make the photographs stand out from a mere copy and raise interesting questions. Without the frame around the picture, the statement would be completely different. 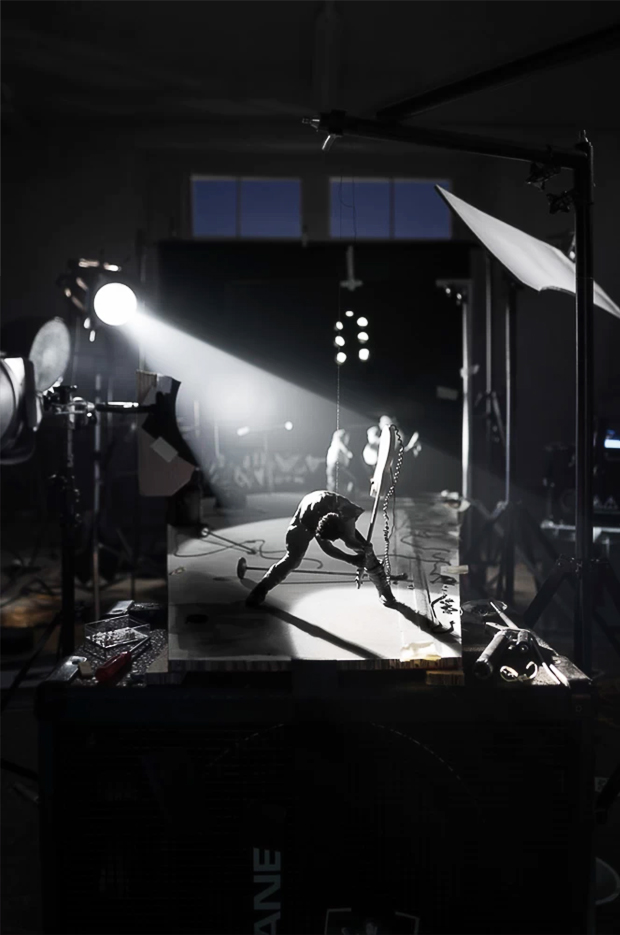 We’re now witnessing a pivotal moment in history in which technology is making of “truth” a malleable concept. Stuff like Deepfakes is turning reality into something that you can custom tailor to your specific needs. How do you think this will impact photography?

The upheaval is quite severe and has also caused some skeptics to proclaim the death of photography. Basically, photography is being challenged by new technologies such as Computer Generated Images (CGI).

This questioning position is also good, but one must be careful not to mix classical photography with new technologies. Although the new possibilities are related to photography, they are something completely new in terms of methodology and meaning. 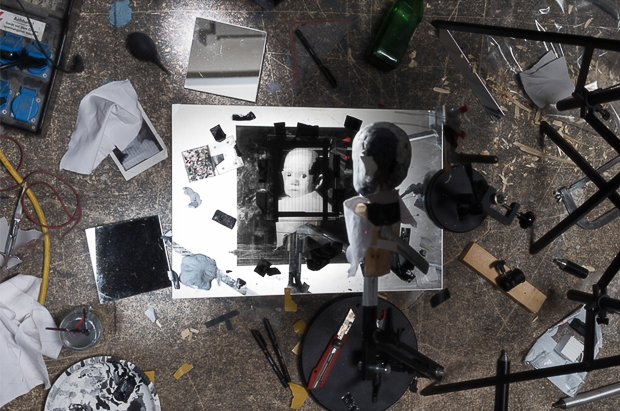 Which photographs were tougher to replicate? Those originally in black & white, or those in color?

It doesn’t matter whether the original photograph was colored or in black and white, what’s challenging is the number of details and human characters in the picture.

Basically, we are now at a point where we can rebuild anything, given enough time. That was different in the beginning. In our book DOUBLE TAKE you can see relatively well our development as model builders. Our first model, Gursky’s Rhein II, that one we would definitely do differently today, probably more precisely.

How did you make the human characters and tiny clothes in your dioramas? Did you use 3D printing during the project?

Taking 3D printers would’ve been too easy for us. It’s all about the handmade. So it’s important that you can still see the many details and inaccuracies, especially when looking at the large prints in an exhibition. 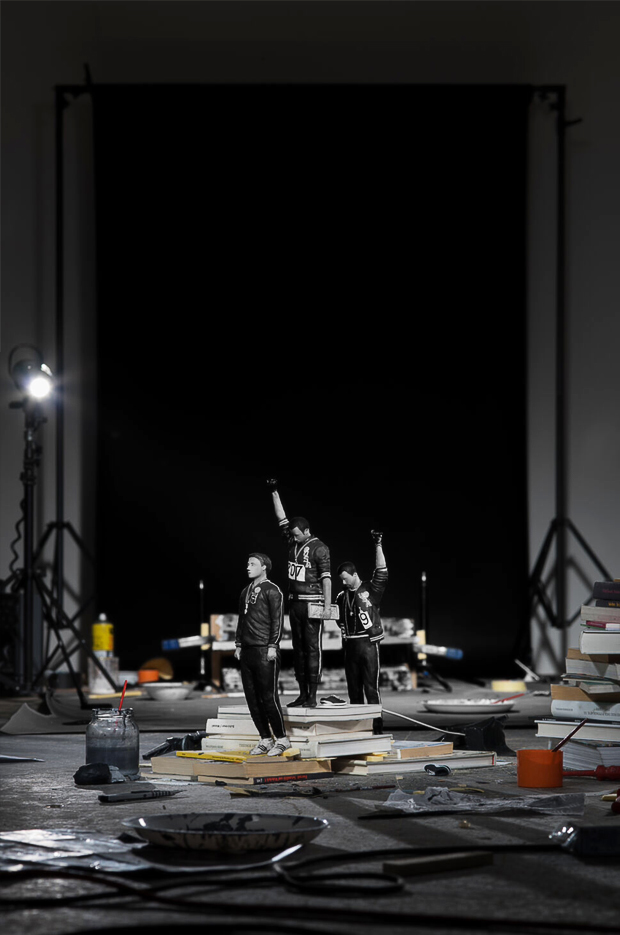 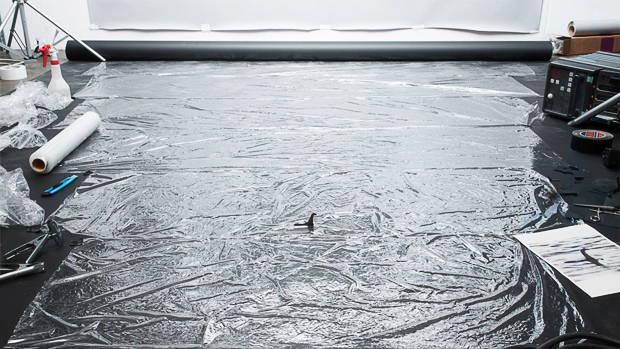 In times when the very concept of “truth” and “fact” are being put into interpretation, and politicians all over the world are going as far as rejecting science and attempting to redefine history, what do you think is the role of a photographer in this new “post-truth” scenario?

Photography is and remains a wonderful medium to say a lot as quickly as possible. A picture says more than a thousand words…

The abuse of it, for example, the manipulation, the omission of details, or even just the wrong context turns images into instruments of power, which can be abused.

Media has a lot of power. Our project can be seen as a stumbling block that makes us pause to look at the pictures closely and reflect on the context. Not everything you see is true. 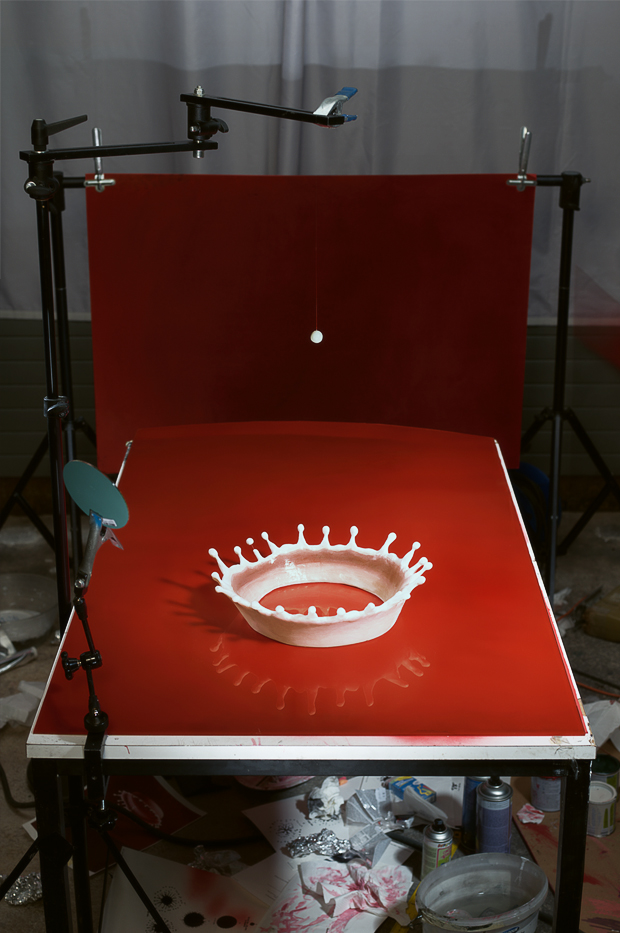 Of all the iconic photographs that you’ve replicated so far, which one has been the toughest, and which one the “easiest”?

Let’s start with the simplest: That was Loch Ness. The picture is very simple, shows only a water surface and the neck and head of the monster, which is only recognizable as a silhouette due to the strong backlight.

There are many difficult and complex pictures, one of them was Moon and Half Dome by Ansel Adams. We carved the mountain Half Dome out of PU foam and covered it with plaster. Then we painted the structures in countless layers with paint. Often we don’t even notice when it’s good enough. Often one has to say “Ok, that’s good!” so that you can stop. 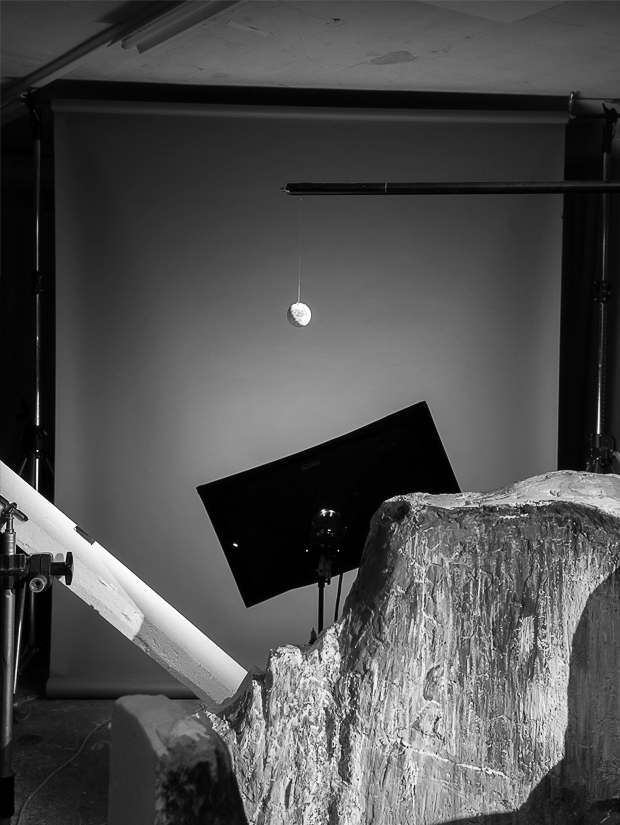 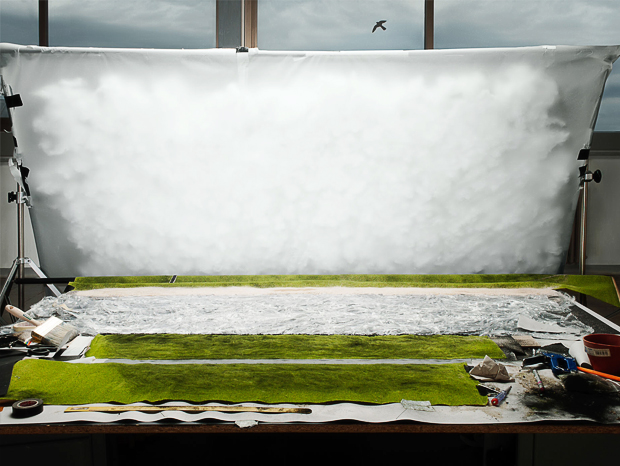 Is “Icons” still ongoing? Are you working on something new at the moment?

We haven’t quite finished with “Icons” yet. We still have some pictures in our collection that we would like to remake. There are picture icons like sand at the sea.

Nevertheless, we are currently developing a new project. But since it’s also complex — how could it be any different? — we have to stay with it for a few months or years before we can show something. 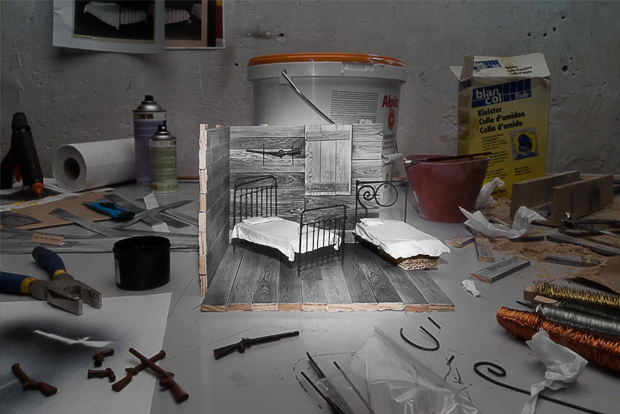 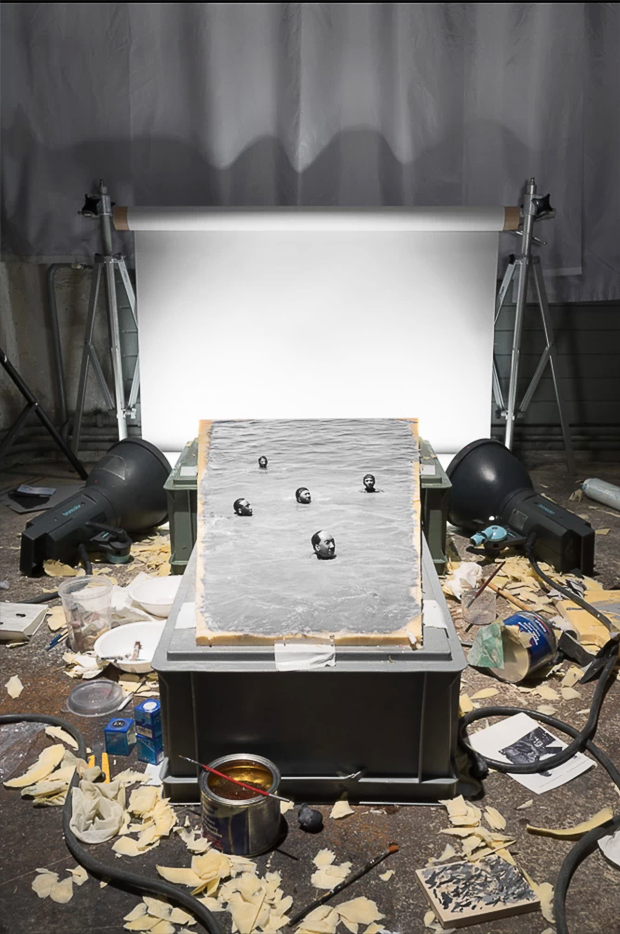 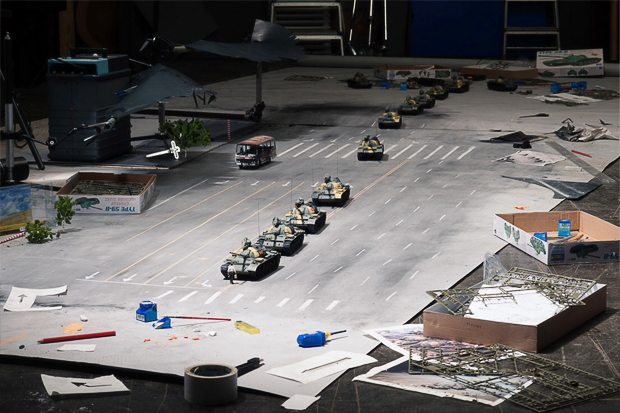 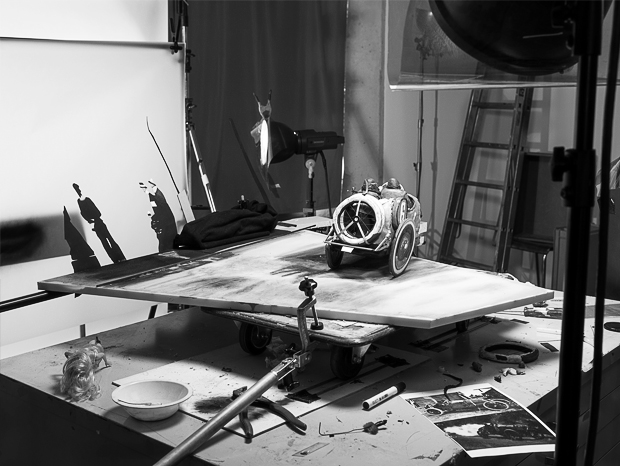 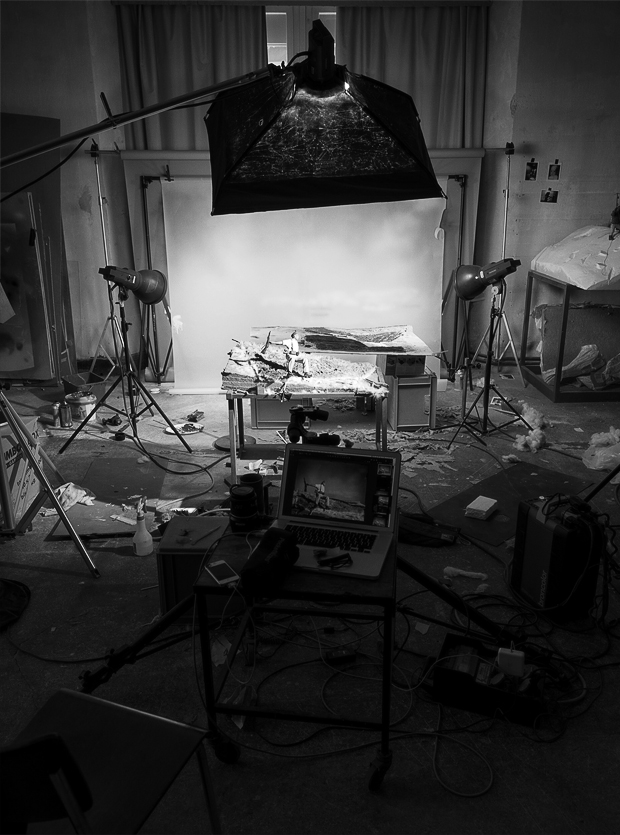 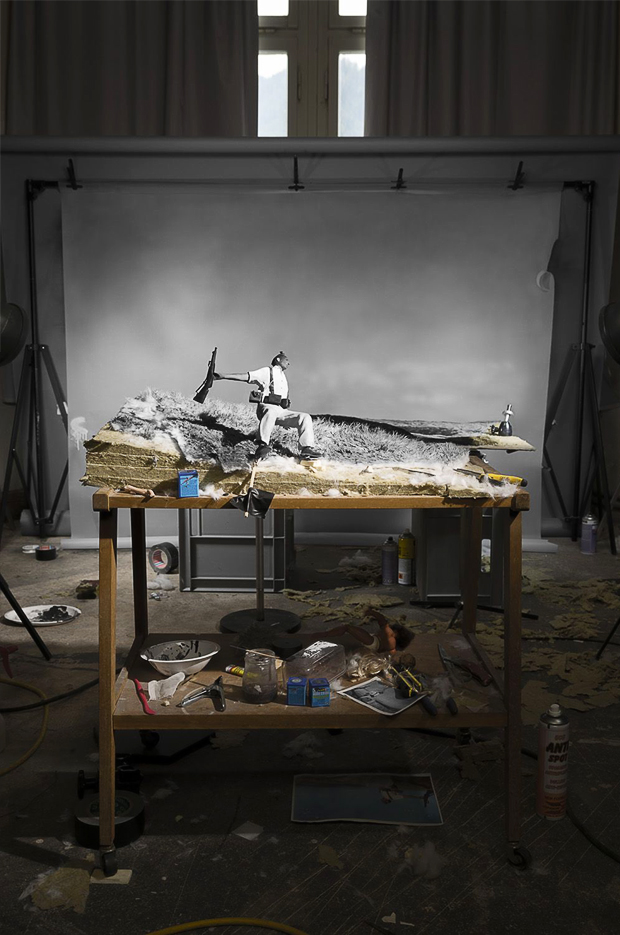