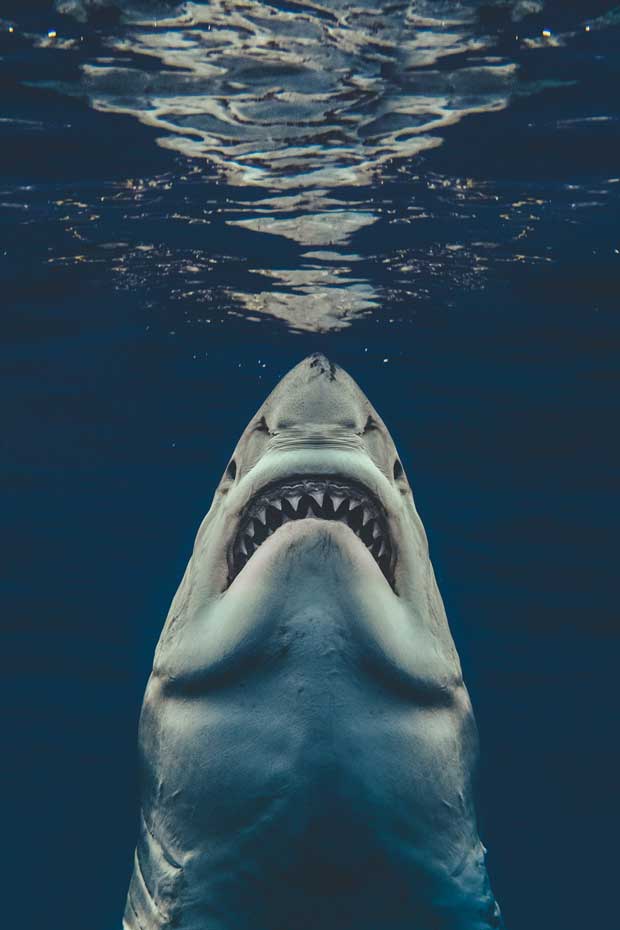 About a year ago, while shooting underwater off Mexico’s Guadalupe Island, photographer Euan Rannachan captured a picture that recreates the 1975 JAWS movie poster with an actual great white shark.

According to the 32-year-old British cage diver and creative, the 17-foot female great white was about 35 feet away from him when he snapped the shot. Although it wasn’t until later that night (while he was backing up his files) that he noticed the shark striking that familiar pose.

The painting used for the JAWS film poster was made by Roger Kastel, who based his creation off a taxidermy shark. Taking a photo with a real-life one, though, has proven elusive for many photographers.

That’s why Euan is ecstatic that he managed to do the rare feat.

“We have these people on the boat called shark wranglers and they throw these two-foot chunks of tuna and get the shark close to the surface,” he told The Sun.

“Sometimes when the wranglers play with the sharks, the sharks get p**sed off and dive down under the boat and the bait so they can come rocketing up and get it. That’s exactly what [the shark] was doing here, she was fed up probably messing around on the surface and dived back down under the boat.

“It was really deep there but the water clarity was amazing, and I just happened to be in the right spot seeing her coming up.”

We recently spoke to Euan to learn more about his photography.

We're teaming up with artist Roger Kastel – with help from @jasonedmistonart, Chris Billheimer, & Bruce Yan – to release the original JAWS poster artwork as a limited-edition silkscreen print! – On sale tomorrow (7/3) alongside THE SHARK art print at mondotees.com. 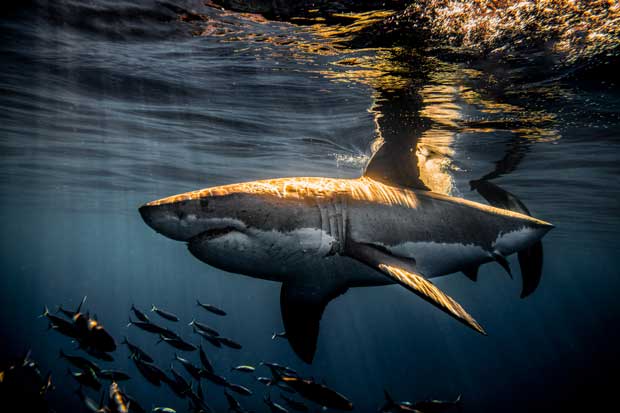 What led you to become so fascinated with sharks, and eventually, underwater photography?
“Where do I start. I have been obsessed with them since I was small. I think the thing that always excites me is how powerful they can be while at the same time being completely under control. It’s amazing to watch a 3,000 lb animal approach its target, flick its tail accelerate, and spin on a dime like nothing just happened.”

So what’s it like trying to take photos while being surrounded by the ocean’s apex predator?
“My number one goal from the start has been to show exactly how these animals are 90 percent of the time. Hollywood LOVES to make sharks the villain. There’s obviously a reason they are the apex predator, but once you know they are not interested in you as one of them passes a few feet away from you, the “fear” kinda evaporates. I hope my images help portray that.”

What was your reaction after realizing you snapped a pic that mirrors Roger Kastel’s painting?
“Honestly, I have not really had a moment to take it all in. I am feeling very appreciative and humbled for sure at the reaction of so many. But also very excited that I am able to share these toothy friends with more of the world. I get ‘you must be very brave’ a lot, and honestly, I’m not.

“But the thing is I have never felt scared around sharks so for me its an honor every-time in the water with them! I just hope my images are able to show people the other side of these animals.” 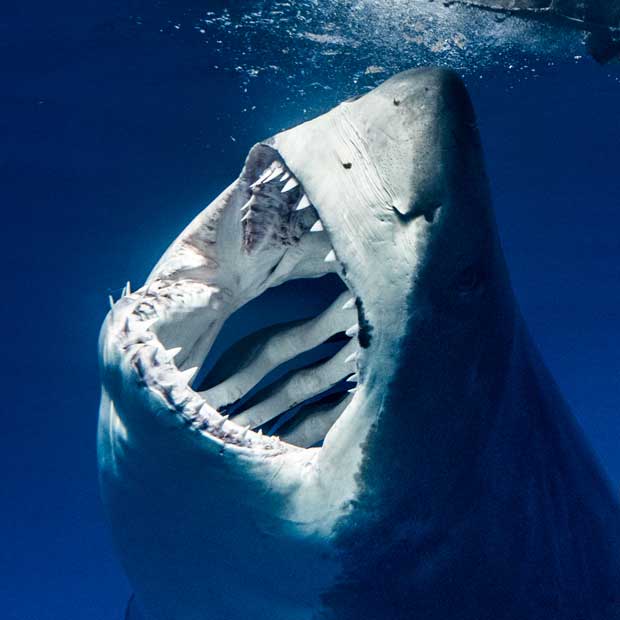 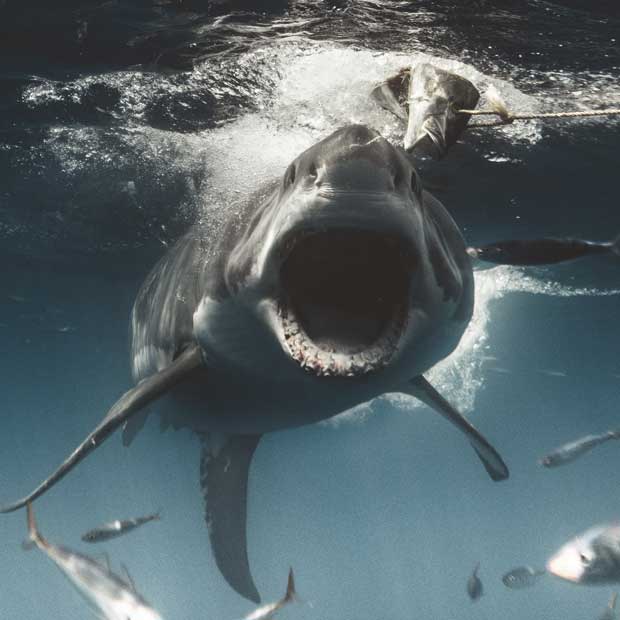 Could you take us through the moment you took that iconic JAWS photo?
“So this is a photo that a lot of my shark friends including myself have been trying to take for years. I had a feeling I had it but things happen so fast down there really all I could do was get ready for the next pass if there’s going to be one. It was not until much later that night when I was backing up footage that I saw I had it and most importantly IT WAS IN FOCUS.

“We have two cages in the back of the boat. The time in the cage at one go is only limited by how long you can take the ‘cold’ and how long your batteries and cards last. Every day is different down there. Some days are very sharkie other days you may see nothing at all.

“Guadalupe is arguably the best place in the world to see White sharks of this size. They come there for the large seal population. And most speculate they have one last big feast then go off and either make or have babies. A regular trip for me in three days of diving I capture about 5,000 images.”

What photography equipment do you usually take along on these cage diving trips?
“I’m a Nikon guy. I shoot with an aquatech housing and usually a D850. I use to shoot really wide using the Tamron 15-30 beautiful lens and unlike the Nikon has VR. But the last couple of trips I have switched to the trusty 24-70.

“Being able to punch in and then come back out has proved really useful but also quite tricky. You can’t get your eye right up to the viewfinder… so framing your shot gets difficult. But with the added megapixels from the 850 and the amazing AF I am able to nail what I’m after most of the time.

“I’m very against the grain when it comes to most of my settings. Most people like to set their focus and forget it. I have always trusted my Nikon to lock onto the sharks using single point focus in the middle of the frame and then letting it track it as long as I have it locked on correctly. I also shoot wide open on my lens trying to get the fastest shutter speed I can get. The last thing you want is a sweet open mouth shot ruined because your shutter speed was not up for it.”

For anyone who wants to do what you do, how do they get started?
“For the longest time, I had no idea anyone was able to go cage diving with white sharks. It was not until I finally did some digging I saw you can in loads of places around the world. Guadalupe is one of the best places but it’s not easy to get to. This can be an issue for some but for me, it’s one of my favorite parts.

“Photography is all about sticking with a subject until you capture it the way you want. I believe this simple fact separates a lot of people who like to take photos and true professionals. Dedication to getting the shot takes on a lot of different forms but in this type of photography, it means, STAY IN THE CAGE as long as you can. Get out get warm, change your cards, and get back in.

“If you’re not putting yourself in the position to take the photo, you are never going to get it. Study your subjects and if they are animals that move quickly try and predict where the actions are going to go. I shot NHL for a while and photographing sharks and shooting a sport like hockey you can draw some very large parallels. It’s all about knowing your gear inside and out and then putting yourself in the best position to get the shot you are after.”

You can see more of Euan Racchanan’s work here. 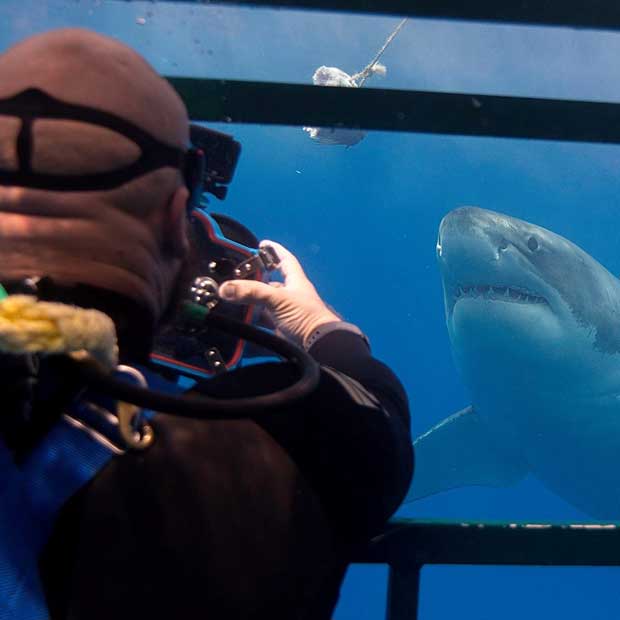