Poignant Photos of Rescued Farm Animals in Their Twilight Years 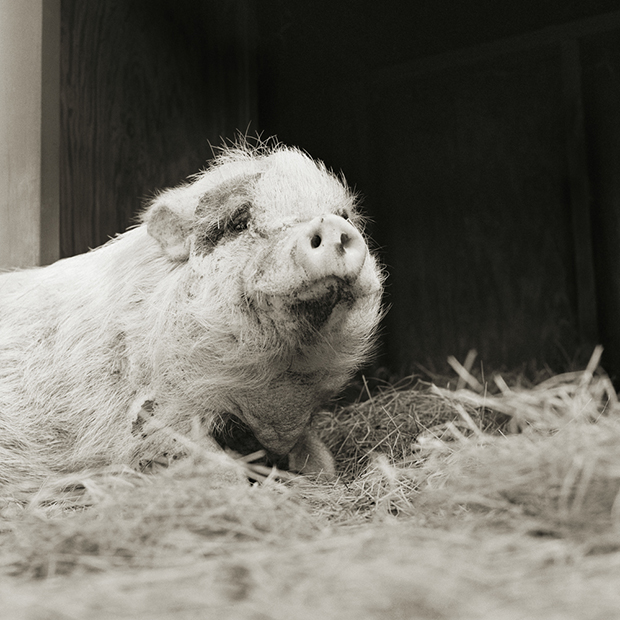 Violet, a potbellied pig, age 12. Born with her rear legs partially paralyzed, Violet was surrendered to a sanctuary because her guardian could not properly care for her special needs. 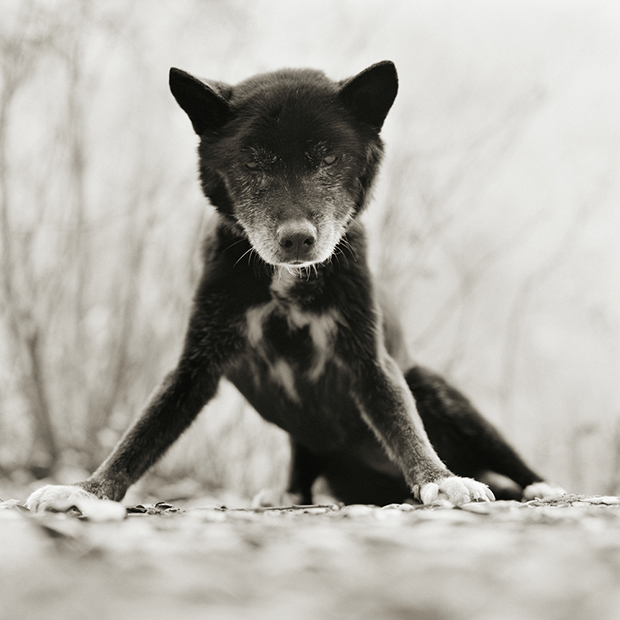 Blue, an Australian Kelpie rescue dog, was a companion for 21 years. 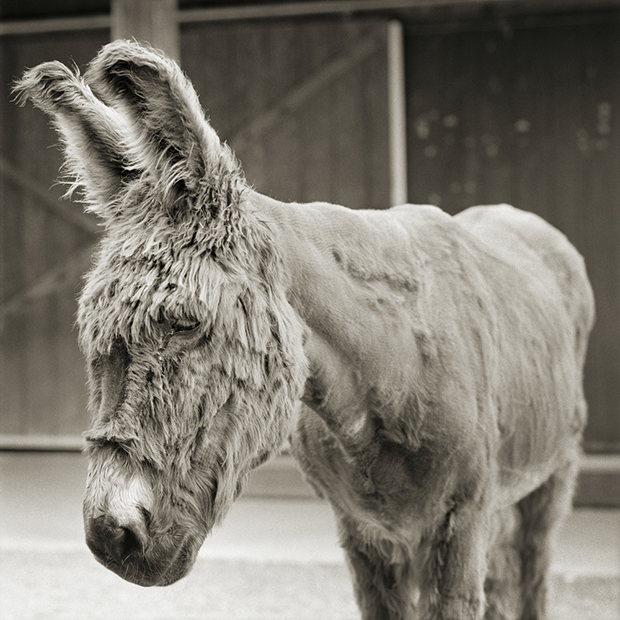 Babs, a donkey, spent seventeen years of her life at a cattle ranch, where ranchers used her for roping practice. “Roping involves electrically shocking a donkey to make her run, chasing her on horseback, and then tossing a lasso around her neck or rear legs to pull her to the ground,” the photographer Isa Leshko writes in her book Allowed to Grow Old. “Donkeys endure this practice repeatedly until they are exhausted, maimed, or killed.”

In spite of all she had suffered in her lifetime, Babs found happiness in her golden years. By the time Leshko met her, the elderly donkey had been rescued by Pasado’s Safe Haven in Sultan, Washington. Although the photographer could still see the shadows of old traumas in her eyes, Babs had made lifelong friends at the sanctuary, including a blind shetland pony named Peach Pie and two young goats, Jacques and Ole.

Babs is one of many individuals featured in Allowed to Grow Old, out now by the University of Chicago Press. For nine years, Leshko visited sanctuaries around the country, encountering animals who had been rescued from abuse, neglect, and cruelty. She photographed donkeys, horses, cows, pigs, chickens, goats, sheep, turkeys, and more–the vast majority of whom were at one point destined to suffer and die at the hands of humans.

By luck and perseverance, these animals spent the final chapter of their lives peacefully. But their mothers, fathers, siblings, and fellows were not so fortunate. Around the world, fifty billion land animals are factory farmed annually. Most do not make it past six months. Leshko’s book is as much for the many who did not survive as it is for the few who did.

The photographer started her work with elderly animals at around the same time as her own mother struggled with advanced Alzheimer’s disease. She did not photograph her mother during this time, and in the beginning, a few of the animals she met inevitably reminded her of her mom. The first negatives from the project remained private for about a year until she was ready to return to them.

While the initial pictures might have emerged from a period of grief, they evolved to become emblems of resilience and hope for a better future. With time, Leshko’s perspective on aging shifted. For farm animals, advanced age is a rare gift. The photographer has spent hours on the ground, contentedly watching pigs and turkeys sleep in the sun. She’s seen a pig named Teresa play with a beach ball. She’s been greeted by an excited goat named Melvin, who routinely placed his front hooves on the gate of his enclosure whenever he saw a friendly face.

The sanctuary visits have brought Leshko moments of profound joy, but that’s not to say she hasn’t mourned too. She’s cried hearing the stories of these animals’ former lives. And due to their breeding and confinement in factory farms, these individuals often develop serious health problems. “Most of the animals who appear in this book passed away within six months to a year after I had met them,” the artist writes. “On a few occasions, an animal died the day after I photographed her.”

Still, when sanctuary animals die, it isn’t violent. Sanctuary caregivers spend nights sleeping beside sick animals, tending to their needs. If euthanasia is the most humane choice, the individual dies in the company of his or her human and animal friends. In some sanctuaries, staff members scatter the ashes of those they’ve lost, and in others, you’ll find a garden with carved stones, each dedicated to someone who has passed away.

Allowed to Grow Old is an acknowledgment of the failings of the human race–grave injustices perpetrated against unseen and unheard animals. It’s also a tribute to the power of forgiveness and the possibility of redemption.

Babs died a little over a year after Leshko first made her portrait. The photographer was able to visit her about a month before her passing. Though her diet had been restricted due to her Cushing’s disease, Babs spent her last day eating treats like strawberries, peppermints, apple pie, and more. “For weeks after her death, Babs’s stall was left untouched,” the photographer writes. Her old boots and blanket sat in the corner, and people left flowers in the spot where she’d slept.

Find Allowed to Grow Old here. See an exhibition of the work at Richard Levy Gallery through June 7th, and stay tuned for upcoming shows and events here. 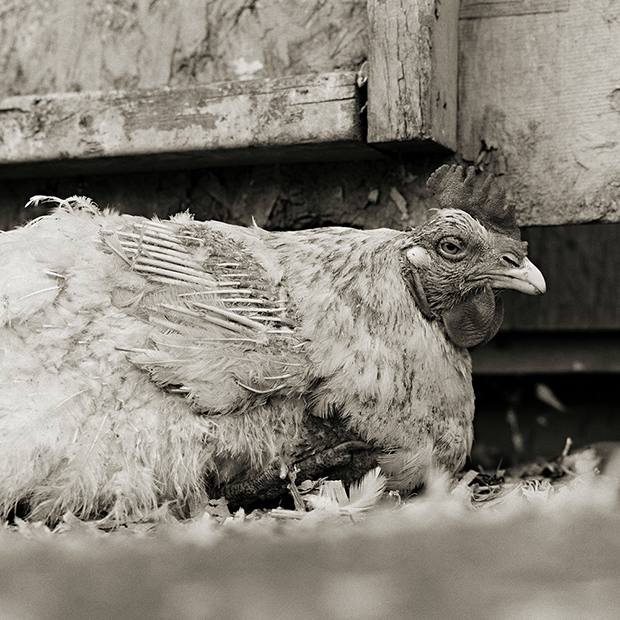 This rooster, age unknown, was a factory farm survivor. 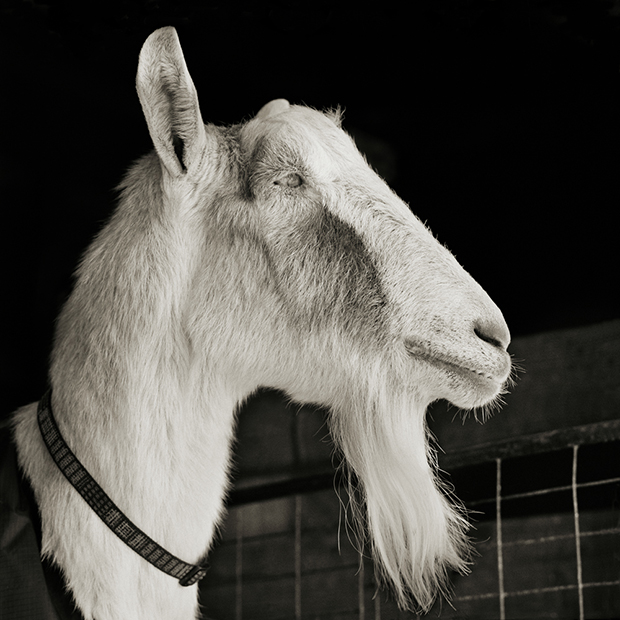 Abe, an Alpine goat, age 21, was surrendered to a sanctuary after his guardian entered an assisted living facility. 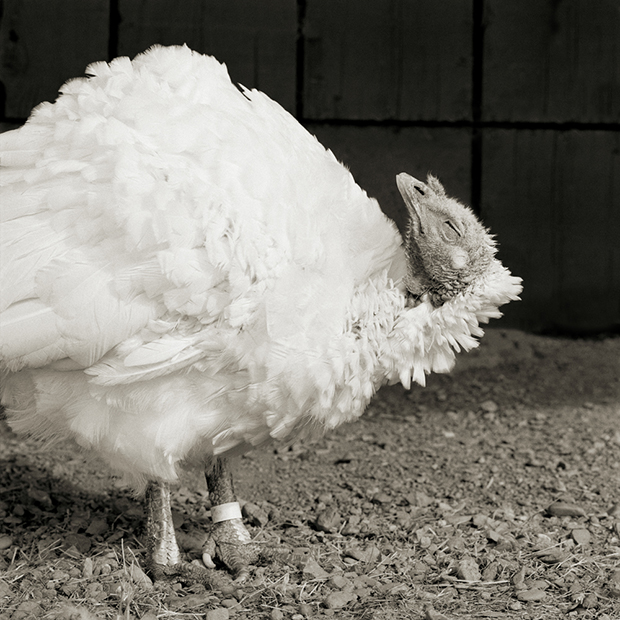 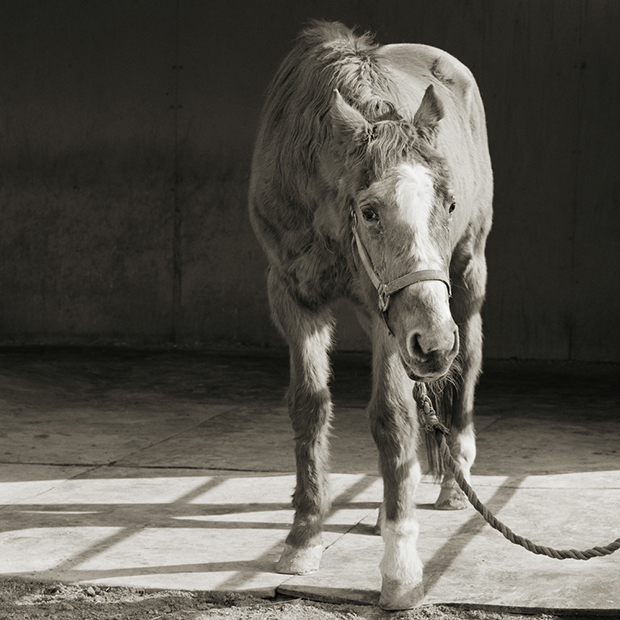 Handsome One, a Thoroughbred horse, age 33, was surrendered to a sanctuary when he retired from racing. 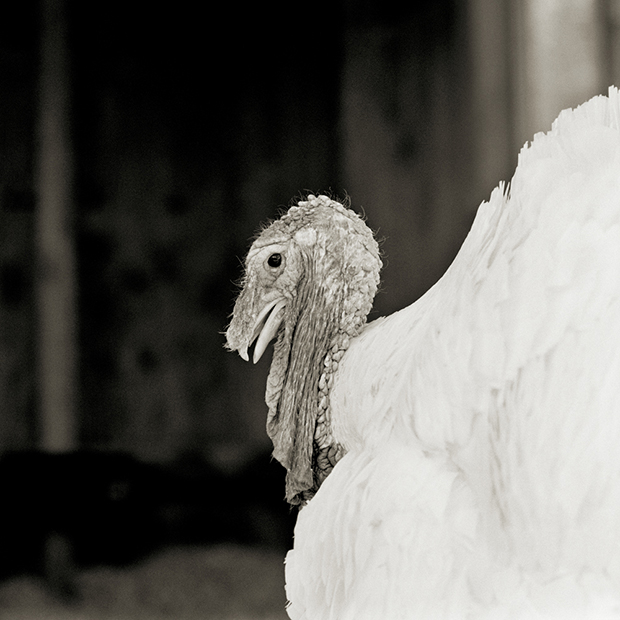 Sierra, a White Holland turkey, age 3, was rescued as a young poult from a commercial hatchery that supplies turkeys to factory farms.