New book, Images in Transition, makes us question the notion of truth in photo journalism 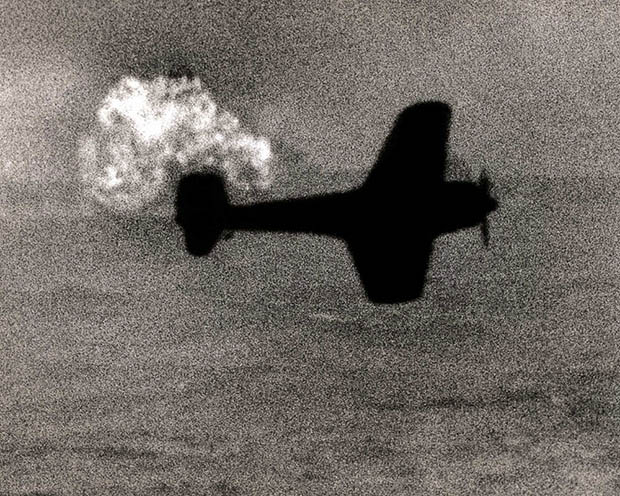 David Pace got his first camera when he was just eight years old — a little plastic Kodak Brownie Hawkeye. Since then, he has displayed an exceptional ability to portray raw, lingering emotion through his photographs.

Whether it’s mundane scenes of suburban life in the 1960s or artisanal gold mining in Burkina Faso, you can always find something relatable in David’s work. It conveys the complex vagaries of humanity, each frame an invitation to find connections between the subjects he photographs and our own life. 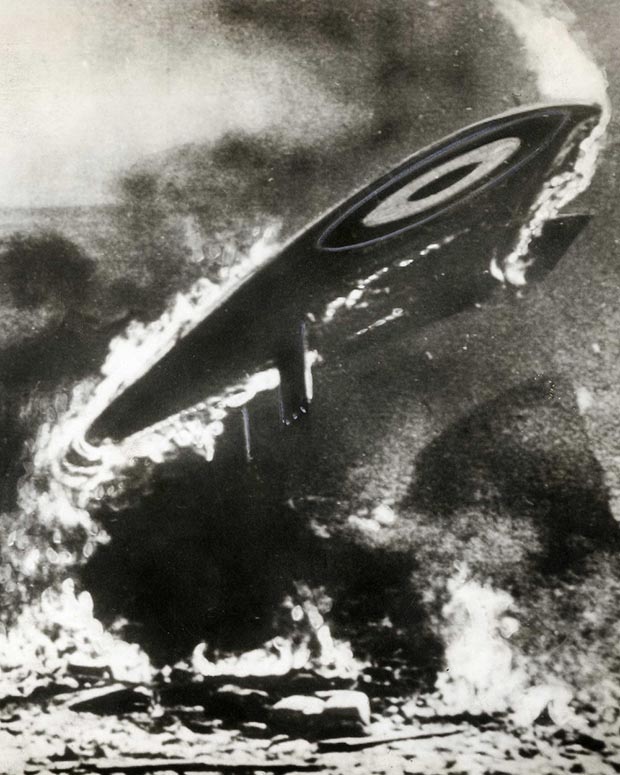 His work has been exhibited in prestigious galleries in Germany, Japan, and the US. Most recently, he partnered with Stephen Wirtz, co-founder of the Stephen Wirtz Gallery in San Francisco, to create the visually powerful book, Images in Transition, a collection of evocative wirephotos from World War 2.

The technique was still in its infancy at the time and wirephotos were far from perfect. These images were blurry, ridden with weird artifacts, and showed dot-matrix like pixelation. News agencies often retouched these pictures to enhance details, hide certain elements or incorporate new ones. This heavy amount of manipulation raises a whole universe of fascinating questions around ethics, art, and technology.

The result is an intriguing look at the intersection between art, journalism, and propaganda.

We interviewed David Pace about this thought-provoking project.

What drove you to get invested in this topic?
“I got involved in the project that would result in “Images in Transition” about five years ago. My friend Stephen Wirtz, who ran one of the best art galleries in San Francisco, showed me a selection of radio photographs he had collected over many years. The photographs, originally intended for newspaper reproduction, were of poor quality. Contrast was low, and they were sometimes bent or torn.

“Photographers were not identified. The images had usually been retouched for publication to remove artifacts of transmission or to enhance elements that were hard to decipher. The images had little or no commercial value, but they were tremendously interesting to Steve. He lamented that few people seemed to grasp their historical or aesthetic importance.

“I have tremendous respect for Steve’s ability to see beyond the surface of photographs. As we talked about the photos I began to understand his fascination. I suggested that we use them as the basis of new artwork.

“If we transformed them into something the art world could relate to, I thought, perhaps we could communicate the value of both the originals and our transformed images. We scanned a few and made them quite large. This helped, but ultimately proved unsatisfying.

“We decided to make more radical changes. Together we selected a small portion of each image—the most interesting section, in our view. We enlarged it and touched it up using Photoshop to create new pieces. The project was a total collaboration.

“Part of what drove me into this topic was the opportunity to work collaboratively with Steve Wirtz. Another thing that interested me was working with an archive of historical images and the challenge of making something new out of this archival material.” 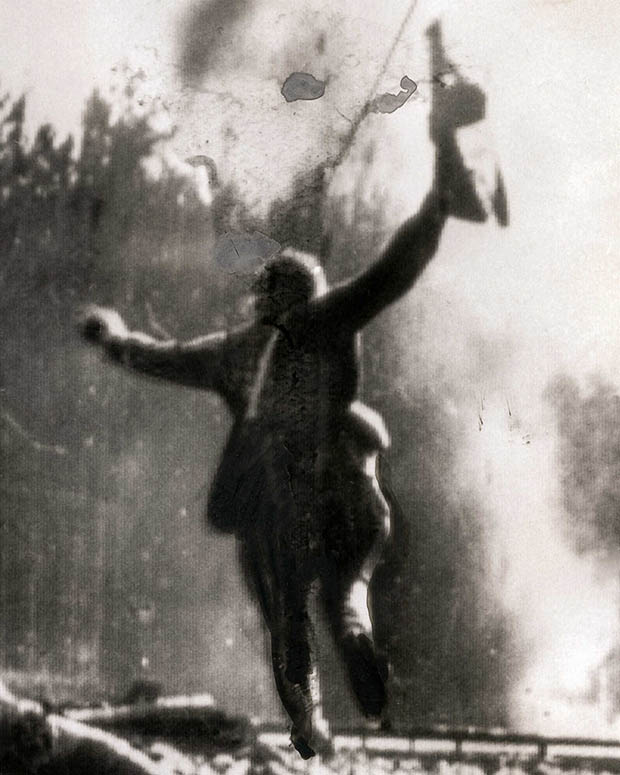 However, I hope those interested in war and history will find these images and essays thought-provoking.”

What were your criteria when editing these wirephoto photographs?
“In editing these photographs, we found that each image contained something compelling. We selected interesting prints with clear evidence of retouching, transmission artifacts, and other imperfections such as focus problems or signs of physical wear and tear.

“Our goal was to edit in a way that emphasized the retouching, the transmission artifacts, and the imperfections, in order to highlight the history of the technology used in the transmission process and to expose the human process of photo retouching.

“Our cropping was extensive. Twenty-five percent or less of each original photo was used. We were also drawn to images that showed the wear and tear of being made 75 years ago. Elements that were distracting were removed but nothing was ever added.

“Our basic philosophy was ‘anything that makes the final image better as a work of art is okay’.” 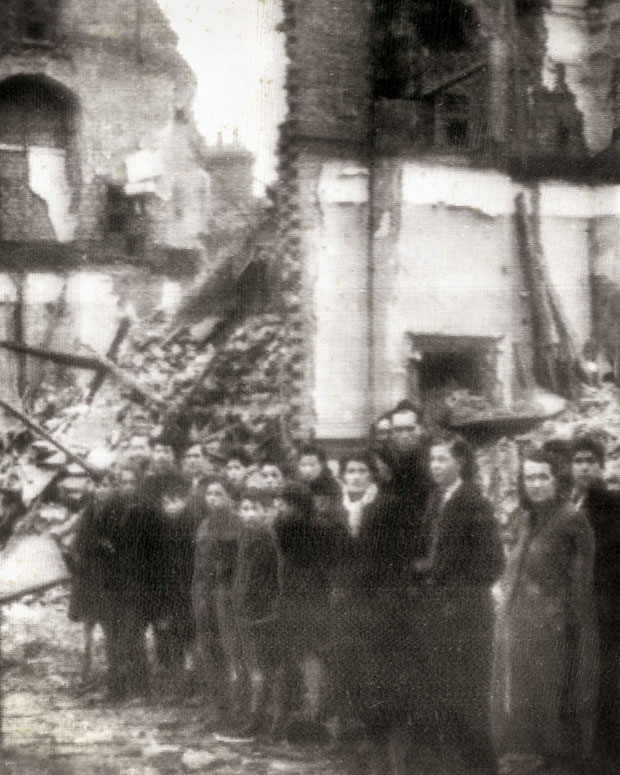 A myriad of filmmakers and theoreticians like Robert J. Flaherty, Joris Ivens, Walter Ruttmann, Dziga Vertov and Jean Luc Godard have attempted to define over the years the relationship between reality and photography/film, with some reveling in the artifice and others searching for “purity”. What is your take? Can a photograph ever be completely true to reality?
“I don’t believe a photograph can ever be absolutely or completely true to reality. Picasso is famous for saying, ‘We all know that art is not truth. Art is a lie that makes us realize truth – at least the truth that is given us to understand.’

“Every photographer has a point of view that is conveyed in a photograph. Where you stand, how you frame a subject, when you press the shutter, which negative or capture you choose, and how you manipulate the print (cropping, dodging, burning, and so on) – all these convey the intentions of the photographer, and the photographer’s shaping of reality.”

Just as wirephoto technology added an extra layer of interpretation to reality, nowadays we are witnessing the explosion of easy-to-use photo manipulation software and new inventions like DeepFakes and Virtual Reality that are blurring the lines between reality and imagination. In your view, what will happen to art and journalism in the upcoming decades? What are the ethical, political and aesthetic implications of this new revolution?
“Knowing that all reality is to some degree constructed should make us suspicious of all representation. Nonetheless, there IS something ‘out there’ that exists. Being aware of the biases of any purveyor of images is important.

“Some things are a version of the truth, others a perversion. It is necessary for all of us to be visually literate enough to tell the difference between versions and perversions of truth.” 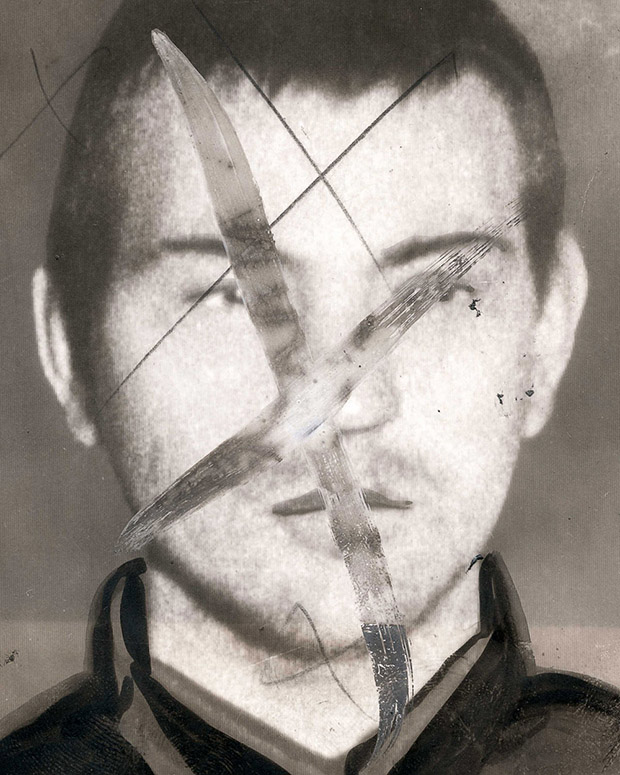 In times when the very concept of ‘truth’ and “’fact’ are being put into interpretation, and politicians all over the world are going as far as rejecting science and attempting to redefine history, what is the role of a photographer in this new “post-truth” scenario?
“I have worked in West Africa on projects that are documentary in nature. In that context, my view is that the role of the documentary photographer has not really changed in the contemporary era. It is our job to represent the world as it appears to us, and to become deeply familiar with the people and places we portray.

“I favor long-term, in-depth engagement with a community to really understand what I am seeing and what images I am creating. To specifically address your question, I want to say that transparency is important: it is crucial for documentary photographers to make their own perspectives known – to name, in other words, the narratives they are constructing.

“In my West African work, I have tried to clearly communicate my interest in portraying the realities – including the beauty and joy – of everyday life in a remote village.

“The Images in Transition project highlights a related aspect of the current ‘post truth’ scenario. Again, transparency is key: our project attempts to communicate the way that wirephotos and radiophotos were used in newspaper publication during World War II to construct particular narratives about war, courage, victory, and justice.

“In today’s “post truth” communication practices, transparency about the narratives that are being constructed through images and text is often lacking.” 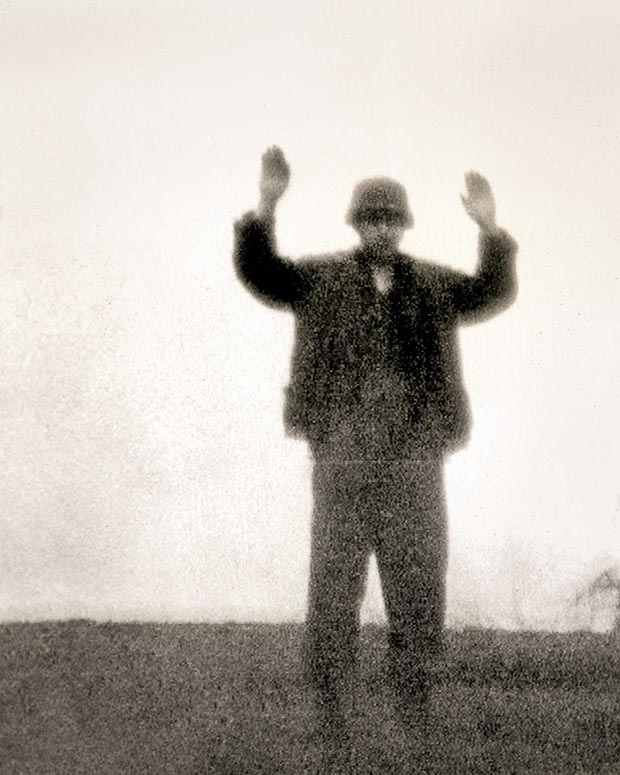 To you, what makes a ‘good’ photograph?
“A good photograph grabs my attention and makes me think. Beauty is a good place to start, but it is well to note that beautiful photographs can be made from disturbing or ugly subject matter.

“For Images in Transition we cropped original images significantly to create dynamic tension in our transformed images. Paradoxically, we emphasized elements that are normally considered not good: poor focus, visual defects, transmission artifacts.

“We found those aspects of the images both beautiful and ‘good’. They speak to the technological history of photography.”

You’ve been in the industry for many years, and have seen many technological and market shifts. What do you think about the state of photography right now? Any particular thoughts on Instagram and smartphone photography?
“The technology is amazing. Digital photography allows for greater flexibility and immediacy. But photography is much more than technology. Vision is essential. It transcends technology. Ansel Adams talked about pre-visualization, which remains important.

“Today, everyone with a cellphone is a photographer, but not everyone has a vision, an ability to pre-visualize an image, or a significant narrative to share. Consistency is critical.

“Anyone can make a single exceptional image. To make a group of photographs that work together as a series takes skill, vision and practice. Smartphones are just different tools. They can be used to great effect in certain situations. Choosing the right tools for a given project aids expression.”

What is the easiest way for the public to acquire your book?
“The book is available on Amazon Books and directly from Schilt Publishing.”

What are your working on right now? Are you currently developing any new projects?
“Yes. I am currently working on several new projects. One is called “Velocity.” It involves taking pictures from fast moving bullet trains in Japan and Germany.

“I am interested in how the camera captures what we cannot see. Another is about my relationship with my wife. I am looking through negatives, slides and digital captures that we have taken of ourselves during nearly half a century together. It is about the passage of time.

“I am also working on another project with Stephen Wirtz. We are looking at a different aspect of his collection of wirephotos, concentrating on how photographs were prepared for printing.”

Images in Transition is available now through Schilt Publishing & Gallery.