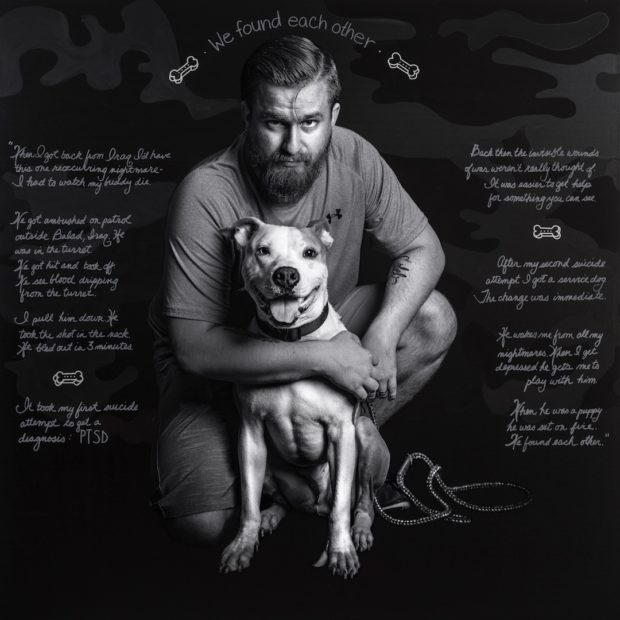 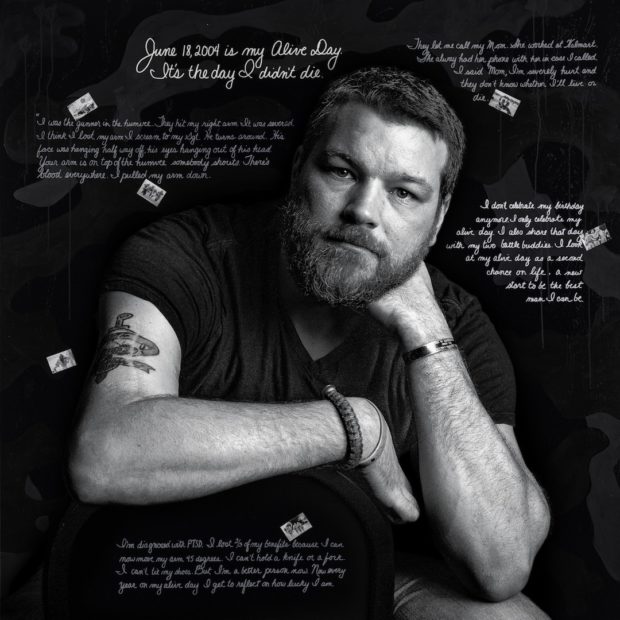 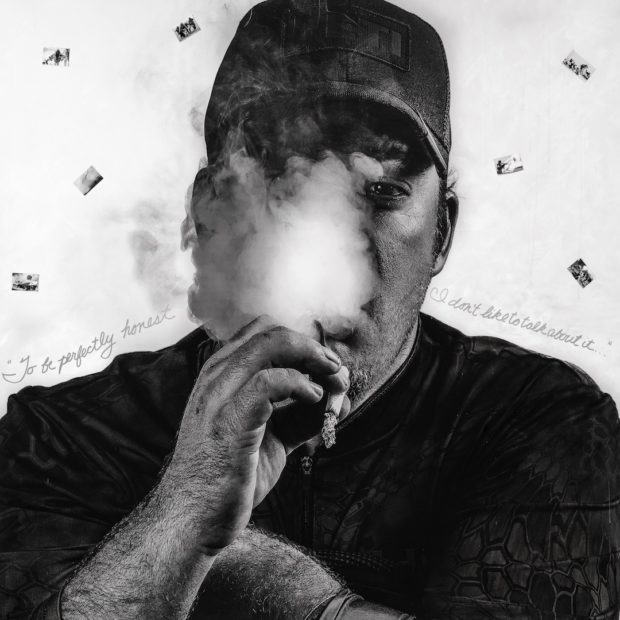 Nearly two decades into the Afghanistan War, the death toll mounts in a battle on the home front. Every day in the United States, 22 veterans commit suicide, falling victim to an invisible killer: Post Traumatic Stress Disorder (PTSD).

PTSD is a condition of persistent mental and emotional stress occurring as a result of injury or severe psychological shock, typically involving constant vivid recall of the experience, with dulled responses to the outside world. Once triggered, the mind becomes a harrowing trap where scenes of trauma replay themselves long after they occurred.

Recognizing the epidemic destroying the lives of veterans and their families, Susan J. Barron realized her duty to give them a voice in her powerful portrait series Depicting the Invisible: A Portrait Series of Veterans Suffering from PTSD, now on view at  The Army and Navy Club in Washington DC through April 15, 2019.

Here Barron shares the stories of veterans fighting against the enemy within the gates, a trauma that is sometimes amplified for women soldiers by the horrific betrayal of their male comrades who sexually assault them with impunity. 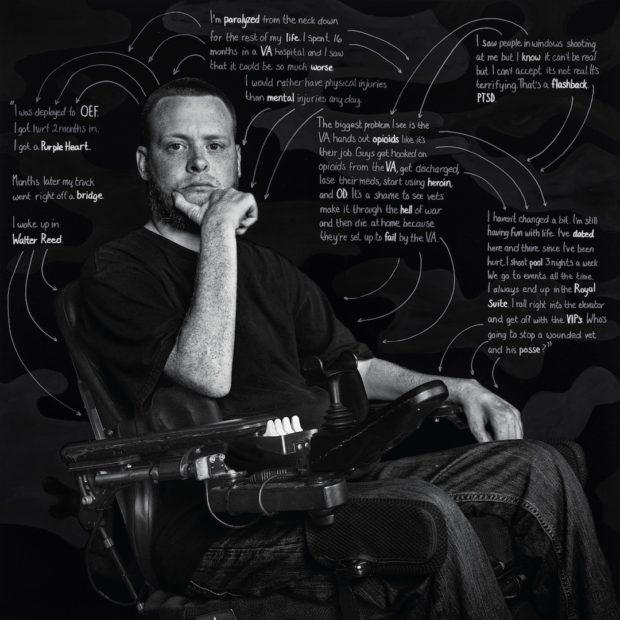 Did you have any preconceived ideas or beliefs about the nature of PTSD that your experiences on the project helped to revise, expand, or dissolve?
“I didn’t know anything about PTSD when I began this project, but this is what I have learned: PTSD hijacks your mind. The flashbacks can take you from a fourth of July fireworks show in Miami, right back to the battlefields of Afghanistan in an instant. The flashbacks are not a memory or an imagination; you actually believe you are back there in the war.

“Rusty Carter explained to me that he saw people in windows shooting down at him. He knows that probably couldn’t be happening, but he is seeing it and hearing it and smelling it and so he tries to run for cover in his wheel chair because it is so real.

“Veterans with PTSD also all suffer from periods of what has been described to me as ‘a depression so hopeless, so black, so bottomless that it feels there is no return.’ There was not one veteran diagnosed with PTSD that I met with that did not contemplate suicide at one time or another.

“Another commonality are the nightmares that make you believe that you are back in the war. When Derek Butler returned from Iraq, he had this one recurring nightmare; he had to watch his buddy die in his lap. He was afraid to go to sleep because of these night terrors. He now has a service dog that is trained to wake him up from his nightmares.

“I believe that PTSD is not a ‘disorder.’ It is a normal response to seeing and doing things that no one should ever have to see or do. The veterans in my series have told me that they prefer Post Traumatic Stress PTS or Post Traumatic Stress Injury PTSI. They do not feel it is accurate to label them with a disorder, and I agree.” 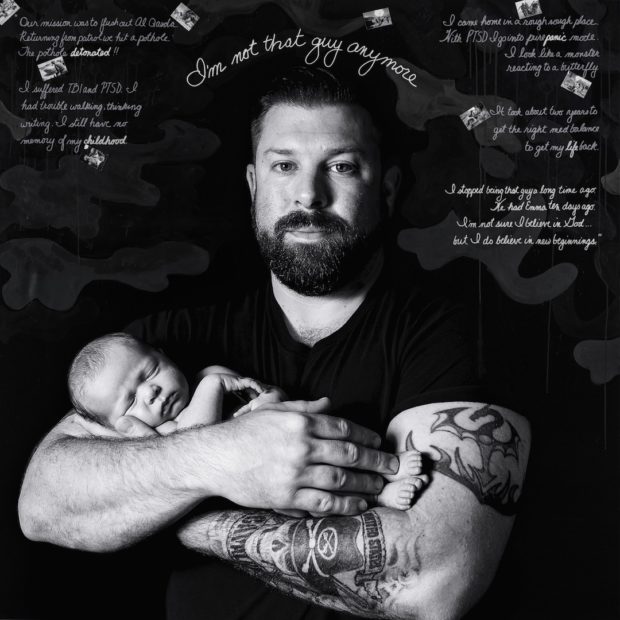 How did working on this project provide veterans with a space to mediate their experiences and their identity through story and portraiture?
“The invisible wounds of war can be just as devastating as the visible wounds, but it is difficult to get empathy or help for an injury you can’t see. The telling of these stories has fostered a greater understanding of PTSD even between the veterans and their own families.

“The wife of one veteran told me that her children learned so much about their father through his portrait, both what he experienced in the war and what he experiences in his ongoing battle with PTSD. They also saw they were not the only ones with a dad with PTSD.

“Spc Josh Sandors’ wife told me the painting was a gift for her infant daughter, because when she grew up it would explain her father. Veterans want their stories told. As Sgt Mike Burke said, ‘If we don’t talk about PTSD, we can’t save lives.’

“At the gallery, a young veteran who was diagnosed with PTSD slowly walked through the exhibit carefully reading each work. He came up to me and said, ‘These are all portraits of me.’ He said he was feeling suicidal that very morning and he heard about the gallery show on the radio and decided to come down.

“He had no idea there were so many people going through what he was going through. I introduced him to Freedom Fighters Outdoors, an amazing organization helping veterans with PTSD. The gallery owner said to me, ‘I just saw art save a life.’” 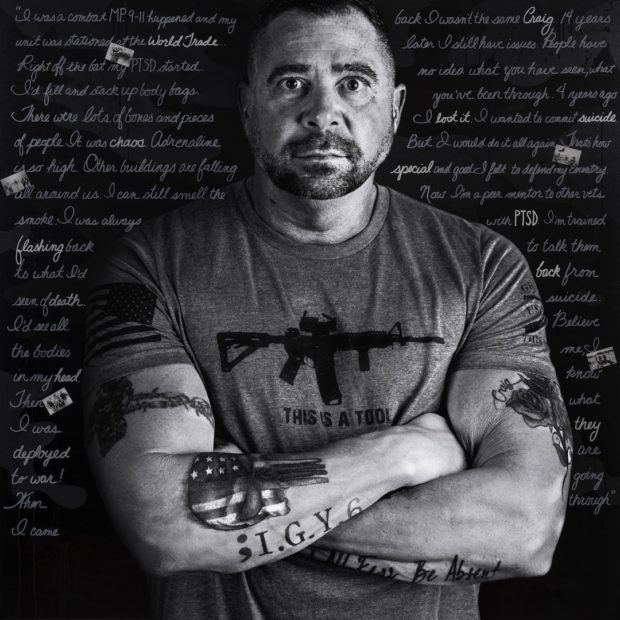 Sergeant Mike Burke said, “They tell you, ‘Don’t be the broken soldier.’ The reality is you can’t be fixed.” Could you speak about what you observed about the treatment soldiers receive for PTSD?
“As Sgt Rusty Carter told me, ‘The biggest problem I see is the VA gives out opioids like it’s their job. Guys get hooked on opioids by the VA, get discharged, lose their meds, start using heroin, and OD. It’s a shame to see vets make it through the hell of war and then die at home because they are set up to fail by the VA.’ Opioids are not the answer.

“The hardest truth that I have learned is that there is no cure for PTSD. At least not yet. Many veterans are left to find their own path to managing their PTSD, and it is a problem they will live with for the rest of their lives. The most recent addition to my portrait series is Charles ‘Chuck” Newhall lll, a Vietnam veteran who has been struggling with PTSD for over 50 years.

“Many veterans tell me that a combat veteran’s mind can be their own worst enemy, and that the trick is to keep busy. The quiet times are when your mind goes to that dark place. Have a hobby, something you love to do, and don’t stop. When Emma was born, Spc Josh Sandor told me that a baby is a beautiful distraction. When you are changing a diaper, you are not thinking about ambushes and rocket attacks.” 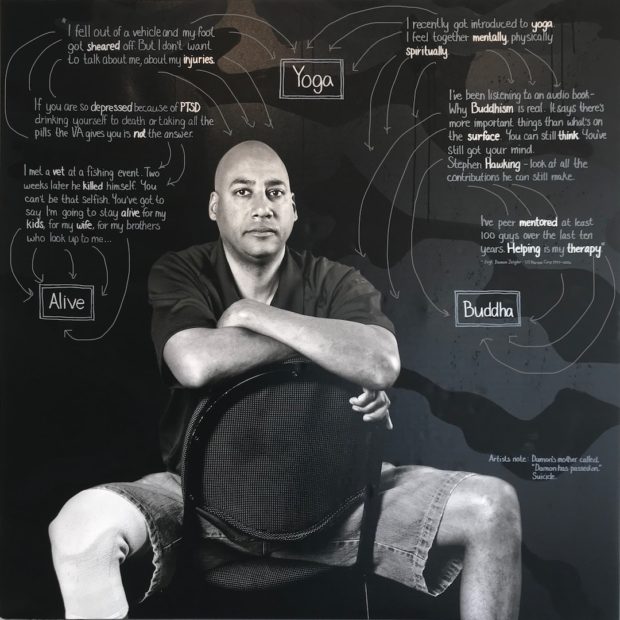 What was the most challenging aspect of work on this project?
“One of the veterans in my portrait series is Damon Zeigler. Damon walked with such grace in the face of such trauma. His right foot was sheared off in a truck accident. He said to me, ‘Look at Stephen Hawking, look at the contributions he can still make.’ He was searching for healing in such high-minded ways such as Yoga and Buddhism. He’d been a peer mentor to over 100 vets and said helping others was his therapy.

“Shortly before the opening of Depicting the Invisible at the HG Contemporary Gallery in New York City, I received a call from Damon’s mother saying that Damon had died. His suicide was the single most devastating aspect of this project for me. 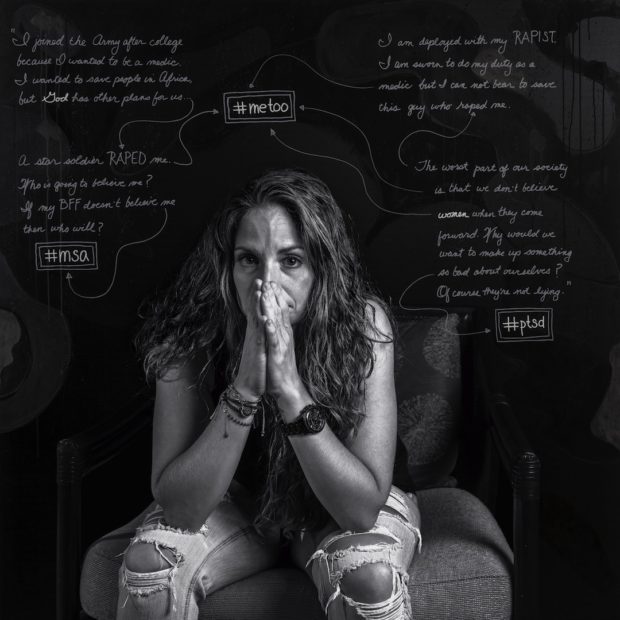 What was the most surprising aspect of working on this project?
“I was not prepared for the response I got from female veterans. Many female veterans were very forthcoming in sharing their stories with me but did not want to share them publicly. Women veterans with PTSD have different issues than men with PTSD; frankly MSA — military sexual assault.

“Sgt Rena A Trotter is the only woman in the Depicting the Invisible portrait series. She is incredibly brave to have come forward with her story of being raped by a star soldier. She said, ‘Who is going to believe me? If my best friend doesn’t believe me then who will?’

“She was then deployed with her rapist. She was sworn to do her duty as a medic but could not bear to have to save the man who raped her. She said, ‘The worst thing about our society is that people don’t believe women when they come forward. Why would we make up something so bad about ourselves?’ Of course they’re not lying.

“Rena’s story is the intersection of military sexual assault and the #metoo movement. Many women veterans told me their similar stories, but the stigma of being a rape victim is so powerful in the military that these women would not go public with their stories.

“These women also suffer the same PTSD from being in combat that men do, but then they have this extra layer of sexual trauma. It is a lot to carry with you. Many told me I was the first person they ever told about their rape. Their husbands don’t know, their mothers don’t know. Rena wants her portrait to inspire other women to come forward.” 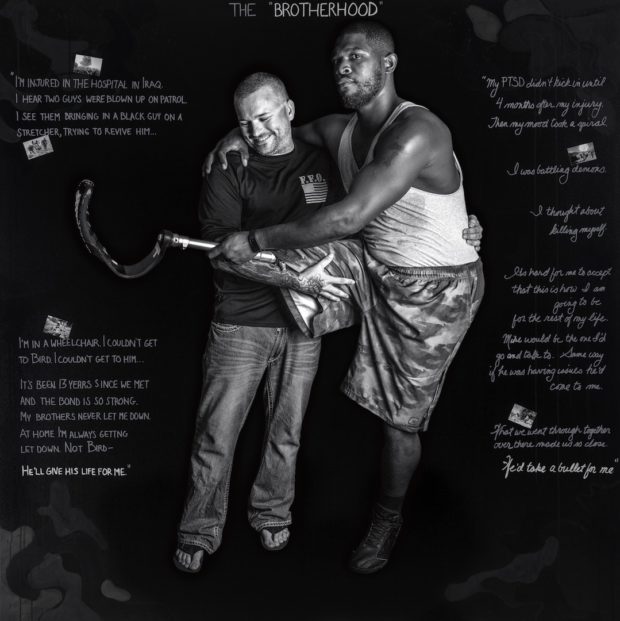 What would you like the public at large to understand about the nature of PTSD through this work?
“I believe that art has the potential to affect social change. Ultimately these works are about making a human connection. I hope this work inspires empathy and understanding around the difficult issues of PTSD and inspires people to step up and make a difference.

“I am so grateful to the veterans who so graciously trusted me with their stories. I wanted to find a way to use these stories to give back. An art book of the portrait series has been published. All the proceeds of the first edition of Depicting The Invisible: A Portrait Series Of Veterans Suffering from PTSD went to Freedom Fighters Outdoors, an amazing organization helping veterans with PTSD.” 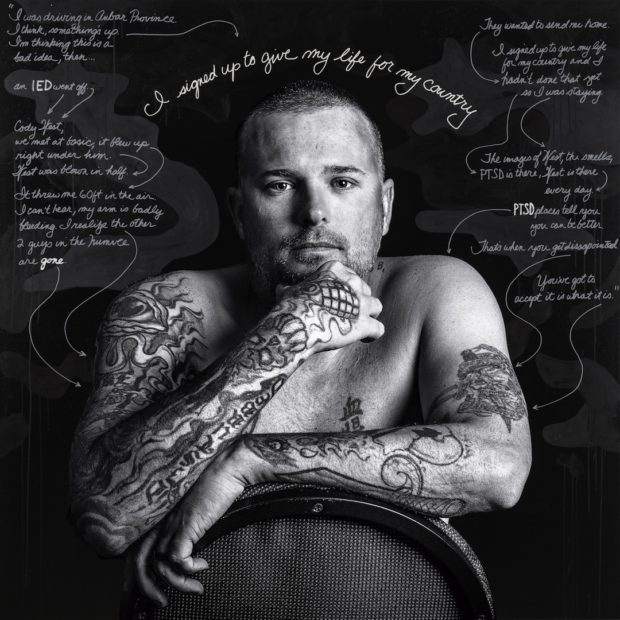 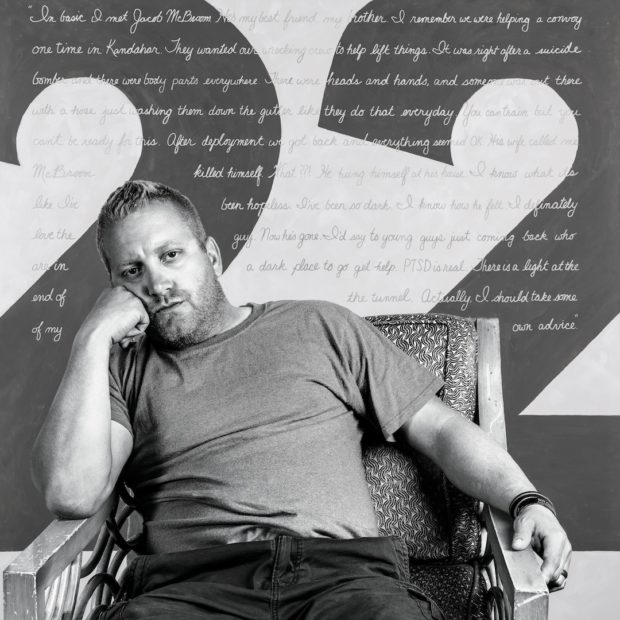 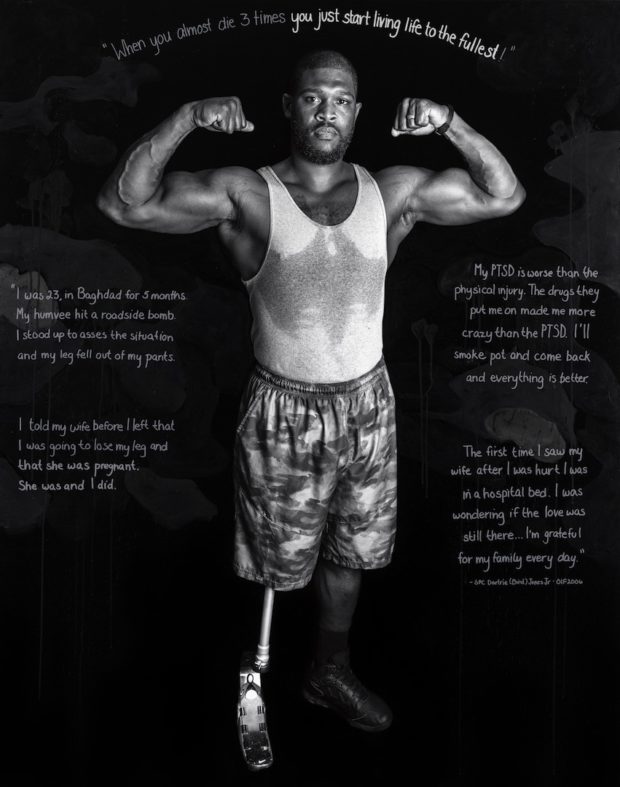 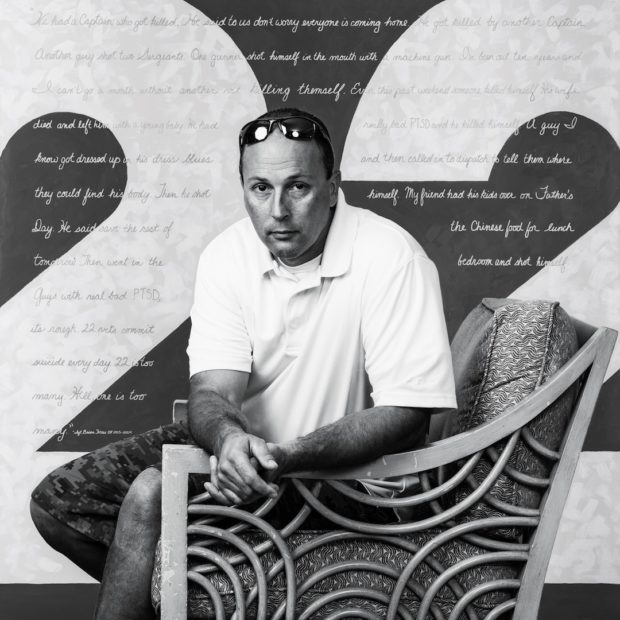 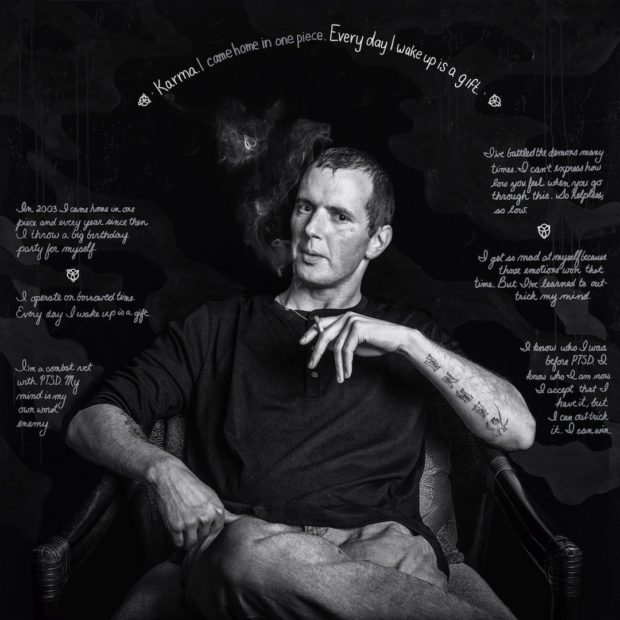