The Magical World of Puppetry, in Photos 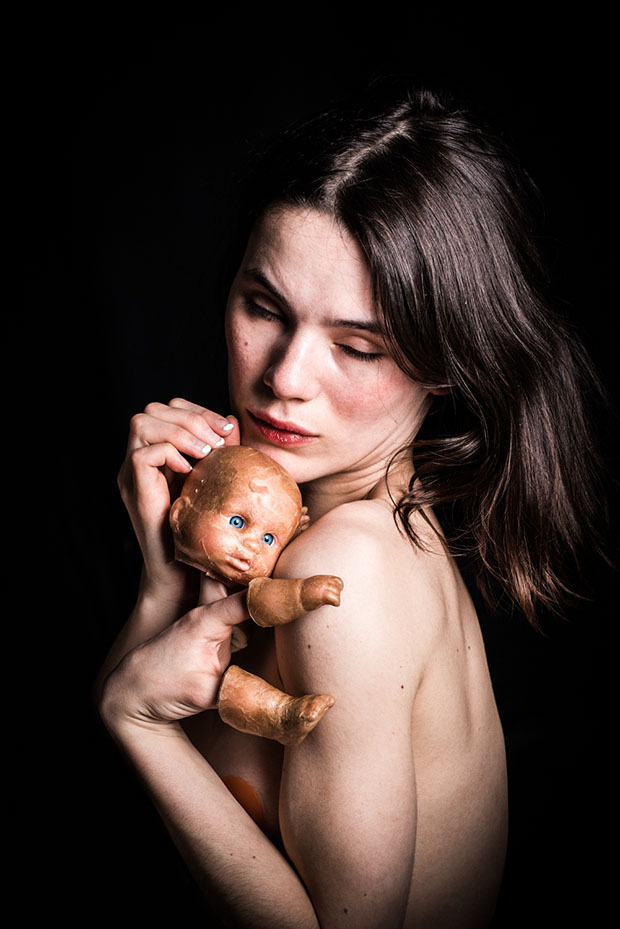 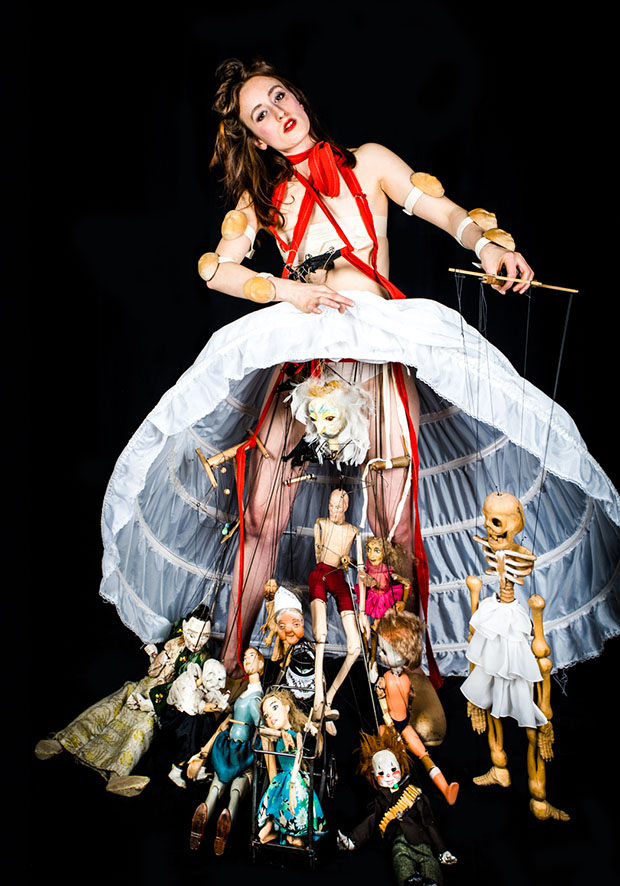 The connection between a puppeteer and a puppet runs deep, and the Berlin-based photographer Benita Suchodrev has captured this mysterious relationship up-close. Her project Puppet Masters features students from the Academy of Dramatic Arts Ernst Busch, each accompanied by their own make-believe characters. Some might reign over a menagerie of beasts, and others have a single lonesome companion, but they all emerge from a background of pitch black.

For Suchodrev, puppets are never simple inanimate objects. At their best, they become a physical manifestation of something unknowable, bringing the shadowy parts of ourselves into the light of day. In German, word “puppet” and “doll” is the same: Puppe. And like the dolls we keep as children, puppets are precious. Though they might be made of wood, paper mache, metal, or string, they can be made to breathe, walk, jump, or kiss. Like mirror reflections, they reveal bits and pieces of our psyche; sometimes they as innocent as newborns, and sometimes they turn monstrous.

Suchodrev values trust highly, and she spent a great deal of time with her subjects. As a result, her photographs reveal a rare vulnerability, and at times, the puppeteers seem to surrender completely to the fantasy. The master governs the puppet, but maybe the puppet, by some strange and unknowable sorcery, has its own kind of hold over its master. “Perhaps one of the most memorable moments from the project was when one of the female puppeteers told me how jealous she feels every time she sees other puppeteers touch or work with what used to be ‘her puppet,’ a puppet she worked with closely in the past,” Suchodrev says. “I then understood the extent of the attachment or ‘bond’ that is formed between the puppeteer and his/her puppet.”

We asked her to tell us more about the series, and you can see more images on her website. 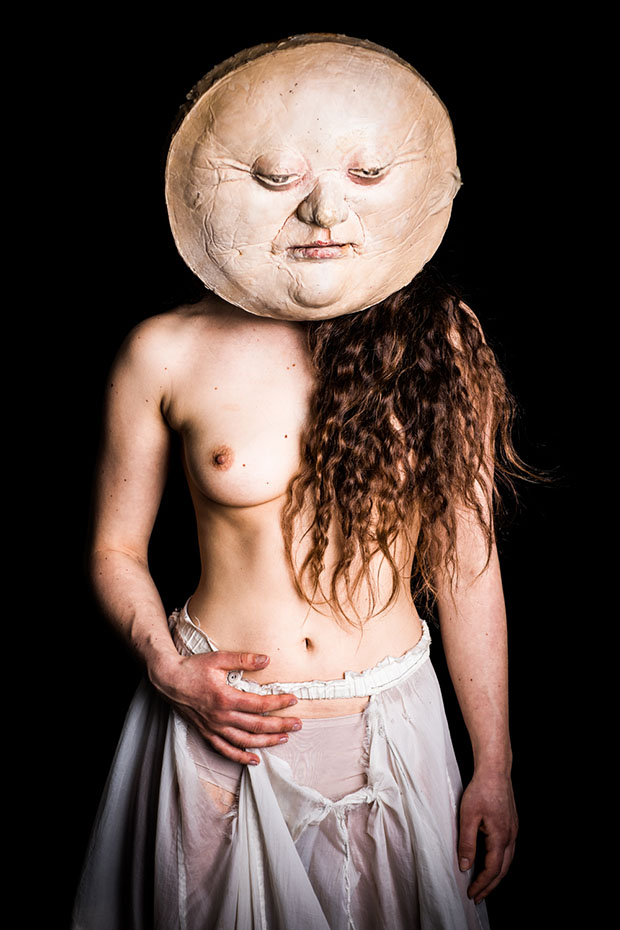 What are some of your earliest or most prescient memories of puppets?
“I was born in the former Soviet Union and the first puppets I learned of were created by Sergey Obraztsov, whose craftsmanship, wit and fine sentiment I find to be moving and timeless. As an only child, I had a lot of personal space for creativity and experimentation. I worked a lot with my hands, my voice, and my imagination.

“I’ve always felt very attracted to theater and costumes, to notions of personal identity, to drama and narrative, and already as a child I used to create and stage performances. I selected the actors out of the pool of neighborhood kids. In this context, my first hand-made puppets were born. We integrated them into our shows.” 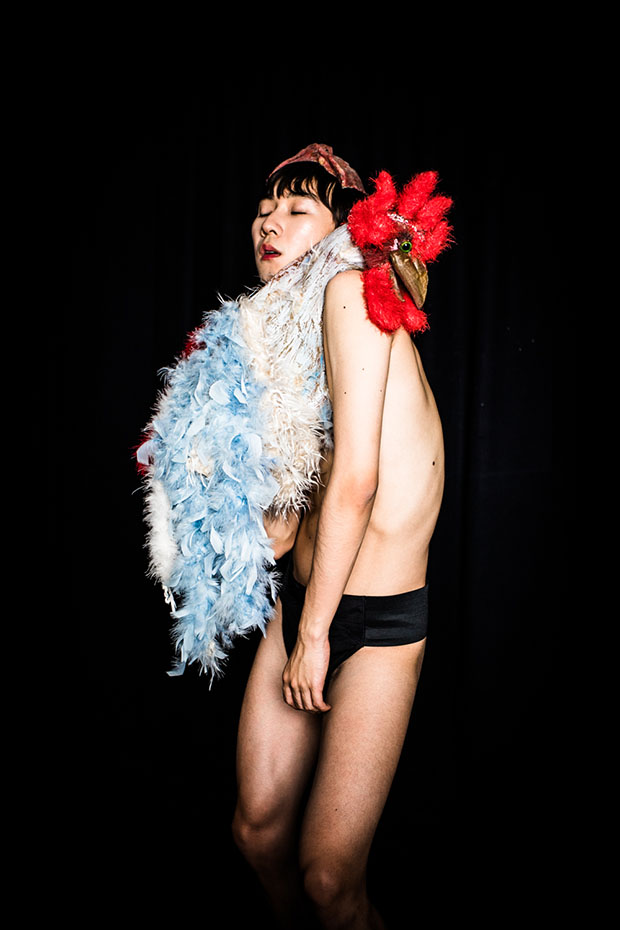 How did you choose the puppeteers included in the series?
“The selection process consisted of two parts. First I selected the puppeteers based on the black and white ‘mugshots’ that were on file for each student at the academy. As a people and portrait photographer, I am pretty good at reading faces and can often get a good sense of a person just by looking at a snapshot.

“I wasn’t looking for ‘beauty,’ not in the popular sense of the word. It was as much about the details of the face as it was about the story it tells or could potentially. With some faces, you can tell many stories, and with others you can’t, but sometimes one story can be more than enough. I select my models the same way I photograph–very intuitively. For this project, I was clearly looking for certain expressivity but also variety.

“In the second part of the selection process, I conducted individual interviews with the selected puppeteers. The interview consisted of about 50 questions related to their person and to their studies. I wanted to get to know them ‘live,’ to get an idea of how they move, how they speak, and how they relate to themselves and to their chosen field of study. After all, a puppeteer is not the most common or profitable profession one can select in this day and age. It was important for me to understand their motivation, the degree to which they feel they relate to this type of work, their favorite roles, puppets, objects, their individual means of expression on stage and off.” 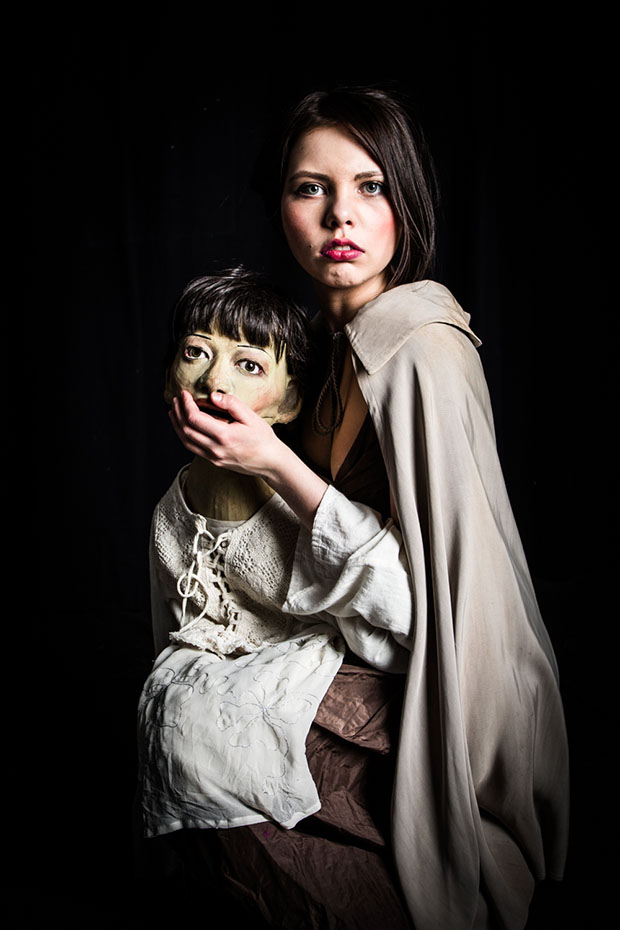 How long did each shoot last, and what was the atmosphere like on set?
“The shooting lasted anywhere from 3-5 hours each, and not unlike the puppeteers, who slipped in and out of different roles, I also juggled a few hats, acting as the photographer, stylist, make-up artist and set designer, so it wasn’t always easy to keep things from getting a little hectic.

“There were lots of costumes to try on for look and size, puppets and final props to select from (although most were already pre-selected by me). We were also using very heavy fleece-like cloth to drape the entire studio, and it would attract every tiny thread and particle like a magnet, which didn’t make things easier when the flash went off. At the end, the studio looked a bit like a war zone.” 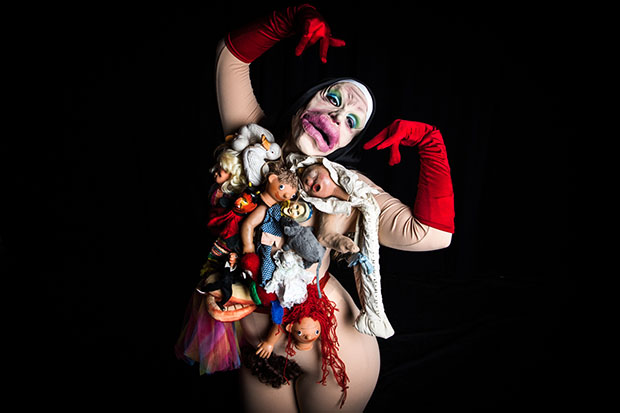 Did you select the puppets and props, or did the puppet masters?
“With the exception of a couple of puppets that were handmade by the students or otherwise had a personal meaning to them, all the puppets, costumes and props were individually sought out and selected by me. I scoured through the contents of three storage rooms (for costumes, puppets and props) located in two separate theater complexes in different parts of the city. I wanted to photograph each model in various roles, alternating costumes and props.

“I’ll never forget the preparation, which was quite a rehearsal for the ‘grand show.’ Setting aside the ‘stage design’ and the handmade last minute ‘constructions,’ I remember filling cartons upon cartons with a plethora of items, some as light as a feather boa and others as heavy as a metal barrel (large enough to fit a man inside), then loading them all into my car and transporting them several times to the other side of town where the studio was set up.

“In the puppetry department of the historic theater building, I’d plunge into another storage room and hand-pick anything from gas masks to Beethoven’s stone bust to dozens of marionettes, which were made of solid wood and hand-crafted, pretty heavy and fragile at the same time. I carried them on a metal bar up the seemingly endless staircase leading to the 700 square feet space that was packed with everything, including my studio equipment.

“I remember the team members of the puppetry department looking at me in bafflement, as I passed them in the halls with my puppet ‘entourage’ in tow: ‘Why do you need so many?’ But when they saw the photographs, all questions were answered. 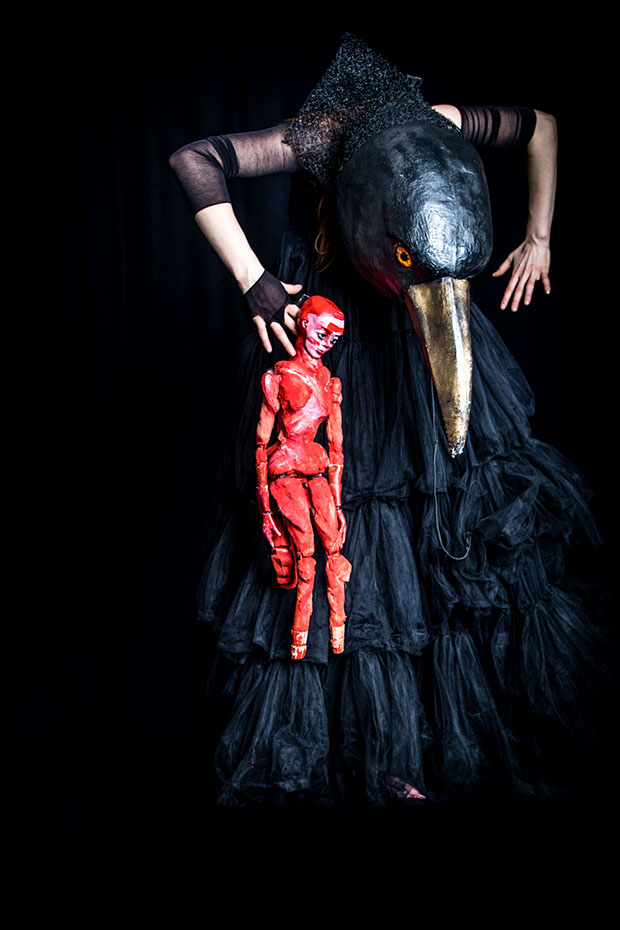 What makes puppetry timeless, in your view?
“When an actor uses his or her body not as the main ‘work instrument’ but uses this body to work ‘through’ the body of a puppet, to project his or her physical and emotional energy into this external lifeless ‘other,’ he/she is not concerned with place and time.

“I could elaborate on how life and death, among other things, are embodied by the Puppet and its master and how all such things are timeless, and could illustrate with a few examples why ‘man is but a puppet on a string.’ But then we would enter a long philosophical discussion.

“The art of Puppetry is as abstract as it is concrete, as mysterious as it is apparent. It invites contemplation, helps the viewer transcend his own ‘earthly’ persona and temporarily visit another less ‘real’ and more meditative realm. The road to this unreal place is paved with ‘real’ means, with objects, voices, and movement, but puppetry also functions on a subliminal level. It stimulates the imagination, challenges reality and almost always surprises.

“It captivates with its archaic simplicity and innocence, things that we are far removed from today. Perhaps this is why the art of puppetry is better understood by children whose minds are not yet restrained by the chains of ‘sense’ and ‘reality.’” 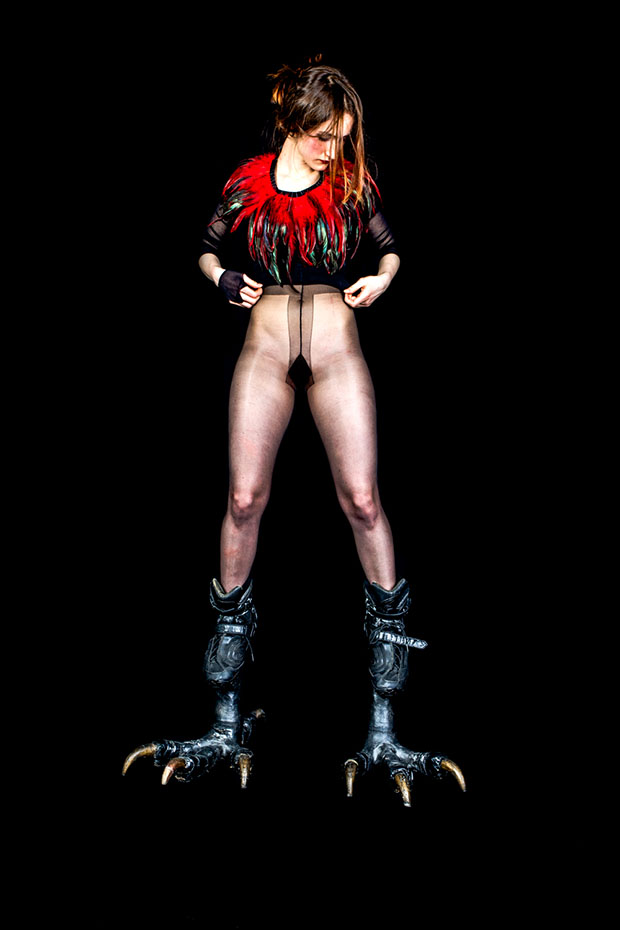 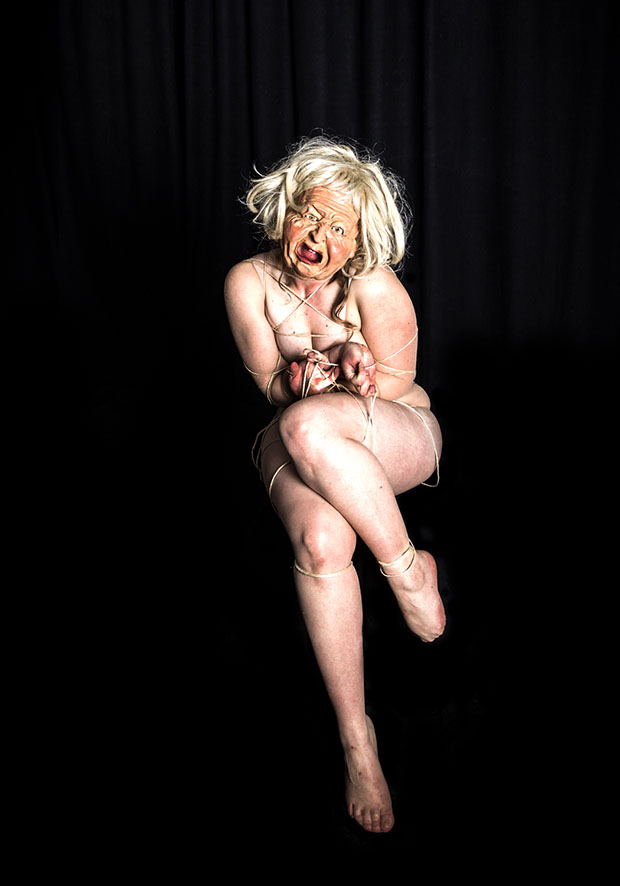 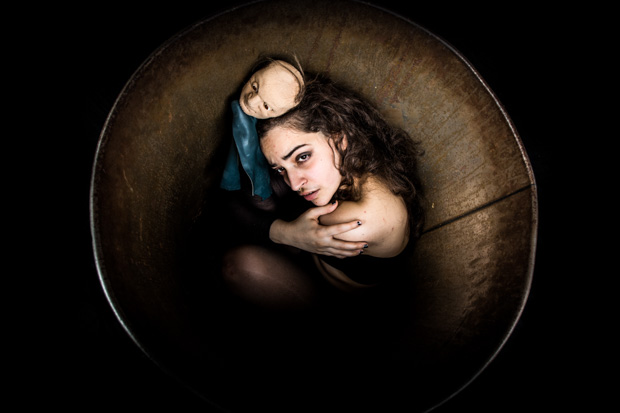