The Resilience of a Wounded Marine Captured in Photos 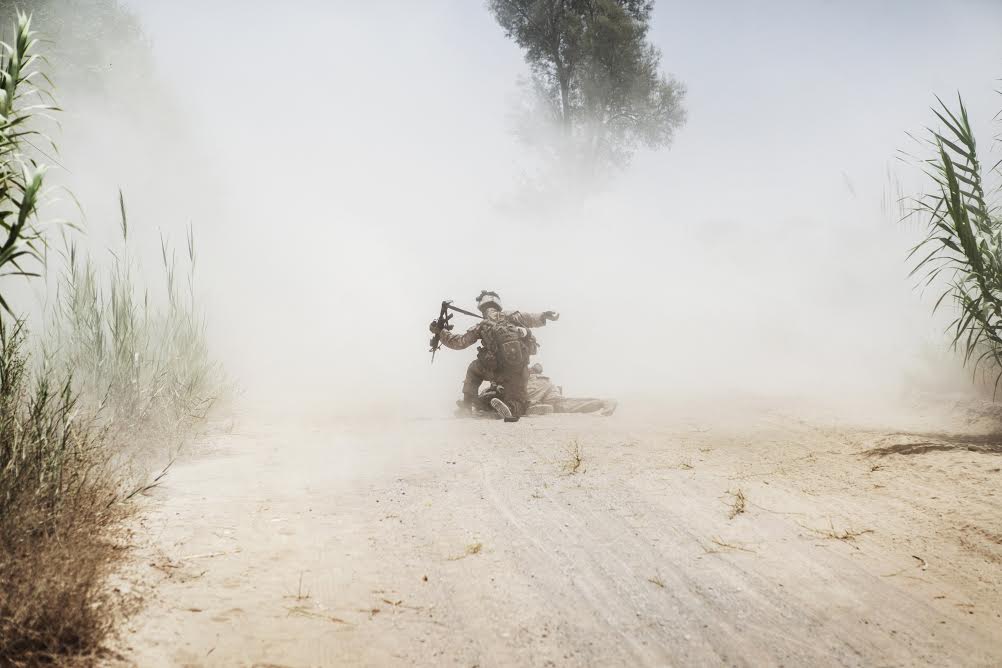 Seconds after an IED buried in the road hit Cpl. Manuel Jimenez, Cpl. Eric Hopp rushes in to help. The unit had engaged in a firefight against the Taliban earlier that same day © Victor J. Blue

A few pictures later, at 11:27:41, team leader Cpl. Eric Hopp has a tourniquet on Cpl. Manuel Jimenez’s arm. Only about 1 minute and 35 seconds, from blast to stopping the bleed. I remember the force of the explosion and how it made my shoulders seize and then I couldn’t hear. How I looked back and forth, trying to figure out where it came from until I realized it was right behind me. I remember I wheeled around and saw a curtain of white and I felt Corporal Hopp running past me. I pushed the button and squeezed off a couple of pictures, but the camera wouldn’t focus. It felt like someone slowly turned up the volume in my head, and then I could hear Jimenez screaming. I ran into the white dust until I saw him on the ground, writhing, and Corporal Hopp above him, saving him.

The war in Afghanistan took Cpl. Manuel Jimenez’s left arm. But in the eight years since we shared that terrible day, he’s made it clear that an arm is all he let it take from him.

The mechanics of embedded photojournalism mean that you end up closer to some guys, both physically and otherwise. You go out on patrol, you walk kind of spread out, someone is assigned to watch out for you in case there is contact. You end up making a lot of pictures of the guys in front of and behind you. I arrived at a small firebase in Marjah, in southern Afghanistan’s Helmand Province, at the end of July 2010. I had spent time in the field with a few different military units, but never met a group of soldiers or Marines as capable as First Platoon, Fox Company, 2-6 Marines. I went out with Jimenez’s fire team on a handful of patrols my first few days and he was usually just behind me.

As we turned for home that afternoon, I was walking about 25 feet in front of him, keeping good dispersion. An improvised explosive device buried in the road exploded right as Manny walked by it. It blew apart his arm, filled him with shrapnel and almost severed his carotid artery. Corporal Hopp and other Marines wrapped what was left of his arm and carried him over a canal. They shielded him from the dust and rocks when the medevac came. They loaded him onto the helicopter, watched it carry him away and went on with their deployment. They were back on patrol the next day.

I photographed through the summer in Afghanistan, got back to the United States, and drove out to Bethesda, Maryland. Manny was at the Walter Reed National Military Medical Center, where he was recovering from another of his innumerable surgeries. Over the next few months, I returned a few times to see his recovery at the Military Advanced Training Center, or MATC, the rehab unit. Manny worked out there with his fellow amputees. The MATC was like a big gym with what looked at first glance like incomplete men, all of them missing one, two, sometimes four limbs.

Their wives or mothers, sometimes both, sat with them, looking confused and tired. I had never seen so much painful, quiet resolve in one place in my life. Manny and the other guys pushed themselves, sweated and winced through the hurt and frustration. They tried out new prostheses, they balanced on parallel bars, caught balls and lifted weights. They were like self-assembling puzzles, trying to rebuild new versions of themselves with some of their pieces missing. Every time I left that place I felt physically aware of my own limitations and unsure of my own grit.

After the Marine Corps, after Walter Reed, Manny spent time volunteering in New York after Hurricane Sandy in 2012, then stayed for a while in Florida with his cousins, before he settled back into his life in Connecticut.

A fortuitous introduction at a race connected him with Hope for the Warriors and Purple Heart Warriors—nonprofits providing mortgage assistance and custom-built houses for wounded veterans—and they got him his own place in the town of Glastonbury. He completed his B.A. in business, and started work as an analyst at a Fortune 500 company. He has reached past the blast, the disappointment of having to leave the Corps, and the loss of his arm.

Read the rest of Victor J. Blue’s article and see more of his photographs over at Smithsonian Magazine. 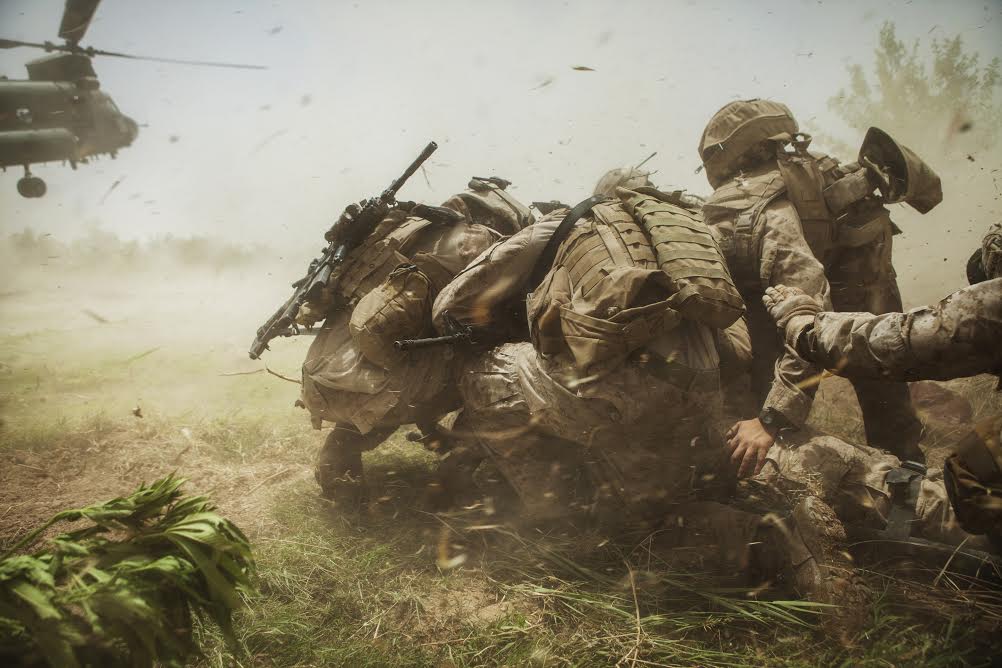 Team members shield Jimenez from debris as the medevac lands. Fifty percent of injuries and deaths to U.S. troops in Afghanistan are from IEDs. © Victor J. Blue 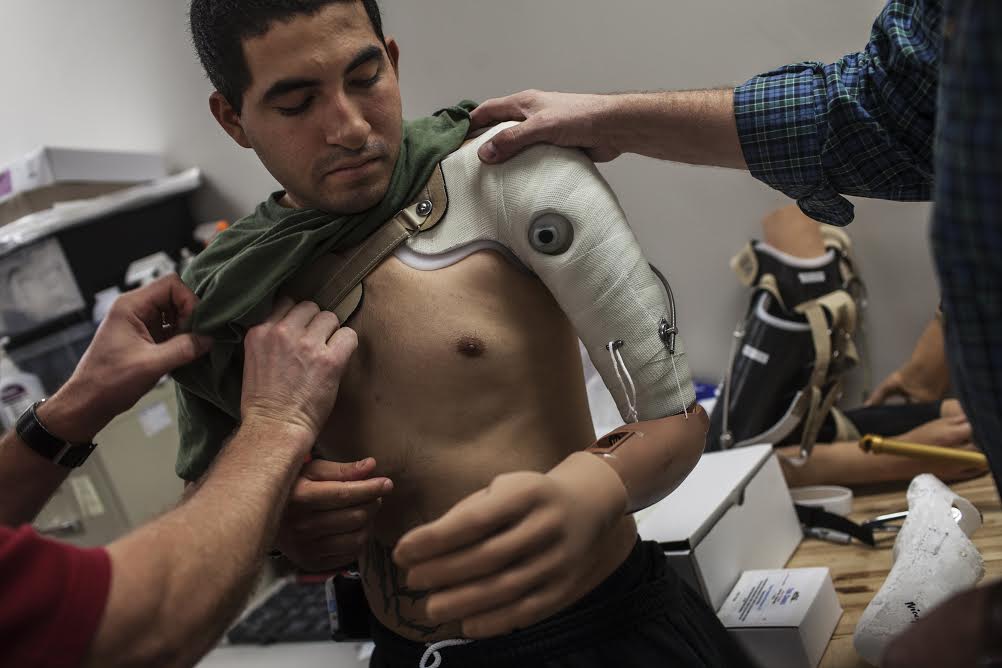 At Walter Reed in 2010, Jimenez is fitted for one of his first prosthetic arms. His amputation is so high up that it makes using a prosthesis difficult © Victor J. Blue