The Destruction of the American Landscape, in Photos 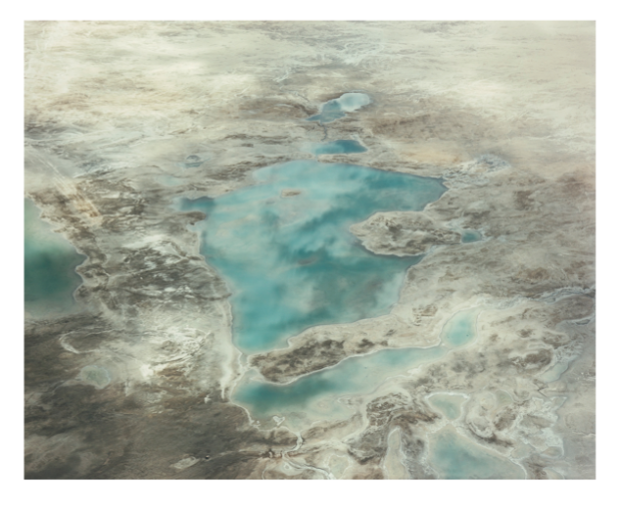 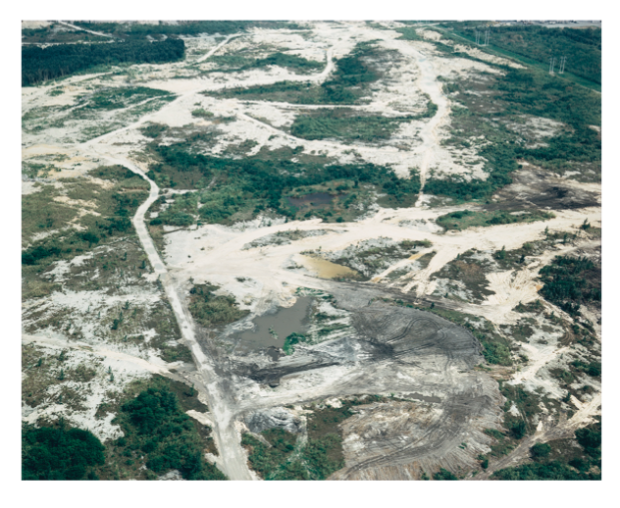 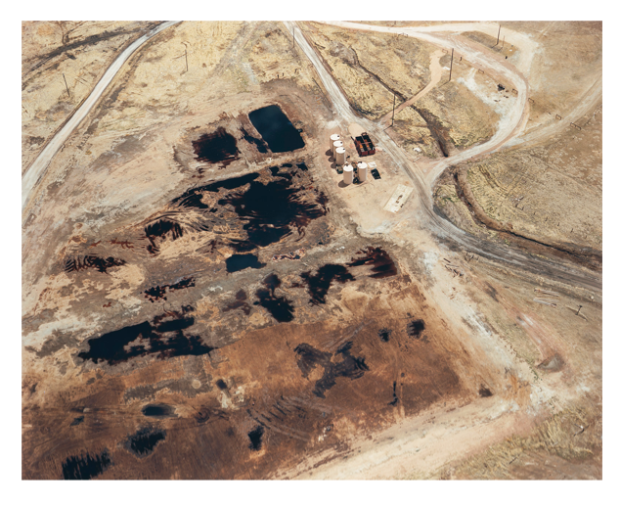 “Do not be deceived, God is not mocked; for whatever a man sows, that he will also reap,” the Bible warns in Galatians 6:7. But in 2018, we must recognize it is the Earth whose destructive powers will soon be unleashed through the horrific destruction we have enacted.

“Out of sight, out of mind,” is the old refrain, as though ignorance could ever be bliss when it’s really just failure to avert a catastrophe. That is why David T. Hanson’s aerial photographs, just published in Waste Land (Taverner Press) are a break through. The truth cannot be denied.

In 1980, the U.S. Environmental Projection Agency created “Superfund” to address the catastrophic problem of toxic waste sites.  From a list of more than 400,000 contaminated sites throughout the country, the EPA identified 400 highly hazardous locations in dire shape, wreaking ecological disaster on a poisoned landscape.

With the support of a Guggenheim Fellowship in 1985, Hanson made these photographs, which he presents in the book using a triptych structure. The book provides a U.S. Geological Survey topographic map that he modified to indicate the site within its surrounding environment, his aerial photograph, and a contemporaneous U.S. Environmental Protection Agency site description that details the history of the site, its hazards, and the remedial action taken.

The texts illustrate the bureaucratic nature of hazardous waste regulation and reveal some of the elaborate legal strategies that corporations and individuals have used to avoid responsibility for the contamination and the cleanup. Suffice to say the passage of time has seen no progress made.

Waste Land is part of Hanson’s quest to document the destruction of the American landscape, revealing the dystopian horror that underlies the naïve faith of Alexis de Tocqueville’s belief in the “triumphant march of civilization” that fuels the delusional mythology of the United States.

Waste Land is a haunting meditation on a ravaged landscape. Although the pictures were made in the 1980s, they seem even more relevant today, given our growing concerns about energy production, environmental degradation, and climate change. Here Hanson shares his experiences and insights, reminding us that the power of photography to reveal that which is hidden from view, exposing what are lies and what is truth. 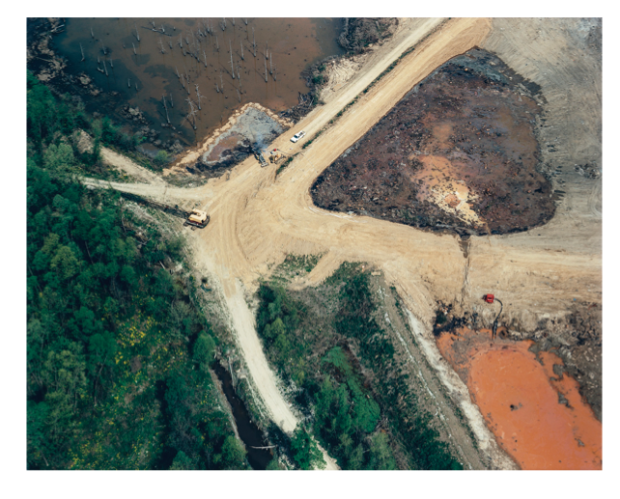 Can you speak about your choice to use aerial photography to document these sites?

“I quickly realized how much more visible and dramatic the destruction was from an airplane. From a highway one couldn’t see industrial waste ponds, hidden from public view, leaking in to local streams and rivers. From a country road one couldn’t know that a dirt road in the woods led to a midnight dumping site where companies were illegally dumping toxic waste in a backwoods bayou. Seeing the extent of our environmental destruction, day after day, was a very disturbing experience for me. I felt like I was working in a war zone, which in fact I was.

“As the sociologist Andrew Ross wrote of my Waste Land series: ‘In the PR heyday of corporate greenwashing and the greening of the military, camouflaging the truth about ecological ruin can take many forms. But the most damning evidence cannot be hidden from the intrepid aerial photographer. Hanson’s Waste Land series is a stunning documentary of a century of organized state terrorism against the North American land, its species, and its peoples.’

“As a result of the catastrophic environmental devastation that I witnessed and photographed, I became increasingly concerned about and involved in trying to create more public awareness of these issues and working to help generate environmental legislation to deal with the problems.” 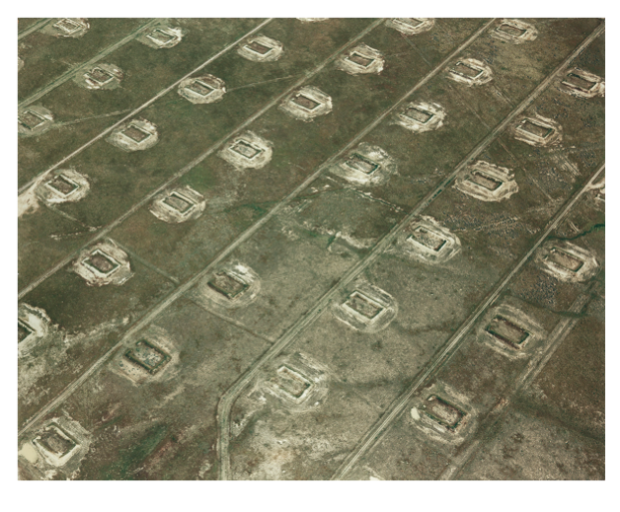 Can you tell us how you’ve used this body of work to promote environmental reform?

“In 1997, when Aperture had just published my monograph Waste Land: Meditations on a Ravaged Landscape, I worked with the Natural Resources Defense Council and the Mineral Policy Center on a coordinated campaign in Washington, D.C. for progressive environmental legislation. We gave a copy of my book to every member of Congress, and we held over fifty individual meetings with key senators and congressmen.

“Later that year, I worked with the Montana Environmental Information Center and the Mineral Policy Center on legislation to ban cyanide heap-leach mining in Montana. Copies of my book were sent to legislators and public policy-makers, and my photographs of the Pegasus Gold Mine in Zortman, Montana were used to help educate the public about the dangers of this highly wasteful and poisonous mining process.

“In November 1998, Montana voters overwhelmingly passed #I-137, banning cyanide process open-pit gold and silver mining. Montana remains the only state in the United States to prohibit cyanide heap-leach mining. The directors of the Montana Environmental Information Center and the Mineral Policy Center told me that the use of my book and photographs played a significant role in the passage of the bill.” 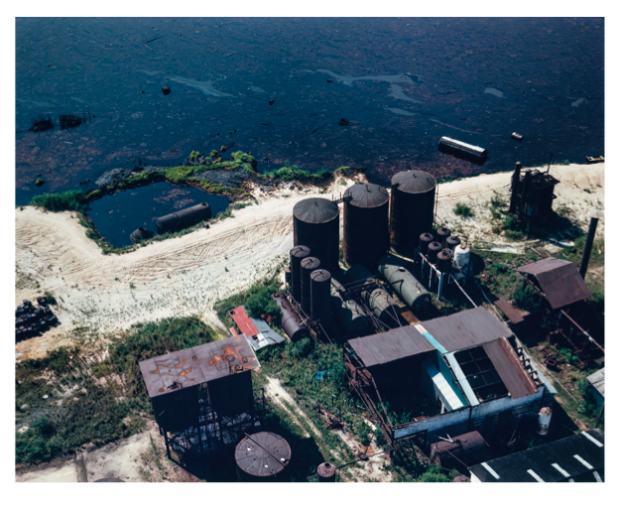 Have you been back to any of these Superfund sites, and have conditions improved or deteriorated since they were photographed?

“I have not returned to any of the Superfund sites that I photographed in 1985-86 on my Guggenheim Fellowship. Of the 67 sites that I photographed, very few have been removed from the Superfund list—most of these either for technical reasons or because the sites were small and the contamination relatively simple to address. In fact, since 1980, only a small percentage of the total number of sites have been removed from Superfund, while most remain essentially unchanged, pending litigation, funding or environmental studies regarding feasible solutions. In reality none of these places will ever be fully reclaimed or returned to their original condition.

“Their ‘cleanup’ merely amounts to emergency removal, stabilization, and long-term containment. Often the ‘cleanup’ entails writing off the primary ecological problems as either insoluble or too expensive to consider. Many sites present problems for which there are no known solutions; others will require years of complex remedial investigations and feasibility studies. A substantial number of sites for which solutions have been determined remain virtually untouched, awaiting the allocation of necessary cleanup funds. Many of the individuals and companies responsible for the contamination have used bankruptcy laws or a variety of other legal maneuvers to avoid paying for the cleanup, thus shifting the financial burden to the American taxpayer.

“Like the ancient megaliths of Stonehenge and the lines of Nazca, these sites may be seen as monuments to the dominant myths and obsessions of our culture. Indeed, it seems likely that the most enduring monuments America will leave for future generations will be the hazardous remains of our industry and technology. The temples of the Aztec and Mayan civilizations have survived a mere 500–2,000 years; Native American Anasazi cave dwellings and pictographs date back only 1,000–2,500 years. How much longer lasting—and how tragic in consequence—will be the contemporary wasteland that has been created in the United States during the past 150 years? To cite just one example, the radioactive contamination from American plutonium factories will remain deadly for more than 250,000 years—that is 10,000 generations, far longer than homo sapiens has been in existence.” 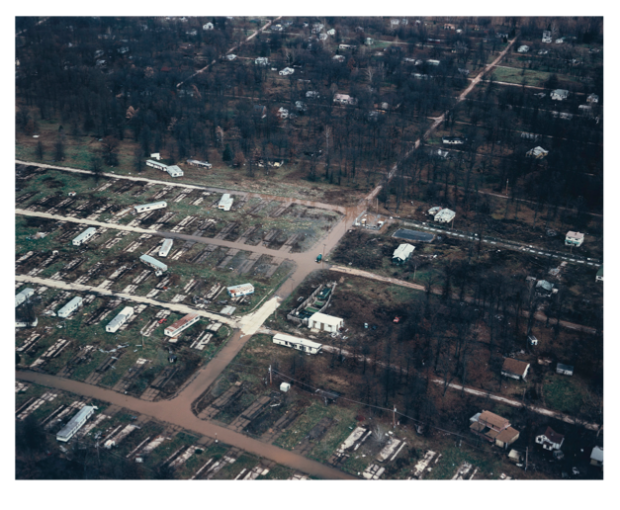 What did you discover making this body of work?

“As I was creating these photographs, I saw them as monuments for the end of the twentieth century. In examining how dramatically the American landscape has been transformed in the past 150 years, they began to reveal the new landscape that we have created and now inhabit. The images are a testament to how much our landscape has changed and how much has been lost. Perhaps we could say that the long tradition of the romantic, fetishized and phallocentric landscape reaches its inevitable endpoint in these damaged and poisoned industrial sites. Displaying the dystopian side of progress, they form an extended investigation into nature and culture, the real and ideal, order and entropy. Landscapes of failed desire, these sites become both arena and metaphor for the most constructive and destructive aspects of the American spirit. These works become, finally, meditations on a ravaged landscape.” 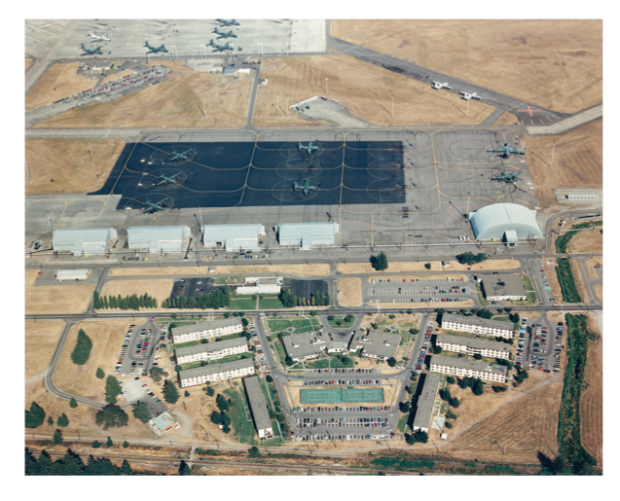 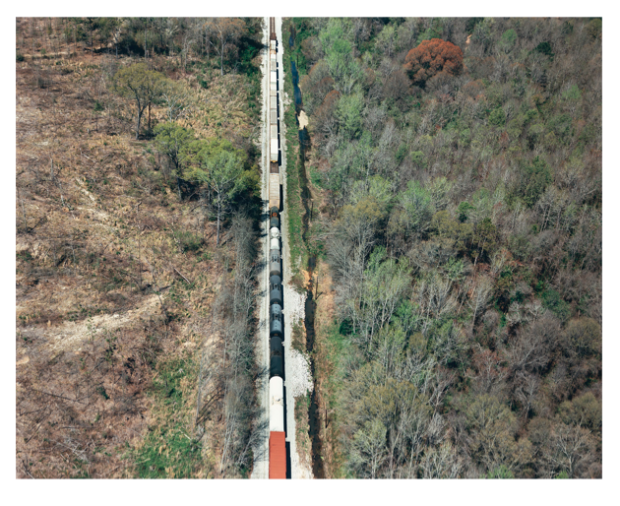 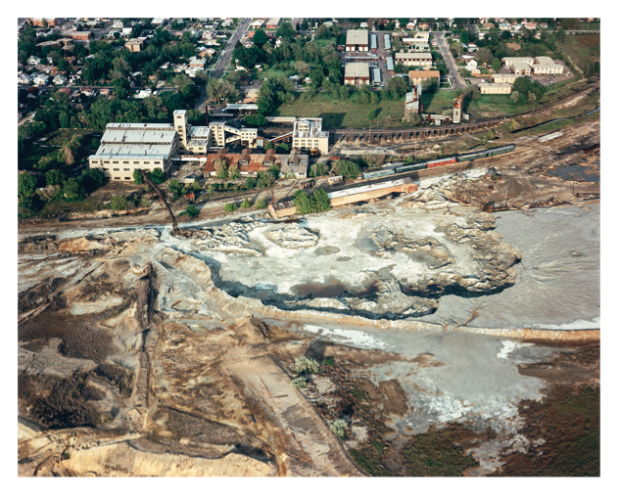