The Loss and Longing of Elderly Women in a Siberian Village 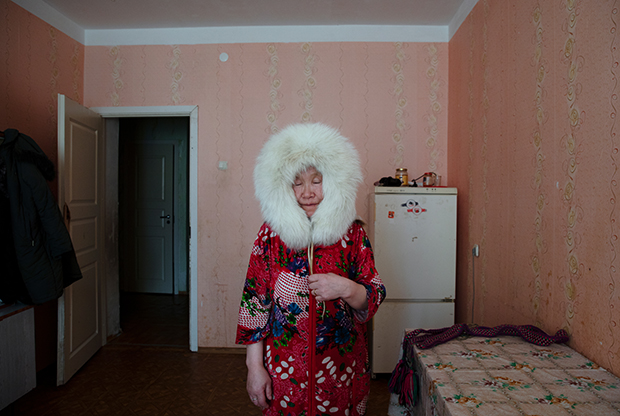 Pudani Audi (born.1948). Pudani was born in the tundra and roamed since birth. In this portrait, she is wearing a fur hat, the sole object she was left with from her wandering days. Pudani Audi: “I feel that my part is over. That I am no longer needed” 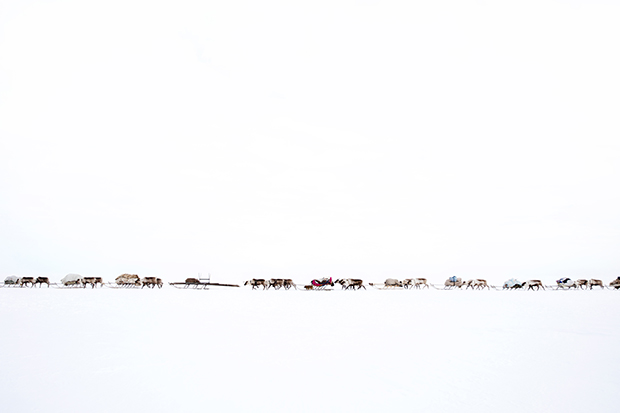 A convoy of reindeer, belonging to the Serotetto (white reindeer) family, during their migration over the frozen river of Ob.

In order to visit Yar-Sale, a secluded village deep in Northern Siberia, the photographer Oded Wagenstein spent days traveling: a plane to Moscow, followed by a sixty-hour train journey, and finally, a seven-hour drive to traverse a frozen river. “The first few days were extremely difficult,” he tells me. “On my first night in the tundra, I slept in the tent of an eighty-year-old herder. The tent was filled with smoke from the stove, and the temperature outside was minus 25. Did I already mention that I am asthmatic?” In the end, though, it was all worth it to meet a group of elderly Nenets women who call this unforgiving landscape their home.

The Nenets are nomadic reindeer herders. “While men are usually encouraged to remain within the migrating community and maintain their social roles, the women often face the struggles of old age alone,” Wagenstein says. He has devoted several bodies of work to the subject of aging around the world, and some of the communities he’s documented are, in a sense, “forgotten” or left behind. When titling this body of work, he chose Like Last Year’s Snow, a Yiddish phrase for “something which is not relevant anymore.”

“I believe that there could be something intimidating about the camera,” Wagenstein continues. “Especially in a closed community like this one. So first, you must build trust.” With help from his fixer (local guide), he explained to the women that he was a photographer who had come to listen to their stories. During initial visits, he did not bring his camera out, and even when he did, he set it on the table and refrained from taking photos immediately. “The camera is my excuse, just an instrument, to make connections,” the photographer admits. “Therefore, in my work, the photo-making takes only a fraction of the time I spend with the people I photograph. I want to hear their stories and maybe share some of my own too.”

In Yar-Sale, the days are safer and easier than they are in the tundra, but they’re also quiet. “Nomadic life is harshly difficult,” the photographer says. “Still, most of the women I met want to go back. To leave the comfortable life of the village and live in the tundra. Why? Because probably loneliness and seclusion are worse than anything else.”

Despite the isolation of the area and the infrequency of visitors—or perhaps because of these things—Wagenstein was met with open doors. “I have never received a warm welcome like the one I received in that remote village,” the photographer admits. He sat with the women and heard them sing old lullabies, tell tales, and share memories.

“With every woman, there were tea and cookies, and sweets and fruits,” he tells me. “At first, I felt uncomfortable. From the looks of their homes, you can understand that they do not have that much, and I did not want to be a burden, but my guide insisted that I eat and drink by telling me, ‘This is their chance to host someone, so drink that tea, even if it is the fifth time today!’ This is a lesson I took with me.”

Wagenstein asked each woman to select an item from her past, and they wear these objects in his photographs. He also spent time with the larger nomadic community, where he saw the stories he’d been told come to life before his eyes. He’s paired the portraits with Siberian landscapes to illustrate the memories—and dreams—of his subjects. He even met and traveled alongside the extended family members of one of the elderly women he met in the village, though he only put the pieces together later, after examining his diary.

Sadly, the women of Yar-Sale rarely get to see their beloved reindeer, animals who are considered to be part of the family. But they fill their houses with images of reindeer, and the creatures populate many of the songs Wagenstein heard during his time in the village. “One of the things common to all the women I met was their longing for nature and specifically the snow,” the photographer adds. “Not in the metrological sense, but emotional. Snow symbolizes the long wandering journeys with family and friends.”

“On this journey, I heard so many sad stories,” he continues. “About losses and longings that could not be realized. I experienced extreme weather and felt very lonely.” But the full emotional weight of what he’d seen and heard only hit him when he got home. Months after their visit, the photographer spoke on the phone to one of the women, Liliya. She had difficulty hearing over the phone and asked him to come to her house again. When replied to say he was over 2500 miles from Yar-Sale, she responded, “It doesn’t matter! Come and visit again, and I can make us some tea.” He tells me, “It broke my heart.” 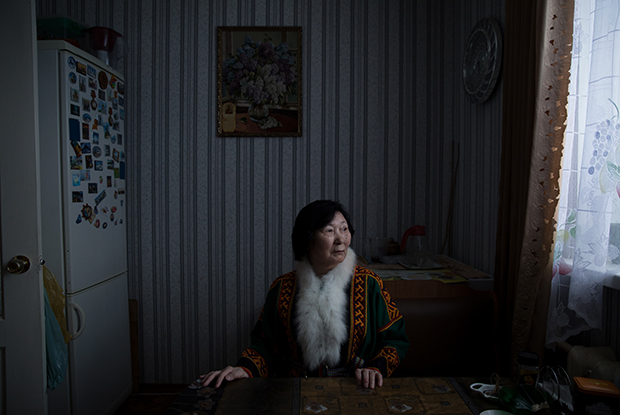 Liliya Yamkina (Born. 1944). As a teenager, she was the only one in her clan who knew how to read. She said she still remembers how important she felt when she read everyone their letters and formal documents. However, the importance of her reading skills to the clan was also the reason that her father prevents her from going to college to become a teacher. Now in her apartment, she writes love songs about the Tundra and her dream is to publish them in a magazine. Liliya Yamkina: “I did not fully understand the importance of tradition and family when I was young. I argued so much with my parents. I wanted to escape from my roots. I remember how much I liked when they told me folk tales around the bonfire…I miss them so much.” 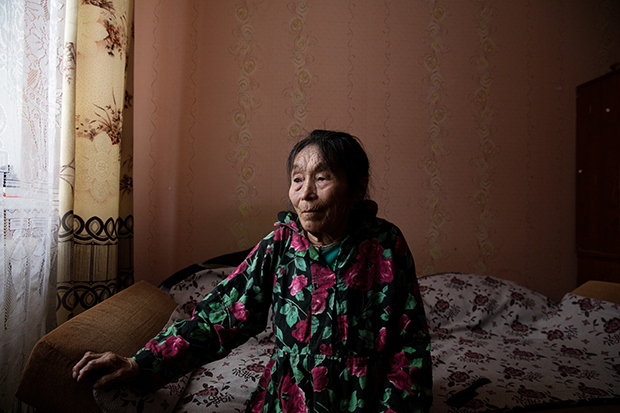 Autipana Audi (born.1941). Autipana experienced many sad losses. She lost her husband, son, and daughter to diseases, and a few years ago, her entire reindeer herd perished to starvation during a cold wave. Almost unable to walk, she spends her days mostly limited to her bed. Autipana Audi: “I miss summers when we used to fish. I miss my family and the reindeer, but the thing I miss the most is walking. Walking in the snow.“ 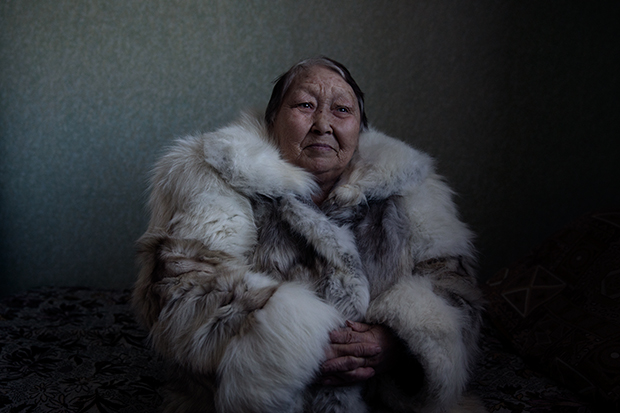 Angelina Serotetto (Born.1942). Angelina was part of a family of shaman women, and her mother taught her to read the future using sacred objects from nature. Angelina Serotetto: “I view everything with a loving eye. I think you learn it as you get older.” 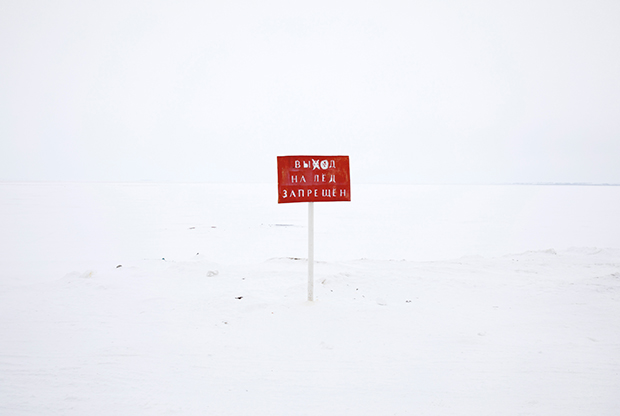 An official sign warning the local villagers that “going out to the ice is prohibited,” meaning that from this point on, tundra begins. 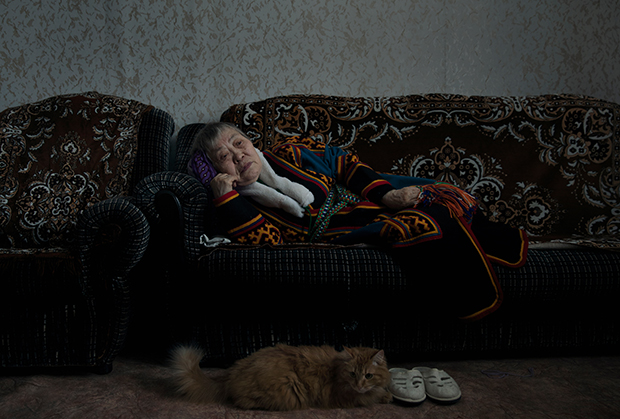 Zinaida Evay (Born.1946) and her cat Persik (“peach” in Russian). Zinaida was married for many years, and she shared with me that she had a beautiful and loving bond with her husband, right to his last day. Now, after he passed away, she is living in the small apartment alone, with their mutual cats. Zinaida Evay: “All that is left are the lullabies I sing to myself.” 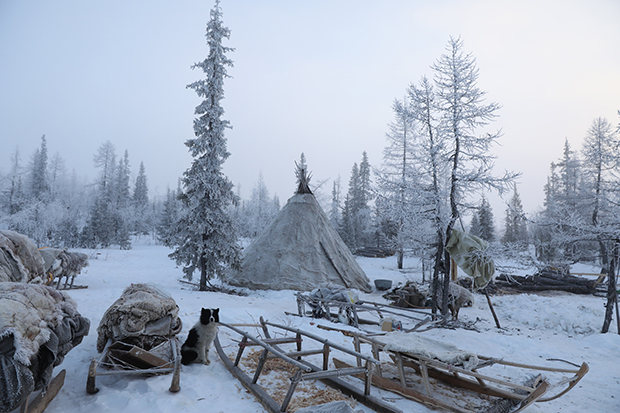 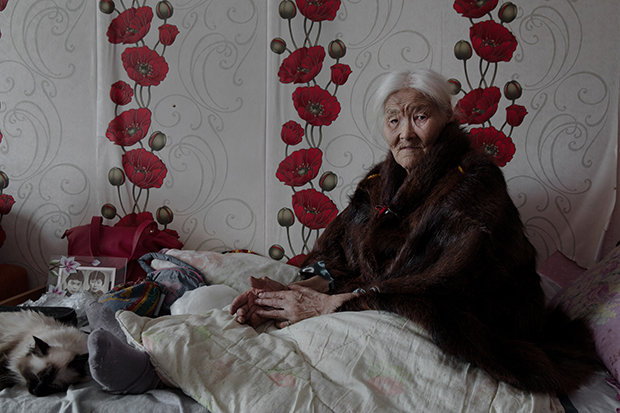 Necla Audi (Born. 1928). Although Necla was 89 when this portrait was taken, she declared that she insists on returning to live with the migrating community. At the far left of her bed, a picture of her two sons, taken when they were young. Now, both of them are herders in the tundra. Necla Audi: “I was born in the tundra and spent all my life there, it’s the only way of living I know.” 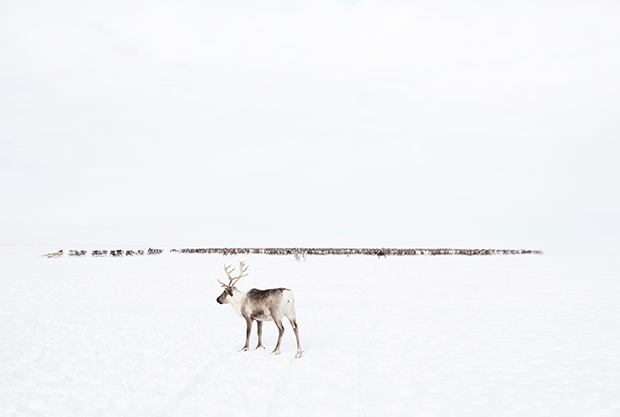 A lone deer, separated from his herd. Without the herd’s protection, the deer is likely to die.

All images and captions © Oded Wagenstein