The Humanity Of Wildlife, In 150 Photos 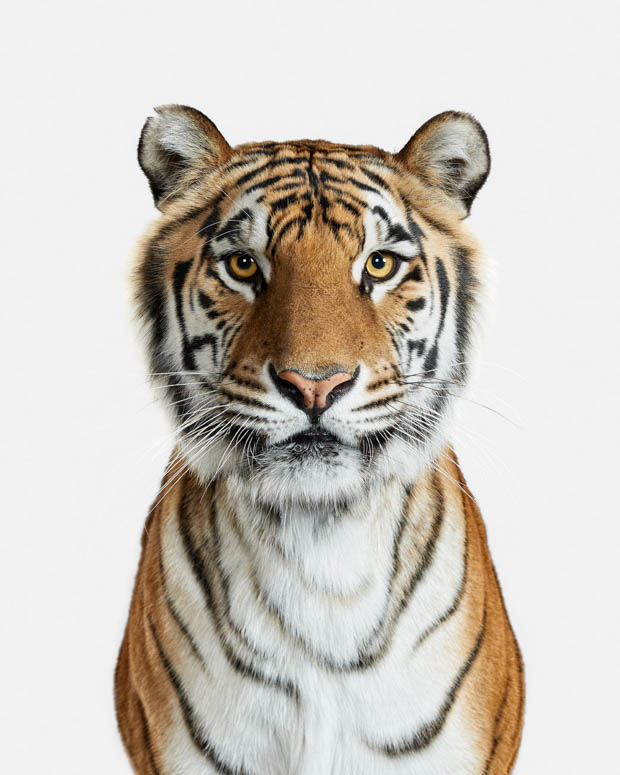 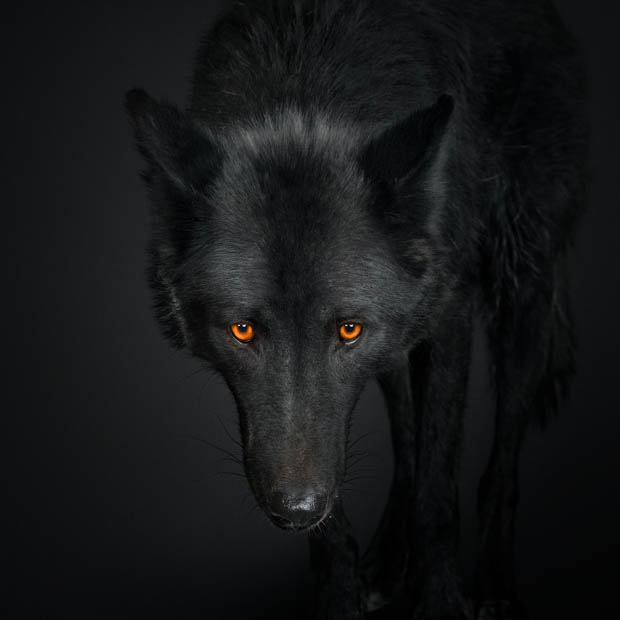 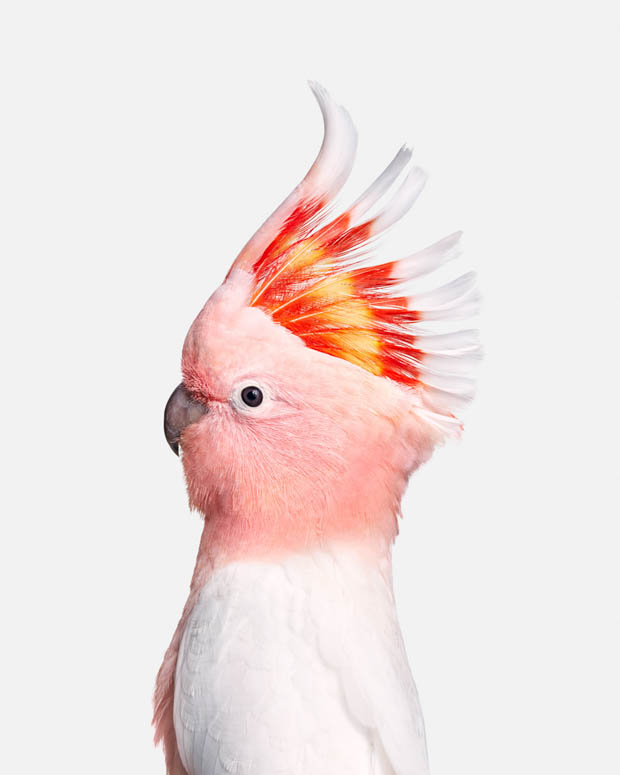 In 2017, Randal Ford’s animal photographs were awarded first place and best of show in the fine art category in the International Photo Awards competition. Nearly a year later, Rizzoli New York published his first monograph, The Animal Kingdom: A Collection Of Portraits. Over five years in the making, the book features 150 up close and personal animal portraits, from a pensive chimpanzee to a fierce spotted leopard. Proceeds from the sale of this book benefit Project Survival’s Cat Haven, a park dedicated to the preservation of wild cats.

“The book is my perspective and portrayal of the animal kingdom. As a portrait photographer, my intention is for these animal portraits to speak to you. What they say depends on the conscious and subconscious feelings you embody,” Ford writes in his artist’s statement.

One of the most interesting facets of the book is Ford’s decision to photograph these animals in a studio environment. Although wild animals are most often seen in their natural habitat, Ford strips away context and elevates form through lighting and composition. He makes it easy to develop cathartic connections with these animals on a deep human level; he channels emotion without ever being able to communicate his intent to his subjects.

We spoke with Ford to learn more about what it’s like working in the studio with wild animals, the differences between photographing animal and human subjects, and what animal portraiture can teach us about our own psyches. 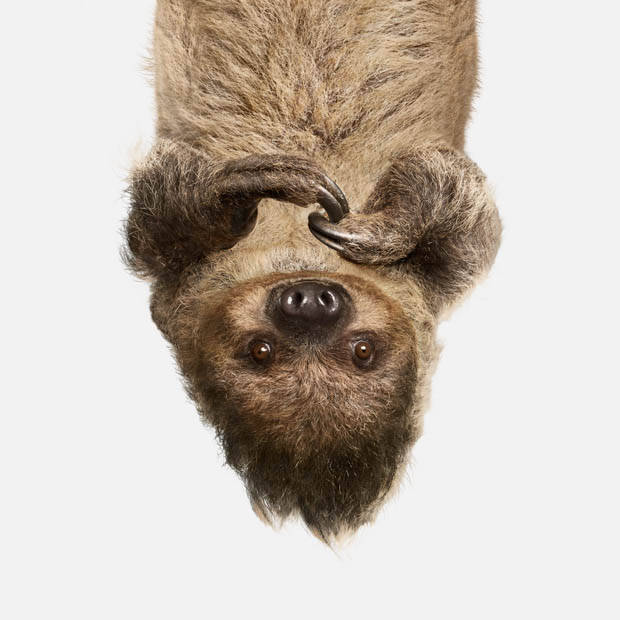 What’s a typical day like shooting wild animals in a studio? Give me a ‘day in the life’ look into one of your sets.
“Similar to any studio shoot, myself and my assistants start by getting the lighting dialed in. Sometimes, depending on what animal I’m shooting, I’ll use a stand-in—usually a big teddy bear—to make sure the light looks right. Then the animal and trainer will arrive. When we’re shooting predators, the first thing that happens is a safety talk with everybody on set. That was one of the most interesting aspects when I first started doing this project. Basically, the trainer talks about each animal and its demeanor, but more importantly talks about how they want you to behave. For example, when we were shooting the bengal tiger we were asked to walk normally and talk normally, but directed not to run or creep around the set—if you start doing something weird or odd the animal will put its eye on you. And that’s what we don’t want to happen. We don’t want the animals to get distracted or feel uncomfortable. Also, they usually ask that everybody stands close together. You don’t want people scattered all over the scene, for both distraction and safety reasons.

“Being in the studio with a big animal, especially a tiger or lion, is an unbelievable experience. I’ve always appreciated cats and predators from a distance, but photographing them in this environment is very up and close personal. When I photographed the bengal tiger, I was three feet from her! It’s an amazing experience—being so close to such a majestic and beautiful animal that at the same time could tear you to pieces. There’s a paradoxical thing happening—there’s the beauty, the power, and the magnificence, but there’s also a sense of danger. From there, it’s all about communication with the owner or the trainer to make sure the animal feels safe and secure, and that we’re doing everything we can to get the shot. I also have to relinquish a sense of control and be prepared to capture very short glimpses of personality that an animal will sometimes give you. If there’s a camera in my hand, I’m hyper-vigilant and ready to capture at a moment’s notice.”

Incredible. What are the key differences between photographing portraits of animals versus portraits of humans?
“That’s a great question. With people, there’s a ton of direct communication, and I treat my human portrait subjects similar to how a director would treat an actor in a role. There’s a lot of communication happening about their pose, their expression, and their feelings. On the flip side, with animals it’s an exercise in letting go and surrendering to the moment. However, I definitely try to frame the shot and get the animals in a pose that will help me capture a portrait that aligns with the aesthetics of this series—a sort of humanistic feel that allows the audience to connect with an animal portrait similarly to how they would with a human portrait. That’s what I really tried to do with this series—some of the shots are anthropomorphized, where we’re kind of applying human traits to animals. But some are more for the purpose of experiencing new kind of a likeness to an animal.” 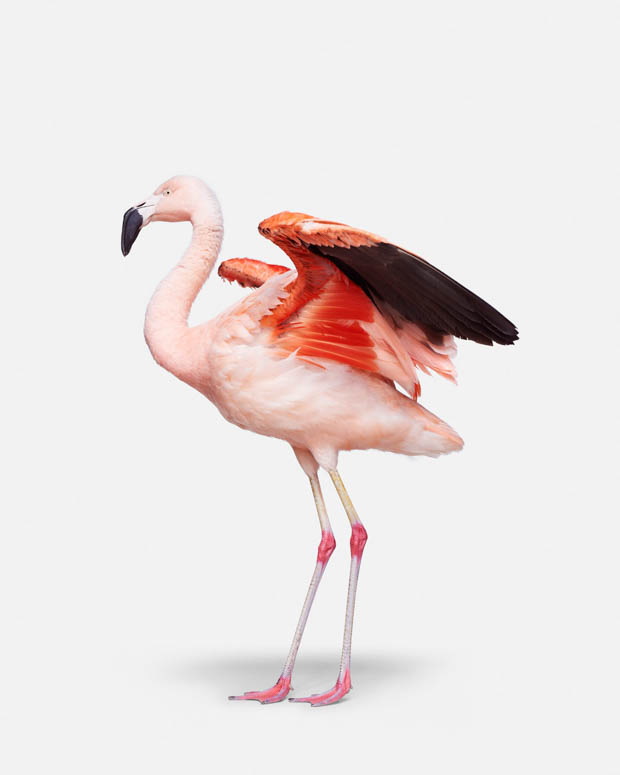 So how do you make that decision? How did you decide which direction you wanted to take with each animal?
“It partly depends on how human-like the animal is. For example, a chimpanzee or even a tiger has eyes that are fairly close together, so they are proportionately similar to a human face. These instances make it easier to capture more of an anthropomorphization—wow, that’s a really long word [laughs]. On the other hand, think about photographing a bird. Look at the shots of the chickens, African crane, or flamingos. They aren’t necessarily humanized; it’s more about creating a likeness for the animal and selecting a visually interesting pose. Then there’s the shot of the ostrich, which has a very fashion-y pose; she has one leg up and is leaning to one side, almost like a human would. It really depends on the animal.”

How long did it take to shoot this project? How did you find so many animals and manage to bring so many of them into the studio?
“This project started about eight years ago by accident. Pentagram Designs hired me to photograph dairy cows for a dairy magazine—there’s only one of those images shown at the end of this book. That was the initial start of this project. This led me to photograph dogs and cats for advertising here and there, then I made the decision to photograph a lion, tiger, and bear. This was more of the true inception of this project with consistent aesthetics. About two years ago, I developed a prototype of the book with Pentagram, and presented it to publishers to gain interest and open the doors to publishing. Once I signed with Rizzoli, they wanted to push the book a year, which actually worked out well because I was able to photograph some animals that I wouldn’t have otherwise.

“To answer your question about how I find these animals and get them in the studio—it’s a combination. Some are from rescue habitats, some come from zoos, and some have personal owners. These resources are fairly easy to tap into in LA, but there are a lot of other resources out there as well. I’m Austin-based, and in Texas I built a network of animal people. Once I found someone with a longhorn, they recommended me to someone with a buffalo. And that was really how I slowly gained access to all of these animals. It was a bit of a long process, and I did have a couple producers that were helping me make it happen.

“As for getting these animals in the studio, some were photographed in a traditional space, but in some cases there wasn’t a studio close by or the cost would have been too expensive. I would basically build a mobile studio with a few lights and a background so I could at least have a clean cut out. If I was in a barn, for example, I would need to be sheltered from the sun so I could control the lighting and keep the aesthetic consistent. Then I would use a large 20-by-20 silk that I would put behind a cow or a horse, whereas in a traditional studio I would shoot on a light grey background.” 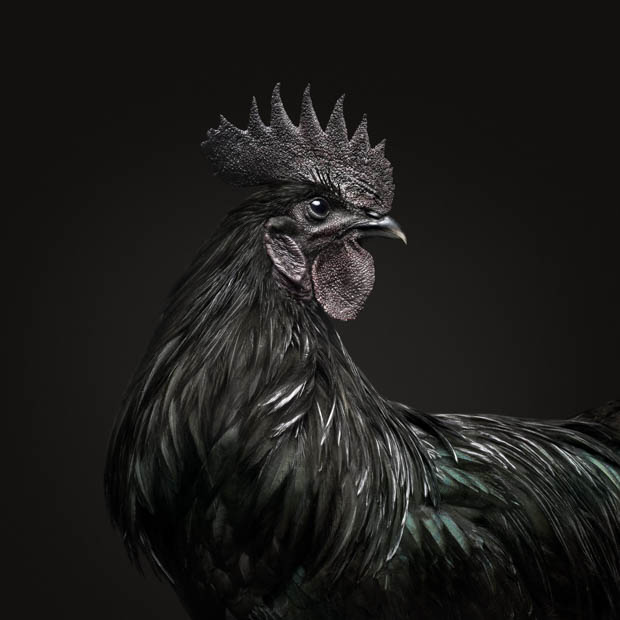 What message do you aim to send with The Animal Kingdom? Tell me about the organizing principle behind your animal portraiture.
“Our connection with animals and mother nature is something I hope people appreciate and enjoy in the book. It’s not a typical wildlife conservation book, but at the same time I believe this take on portraiture can connect us to these animals in a different sense. I remember the first time I saw Richard Avedon’s In The American West portraits on exhibit. These shots are about six feet tall. When I saw them, I felt that person and got a sense of that person. It was chilling in a really beautiful way. I would love to see people to react similarly to these animal portraits, especially if they were seen in large format.

“Another interesting thing I’ve noticed is that a person’s connection to these portraits tends to vary based on how they’re feeling internally. Some people who have seen the picture of the tiger, for example, have said it looks powerful or fierce while others have said it looks sad or focused. There seems to be an inner psychological thing that happens in which the viewer applies their own feelings or experiences to the animal. It’s interesting to me that we as humans see animals and apply human traits to them. But sometimes those traits come from our own feelings, so there’s a form of self exploration occurring as well.” 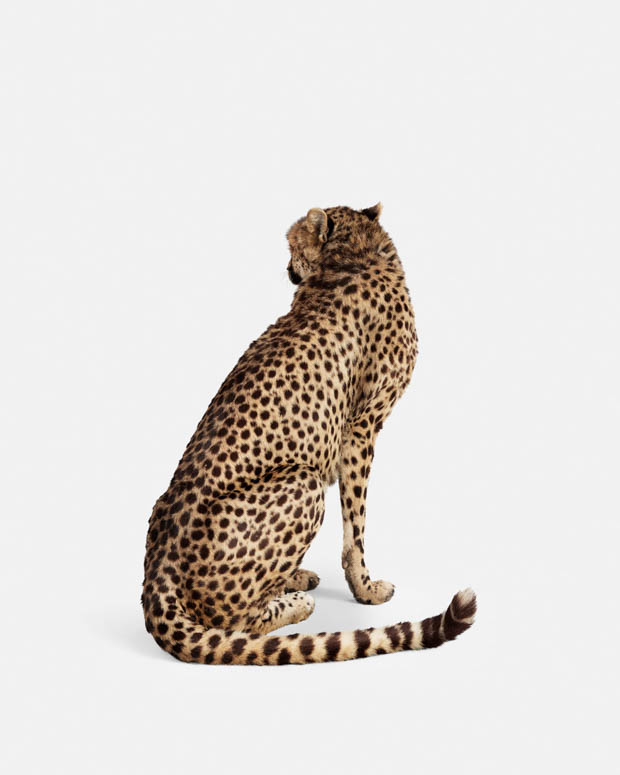 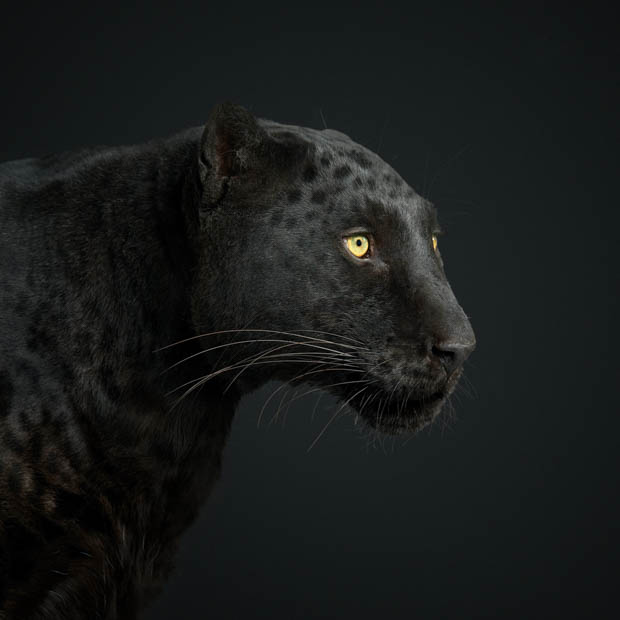 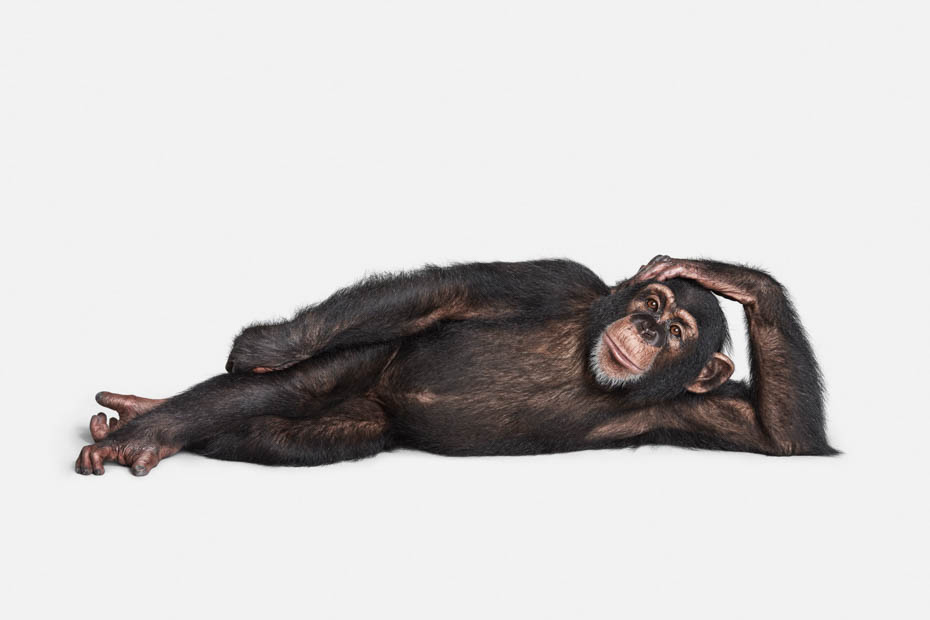 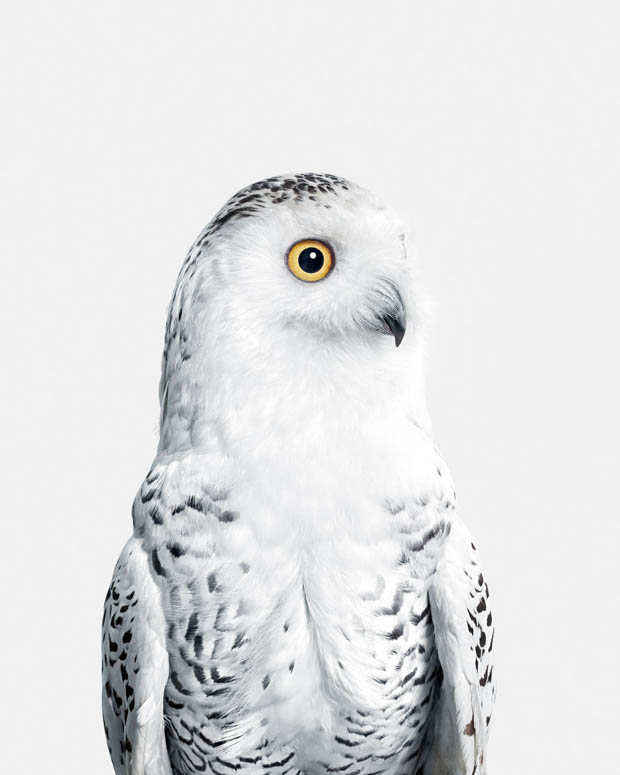 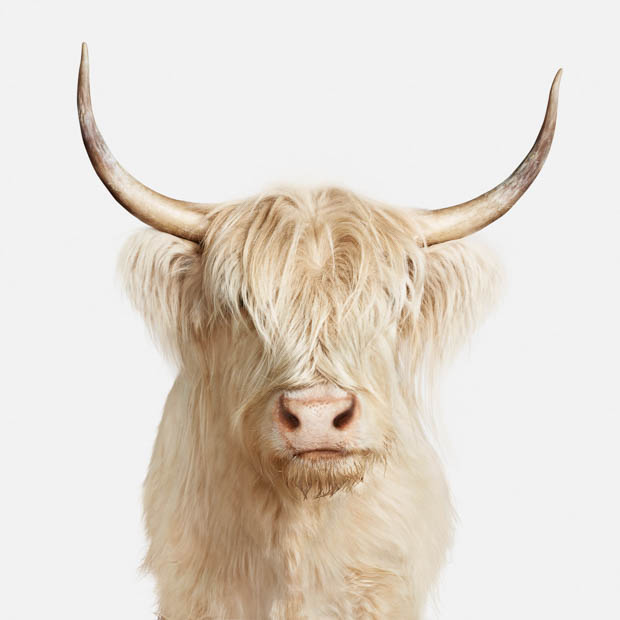