The Enduring Allure of Artificial Reality, in Photos 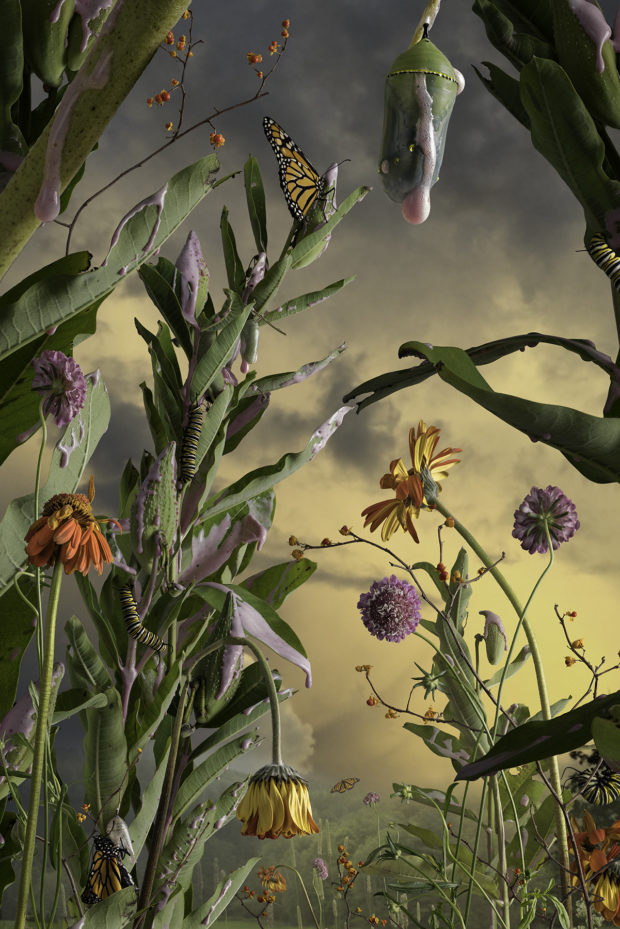 In our never-ending quest to fix what isn’t broken, we have developed a sweet tooth for the chemical burn that comes whenever we add saccharine. This insistence on artifice is driven by an obsession with perfection, one that believes our ideals superior to the miracles nature reveals each and every day – one that has us writing ourselves out of existence quicker than we’d dare to allow ourselves to believe.

But here, in that moment before the dam breaks, we cross the tipping point without looking back. We cast our faith in illusions designed to sell us on an idea, a service, a product – any number of highly desired sources of escape. It is in this fantastical utopia that American artist Jason DeMarte creates fantastical landscapes that tap into our limitless capacity to consume.

In his series, Adorned, which was chosen for the Critical Mass Top 50, DeMarte digitally combines images of fabricated and artificial flora and fauna with commercially produced products to give us what we want – and more of it. DeMarte takes our cravings to their logical conclusion, a place where beauty becomes gooey, and yet it still appeals. These memento mori could not be more prescient of what is to come, as we step into a brave new world where AI, climate change, and late capitalism become the defining forces of our time. DeMarte shares his insights into this extraordinary body of work. 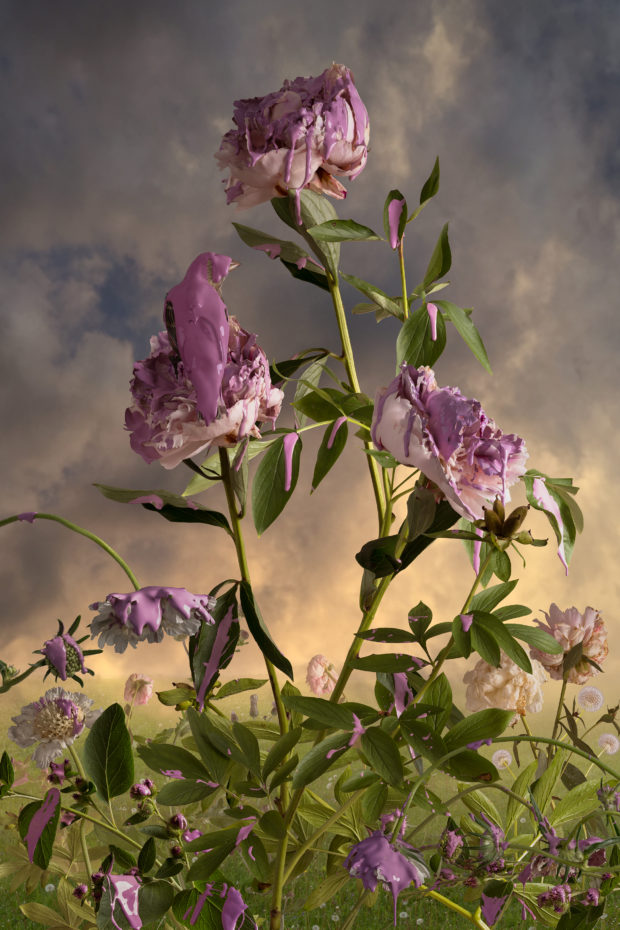 What brought forth the idea of After the Deluge? It seems incredibly timely, in light of the speed of climate change.
“I think all the work in this new series points to a tension between disaster and beauty. After the Deluge gets its title from the historical painting by George Frederic Watts, which depicted the sky after the story of Noah’s flood. I was interested in the idea of cleansing after a time of immorality and the tension in representing that aftermath.

“I also of course liked the how the story of the flood plays into climate change and rising sea levels. I see this work as a fictitious aftermath from an overindulgent culture gone awry, where the world has been so impregnated with our goods that it has become part of it’s very fabric.” 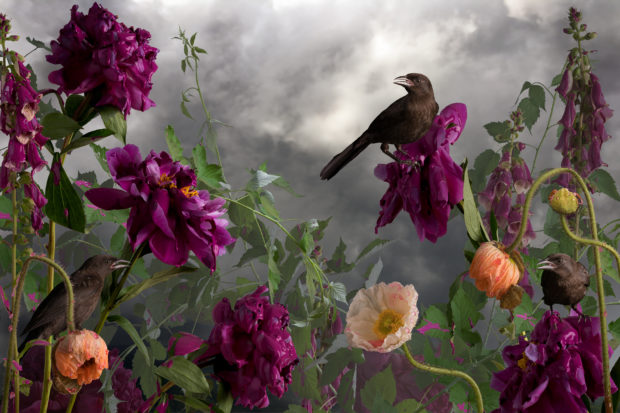 Fog of Tranquility is the perfect a counter state to overexposure and overstimulation. Could you speak about the ways in which the images both fuel and question this state of being?
“When titling this piece I wanted to play off the physical appearance of fog in the image but also reference the idea of fog as being a limitation of seeing or understanding, as in ‘fog of war.’ The idea of a calm before a storm or a moment that seems perfectly benign yet has an undercurrent of unknown tragedy plays into the idea of tranquility or, in this case, the illusion of that tranquility.” 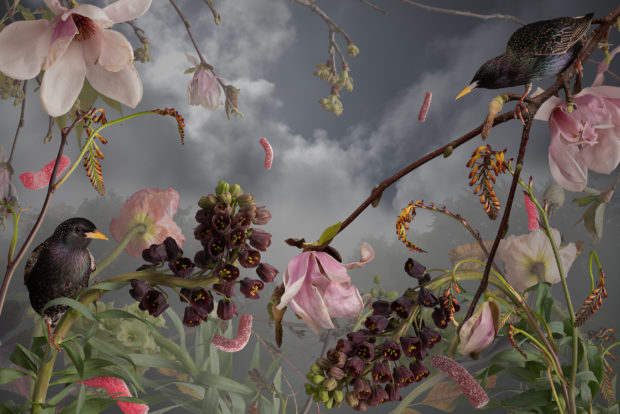 Invasive Empathy is a masterful title for this piece. Can you speak about this idea, and the way we nurture and foment it?
“With most of my work, I start with something physical in a piece and expand from that, here the ‘invasive’ is drawn from the starling birds depicted. Starlings were brought to the United States in the late 19th century as an attempt to introduce birds that appear in Shakespeare’s writings ­– but they have since become an aggressive invasive species completely dominating North America. I am intrigued by the act of manipulating nature to satisfy an esthetic desire and the ultimate consequences of that desire. I examine empathy as it is placated by indulgence, distraction and fatalism.” 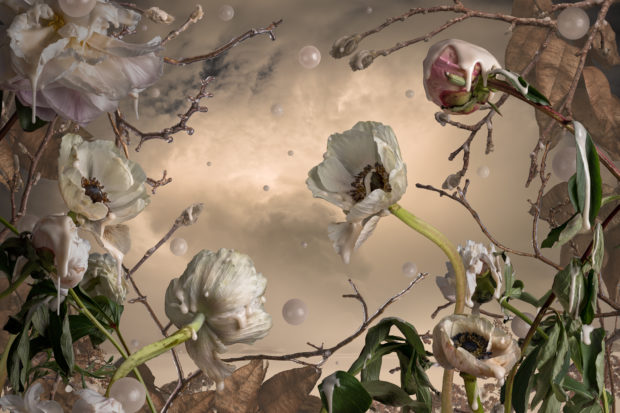 Unseasonal Icing reminds me of something Victorian, a combination of Queen Victoria’s purity campaign, where she stripped rice, sugar, and wheat from their natural state to make them white, because white was pure, and the sentimental romanticism of the era. Could you speak about the ways in which you use these photographs to create moods and spark emotions by pushing the iconography?
“I am interested in conceptual and emotional contradictions, and I work to subvert various photographic tropes and iconography by playing on emotional impulses, namely the sublime. I use beauty as an entry point to the work; I find that this is an effective way to capture attention and it’s a language that we all understand.

“The challenge is finding ways to subtly subvert the sublime while keeping it intact, to create a piece that highlights that contradiction in a meaningful way. Iconography, symbolism, the figure, and juxtaposition are all strategies I use to achieve this.”

As time passes, it appears that the love for artificiality only increases. What do you ultimately make of this desire and the way in which it manifests in our investment in creating an unnatural world?
“I think the more the work evolves the more I am interested in this complex relationship, especially when it seems both worlds have become so intermingled in their evolution that they are now almost symbiotic. That complexity is where I find myself most inspired.” 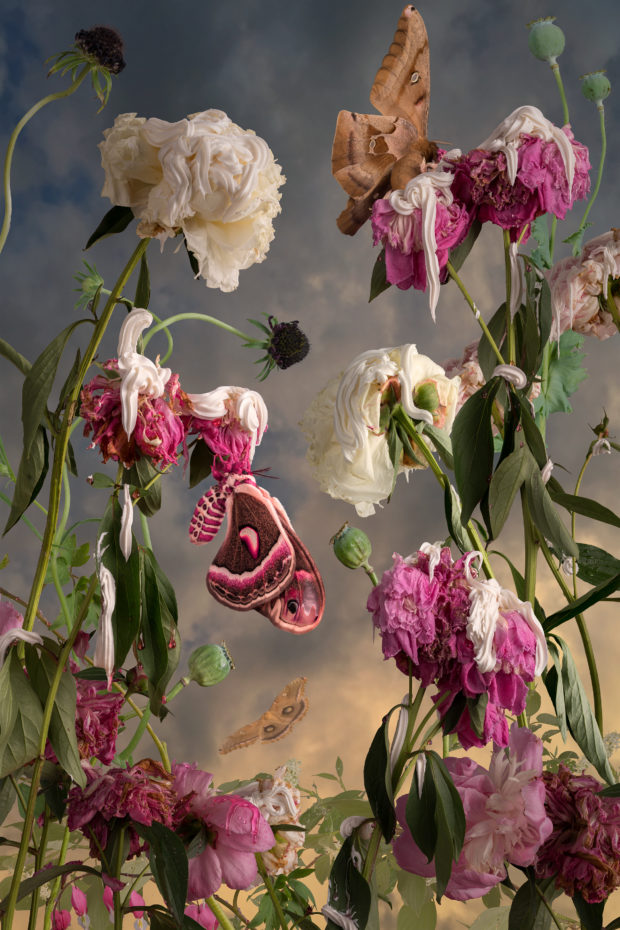