Orphaned Elephants and the People Who Rescued Them, in Photos 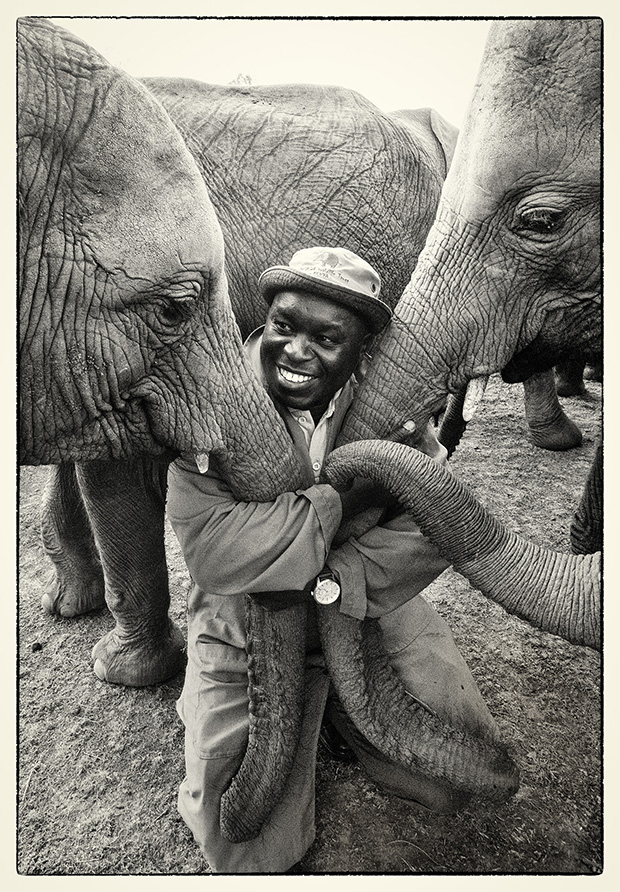 Edwin, Head Keeper of the Nairobi Nursery with elephants Ndotto and Mbegu. You should have heard the rumbles of love as I photographed this group hug. © David Sheldrick Wildlife Trust / Mia Collis. 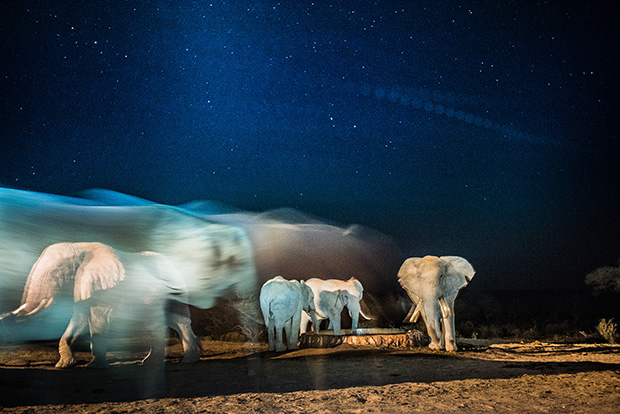 In 2014, Jacob Putunoi, a young Kenyan boy, helped save an orphaned elephant named Mbegu, who had just barely escaped an attack by humans. Jacob discovered her hiding place while herding his goats, and he brought brought her to Peter Kameru, the Warden at Naibunga Conservancy. Peter protected her from harm until team members from the David Sheldrick Wildlife Trust could arrive and bring her to safety. “I was afraid at first,” Jacob later said. “But when I saw she was small like me, I lost my fear.” He was eight years old at the time. Mbegu was seven weeks.

Jacob and Peter are just two of the individuals honored in The Unsung Heroes, the last publication by Dr. Dame Daphne Sheldrick (1934-2018). The book, photographed by Mia Collis, researched by Yolanta Volak, and produced by Angela Sheldrick, tells the stories of people throughout Kenya who  accomplished miracles on behalf of elephants. Because of these courageous individuals, who sometimes put their lives on the line to defend orphaned elephants, the DSWT has been able to rehabilitate hundreds of babies whose parents have, in many cases, been killed by people. When they grow up, they reintegrate into a herd in the wilds of the Tsavo Conservation Area. Despite the cruelty that often marked the early years of their lives, the elephants at DSWT are able to heal through the kindness of individual humans. As Dr. Sheldrick writes in her introduction to the book, the mothers, once grown, frequently bring their wild-born babies back to introduce them to the dedicated keepers who reared them in their youth.

Dr. Sheldrick passed away in April, but she was able to see the final manuscript of The Unsung Heroes before her death. Her daughter Angela, looking back on the day after she lost her mother, told A Beautiful World about an encounter she had at the elephant nursery. A herd of dozens of elephants approached her, a rare event she understood to be an acknowledgement of her grief. In the front was Mbegu, that small elephant rescued in 2014, leading the procession. We asked Collis to tell us about her experience photographing the book. Find The Unsung Heroes here. All proceeds from the book go towards helping the DSWT continue their crucial work.

How did you first learn about DSWT?
“Growing up in Nairobi, I’ve known about DSWT and their work since I was a child. It always seemed remarkable that just over the other side of a bustling city, in a little oasis of peace, a woman named Dr. Dame Daphne Sheldrick and her family were rescuing orphaned elephants. I didn’t know the family personally, but I’d always been in awe of the work they did. Angela Sheldrick, Daphne’s daughter and CEO of the DSWT, thought up the idea for the book. She called me in early 2017 to see if I’d be interested in photographing it for the Trust. It was a beautiful assignment that I took as a great privilege to do.”

How did you spend your days while working on the book?
“I spent many early mornings at the Nairobi Nursery. I’d arrive before sunrise and then wait for the keepers and elephants to wake up. I discovered that baby elephants, like humans, snore. It was a beautiful time to shoot. The elephants are just like children: they wake up at the crack of dawn then wait eagerly by their stockade doors for the keepers to wake up and let them out to play.

“The book focuses on brave individuals who went to great lengths to save an elephant before the DSWT actually got there. Many of the ‘heroes’ live in far and remote places of Kenya. The research writer Yolanta Volak (Yoyo) and myself were assisted by the DSWT funded VET teams, who knew those areas of Kenya well and were the primary responders to the rescue call.

“Our days were spent journeying to the location. I would photograph the landscape, which was key to explaining not just the remoteness of the area but also how varied and beautiful Kenya is. We would spend about a day with each subject in the spot where the elephant was rescued. I’d take their portrait in their own environment and Yoyo would record their story.

“At the reintegration units in Tsavo, we traveled to the stockades for the first milk feed at 6am. The elephants were up and excited to go out into the bush. We would then spend the day walking with the herd and photographing. At dusk, I’d leave with that same feeling when you leave a school yard. The personalities and social interactions of the elephants were extraordinary to witness and very similar to children.” 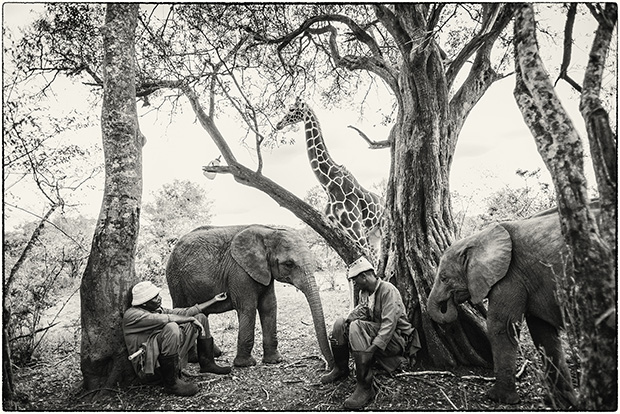 A typical scene at the Nairobi Nursery with Kiko the orphaned giraffe, who tags along sometimes. © David Sheldrick Wildlife Trust / Mia Collis.

Did you get to know any of the keepers?
“I got to know many keepers working at the Nursery and the reintegration units during the course of the book. They would watch out for you in the bush as well as being the link between the elephants and you. They would translate the elephant social interactions into human language. This knowledge about the characters and their individual quirks became invaluable in understanding and then photographing the elephants for the book.

“One story that stands out significantly is Julius Shivegha’s. He’s assistant head keeper at the Nursery and also one of the team of rescue keepers who administers the life-saving first aid when the babies are found. I won’t go into great detail as the story is in the book, but Julius, along with a Peter Kimeru (one of the Unsung Heroes), negotiated a violent mob vying for the life of baby elephant Mbegu. It was a frightening scene, and they both talk about the fear of not making it out alive. They did through fierce diplomacy, and it makes a remarkable story. Mbegu is now a little matriarch amongst her peers.”

Did you witness any human/elephant interactions that stood out to you?
“Quite often in Ithumba and Voi, the orphan herd are joined by ex-orphans or wild elephant herds. The DSWT welcomes this integration as it helps with the transition back into a wild life. On this particular shoot day in Ithumba, we were joined by a completely wild herd. Full adult elephants make a large seven-year-old elephant look like a baby again. The keepers intelligently distanced us humans to the other side of the orphan herd, and humans, orphans, and wild elephants walked together that morning. 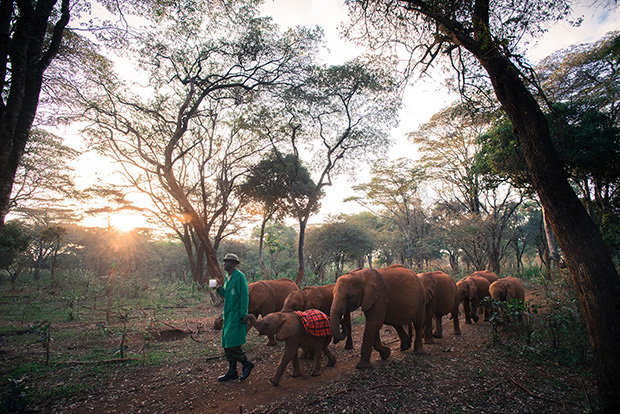 Did you personally bond to any of the elephants?
“I adopted Ndotto because he was so friendly and welcoming right from the start. It was like being embraced by the friendliest kid in the classroom. I do have a soft spot for the naughty ones, though. Yoyo got pushed over twice on our very first day by the same mischievous baby Esampu, described by some keepers as ‘the naughtiest little girl they’ve ever had,’ and the two of us got chased around a tree for about ten minutes by young bull called Rapa. The three of us were running round and round in one direction, like a cartoon. Rapa had his ears out and thought this was just the best game ever until a keeper finally saw what was going on and intervened.”

What is it like to physically stand in the presence of these animals, outside of a captive environment? What was it like to see them feel truly safe and free?
“Gratitude is pretty high up there. Fundamental for the DSWT and what they do in enabling these creatures to roam wild again. Dr. Dame Daphne Sheldrick described being amongst the elephants as a great privilege. I think this is a wonderful word for it. I have a feeling of awe and a deep respect when I’m standing with them.” 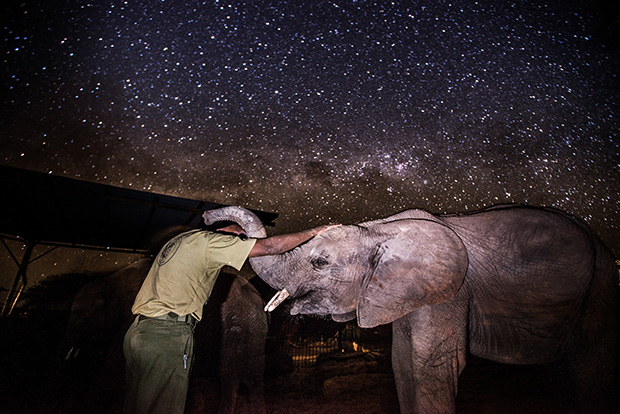 Might you share one moment you’ll never forget?
“In DSWT’s Ithumba Reintegration Unit in Tsavo, I wanted to photograph the elephants going to sleep at night, under the stars. As well as being technically difficult, I had to get an elephant subject who would stay still for a long exposure without being startled by a torch, walking away, or trying to push me over. It was a tall request for the DSWT Keepers.

“Benjamin Kyalo, Ithumba’s head keeper, entered the stockade with me and slowly talked to a seven-year-old bull named Boromoko. The creature repeatedly let out rumbles of love towards him. They had this beautiful and long hug, and eventually Boromoko fell a sleep standing up with his forehead touching Benjamin’s. All this was under the African Milky way. The pictures were incredible, and the experience I’ll never forget.” 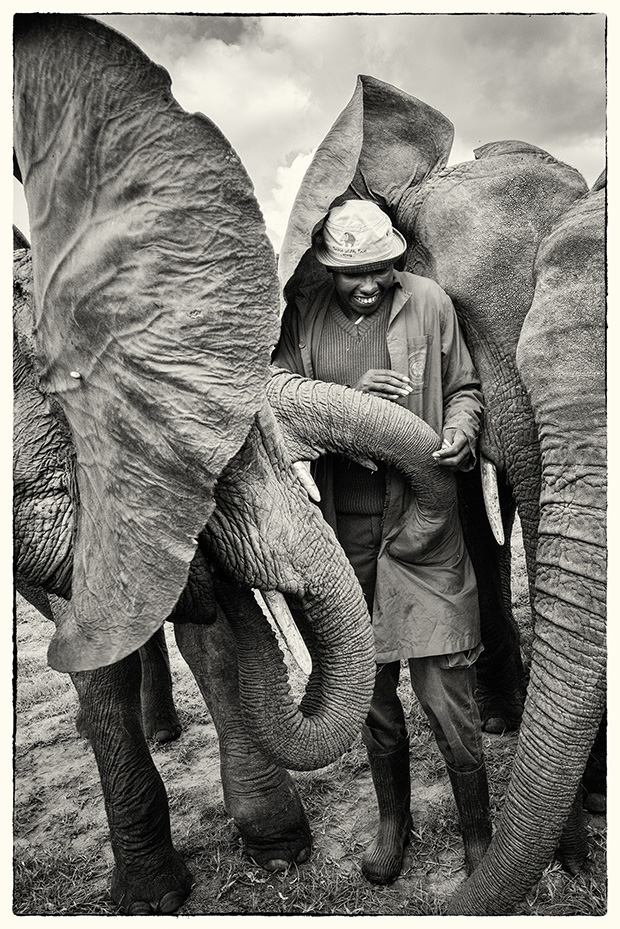 Evans, a keeper at Umani Reintegration Unit, had Acacia seeds in his pocket, and the elephants certainly wanted them too. © David Sheldrick Wildlife Trust / Mia Collis.

Did you know Daphne?
“I got to meet Daphne during the latter years of her life, particularly during the making of the book. She seemed effortlessly graceful and emanated wisdom.”

What will you remember most about her?
“Her legacy. Angela Sheldrick, Daphne’s daughter, now runs the ship. On a daily basis, the DSWT is treating and rescuing injured wildlife through their many VET funded teams, protecting vast tracts of wild land, educating children in conservation, erecting miles of fence lines to protect wildlife and community, de-snaring, doing daily anti-poaching patrols… the list goes on. You just have to go to their site to see it all.”

How can we help support DSWT and the work they do?
“Anyone and everyone can partake in the orphaned elephant foster program by adopting an orphaned elephant for a year. This is how they fund the orphans project, with many people around the world choosing an elephant to foster. It is a minimum of US $50 a year, but you can foster for any amount over and above that too. It is such a worthwhile thing to do, and it makes a wonderful gift.

“In today’s crazy world, it is special to be able to give something like this—so novel and at the same time educational, all the while supporting such a worthy cause. Another way to support is directly through the David Sheldrick Wildlife Trust charities in either Kenya, UK, or the USA by making a donation. This can be done through their website, www.sheldrickwildlifetrust.org, or directly through their 501 (c) 3 in the USA , DSWT UK or DSWT Kenya. All details can be found on the Trust’s website. 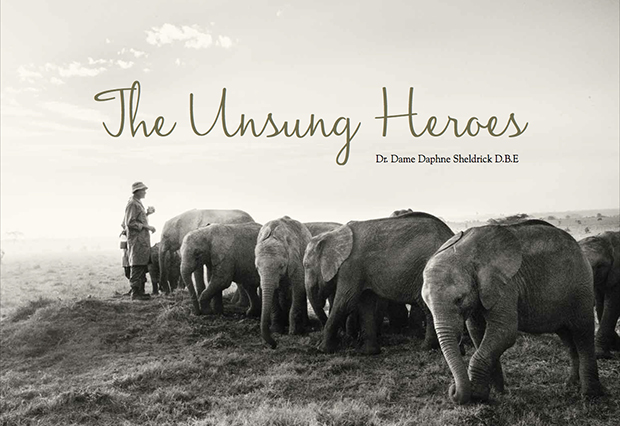