Exploring the Chimerical World of Fantasy in “Korean Dreams” 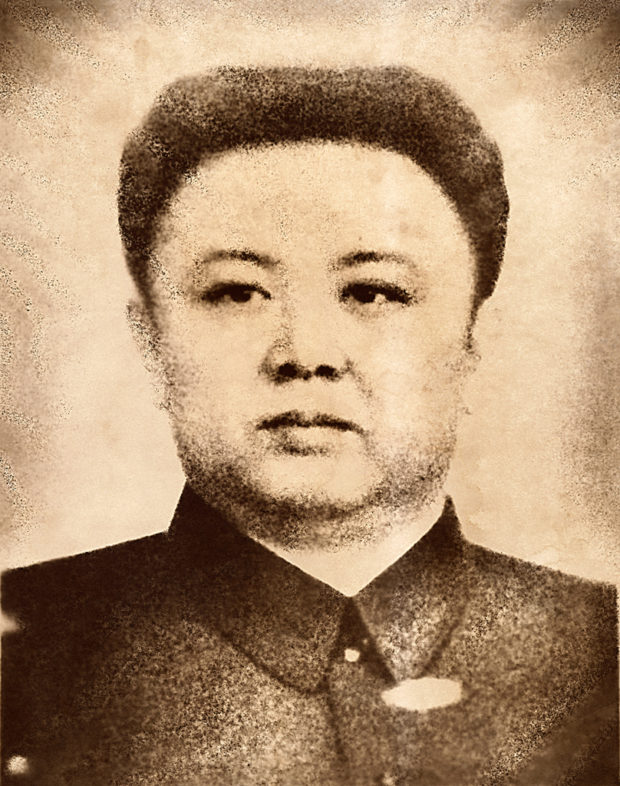 Kim Jong-il
Kim Jong-Il was the Supreme Leader of the Democratic People’s Republic of Korea between 1994 and 2011. Affectionately referred to as the “Dear Leader”, Kim Jong-Il presided over a highly repressive regime that controlled virtually every aspect of political, social and economic life. Note: The North Korean government website once stated that Kim Jong-Il was the world greatest golfer and never needed to urinate or defecate. 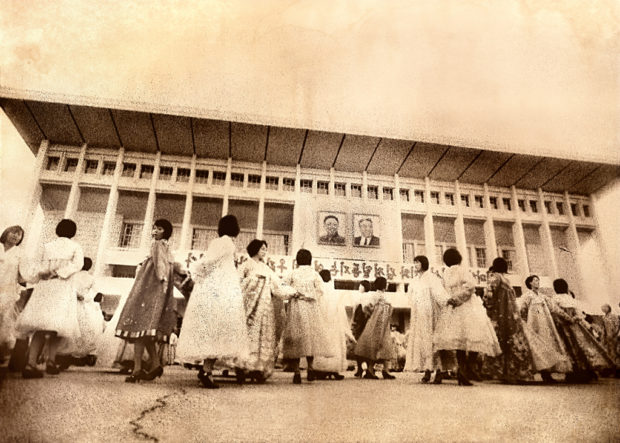 Mass Gathering
The North Korean constitution guarantees the freedoms of speech and assembly but in practice the regime does not tolerate any challenge to its authority or propaganda machine. Gatherings outside state-organised civic events and ceremonies are strictly prohibited in order to prevent the spread of dangerous liberal ideas.

The media will have you believe we live in a post-truth world – but what they fail to mention is, this is the way it has always been. Misinformation, disinformation, deception, deceit – the powerful have always sought to use smoke and mirrors to cover their tracks. In a world ruled by 24/7 communications, we have amplified the divide between illusion and reality, opinion and reportage.

Yet, the systems that distort, erase, and wholly rewrite history exist within all cultures, regardless of wealth and technology. Consider North Korea, a nation that exists as both a fantastical image and a quixotic mystery to the world. The distance between these two realms has captivated Canadian photographer Nathalie Daoust.

In her new exhibition, Korean Dreams at the Gadsden Museum of Art in Gadsden, AL (September 7-October 29, 2018), Daoust has created a series of photographs that act a metaphor for the way information is manipulated in North Korea. During the development stage, Daoust deliberately obscures her photographs. As the layers of film are peeled off, information is “lost,” and what remains is a haunting shadow of the original – it’s truth no longer evident, or even essential to the viewing experience.

Although foreigners are closely followed, and photographs are only allowed in a small number of state-approved locations (and expressly forbidden of military personnel), Daoust carefully made use of a hidden shutter-release cable in order to take pictures secretly in non-approved locations. As a result, she was able to bring back scenes of North Korea never seen before, images of prisons and concentration camps, the military and elections, health care and famine. Here, Daoust shares her experiences creating this haunting body of work. 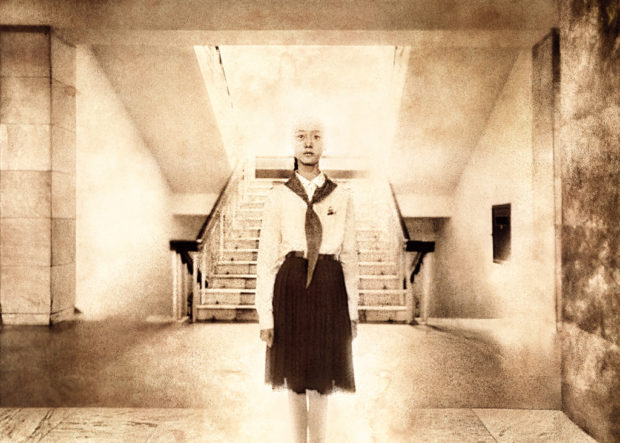 Schooling
Education is universal and state-funded. According to the CIA North Korea has a 100% literacy rate and students have to complete a three-year, 81-hour course on Kim Jong-un. Note: In the 1990s all teachers were required to pass an accordion test before being able to receive their teaching certificate.

What inspired the creation of the series Korean Dreams?
“I was working on a photo documentary on North Korean women living and hiding in China and working in the sex industry. I thought that it would be important for me to travel to North Korea to understand better why these women would rather live in such conditions in China than remain in their own country with their friends and family.

“Having experienced North Korea in the flesh, I felt compelled to create a separate series of images on the real conditions that exist inside the country in order to raise awareness around the plight that millions of people live in.”

Could you speak about the ways in which fantasy plays into our desire to create images of self and the world, and the way that North Korea exemplifies this profound human phenomenon?
“Maybe, in this strongly internet-influenced, high-tech world where we need to create a public image of ourselves, North Korea is a extreme society-sized example of this.

“Foreigners are closely followed at all times and are prohibited from leaving their hotels at night. Photographs are only allowed in a small number of state-approved beautified locations and un­der no circumstances may images be made of military personnel. The image they show to the world is tightly planned and controlled. In the ideal picture they have created, there is no dissident voices, no opposition, no riots. 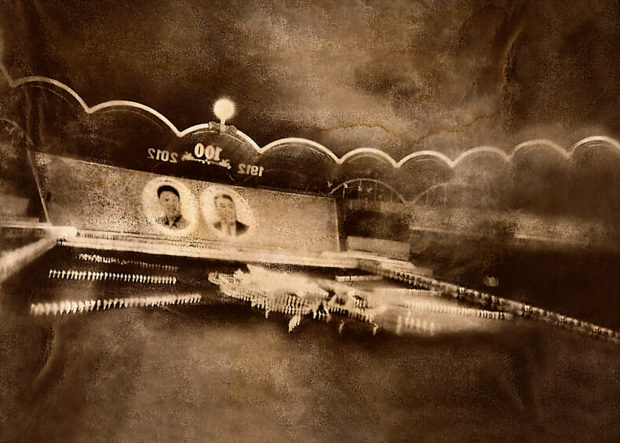 Arirang
The Arirang Mass Games is performed simultaneously by 100 000 gymnasts and celebrates the heroic exploits of North Korea’s great leaders. Behind them, 30 000 children hold up coloured cards to create a ‘human billboard’, where each child becomes a pixel in a constantly changing backdrop. Children as young as five are selected for the Games and trained twelve hours daily during the months preceding the event.

“Until I went to NK, I didn’t understand why the people of North Korea did not just stand up and fight for their freedom after so many years of repression. However, after being there and doing extensive research on the country, I now understand and have great sympathy for the situation in which the North Korean people find themselves. Executions and false imprisonment are commonplace. You can be sentenced to ten years in prison for just wearing jeans, which are forbidden by the state.

“As an extra deterrent, a ‘three-generation’ policy has been implemented. This means that, even if you are willing to risk your life for the greater good of freeing your country, if you get caught, your children, parents and grandparents also receive the same punishment. This makes change almost impossible.

“This ‘fantastic’ social engineering also extends to the way people interact. I met many great people in North Korea. The only problem is that I never knew if they were being genuine or just telling me what they thought I wanted to hear. When I was there, there was a law that if you spoke to a foreigner you had to then report it.

“So most of the people we talked to where people that where allowed to talk to foreigners and where trained for it. I did meet many nice and interesting people but I sometimes wonder if I really met them or if they were just acting as the government wanted them to. From what I understand, this is everyday practice among themselves as well since everyone is supervising each other.” 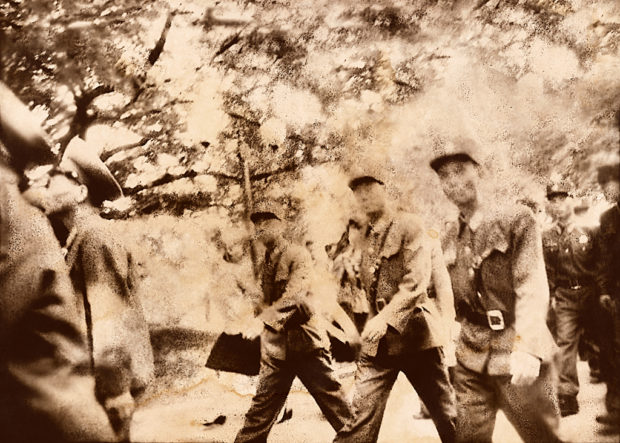 Three Generations of Punishment
North Korea law specifies ‘three generations of punishment’. If you commit a crime, your chil-dren and grandchildren will also receive the full brunt of punishment, which often involves a lifetime in prison. Children born in prison are raised as prisoners because their “blood is guilty”. Instituted in 1950, this law was supposed to eliminate the blood linage of counter revolutionary North Koreans after the war.

How did you decide on the iconography you wanted to showcase in the exhibition and how do these aspects of culture and society speak to qualities of the North Korean self-image?
“The blurry images, faded faces, empty spaces, military presence, choreographed shows and non-spontaneous life are mirrors for North Korea, a country so isolated and impenetrable that it is difficult for people (inside or outside) to gain any sense of what is really going on. The most unsettling aspect was the contrast between the fictional world that the government would like you to believe versus the conditions that the North Koreans are actually living under.”

Can you describe the way in which your process mirrors qualities of North Korean culture, from the deliberate obscuring during development to the layers of film being peeled off?
“To produce the collection, I used a printing technique that mimics the way that information is lost through the myriad layers of oppression and censorship that exist in North Korea. Starting with the original negative, I exposed photographic paper in the darkroom to create an initial image. I then removed the backing from the photographic paper and used this new ‘negative’ to expose another sheet of paper. I repeated this processes six or more times to create final images that are heavily blurred to represent North Korean society, its missing information and truth concealed. They also capture the strong sense of detachment from reality that I felt when I was there.

“For example, in North Korea, it really felt like everyone I met was ‘not there’, disconnected and beyond reach. I never felt that I was able to form a clear picture of North Korea and that most of the information I was told was obscured. That is why I developed a technique in the darkroom to instill the images with this same feeling.” 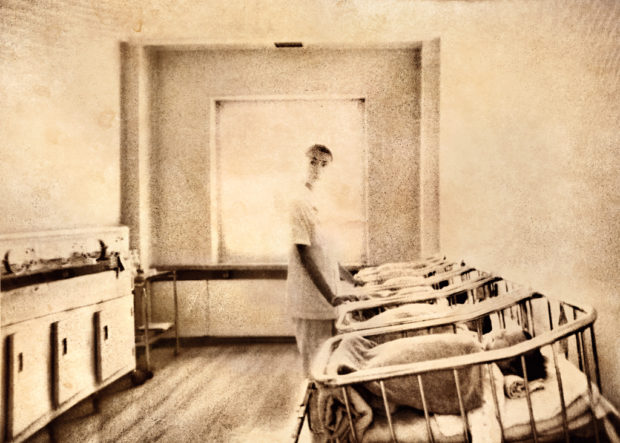 Health Care
In 1947, free healthcare was introduced for all citizens in North Korea, but the system collapsed in the late eighties. Many hospitals operate without electricity or heat and all patients have to buy their own medicines. While visiting a hospital we were told that no handicap children were born in North Korea since the 1950’s due to their strong genes. Note: A North Korean doctor who defected, Ri Kwang-chol, has claimed that babies born with physical defects are rapidly put to death and buried.

Can you speak about the ways in which the photograph can simultaneous reveal, dissemble, and conceal truth, and the significance of bringing a curious and questioning eye to the image?
“What I love about photography is that it shows ‘reality’. However, a raw negative does not always express the feeling, interaction, atmosphere, and connection felt between the subject and location. This is where the darkroom comes in. I can manipulate the photos to represent how I felt in that exact moment.

“Also, this complete lack of knowledge and information makes North Korea confusing. Even some of the people that have escaped and told the horrors of what was happening have been reported to have lied. So it is very difficult to know what is true and what is fiction. But after going there in person, I have to admit that it was worst than what I expected, not because of what I saw, but more because of all the little things that you understand along the way. For me the ‘manipulation’ is done to represent the actual feeling I had while taking the picture.” 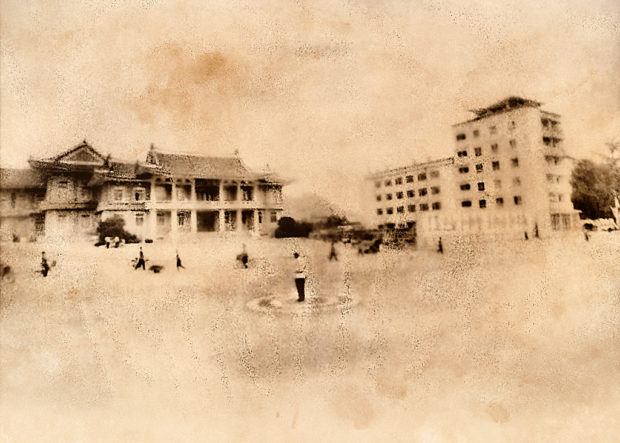 Traffic Lights
Virtually none of the traffic lights in North Korea operate due to constant electricity cuts and poor maintenance. Instead, policemen and women operate like machines, standing at the centre of many intersections, to control the few cars on the road. 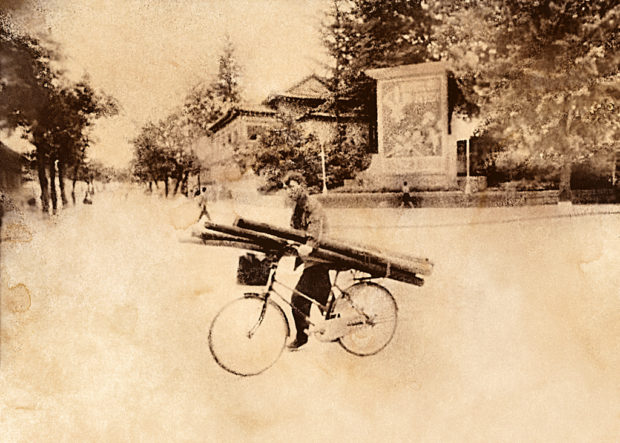 Bicycles
The late Kim Jong Il reportedly felt that the sight of a woman on a bike was potentially dam-aging to public morality. It was the last straw when, in the mid nineties, the daughter of a top general was killed on a bike. From this point forward, the law has periodically banned women from riding bicycles and they are generally restricted from holding driving licenses.