The Vulnerability of Pit Bulls, in Photos 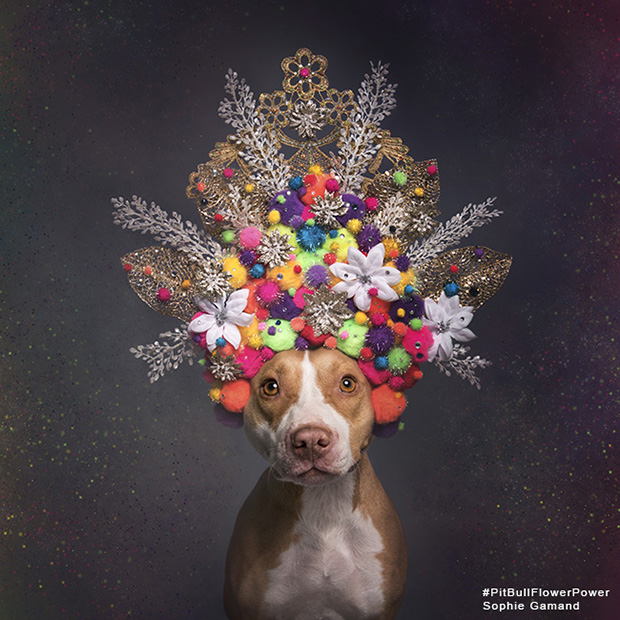 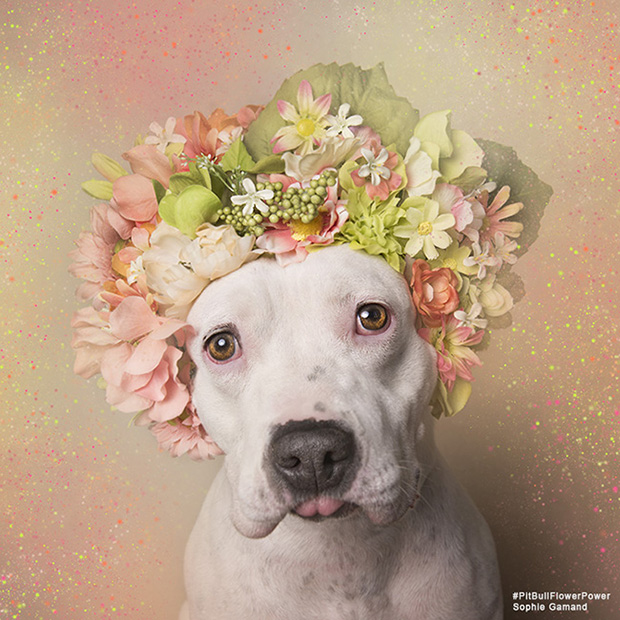 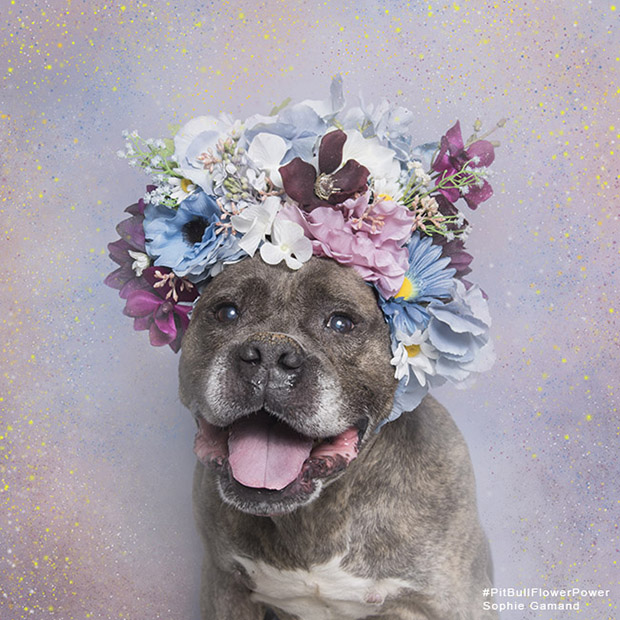 When the photographer Sophie Gamand first pitched her Pit Bull Flower Power book to publishers, she faced resistance. One suggested, “Nobody cares about pit bulls.” Gamand is familiar with this sentiment. Over the four years she’s spent photographing the misunderstood dogs, she’s learned some painful facts: about one million pit bull type dogs die in shelters each year because they do not find homes. Approximately one out of every six hundred is adopted. In the United States, a pit bull is euthanized every thirty seconds, due in large part to an unwarranted stigma fed by biased and negative press. Abuse and neglect effect hundreds of thousands of individual animals. But at the same time, Gamand has also discovered another truth: families around the world have pit bulls they love and cherish.

Gamand experienced that bond firsthand with Frida, a pit bull she met at Riviera Rescue in Mexico. The rescue takes in and rehabilitates homeless dogs, often those who have suffered trauma. Frida’s former owner had broken her back, and because she had no treatment until she was rescued, her legs calcified. She was paralyzed. She had been forced to breed. Her puppies were sold. Early this year, the photographer set a plan in motion to bring Frida to New York.

Once Frida arrived, she stayed at the non-profit Animal Haven and later transitioned into Gamand’s home as a foster. She received a wheelchair. Frida was recently adopted into a permanent family. She has a yard of her own. “As I said my goodbye, my good, good girl let me press my face against hers,” the artist wrote at the time. “I dried a couple of tears in the fur of her cheek, and off they went.”

Gamand includes her portrait of Frida as one of the rewards in her current Kickstarter campaign for Pit Bull Flower Power, a collection of her photographs of dogs wearing handmade floral crowns. In Gamand’s pictures, pit bulls express their true nature; in contrast to the violent imagery that too often accompanies this type of dog, she captures their vulnerable souls. While all the crowns are one-of-kind, Frida’s was particularly special. The artist devoted an entire day to its creation. “Frida’s story will be central to the book in many ways,” she tells me.

The tenderness Gamand saw in Frida is typical of pit bull type dogs, contrary to the fear and misinformation associated with these animals. In October, a woman who adopted a senior dog named Gladys from the Town of Hempstead Animal Shelter in Long Island wrote to the photographer. “I recently lost Gladys,” she explained. “September 1st, I had to put her down. Cancer had pretty much taken her over, and I always told myself she had suffered enough in her life, and she would never suffer with me. I just want to thank you for taking that picture, because Gladys changed my life. She really did. I miss her so much and my heart is still broken, but I’m glad I got to have almost three years with ‘Sassy Glady.’ I’m sure I’m not the only one who has you to thank for their sweet baby.”

Pit Bull Flower Power, set to be released this October, is a tribute to dogs like Frida and Gladys and the people who love them. Though Gladys is gone, her portrait remains a constant reminder of this loyal animal’s ability to forgive and enrich the lives of others. Many of Gamand’s muses are still waiting for their people to find them. You can find the details for just a few of them in the captions for these images. Contribute to the Pit Bull Flower Power Kickstarter here. Gamand will exhibit the series at the Superfine! Art Fair in NYC through Sunday, May 6th. 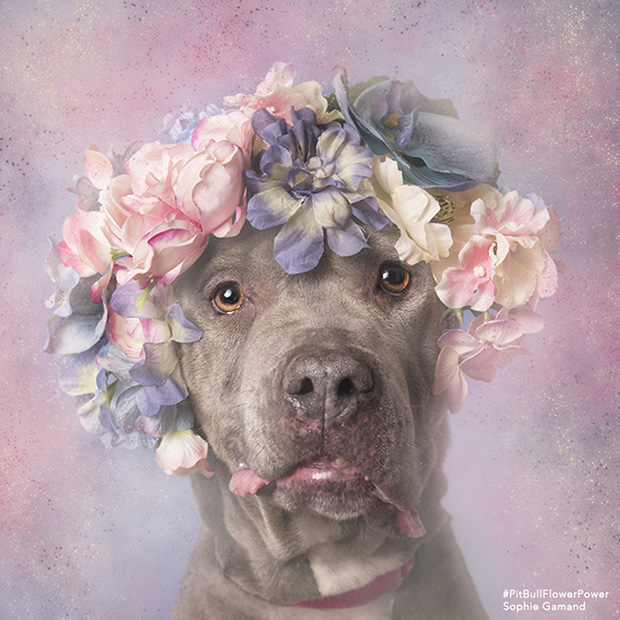 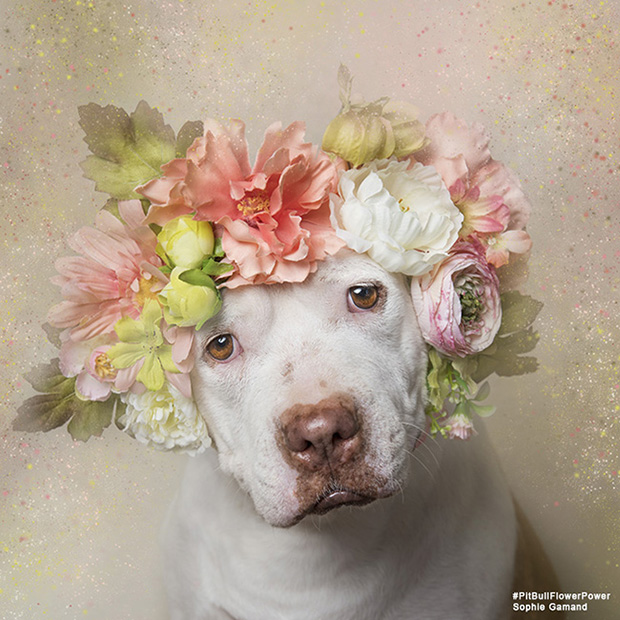 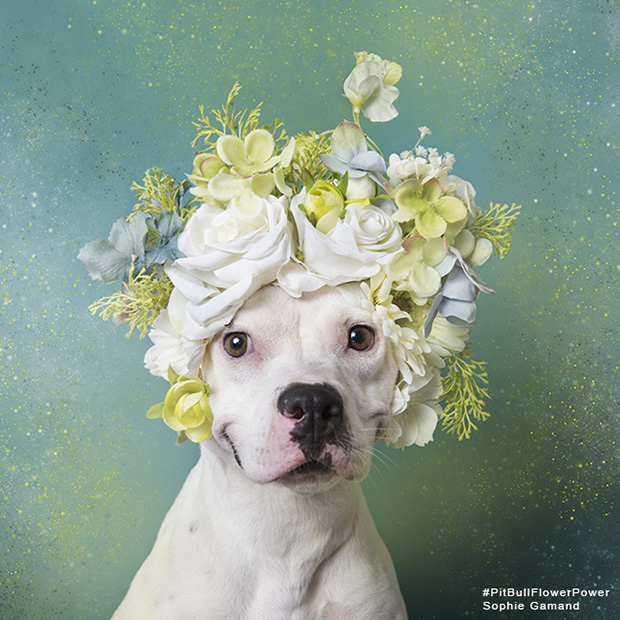 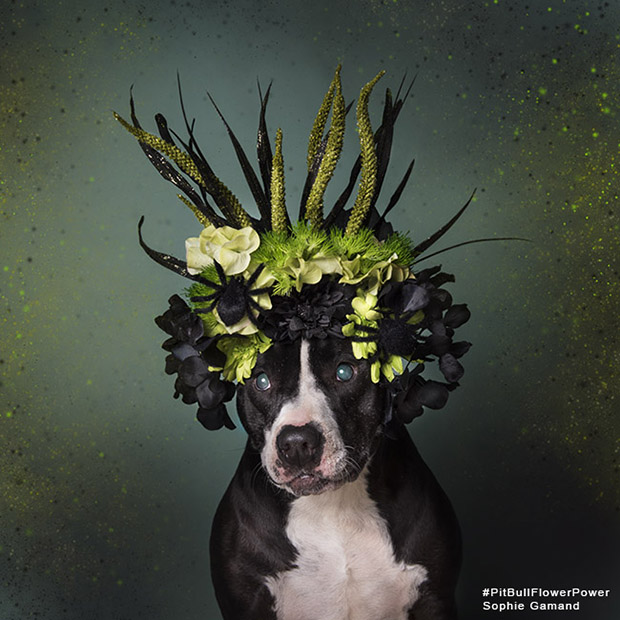 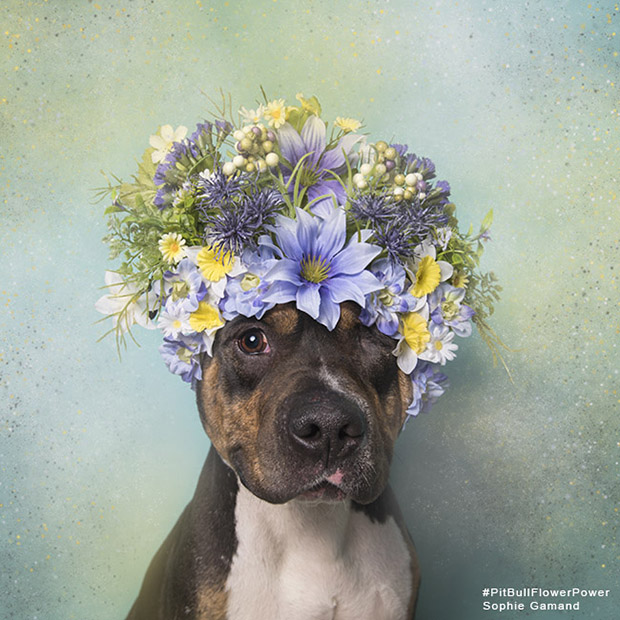 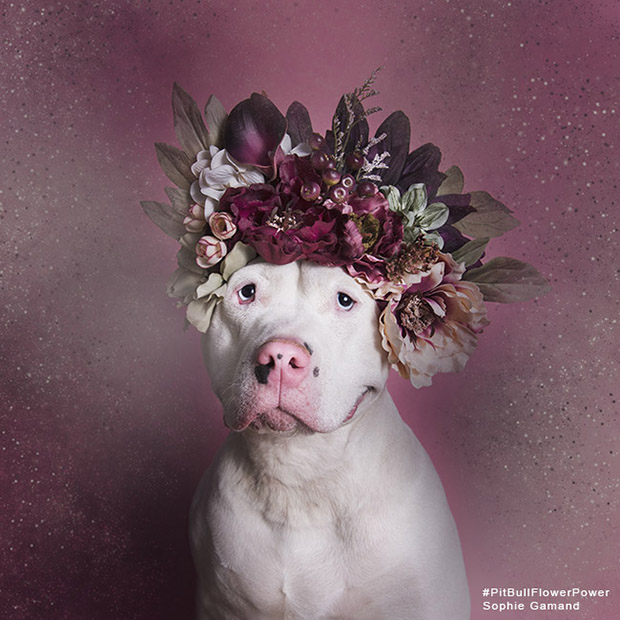 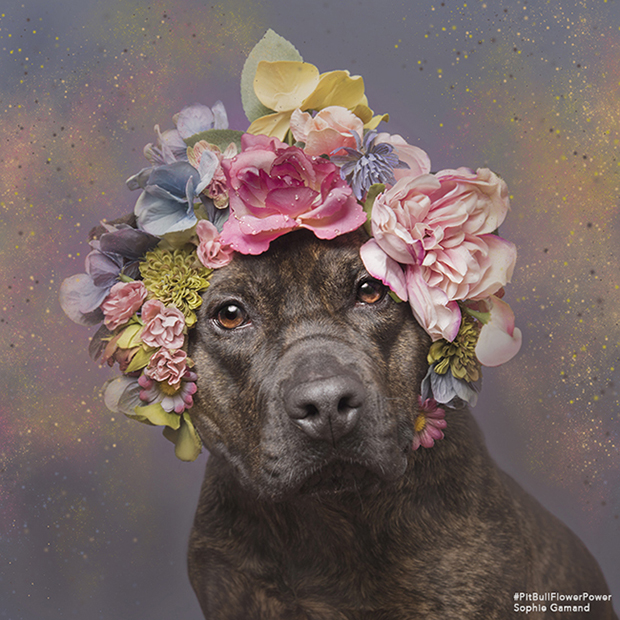 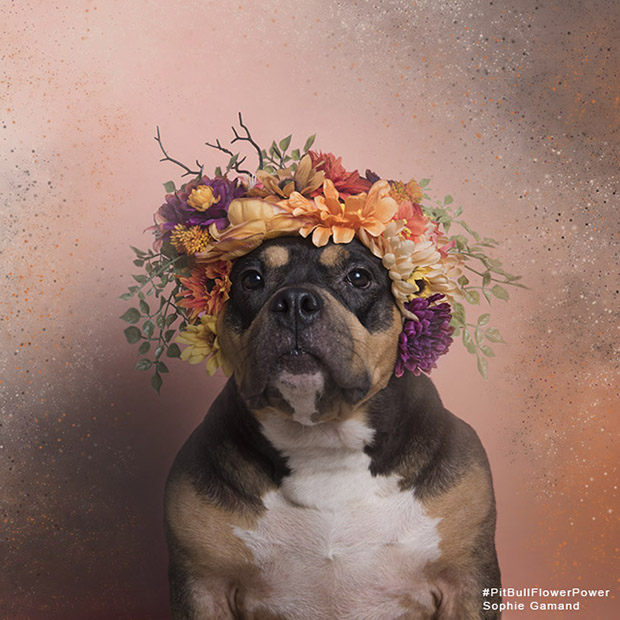