Inside the Daily Life of a Veteran Who Is Experiencing Homelessness 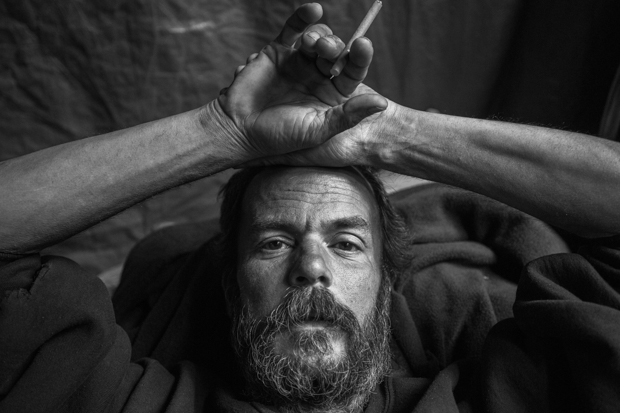 Bob Mulcahey (50) after his friend Drew, who overdosed on heroin, and died. Friends are always popping in and out of Bob’s life. The mills provide a transit point for many people who are homeless for one reason or another. But Bob has stayed for 3 years. 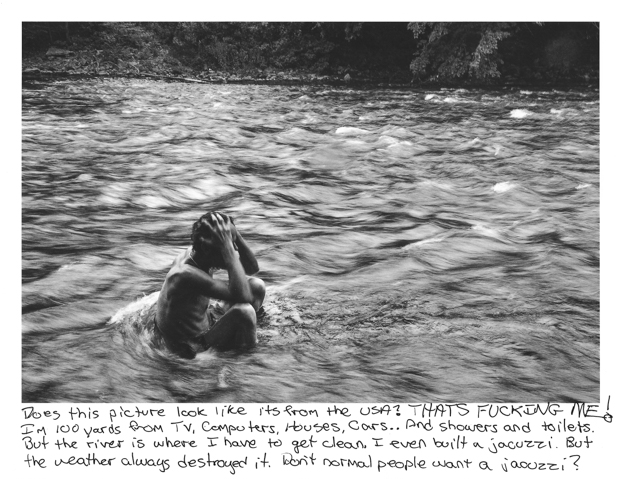 Bob bathing in the Passaic River that runs along the derelict mill that he lives in. Collaborative caption written by Bob. 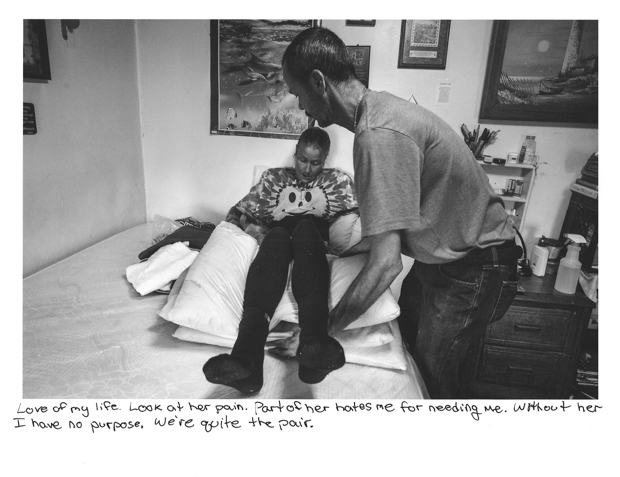 Bob helps his girlfriend Jackie, who suffers from a severe infection in her leg, into bed at her house near the mill where Bob lives. Bob dedicates several hours per day to caring for Jackie. Although Bob considers Jackie his girlfriend, Jackie does not feel the same way about Bob. Collaborative caption written by Bob.

Bob, an army veteran, has lived in the furnace of a derelict mill in Patterson, New Jersey, for three years. Other people reside in the mill with him, but for the most part, they’re just passing through. “They consider themselves the ‘forgotten ones,'” the photographer Todd R Darling says of the community. Bob’s friends have named him Mayor of the Mill.

Home of the Brave is a collaboration between Darling and Bob, who has written captions for some of the pictures. “Bob was honest with me from the beginning about what some of his challenges were,” Darling remembers. “I didn’t feel he was hiding anything from me.” Bob might have been wary of the photographer’s intentions at the start, but the fact that Darling kept returning to the mill, instead of taking pictures once and leaving forever, made him trustworthy.

Before its abandonment in the 1970s, Colt’s Manufacturing Company used this Patterson mill to produce revolvers. From there, it earned its place in history as a silk factory. In recent years, it has fallen into disrepair and now serves as a waystation for people in search of shelter. Living in the mill comes with a set of risks, including freezing in winter, being robbed or killed, and breathing asbestos and polluted air. Sadly, few of Bob’s friends have passed away over the years, and his own future remains uncertain. “He is as committed to telling this story as I am,” Darling writes. “I think he, like me, feels the system is failing.”

Bob, now 50, also sat down with Darling to share his life’s story. Bob joined the army in 1987 as a mechanic, the photographer reports, and after serving at Fort Hood, he returned to New Jersey to work at his father’s machine shop, which eventually closed. After losing his job, Bob was evicted in 2014. In 2017, when Darling began documenting his life, Bob was in the process of finding permanent housing through Veterans Affairs, but he was not able to secure a home for the winter.

For Darling, access to the veteran’s world has come at a price, and he now carries with him the knowledge of our country’s failings and the people we’ve left behind. In his own words, this understanding has made him “incredibly angry.” He tells me, “The first time I met Bob, I watched him climb into a hole that I couldn’t fit in, into that massive industrial furnace. He just disappeared. I was really upset by it. I’m upset now, thinking about him sleeping there.”

Still, he insists, Bob isn’t a victim. He finds work where and when he can, and he’s survived harsh winters, a hurricane, and periods of crippling depression. He feeds the wild animals who live along the Passaic River, and he’s nursed injured creatures back to health. “They even let him pet them and pick them up,” Darling adds.

Bob is also an avid reader and a devoted Yankees fan, and perhaps most importantly, he finds motivation in a woman named Jackie, whom he first met in the late 1980s. The two of them have dated, broken up, and reunited several times throughout the decades. Jackie has difficulty walking due to a leg infection and other health issues, and she is frequently in and out of the hospital. She currently lives in a boarding house close to the mill, and Bob continues to care for her daily. He helps her with everything from running errands to bathing.

And despite all the heartache and unpredictability of his life, Bob has formed a community amongst residents at the mill. “In the rejection [of society], they have found unity and love,” Darling insists. They organize a barbecue about once a week, and Darling has attended one of them. Bob has also found an unlikely confidante in Darling and an outlet in his photographs. “I watched the process ease some pain for him, and for me, that was the reward from this work,” the photographer admits. These days, he visits the mill not only in hopes of taking pictures. He also likes spending time with a man he’s come to consider a friend. “I think we get along pretty well,” Darling tells me, and in that sense, at least, Bob is no longer forgotten. 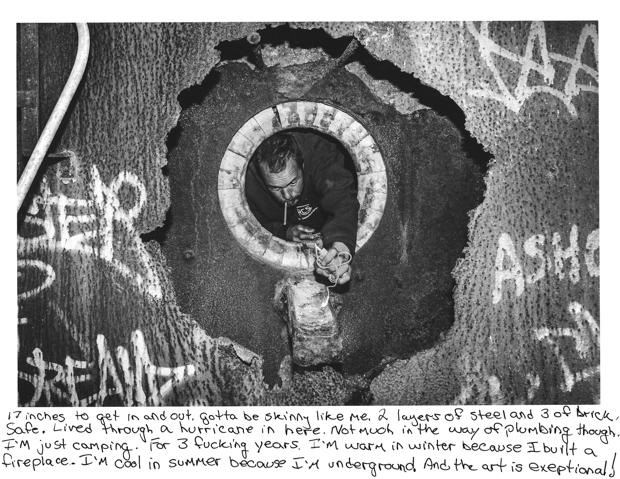 Bob climbing out of the furnace where he lives. Collaborative caption written by Bob. 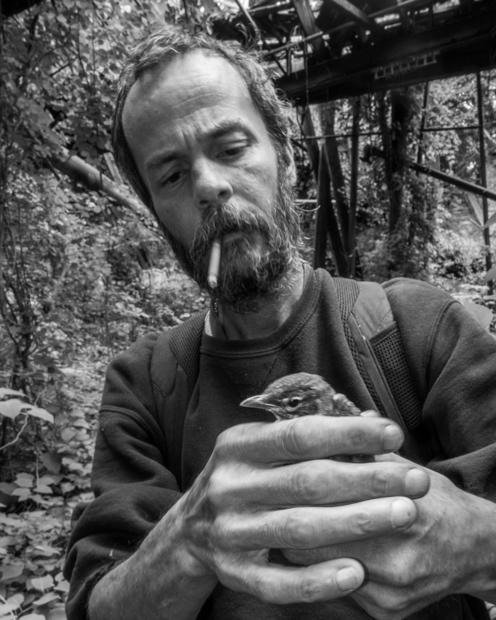 Bob cares for an injured bird he finds amongst the ruins of the Allied Textile Printing complex. Bob considers the wild animals who inhabit the mill with him to be his friends, including groundhogs and skunks. 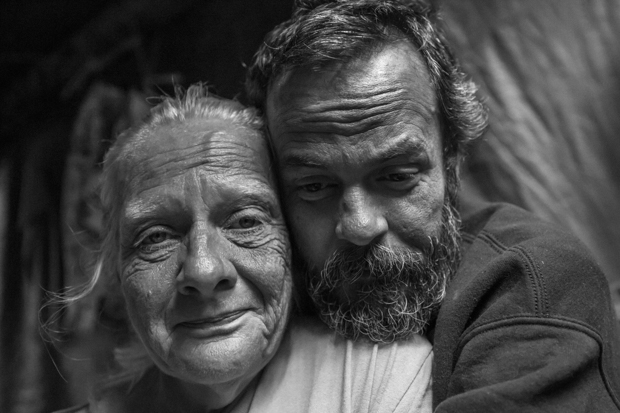 Bob and his friend Colleen a few days after Colleen’s boyfriend Drew, who overdosed on heroin, and died. Colleen has disappeared now. 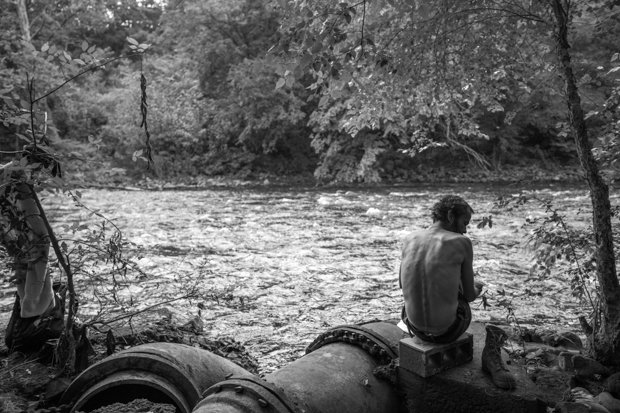 Bob gets dressed after bathing in the Passaic River that runs along the derelict mill that he lives in. 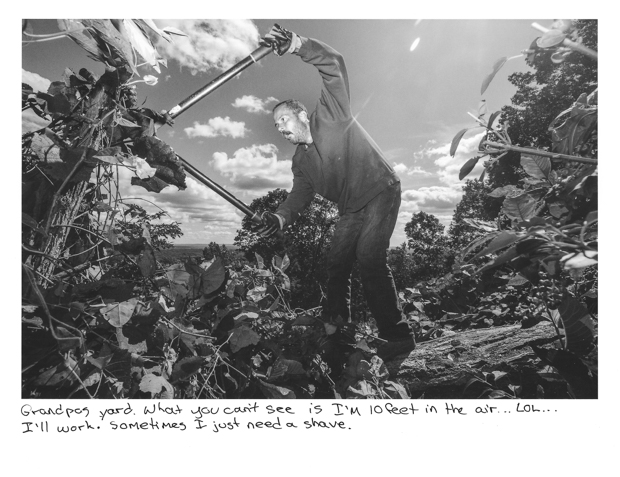 Bob cutting down over-growth vegetation on a mountainside in Haledon for his girlfriend’s grandparents. Bob relies on part-time work, such as landscaping and snow removal, as income. Collaborative text written by Bob. 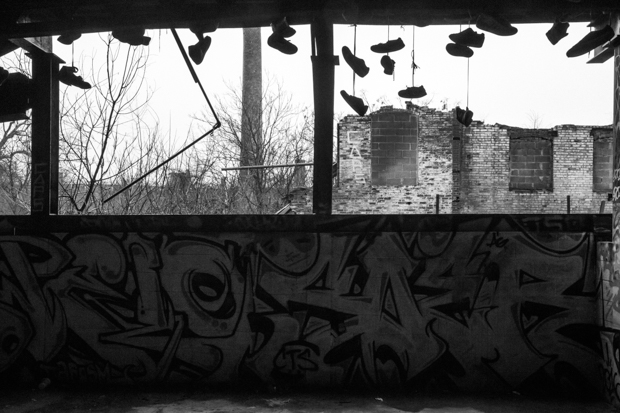 The ruins of the Allied Textile Printing complex. 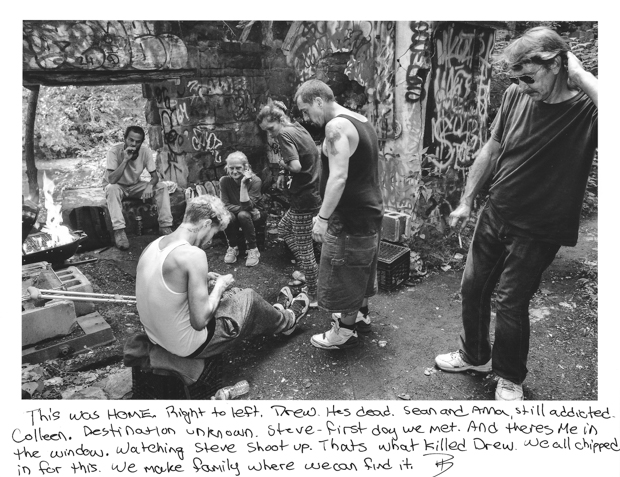 Bob and his friends who live with him at the the mill have a BBQ when they receive their food stamps. Collaborative caption written by Bob. 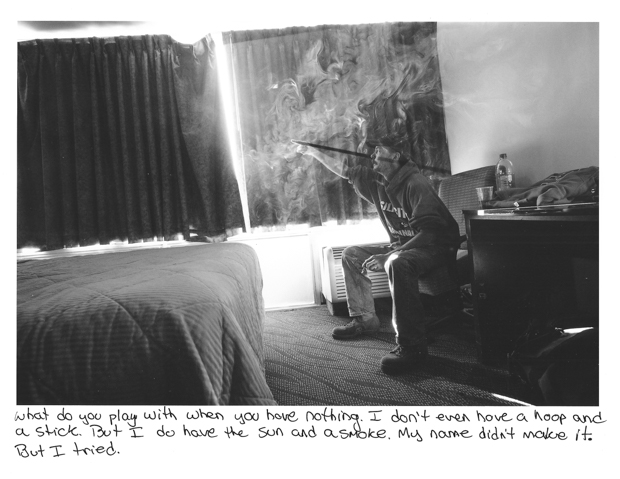 Bob smokes in his room of the Kings Inn, where Veterans Affairs has placed him temporarily while they address permanent housing for him. At the Inn, he is bored and isolated from his friends in Paterson at the abandoned mill. The housing is only temporary and may run out before a permanent solution is available and Bob may have to return to the furnace where he was living. Collaborative caption written by Bob. 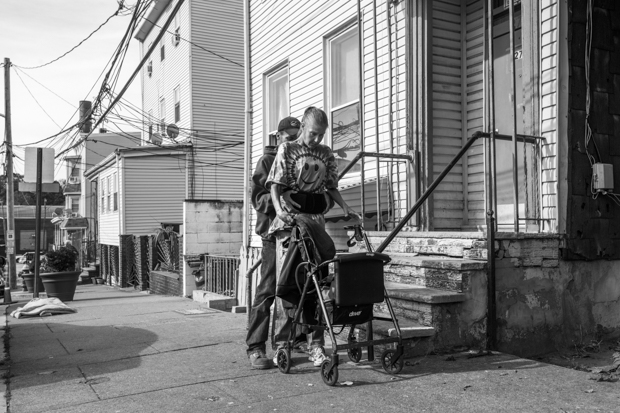 Bob helps his girlfriend Jackie out of the house she lives in near the mill where Bob lives. 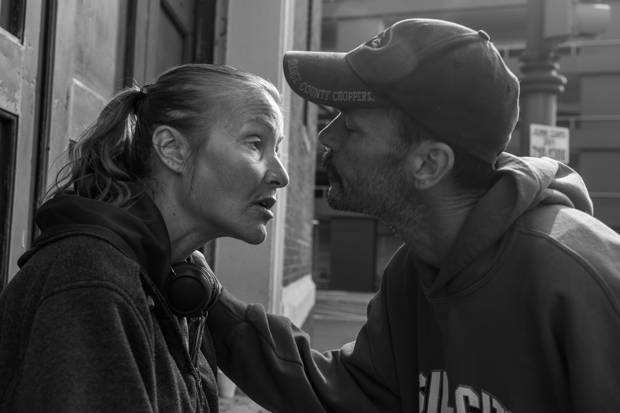 Bob leans in to kiss Jackie.