Unforgettable Photos from One of the World’s Last Matrilineal Societies 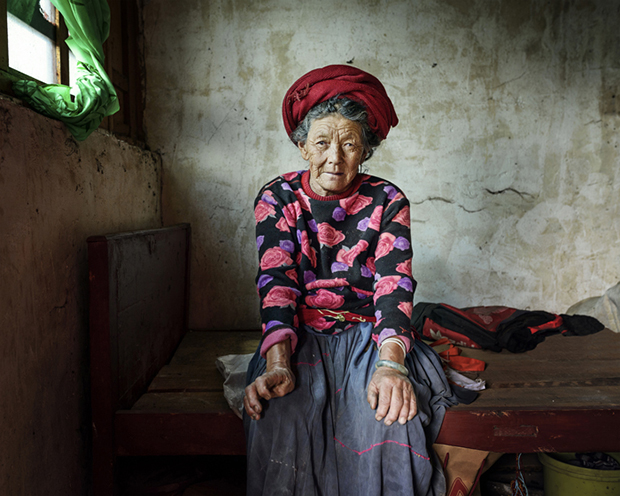 Pema Lamu (73) from the village Zhashi. Faces and hands of most Mosuo women are marked by the daily working hours in the fields. There is a clear division of labor between men and women. Women are responsible for household duties and farmwork and men for heavy labor and funerals. Usually, it is the Dabu who is working the hardest. 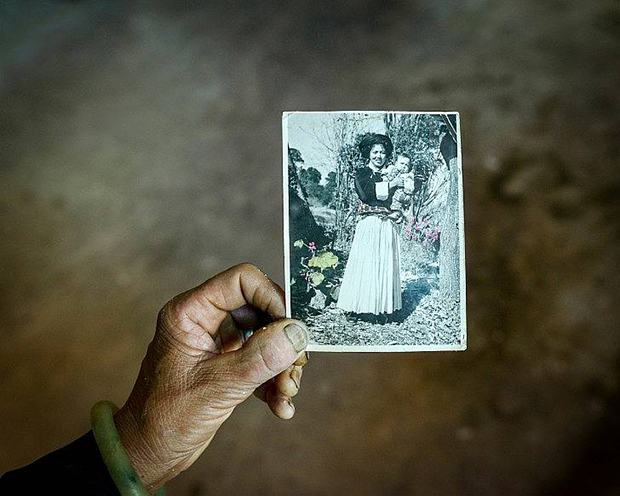 Du Zhi Ma holds a photograph in her hand, a portrait of her, which was taken about 35 years ago. In the photo, she carries one of her three children in her arms.

In order to get to China’s Lugu Lake, where the Mosuo people live, German photographer Karolin Klüppel traveled by road. That road, she says, has only been around for one or two decades. Before then, the area was relatively remote, sheltered from curious outsiders. Today, there’s not only a road but also an airport. Tourists arrive by plane a few times a week. Life is changing for the Mosuo, especially the women.

Lugu Lake has in recent years been dubbed “The Kingdom of Women” or “The Kingdom of Daughters,” and the Mosuo matrilineal society is part of what drew Klüppel. Traditional Mosuo families practice zuo hun (walking marriage, in English). The women select their partners, determine the family name, and have parental rights as well as property rights.

A Mosuo woman can keep or change partners at will, and the men are expected to call on the women at night. As The Guardian reported in 2010, there are no words in the language for “husband” or “father.” Children simply refer to the male figures in their lives as “uncle,” and they stay with their mother’s family for the duration of their lives.

Mosuo women control the family’s finances, and they assume the role of the heads of their households. Still, Klüppel stresses, women do not have much political pull, and the Daba religion, practiced by Mosuo for centuries, recognizes male priests.

In her time at Lugu Lake, Klüppel saw somewhere between two to three hundred households, covering as many as three villages in a single day. She traveled with a translator to bridge the language barrier, and in most houses, she shared tea and food with the families.

Throughout her journey, the photographer focused on the older Mosuo women, sometimes called Dabu. These individuals had in some ways lived multiple lifetimes: the years before the Cultural Revolution, the difficult 1960s and 1970s, and now, the age of the tourist influx.

“For these women, the Cultural Revolution was just horrible,” Klüppel tells me. “They were forced to give up their religion. They were even forced to marry, although it is against their Mosuo culture. The Chinese army burned their prayer books and took away their property.”

Although later years brought the freedom to follow their own societal guidelines, the Mosuo contended with poverty. Tourism has brought some economic wellbeing to families closest to the lake, but that security comes at a price. “They feel that their culture is fading,” Klüppel says of some of the women she met. There’s still pressure from the government to conform to the Han Chinese way of marriage.

The emotional and physical fortitude of the Dabu stunned the photographer. They are in charge of household chores and manual work involving the animals. In conversation with National Geographic, she admits, “I saw an 80-year-old women carrying things I could no way carry myself.”

In spite of all the labor of running a household, the Dabu do find rare moments of leisure. “In their free time, they like to sit together, talk, laugh and rest,” Klüppel says. “They also love picnics!”

The photographer can’t know what lies ahead for the Dabu. She was able to share her pictures during the trip, but she’s no longer in touch with the women. There’s simply no way for them to be in contact. She longs to return— perhaps next year, when she’ll be helping a filmmaker tell a story about matriarchal cultures.

In the meantime, Klüppel saw signs of the enduring spirit of the Mosou people, their history, and their culture. The Dabu won’t vanish without being seen and heard. The photographer’s own driver and translator, as it happens, brought everything he earned back home to his mother. She was still in charge. 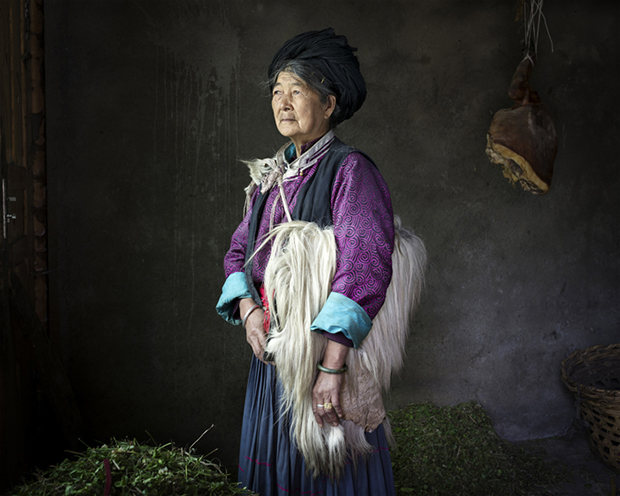 Asa Nuja (69) from the village Shankua: “I have two daughters and two sons. My daughters married in the Han-Chinese way and do not stay in my house. It was hard to accept their decisions, which are against our culture of the walking marriage.“ 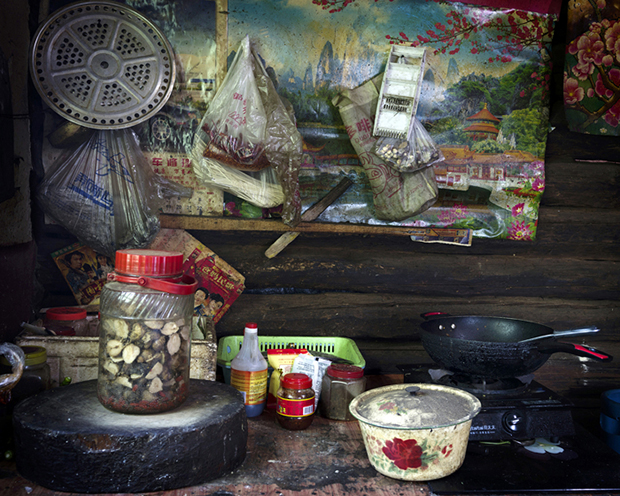 The kitchen of Sada Dorma. 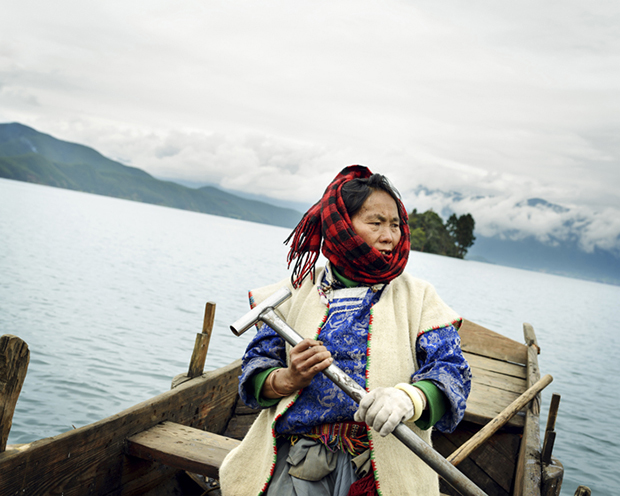 For the Mosuo, the old wooden boats are still an important means of transportation. There are no electric boats allowed on the lake, because they would pollute the water, which is of exceptional quality. 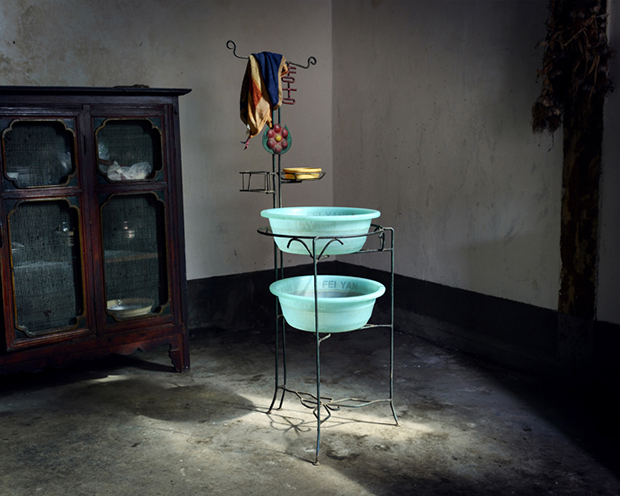 The washbasin of Du Zhi Ma’s family. There is still no running water in her house. 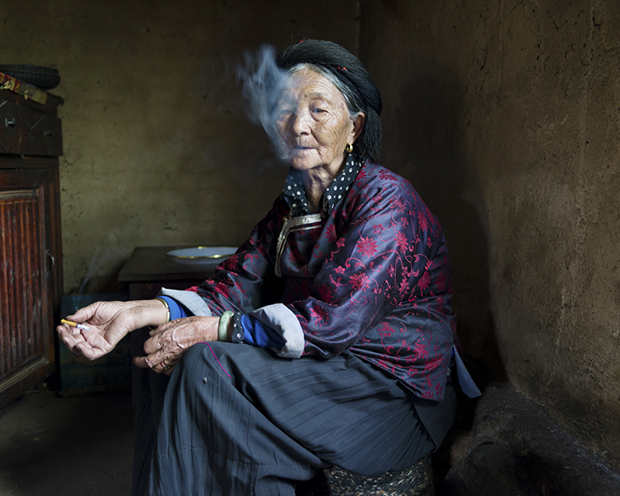 Sada Dorma (77) from the village Yixi: “Some years ago, many tourists came to our village Yixi because we have a beautiful cave to visit. But two years ago, the Chinese government built an airport just above the cave, which is too dangerous to enter now, and that’s why the tourism stopped here.“ 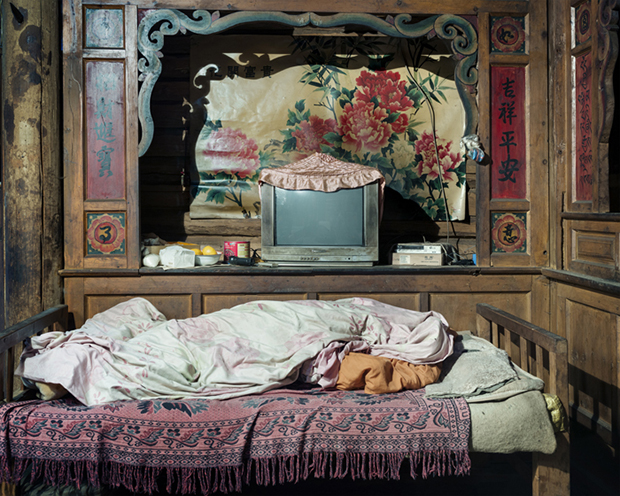 A traditional Mosuo bed near the fireplace. 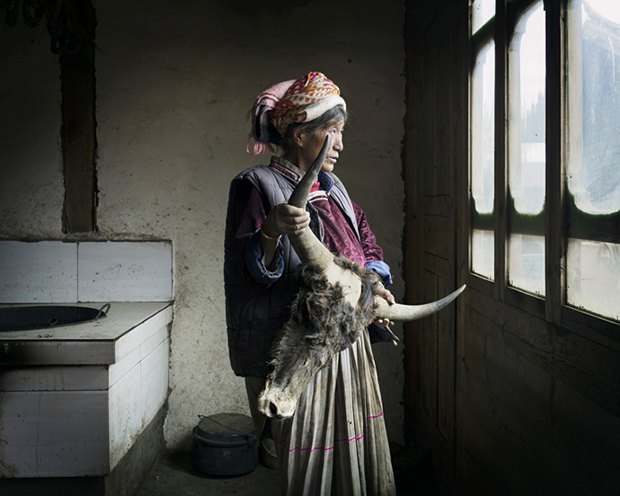 Asa Pure (67) from the village Shankua: “15 years ago, my sister and my brother also stayed with us, and we did not have to worry about money. But then, my husband died, and my brother and sister moved away. Nowadays, it is very hard for us. We were so rich in my childhood days, but today, everything is just hard.” 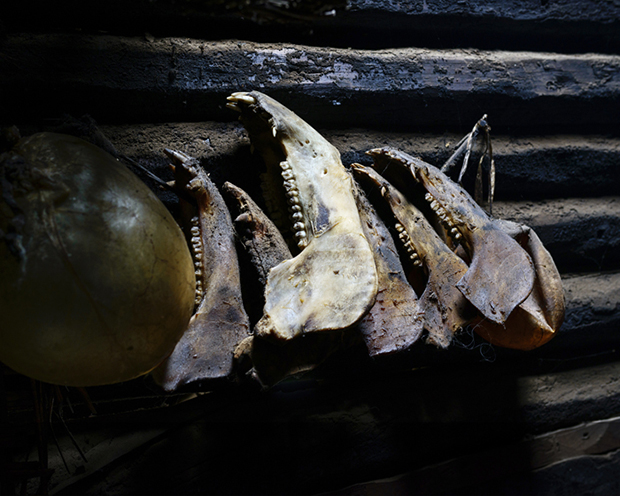 Several pig jaws hanging over the front door. The Mosuo are known for their preserved pork, which is kept for more than 10 years and can be used as needed.