20 Years of Protest in NYC, in Photos 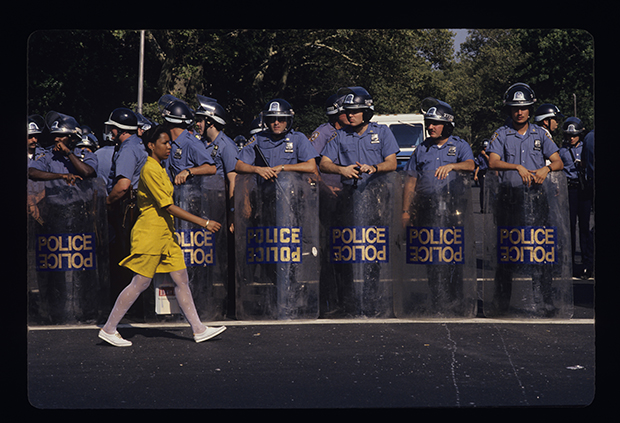 Brooklyn, 1991. A woman walks by a line of police during the Crown Heights race riots in Brooklyn. This was a three-day racial riot that occurred from August 19th to 21st and pitted African American and Caribbean Americans against Jewish residents. © Mark Peterson 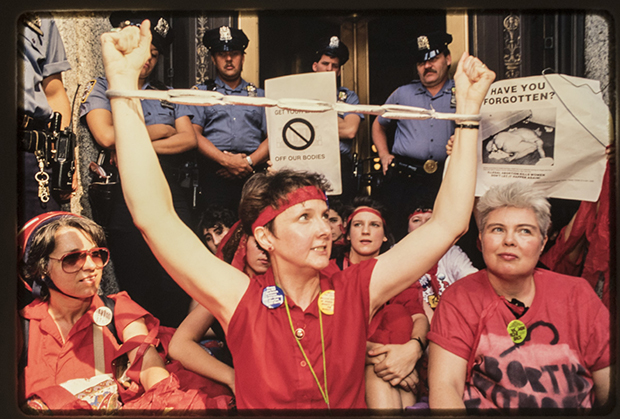 Pro-choice demonstrators in downtown Manhattan protest the July 3rd, 1989 Supreme Court Webster decision which limited Roe V Wade. This was a turning point in the pro-choice movement. 24 were arrested, including activist Mary Lou Greenberg, as they stormed the Brooklyn Bridge. © Nina Berman / NOOR

When photo editor Meg Handler and historian Tamar Carroll first started talks in 2014 about what would later become the exhibition Whose Streets? Our Streets! at the Bronx Documentary Center, Donald Trump had not yet announced his bid for President of the United States. Eric Garner, Sandra Bland, Freddie Gray, and Alton Sterling were all still alive. The Black Lives Matter movement was in its infancy.

In the intervening years between the inception of the project and the opening of ‘Whose Streets? Our Streets!’ New York City: 1980-2000, the work of the 38 participating photojournalists took on new meaning. The pictures they made of peaceful protests, riots, and demonstrations are no longer pieces of historical evidence; they’re roadmaps to our present and our future.

The protests included in the exhibition centered around reproductive rights, LGBT rights, gentrification, police brutality, a lack of affordable housing, public education, the destruction of the environment, and censorship— all of which are once again playing out in our political and personal lives.

What’s different about the protest photographs of today— Jonathan Bachman’s photograph of Iesha L Evans facing the troopers in Baton Rouge, for instance— is that we see them instantly. For the most part, the pictures in Whose Streets? Our Streets! couldn’t be uploaded and shared with millions; they remained on film and contact sheets until at last they could be revisited and shown to the public.

In this way, it can be said that these photographs are especially personal to the people who made them. These photographers have sat with these pictures for years, and they don’t have the luxury of being detached from the people they encountered and the issues that mattered to them. In fact, they don’t even have the opportunity to feel wistful or nostalgic; the strife of today is too acute a reminder that things don’t change so easily.

If the past three years had played out differently, perhaps the exhibition could have been merely a historical document. Perhaps not. Either way, given current events, the collection can’t help but stand as an act of protest in and of itself. 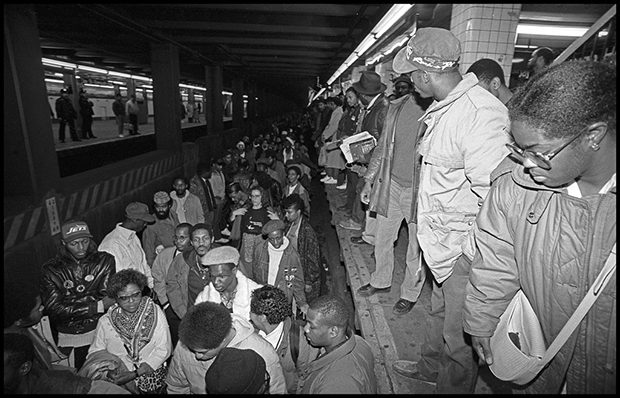 Day of Outrage demonstration at the Jay Street-Borough Hall subway station following the Howard Beach verdict on December 21, 1987, in which three defendants were found guilty of manslaughter in the death of Michael Griffith, who was beaten and chased by a white mob onto a highway, where he was struck by a car. © Ricky Flores 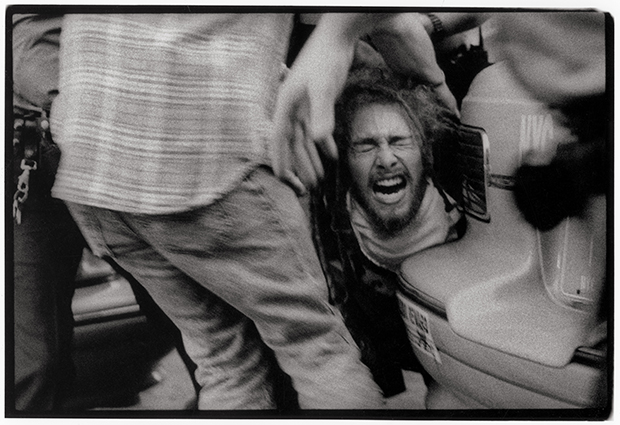 A man protests the death sentence handed down against Mumia Abu Jamal, who was convicted of killing a Philadelphia police officer. © Sylvia Plachy 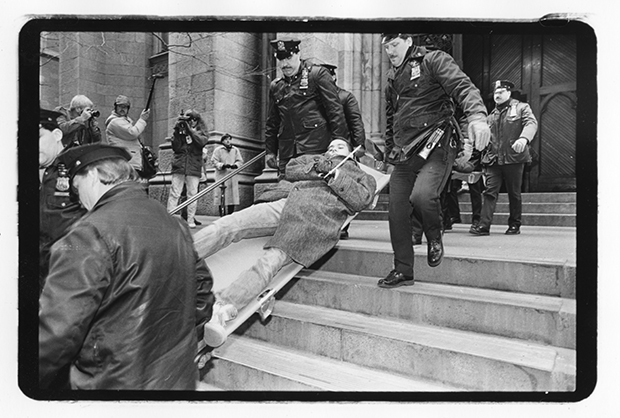 A protester is carried away during an ACT-UP Stop the Church direct action at St. Patrick’s Cathedral on December 10th, 1989. © Brian Palmer 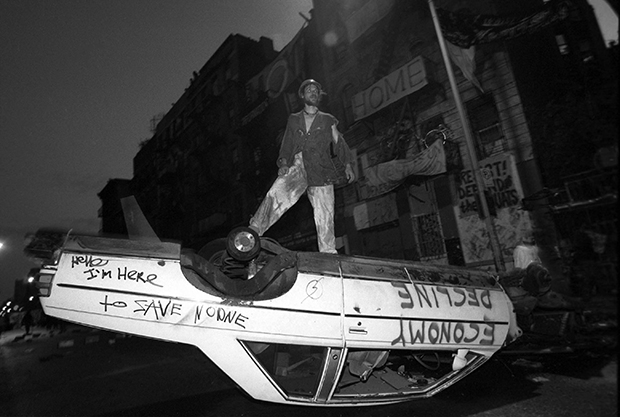 Squatters attempt to defend their building by blocking the street with overturned cars and trash before an expected attack by the police on East 13th Street. © Andrew Lichtenstein 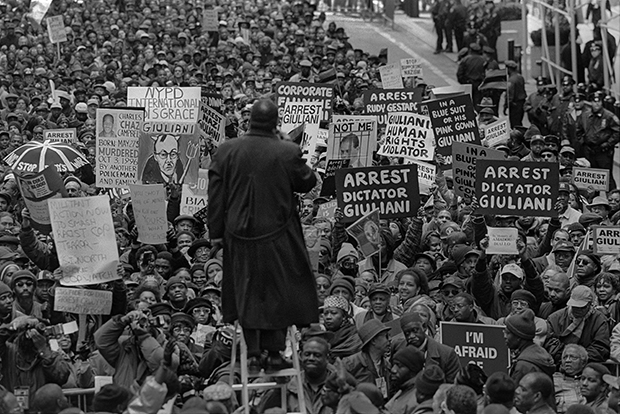 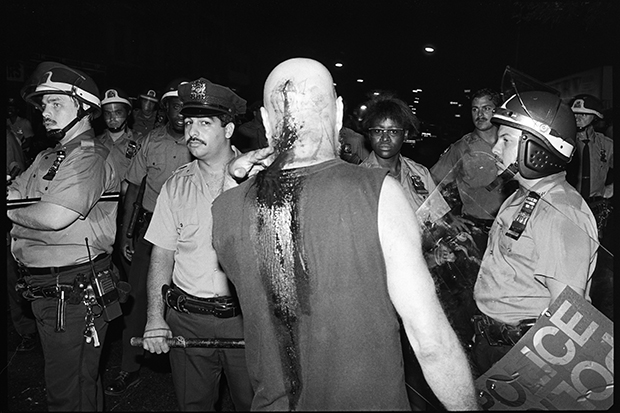 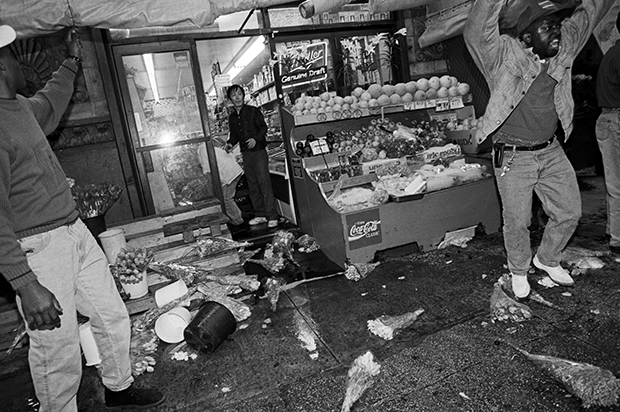 NYC protesters take to the streets in response to the acquittal of the officers involved in the beating of Rodney King. Some Asian-owned groceries, such as this one, were vandalized. April 1992. © Linda Rosier 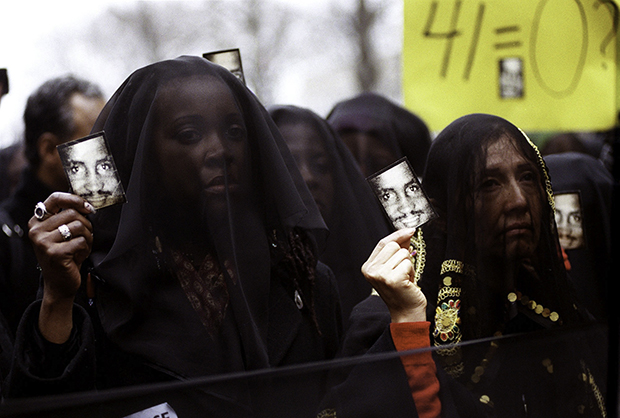 A group called “Women in Mourning and Outrage” hold up photographs of Amadou Diallo during a rally in front of the United Nations. The rally was held after the acquittal of four New York City police officers involved in the shooting of Mr. Diallo, who was unarmed. February 27, 2000. © Ricky Flores