Exposing the Shantytowns of America’s Homeless 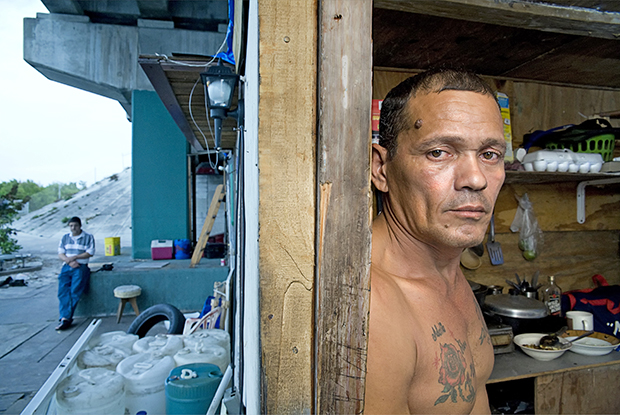 Eddy and the New Guy
MIAMI, FLORIDA / JULIA TUTTLE CAUSEWAY, BOOKVILLE, PAROLED SEX OFFENDER CAMP. In Miami, Florida laws were passed making it impossible for paroled sex offenders to move home with their families. They were required to wear leg monitors and sleep under a bridge each night or they would violate their parole. Released convicts were dropped off at the encampment without so much as a sleeping bag. Older residents like Eddy on the right would sometimes help out the new arrivals. Eddy has a three room wooden shanty that includes a bathroom with a toilet that flushes into the bay. 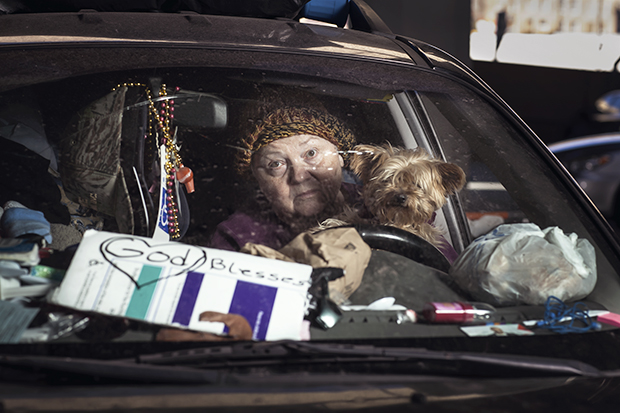 Carol and Molly’s Van
NEW ORLEANS, LOUISIANA / RESCUE MISSION CAMP Carol lived in a van with her dog Molly. She drove to New Orleans from Iowa with the hope of a milder winter. The vehicle was full of her belongings and there was no space to sleep unless she removed her valuables.. Her days were spent in a small cramped area at the steering wheel. When the temperature dropped below freezing she refused to go to a shelter because dogs were not welcome there.

Structure out of Chaos is the name given to New Orleans-based photographer Mary Lou Uttermohlen’s ongoing documentary project observing homeless people in the United States, who organize their lives by building shantytowns. As authorities strive to wipe away these communities, police conduct regular sweeps which plunge residents back into chaos. While this vicious cycle continues, Uttermohlen aims with her project to open an informed dialogue on the issues of chronic homelessness in the US and beyond.

What motivated you to start this series and where did you go to take the photographs?
“The series began in 1993 when I moved to Miami, Florida.  At the time the city was being sued for arresting homeless people prior to public events. During the federal court case a judge ruled that “safe zones” must be established where people could eat, sleep and bath in public without fear of arrest until services could be offered to them.

“As a result, shantytowns sprung up all over Miami and across the country. In Miami they estimated the population in shantytowns to be 1,200 people.  I visited a lot of different camps, but frequented about three on a regular basis. Some were so dangerous that I avoid them completely.”

Did you find most people were willing to be photographed?
“No, people are not that eager to be photographed. No one wants to be memorialized in his weakest moment. Nor do they want make waves politically for a social service community that they depend on for food and necessities. People would rather stay under the radar than to be photographed. Shantytowns are also havens for people hiding from the law and they are also the source of refuse for people with mental health and substance abuse issues. For these reasons, outsiders can be seen as a threat. In order to make portraits I had to build relationships and abide by the requests of the community. My images became a portrait series as I was avoiding the people who did not want to be involved.” 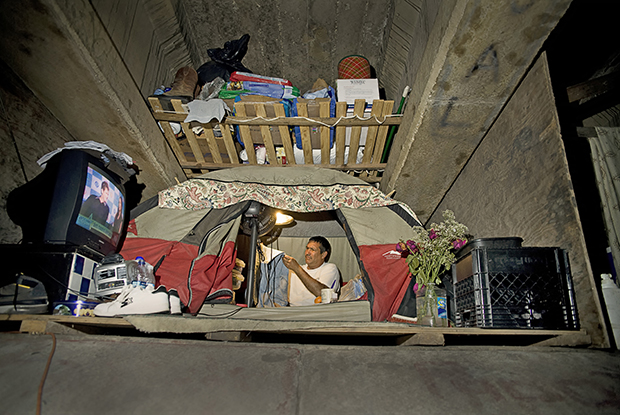 Centano’s Tent
MIAMI, FLORIDA / JULIA TUTTLE CAUSEWAY, BOOKVILLE, PAROLED SEX OFFENDER CAMP. Centano gets ready for bed under the causeway bridge. Since this project began the look of the camps have shifted. In the past homeless people built shanties with wood and electricity was acquired by rewiring streetlights. Now more homeless people are living in tents because it is cheap and easy to move quickly. Here in the Bookville camp residents bought and shared generators for power. Theft was less of an issue because people already feared the camp. It was in the resident’s best interest to take care of the generators and each other.

What has been the most problematic thing about working on this project?
“My safety is always in question. I am a woman alone with expensive equipment requesting to enter people’s homes that usually do not know very well. In a perfect world, I would always have a photo assistant but that is usually impractical. The other challenge to this documentary is getting people’s attention in order to share these images. The subject of homelessness tends to get a lot of projections and people form opinions based on emotional stereotypes that may have nothing to do with actual reality of this story.” 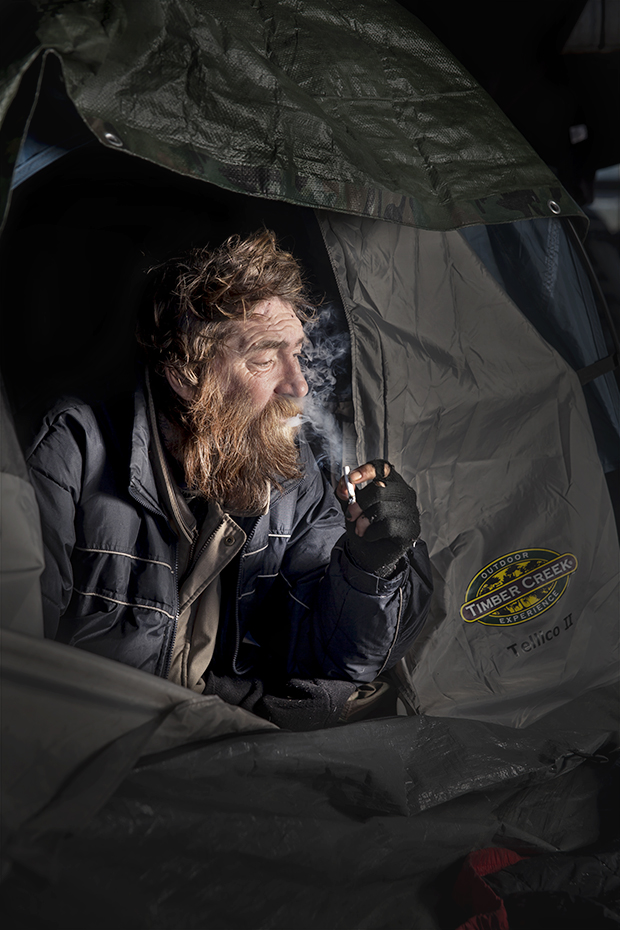 Jeffrey
NEW ORLEANS, LOUISIANA / CLAIBORNE CAMP?For Christmas a Good Samaritan showed up with a van full of tents for the New Orleans homeless. However the city considers these homes an eyesore. If camps don’t disband prior to a sweep then authorities will confiscate and discard all personal property leaving the homeless with nothing. Social services are sometimes offered prior to a sweep. The need for services is usually larger than the available resources. 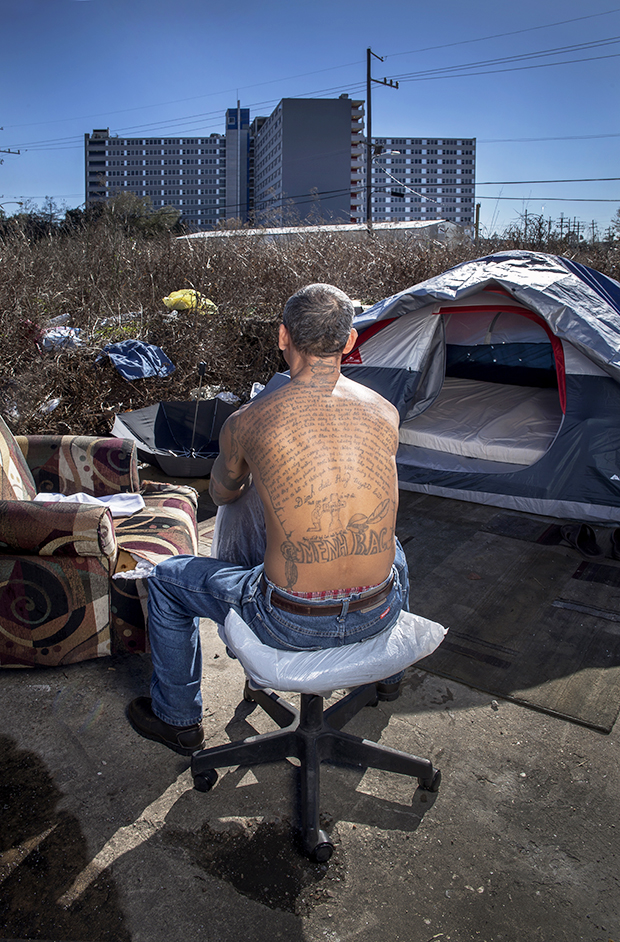 Lee’s Tattoo
NEW ORLEANS, LOUISIANA / CALLIOPE CAMP. Lee proudly shows off the tattoos that tells his life story as an Amerasian from Vietnam to American homelessness. 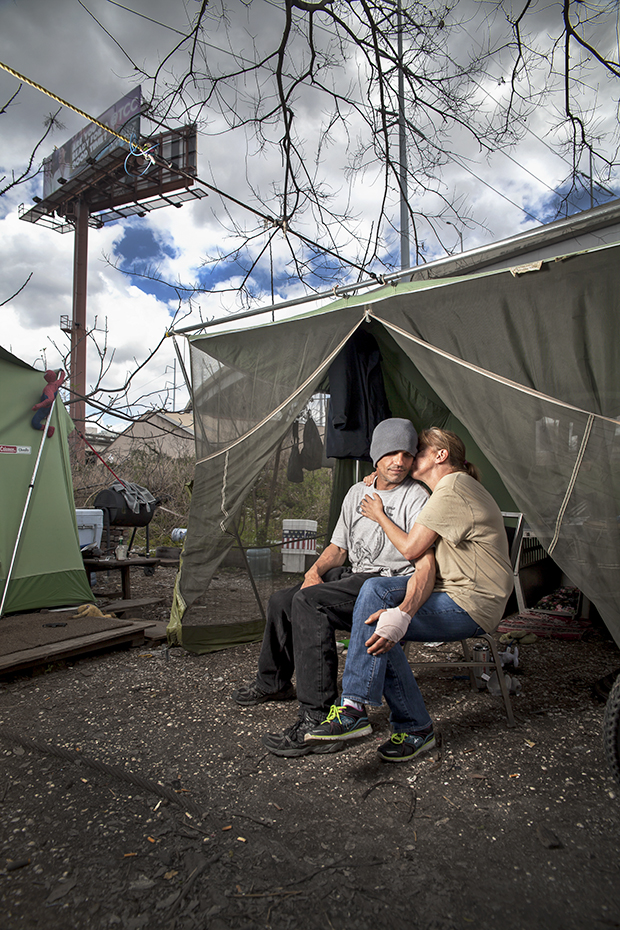 Lovers Freddie and Olima
NEW ORLEANS, LOUISIANA / SUPERDOME CAMP. Freddie works next door to the camp where he lives. His boss gives them electricity, water and pays a below minimum wage salary. When speaking with the boss one day his eyes teared up with concern for the people. He said the question he often asked himself was “What would Jesus do?” 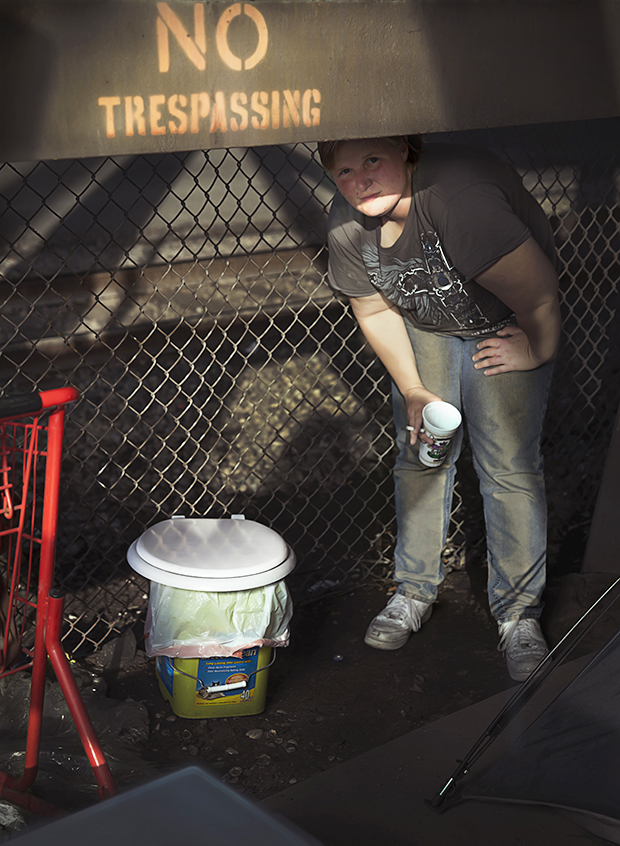 Phoenix in the Ladies Room
NEW ORLEANS, LOUISIANA / CLAIBORNE CAMP. One advantage of having a camp is being able to set up a human waste system. In this encampment the ladies room was inches from the railroad tracks. Phoenix shows off her toilet saying that the men give her privacy but she needs to be aware of the Amtrack schedule. A few weeks latter they rebuilt the bathroom with tarps for more privacy. The bucket was dumped into a storm drain.

What inspired the project’s title Structure Out of Chaos?
“When homeless people build their own shelter and organize into communities they tend to stabilize themselves. They appoint leaders they tend to refer to as the mayor and they chase off troublemakers. They segregate along lines of common interest. Women, children and families will stick together. The alcoholics don’t usually like camping near drug addicts. In general, the strong take care of the weak. When they set down roots you know how and where to find them. Out of the chaos, order always manifests. They plan meals, they find water, they set up a bathroom and a way to cook. The problems of survival get resolved as a community. So not only are their buildings a structure, but so is the social network that is formed.”

Lastly, is the project complete or ongoing??
“The project is ongoing. I have always seen it as a national story and I have been trying to figure out how to fund the completion of the series. Homeless shantytowns have been growing across the United States in the past 25 years.  It is important to illustrate that this is not confined to any one city or region and as long as our society is unconscious of this epidemic, it will continue to grow.”

Mary Lou Uttermohlen was selected by Photolucida as a Critical Mass Top 50 2016 Photographer.