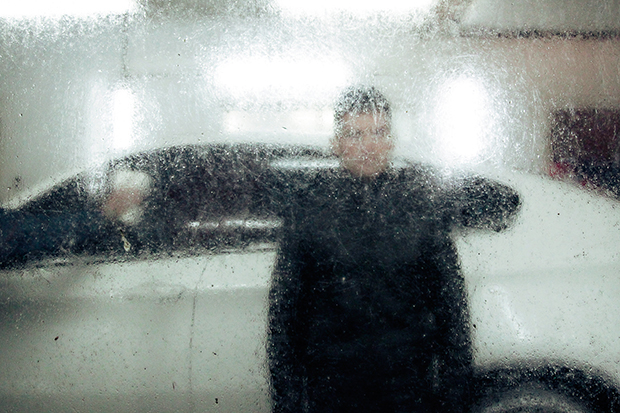 Faridun works at a car wash outside Moscow. In January, his wife gave birth to a baby girl. When he next sees her, she will be 18 months old. 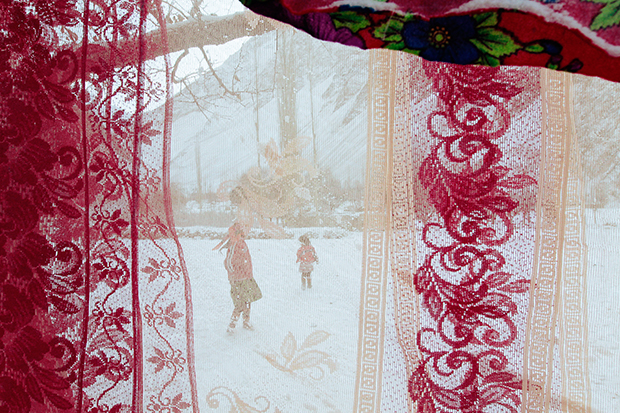 The Bartang Valley in Pamir, one of Tajikistan’s most isolated regions. In winter, snowfall cuts the region off from the rest of the world.

When Saint Petersburg-based photographer Ksenia Diodorava talks about the migration of people, she uses the analogy of water. It’s ubiquitous, necessary, beautiful, it has a source, but there are many rivers and some flood their banks — and flowing they become lost to the sea.

In the Cold is Ksenia Diodorava’s two-sided story about 24 families, both in Russia and their native Tajikistan. “In Russia, it is a commonly held belief that immigration strangles our cities, our schools, our subway cars. Immigration is a flood we are drowning in” says the photographer. Saddened by the discrimination aimed at labour migrants from Central Asia, the artist decided to tell the stories of those families separated by the process of migration — her objective was to show that beyond the mass statistics were individuals with feelings and experiences not too dissimilar to our own. In order to fully convey the gravity of their situation, she resolved to show the “other Tajik”. “In truth, the flood is not where these people go, but where they come from”, she emphasizes.

“Each human being is blood and soil, their family and their home. Also, there is nature — cold and warmth” says Ksenia. It was of paramount importance for her to go to the source of this migration to understand why so many people left the land that had shaped their cultural identities. Following the civil war in Tajikistan (1992-1997) and the country’s economic crisis, many Tajiks migrated to Russia to improve their chances of survival. The artist traced their stories from the early beginnings, the original kishlaks, the rural settlements where the people where they were born to the Russian cities where many migrants now live.

In January 2014 Ksenia first visited Tajikistan and stayed in the remote Pamir mountains for one month, photographing the Bartang Valley and its people in the mountainous Gorno-Badakhshan province. What she found there was unsettling — a country in a state of disintegration that was quickly running out of vital resources such as electricity, coal and gas, without which there were no factories — which inevitably meant no jobs. Those “lucky” few that find employment earn a average stipend of 200 USD, even if well-educated.

Upon returning to Russia she began to search for the children and close relatives of her subjects from Pamir. She found them working in various Russian cities, earning a meagre salary that is spent supporting relatives in Tajikistan. Their living conditions are poor and they struggle in a lawless, aggressive social climate — “you encounter intolerance towards migrants everywhere — in the subway, in the bus, buying milk”.

The photographer spent around 9 months working on this series between the two countries, capturing aspects of the culture, traditions and the conditions in which migrants are living. After having been separated for years, family members meet each other on the spreads of the photo book In the Cold and the corresponding online documentary.

“Migration is like a great stormy sea that swallows up more and more people. People caught in this flow become similar, faceless” says artist. In the melting pot of big cities these people are perceived as part of the same tribe; they lose their individual attributes and blend into one another. Ksenia hopes that In the Cold will raise awareness of the plight of these forgotten migrants so that they might be granted more social and financial support in their new home. 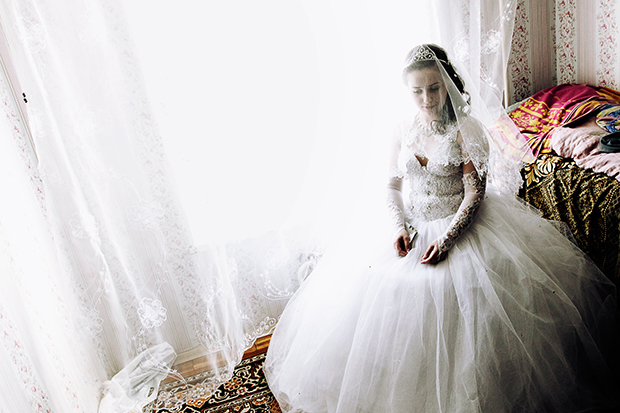 Khairulo and Baskhotun live in Khuchez. Their son, Mirfaroz, has lived in Russia for seven years and works on a construction site. In April, he married his fiancee Fazila (pictured). His mother traveled all the way to Moscow for the wedding. 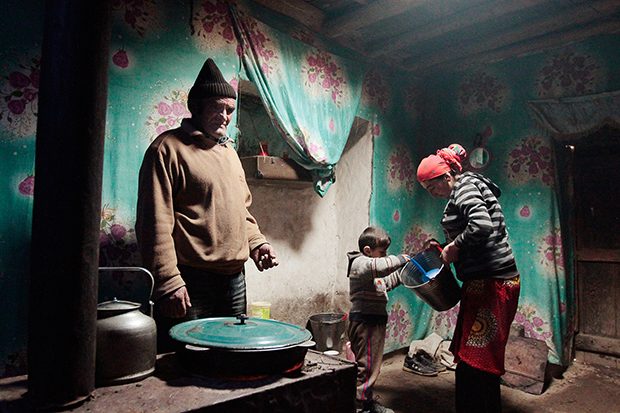 In Roshorv, Dzhuma works in Russia so his brother can study at a technical school specialising in economics. 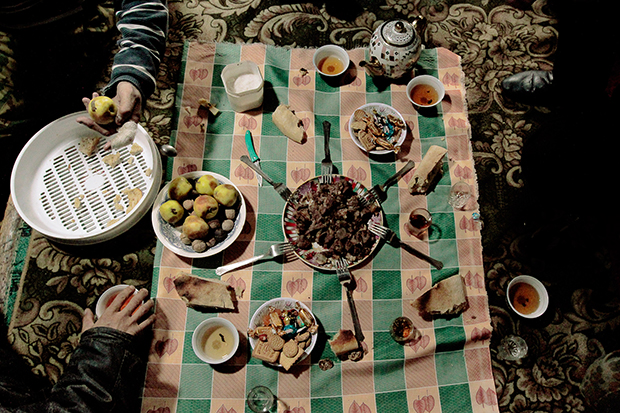 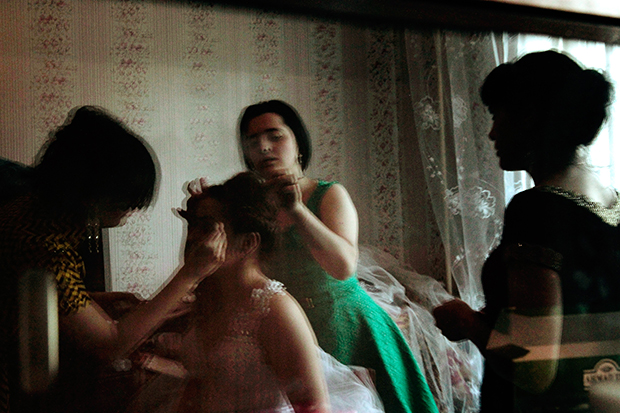 “A woman, a girl, even if she is smarter, even if she is wiser than her husband, must at least pretend that she is weak and dependent. That is wisdom. Such women should be respected. Then life will be good”.  -Mirfaroz 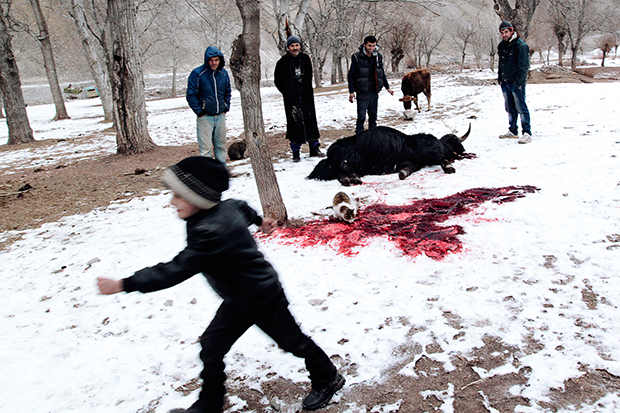 “The Bartang valley is situated 3,000 meters above sea level. Outside the region’s capital, the asphalt road ends. Only stones, ice and snow remain. Buses do not run and people are used to walking here. I know a man who walked to high school 18 km in each direction, every day” – Ksenia 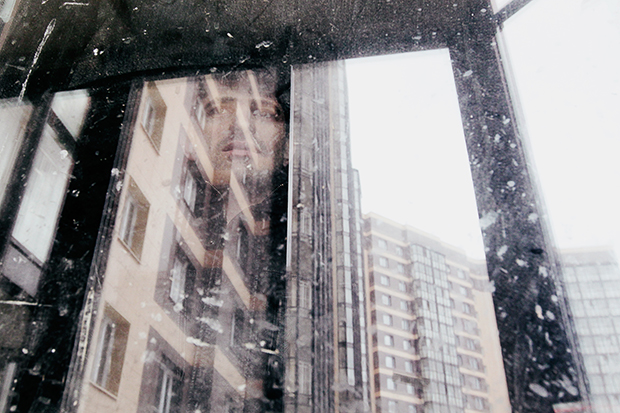 Mirfaroz announced in March that he planned to get married in Moscow and promised to bring his family over for the wedding. 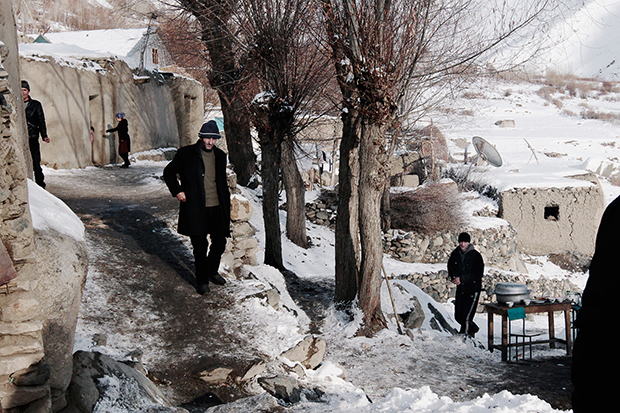 “If I would put much thought into it and everything was my way, I would turn our whole globe into a flower garden. But unfortunately not everything that we are up to can come out”. -Kholik Nazar 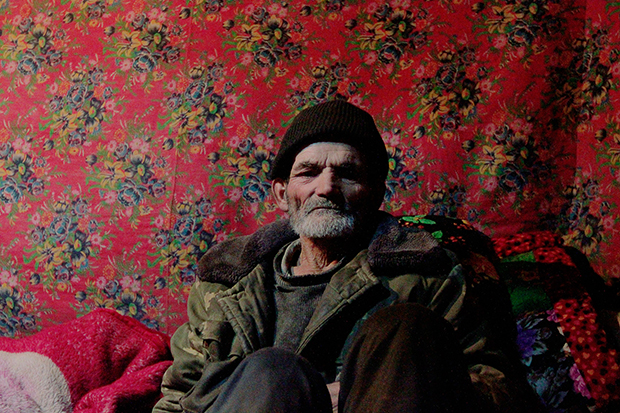 “When I arrived at Faridun’s house, all of the women were knitting jurabs. His brother who had just came from Moscow was asleep. I often saw men sleeping during the day in Pamir. It always meant that the person has just come back from Moscow. He will be sleeping for weeks or months before returning to Moscow. Faridun’s wife gave birth to a daughter in January. When he sees her next time she will already be one and a half. Faridun works at a carwash in Moscow”. -Ksenia 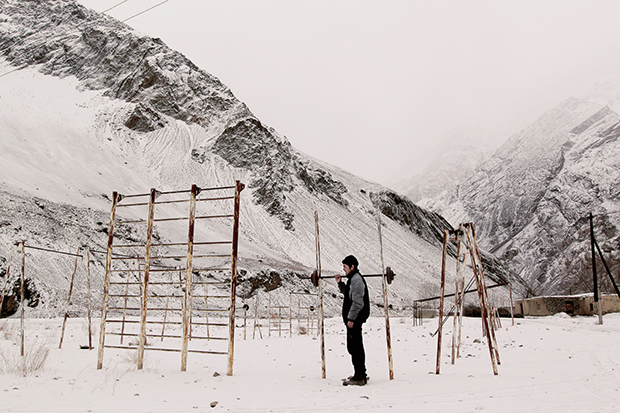 An open-air ‘gym’ in the Bartang valley. 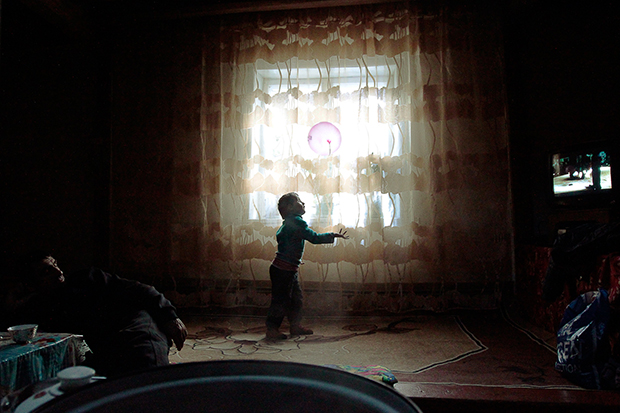 “When I go out of the house, I see a pink jacket disappearing among the thin-sown trees and withered ground.  Jasmina loves to make long, slow steps forward. She loves balloons.  Jasmina is six years old. She lives with her grandmother. Her parents have been in Moscow for a long time.  Jasmina hasn’t seen them for three years. Sarfia, Jasmina’s mother, works in a café”.