This Is What Former Gang Members Would Look Like Without Tattoos 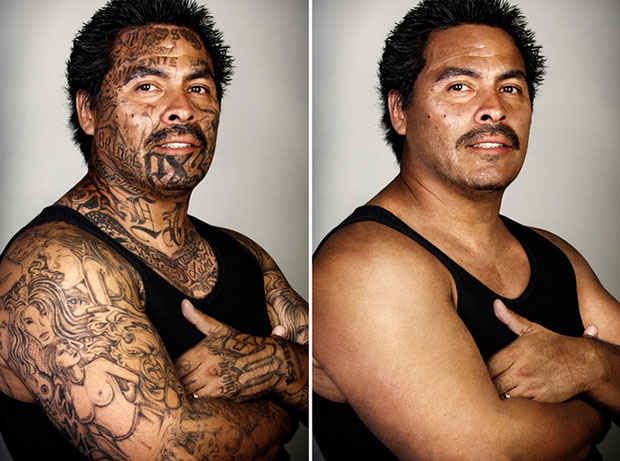 Please support the book Skin Deep go to @stevenburtonphotography and click to link.

When Steven Burton shows former gang members Photoshopped pictures of themselves without tattoos, some laugh, and some cry. Most tell him they want to show the photographs to their mothers.

The seedlings for what would later become Skin Deep were planted when Burton saw G-Dog, a documentary film about a Priest named Greg Boyle and his organization Homeboy Industries, a safe haven in the middle of Downtown LA for former gang members striving for a better life. At Homeboy Industries, men and women receive counseling, job training, and even tattoo removal services.

At the time of the 2012 documentary, Burton’s studio was just ten minutes from Homeboy Industries.

The idea of photographing the homeboys and homegirls was a delicate one—these are people who are overcoming the trauma of their past and building towards a real future— but the promise of a “before and after” series, with and without the tattoos, intrigued them. After all, many planned on going through the painful process of actually removing their tattoos in the near future.

Over time, the photographer earned the trust of Father Boyle and four homeboys who agreed to sit for portraits. From there, more people wanted to participate and share their stories.

The digital removal of tattoos could require up to twenty hours per face, but after Burton was done, he brought the photographs to show his subjects.

Responses ranged from “I don’t know what to say” to “This is art right here.” Of course, many wished they could show their moms. They wondered what life could have been without the ink and all it stood for, and what life might be once it’s gone.

In one interview, a man pointed at his own face, clear of any tattoos, and said simply, “This is a human being.”

Former gang members face an uphill battle not only in their own route to rehabilitation but also in the attitudes of the public. Burton’s subjects were frequently ignored or feared while going about their day-to-day activities. Stigma and prejudice followed with the tattoos.

Of all the conversations the homeboys and girls had with Burton, it’s clear that one line left a profound impression. A man named Calvin told him, looking at his tattoo-free portrait, “That was the beginning of my life.” He felt as though the picture had turned back time, given him another chance.

The Skin Deep photos are about resilience and redemption, but Burton understands that the path towards a happy life is never easy. He’s lost touch with some of his subjects and knows a couple must have fallen back into the brutal cycle of gang life. For these men and their families, a future is sadly not guaranteed, but it’s always hard-won.

Perhaps for a few of these men, these photographs represent a promise that will never be fulfilled, but for most, they mark the start of something new. In real life, many of these tattoos will be removed, and their bearers will be set free. Those who have passed away will be remembered.

Burton is currently raising the funds to publish Skin Deep through powerHouse books. The book will include the portraits, interviews with the photographer, and a foreword by Greg Boyle. A portion of the proceeds from the sale of the book will go directly towards Homeboy Industries, the place where it all began. 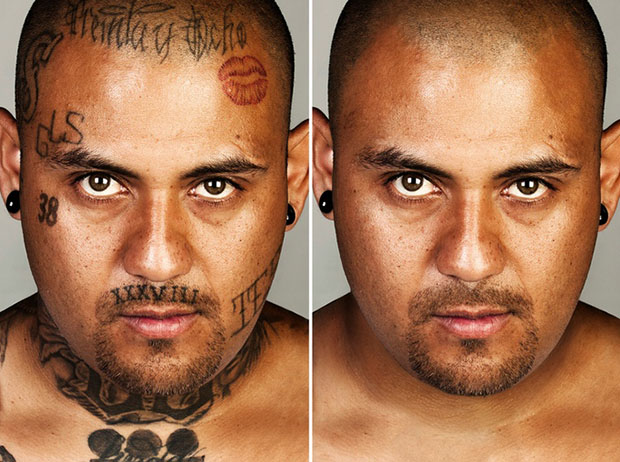 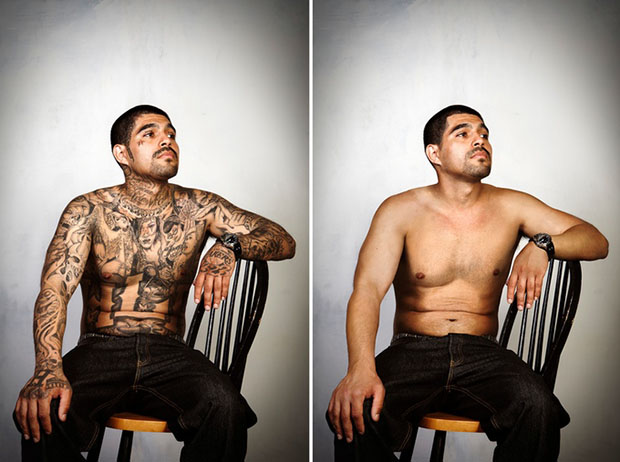 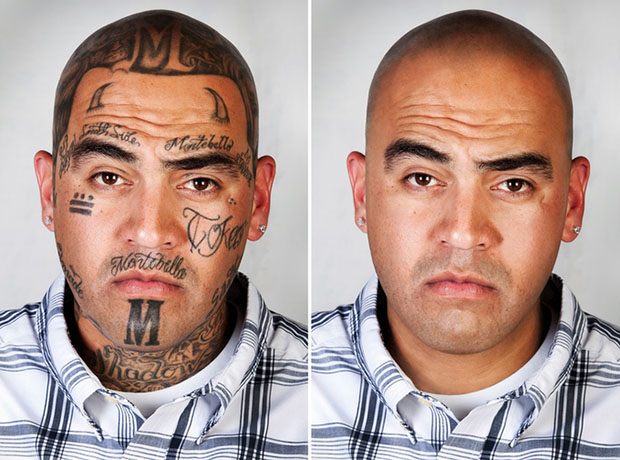 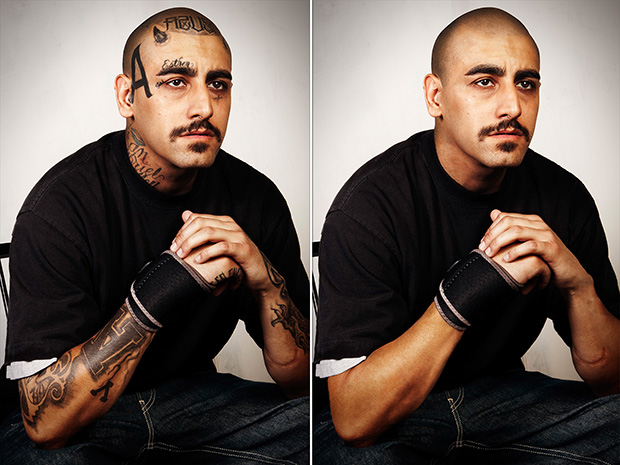 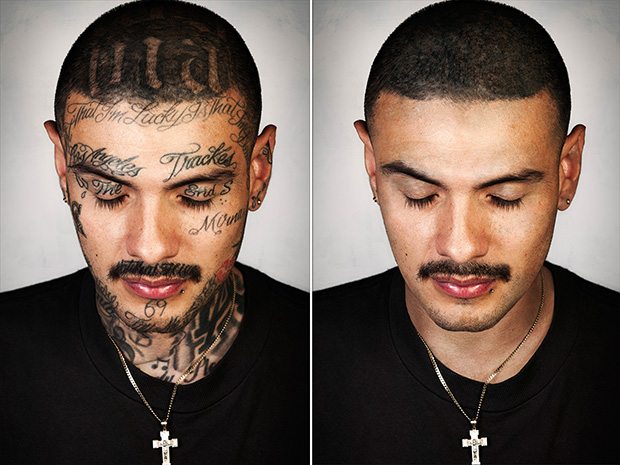 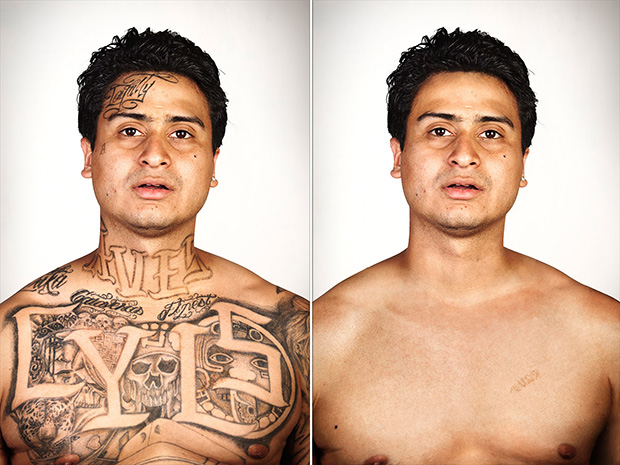 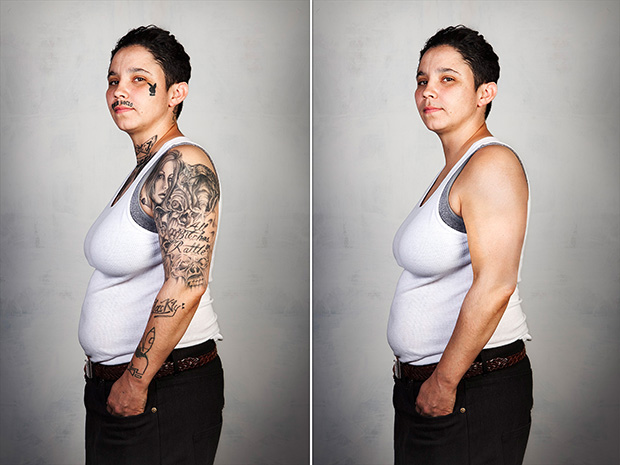 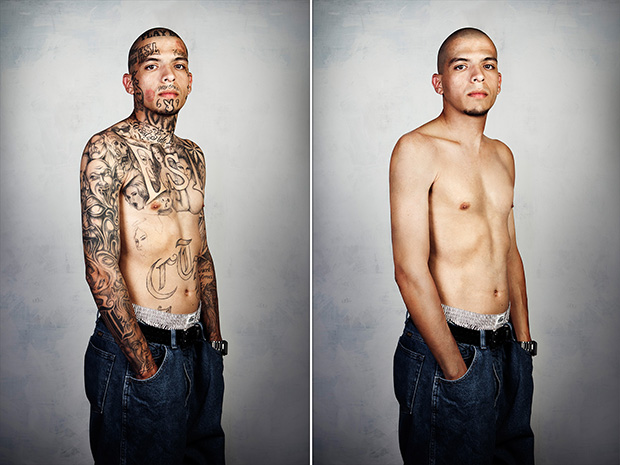 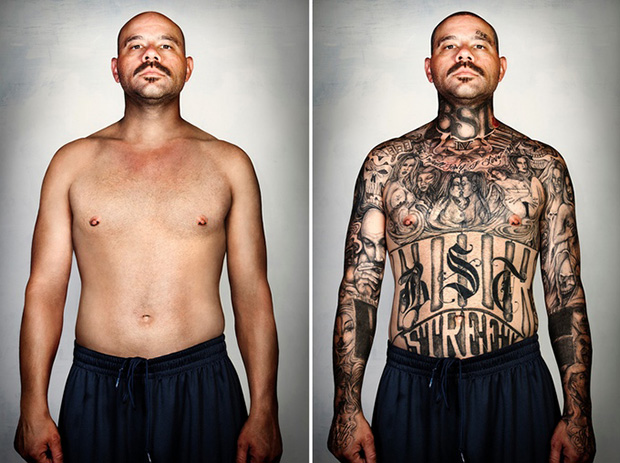