Anxiety Made Visible in Photos 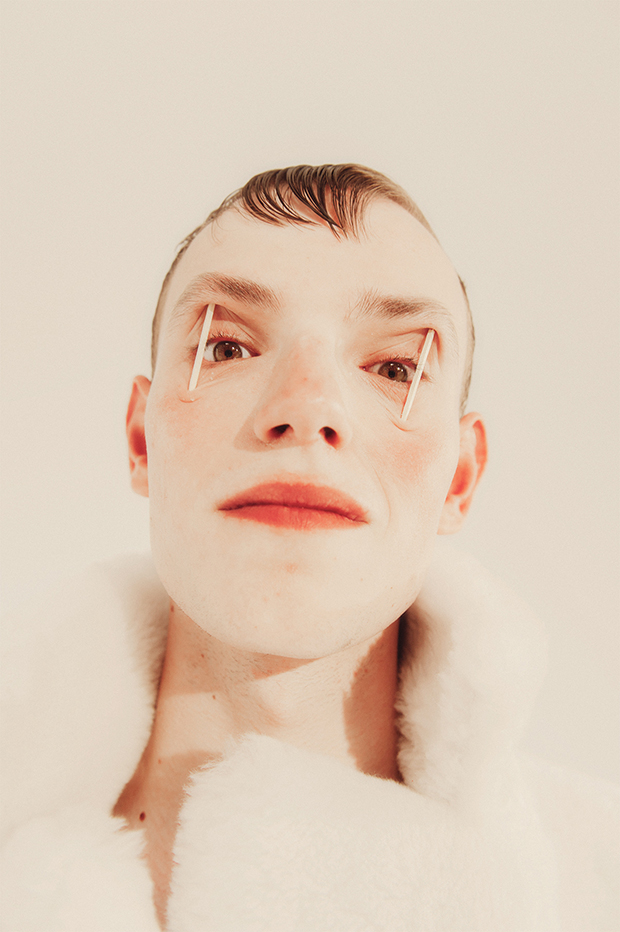 “I always wondered how sleep deprivation couldn’t kill you.” 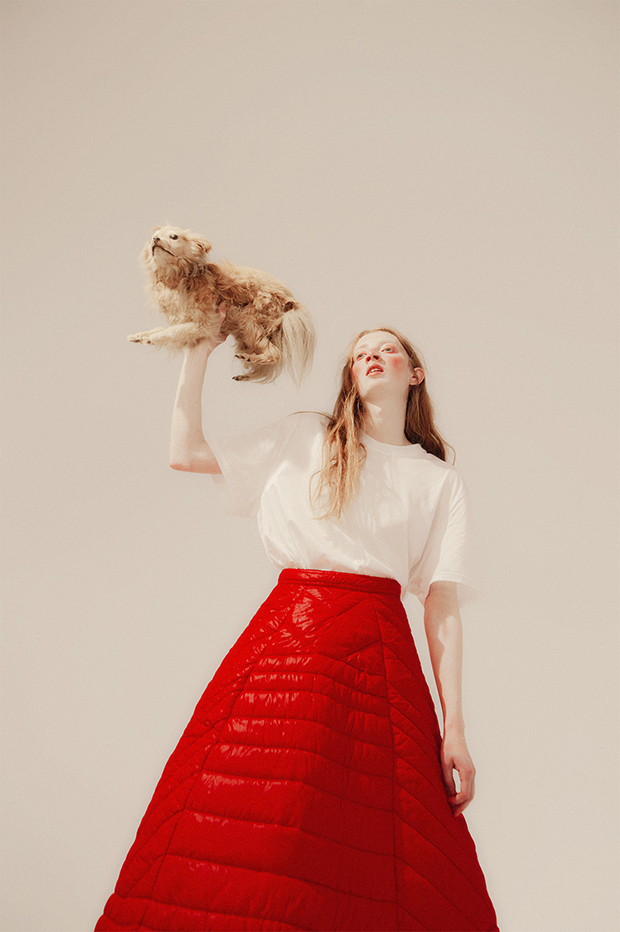 “I bought a little dog to force me to leave the house at least once a day.”

Mental health issues such as anxiety and depression are often dismissed, as they are afflictions which do no always manifest themselves visibly in the physical body. It is important though to remember that just because they cannot be seen, it doesn’t mean that they are not real, and furthermore that such attitudes further isolate those carrying this burden. Few who suffer from a mental health issue haven’t heard or felt that surveyors of their health were all thinking the same thing: “But you look fine on the outside”.

Photographer Steph Wilson suffered from anxiety from the age of 11 all the way up until her early 20s. The Bell Curve is the artist’s attempt at making these non-tangible, internal afflictions visible so that others might better understand the real symptoms experienced by sufferers of the condition. Her literal and symbolic depictions of anxiety and the coping mechanisms she discovered to temper it along the way succeed in expressing the internal externally. 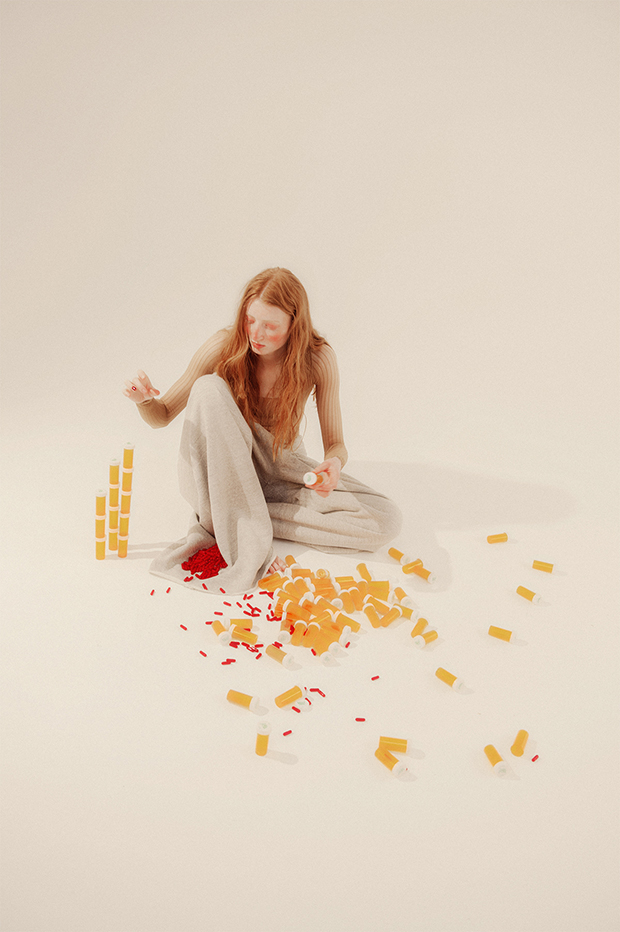 “Medication is either your best friend or your worst enemy.” 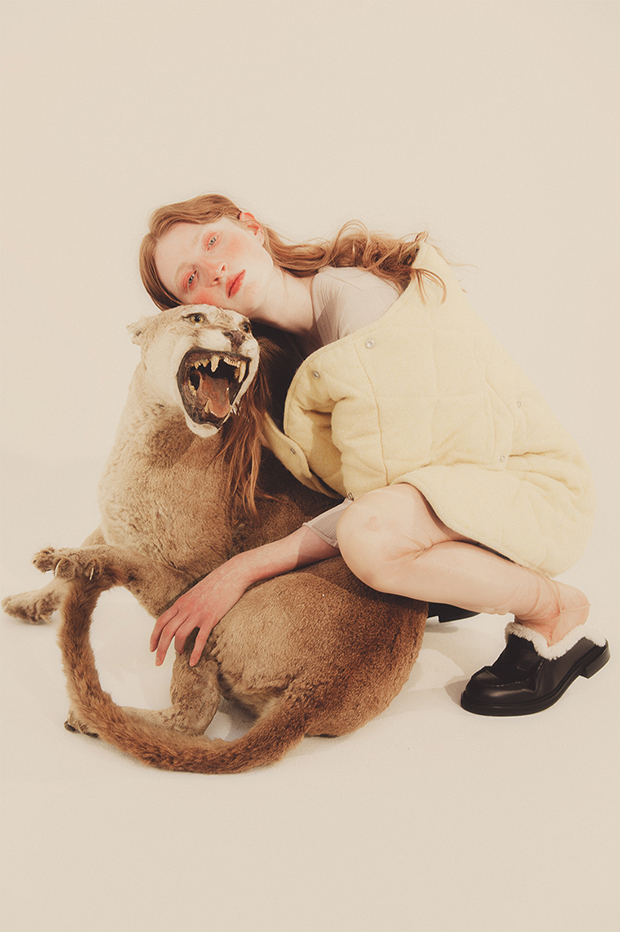 Why did you feel compelled to tell this story?
“Anxiety was such a prominent part of my life. Ever since I was a child it acted as such a hinderance to virtually everything that I felt that I needed to purge those memories into a photoshoot. Since shooting professionally the anxiety has massively subsided, so it was nice to portray the thing that held me back the most by the thing that help to cure it.” 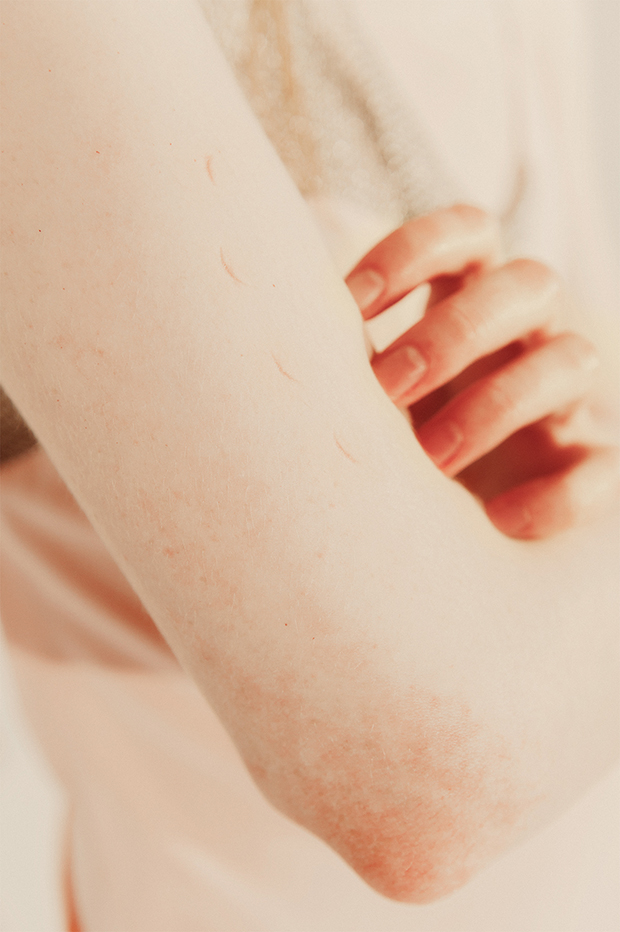 “I clutch my arms in anxiety. The nails make little half moons all up them, which is quite calming and beautiful to watch heal.”

Who are the people you portrayed?
“Hazel is at Storm Models but also personally affected by social anxiety. Bibi was, then, street cast but since has joined an agency, and Gabriel (SUPA) was important to cast as I wanted to be inclusive of both sexes. Anxiety is more common amongst women, but (going by suicide rates in men caused by mental health problems) more dangerous to an afflicted male due to the taboo of seeking help and appearing ‘weak’.” 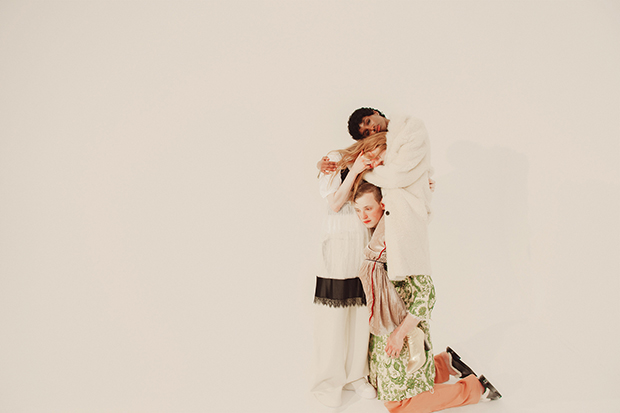 “Claustrophobia is everywhere and anywhere (except toilets.)”

Could you tell us a little about your own experience of anxiety and how it informed your work? What is it like to have an invisible illness, did you tell friends/employers/family/co-workers about it?
“I tell everyone about it when possible. I can’t stand the archaic attitudes towards mental health that are still so prominent today. It makes it difficult to empathize with as a non sufferer, I imagine, due to the fact it is “invisible” and therefore hard to relate to. People worry they sound over dramatic or “attention seeking” (a pet peeve phrase of mine) when they discuss it openly, but I feel the more it is normalized and made boring, the less the sufferer will dwell on the poignancy of their own issue. It’s like any taboo: the more it’s spoken about, the more mundane it becomes, and it is then, by default, no longer taboo. I guess this informed my work by tempting me to divulge in issues that are a little touchy, or “inappropriate”. I guess the overall aim is to desensitize the people that reinforce those bullshit taboos in the first place.”

Why did you choose to capture these images in a studio?
“I didn’t want too many distractions from the prop-based metaphors, and for it to be quite surreal (a bit like a panic attack, where all attention is seemingly on you.) Intense but dreamy was the aim.”

Did you have a preconceived idea of the compositions or was it more spontaneous; did you direct your subjects in any way?
“I always direct quite strongly and then, once within that composition or position, I let them relax into it and live it a little, as to not be too static and forced. I had ideas in mind of each shot, yeah, but if I stuck strictly to those, how boring would that be? The best bits are the wobbles in-between takes.” 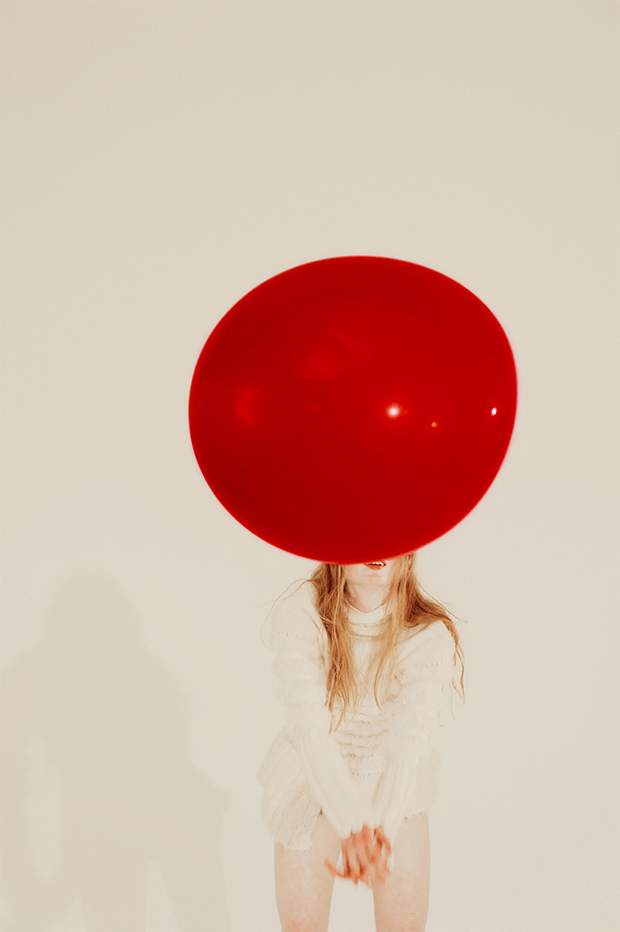 “When anxious I imagine blowing up a big balloon. It helps to control and slow my breathing.”

What did you hope to change, if anything, with this project?
“I hoped it would benefit me personally, as a form of catharsis, but equally benefit those who can relate to the abstract nature of the symptoms and coping mechanisms of anxiety; to make anxiety less frightening, but to also create an appreciation of its extreme diversity. Anxiety affects people on such a broad scale and on so many levels, I guess seeing that aspect of it depicted physically and sympathetically may have, hopefully, given people a bit of comfort that it really isn’t just them on their own. I found that looking at my anxiety in such scrutiny made me realize it is a core piece of who I am, and, in a way, be thankful that it’s got me to where I am today. It gave me a reason to try harder. So, in reference to its personal purpose, the shoot was a bit of a Thank you and Goodbye.” 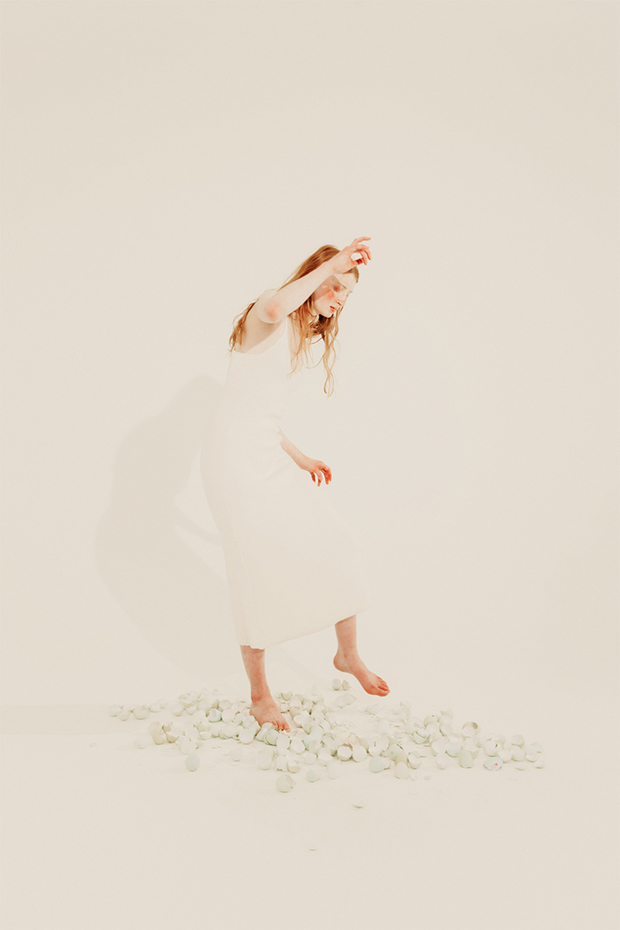 “You spend your life treading on egg shells.” 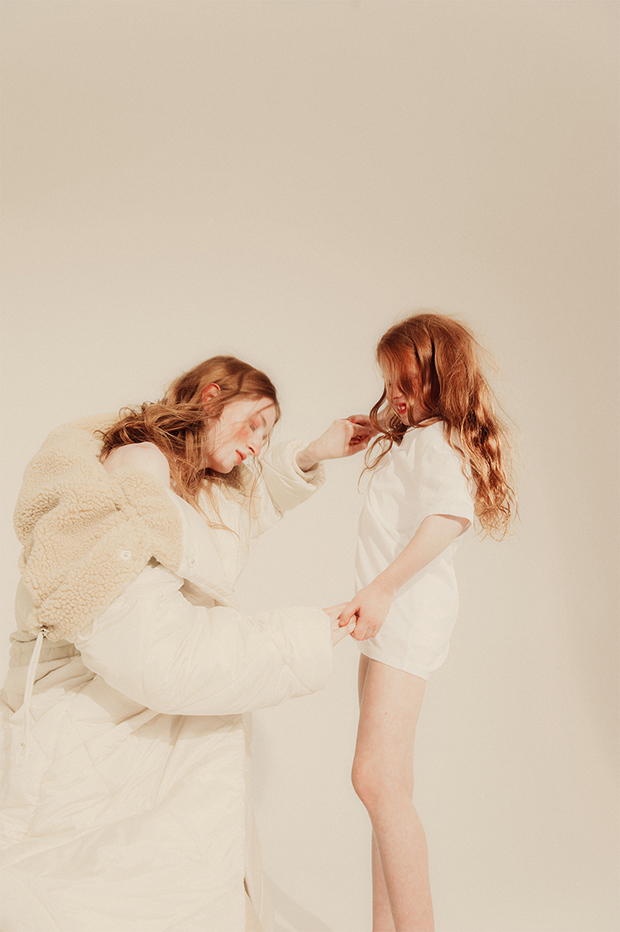 “When you’re anxious you revert back to a child, dependant on everyone.” 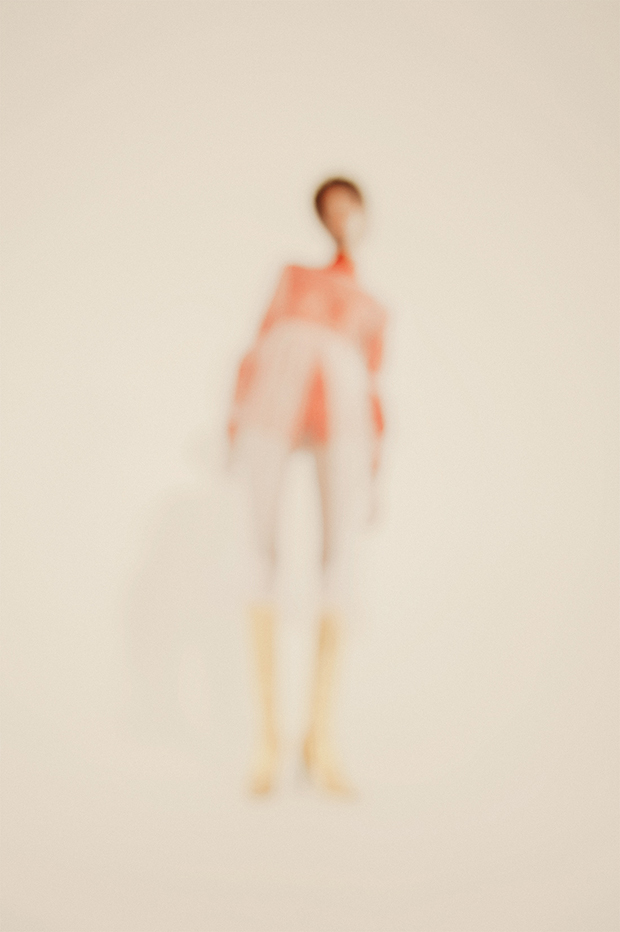 “I get blurred vision during panic attacks.” 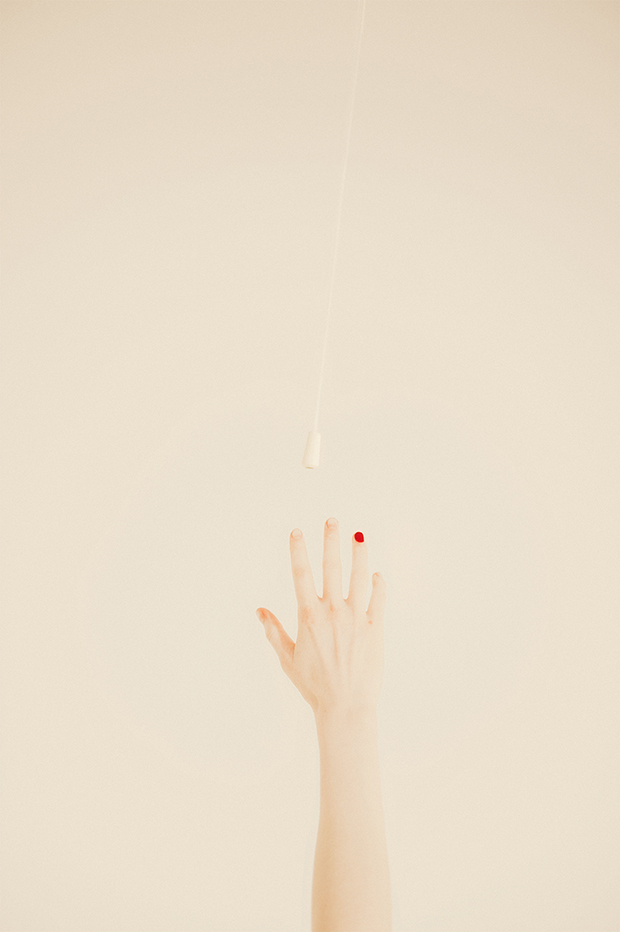 “The simplest things seem out of reach.”