Magnum Photographers on the Beauty and Pain of an Open Heart 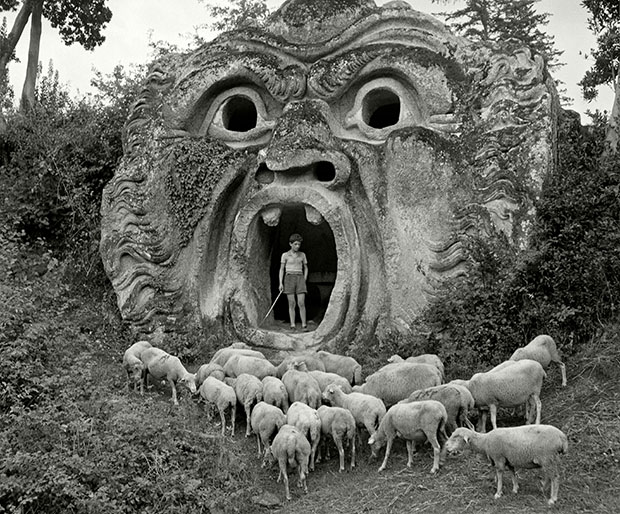 Park of the Palazzo Orsini, Bomarzo, Italy, 1952. “It is speculative for anyone but the ones involved to talk about empathy or emotional connection in a photograph. Once an artist is dead we rely on stories that surround certain images. In some rare occasions we hear from the person in the picture, who might tell us how the picture came about. This image of a shepherd in Bomarzo is such an example. After the book Italy was published with this image on the cover, we found out that the 12-year-old in the image was an orphan boy from Southern Italy. By then he had lived in Germany for the past 40 years and remembered Herbert List very well. He said List had been the first adult to listen to the sad and adventurous stories of his childhood life. The day after this image was taken, List brought him his first bag of candies.” – Peer-Olaf Richter, Herbert List Estate © Herbert List / Magnum Photos 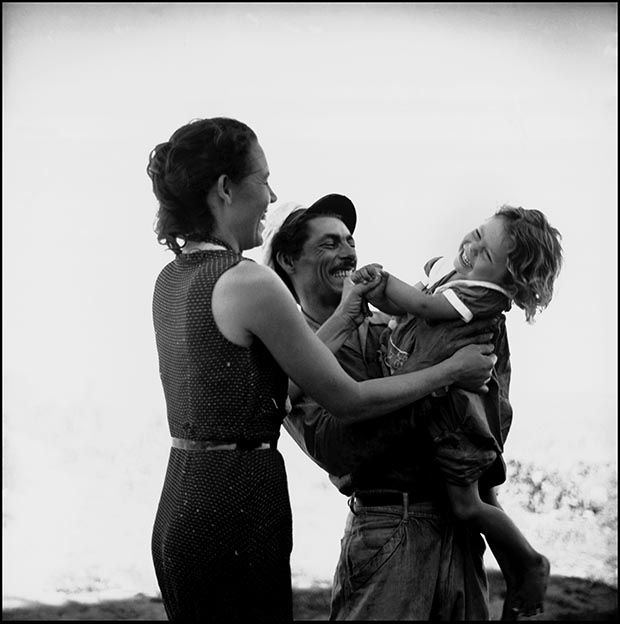 Fishermen and family, Bahia Honda, Cuba, 1954. ““Magnum dispatched [Eve Arnold] to Cuba and Haiti to take pictures for magazine projects that [Robert] Capa had arranged. In both countries, she was confronted with destitution on a level she had never seen, beyond even the migrant farm workers. A Cuban family she was photographing begged her to adopt their nine-year-old daughter, Juana, to save her from a life of poverty and prostitution, and she was so moved by them that she cried when she left.” – Janine di Giovanni, Magnum Legacy: Lives Behind Photographs – Eve Arnold, Prestel, 2015 © Eve Arnold / Magnum Photos 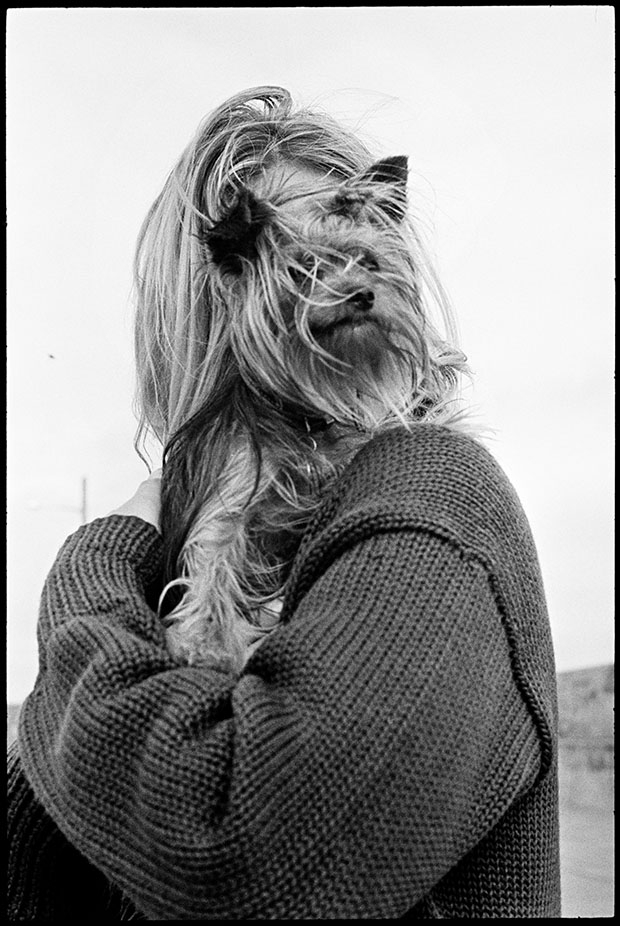 Ireland, 1968. “The ability to understand and share the feelings of another is the reason everyone should have a dog.” – Elliott Erwitt © Elliott Erwitt / Magnum Photos

In a 2013 story for The New York Times, Magnum photographer Peter Van Agtmael wrote of his forebear, Magnum Founder David “Chim” Seymour, as “a quiet photographer.” Many years earlier, his friend Henri Cartier-Bresson described his heart as “vulnerable.”

Of all of history’s greats, Seymour seems in so many ways to be the most gentle and feeling. He photographed the orphans of war, and he tapped into the most tender, painful, innocent parts of himself. It’s with David Seymour’s quiet vulnerability in mind that Magnum presents its latest square print sale.

As with previous square print sales, Magnum photographers were asked to choose one image based around a single theme. This time, it’s Conditions of the Heart: On Empathy and Connection in Photography, which draws its title from Cartier-Bresson’s famous words about his colleague:

“Chim picked up his camera the way a doctor takes his stethoscope out of his bag, applying his diagnosis to the condition of the heart.”

Whether or not they consider themselves to be empathetic, the participating photographers or their estates each picked one picture and one moment shared with a subject. The subjects are as well-known to the photographers as family or as strange to them as passersby on the street. Each penned a brief caption on the photograph and how it relates to the heart.

The greatest myth of photography is that its truth is objective, that the emotions of a photograph’s creator don’t drive the final picture. The reality is much more complicated. A good photograph can wound us and heal us in a way no other image can; as philosopher Roland Barthes put it, the best can “prick” and “bruise” us.

Here are just a few, collected in honor of the quietest and perhaps the most sensitive of the Magnum founders. All of the prints and stories can be viewed at the Magnum Store. As with all of their square print sales, the prints in Conditions Of The Heart: On Empathy and Connection in Photography are limited edition not in quantity but by time. All prints are $100 and available only until November 4th, 2016. 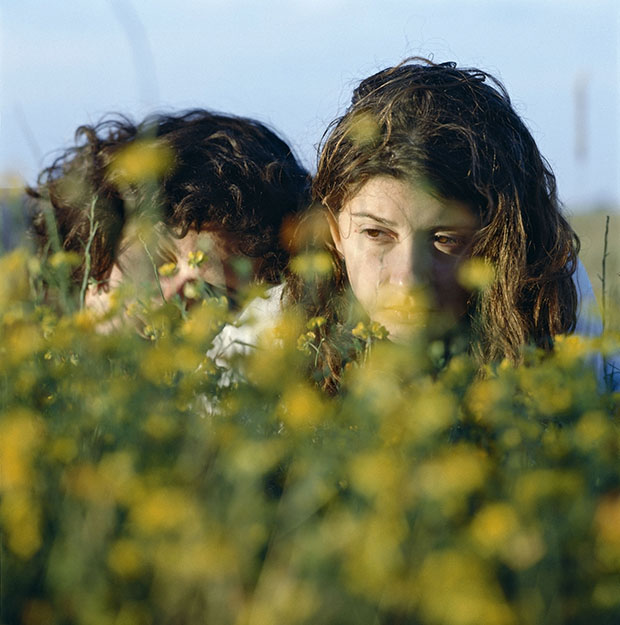 Buenos Aires, Argentina, Yuyitos (Flowers), 2005. “The first photographs I took were of fields, animals and my older sisters in 25 de Mayo costumes.

“I was a kid then, but I’m still making those same pictures. They are in different shapes and more elaborate narratives, but I am still attached to the same concerns and to a general sense of melancholy. My favorite thing to do then (and now) was to lie in the fields belly up and wait for horses and cows to come sniff me while I held my camera under their noses. Years later, in those same fields, now with Belinda and Guille, we played out scenarios, little dramas, sketches, still-lives, dances, songs and all kinds of general silliness, so that the fields became a grand, expansive stage. 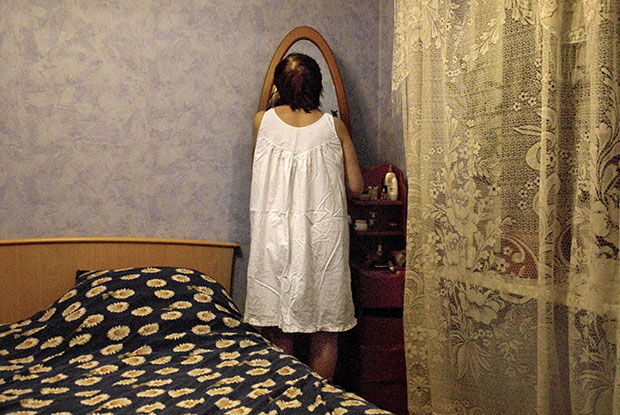 Ou Menya, 2009. ““This photograph was one of the first I took where I finally could feel what photography means to me. Before, I had always treated people as pawns in my photography. I would wait for hours until they came into the right position. But I was never satisfied with the picture and felt that I was missing something… I took this photograph during a trip for my graduating project (Ou Menya), on one of the first nights spent with people I had met on the streets of Russia.

“Without saying a word, she took me under her arm, brought me to her tiny house, fed me and showed me how to wash myself in a little basket. Still arm in arm, still in silence, we then went for the most peaceful walk I had ever taken. I remember us standing still over the icy fields. We came home and watched a Russian version of The Bold and the Beautiful. She was in the seat she would sit in every evening, I was in the seat next to her. She gave me pajamas to wear and took a picture of me. I took one of her. Everything seemed so simple, logical and beautiful. 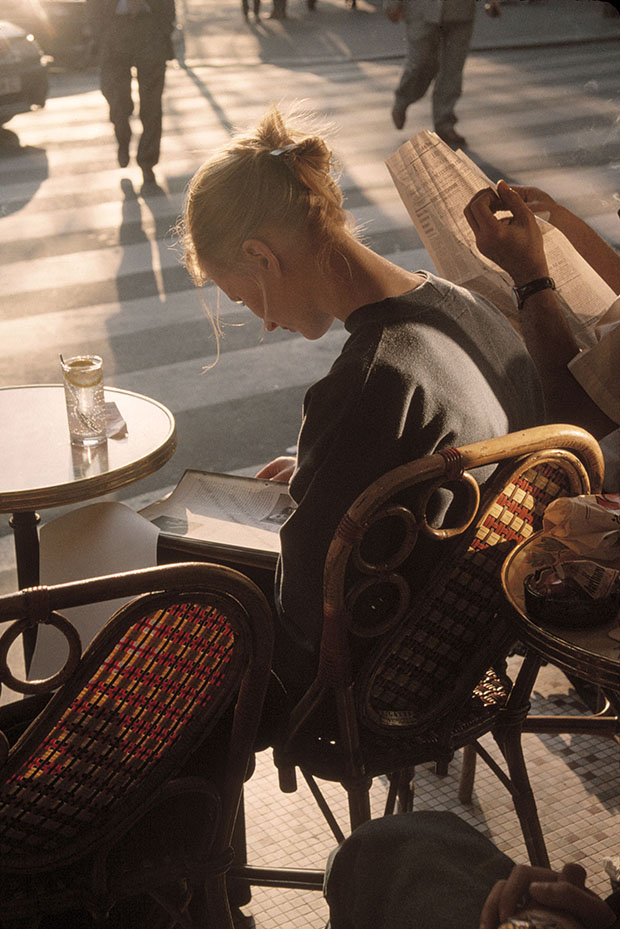 Paris, France, 1996. “I chose this photograph simply because it touches me in some way. I’m not sure why, exactly. Nothing in particular is going on here. A street scene in the Latin Quarter in Paris, that’s all. But it’s possible that, like me, someone else might feel touched by it as well. By its warmth, proportions, overall harmony. But what does this have to do with the stated theme, ‘Empathy’?

“We were asked to select an image that relates to compassion. I have quite a few photographs that are capable of eliciting empathy. But I decided to choose this light-filled one. I think that beauty will make a person kinder more quickly than admonitions.

“Empathy is that rare point of intersection between ethics and aesthetics. Something that all the great humanists eventually arrive at. ‘That which is aesthetically perfect is ethically noble.’ Or, as Dostoyevsky so aptly put it: ‘Beauty will save the world.’” – Gueorgui Pinkhassov © Gueorgui Pinkhassov / Magnum Photos 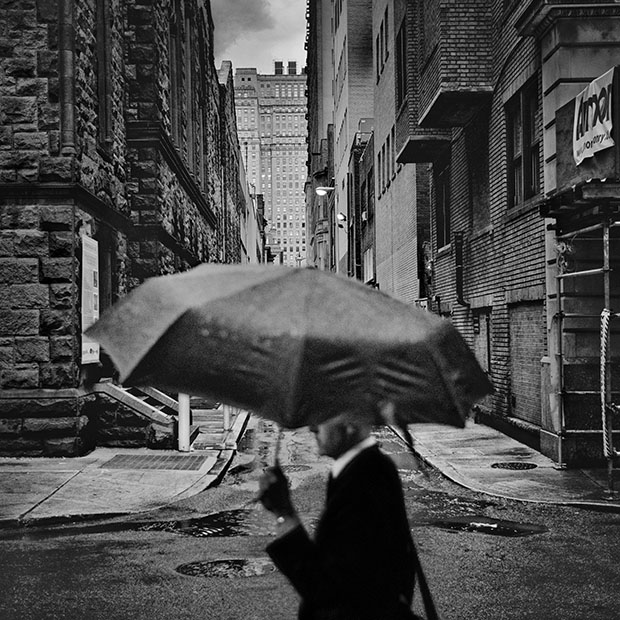 Downtown Philadelphia, Pennsylvania, 2016. “Emotions, like photography, are spontaneous and fluid. A situation that one thinks might lead to feeling empathy can instead leave one feeling detached and alienated. But sometimes, a fleeting moment caught just from the corner of the eye draws you in and connects you. It cannot be planned or managed. Good photographs are the same.

“This photograph was taken in downtown Philadelphia, a city with a population of 1,526,006, where more than 25% of people live below the poverty level.” – Matt Black © Matt Black / Magnum Photos 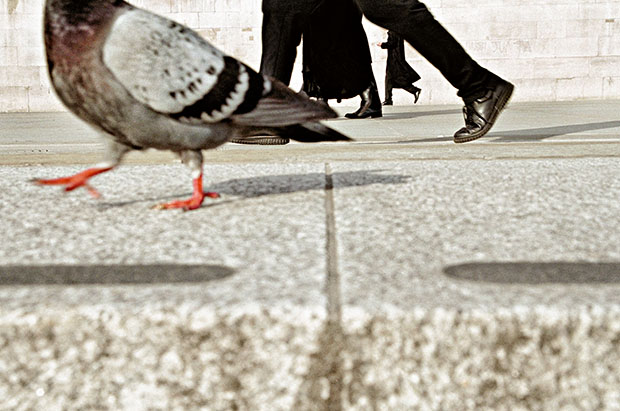 Trafalgar Square, London, England, 2004. “This is the picture I get the most compliments on. I shot it in Trafalgar Square, London, early one weekday morning. I was fascinated by the workers’ black legs and their graphic shapes against the white wall. I had been bending over for about half an hour, when a far too confident pigeon landed and decided to strut by. I instinctively shot this one frame but, as I was doing so, I noticed something had happened with the human legs. It all happened so quickly that I wasn’t exactly sure what I had got, but something felt right. When I saw my contact sheets, I was delighted to find legs within legs and that the coattails mimicked the pigeon’s tail. I like to think that humans aren’t the only ones that need to get up early for work.” – Matt Stuart © Matt Stuart / Magnum Photos 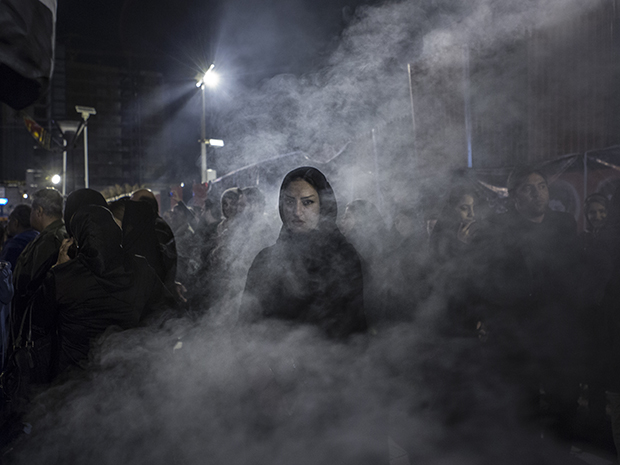 Iran, 2015. “When I take a camera in my hand, the world around me slows down. As do I. I love to work slowly, to have time. People, in an event like the one in this picture, will start to trust me in this way, which allows me to blend in. 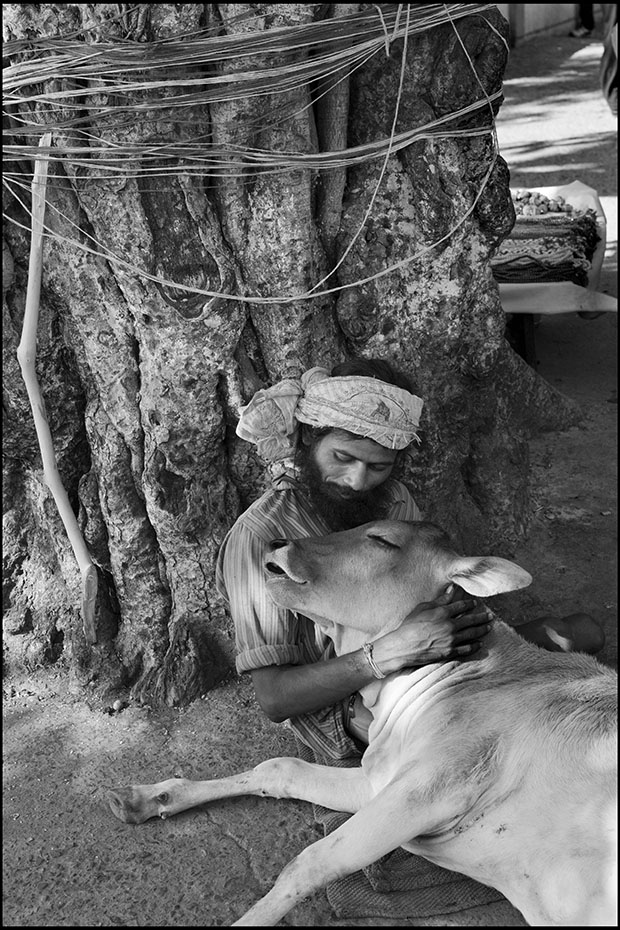 Homage to Chim (David Seymour). “I do not believe in empathy in photography, unapologetic or otherwise. I believe in sharp observation, always, and in confrontation with my subjects, sometimes. Although I never felt close to the work of Chim, nonetheless I admired his engagement and appreciated the empathy with which he photographed his subjects. There is more than empathy between this beggar in Rishikesh, India and the calf he is cradling like his own baby. There is love and compassion. The beggar, paralyzed in both legs, spends half of the alms he receives to feed the calf whom he has raised since it was born. The calf is growing up and will soon be a cow, no doubt a sacred one, like the tree behind them.” — Abbas © Abbas / Magnum Photos