Life goes on in the abandoned villages found in rural Russia 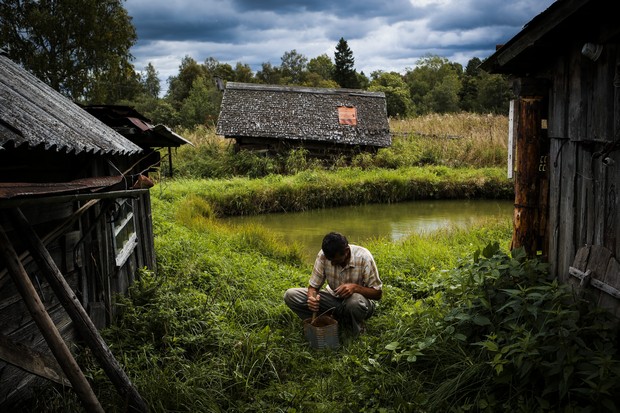 Sasha prepares a mixture for the repair of the Russian stove. Elyakovo Village, Kostroma region. August, 2016 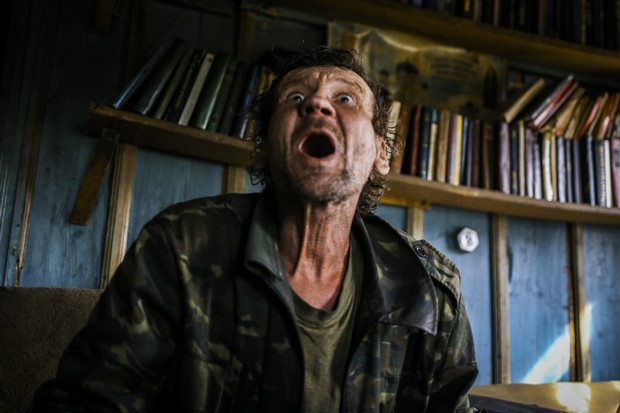 It took just 6 years for 214 localities in the Kostroma region of Russia to become abandoned. Between 2008 and 2014, most inhabitants left the area seeking somewhere with better infrastructure. What they were leaving behind became known by those who stayed as the ‘desert’, or ‘the wilderness’; there are roads, though they are poorly maintained. Electricity, schools and hospitals are a rare find. For their collaborative series Desert, in July 2016 Kazakh photographer Dima Zharov and Russian photographer Liza Zhakova set out to find these remaining inhabitants, curious as to why they stayed.

Among those they encountered was Lecha, a Donbass coal miner living in Spirdovo village. Lecha owns a second house in the more populated village Konyshevo, though doesn’t seem in any hurry to move there — he feels more comfortable living far away from other people. “I arrived there when I was twenty something, closed my eyes, pointed at the map and hit Kostroma” explains Lecha. “I get minimum pension payment, but it’s enough for me. We have groundwater, I don’t need to pay an electricity bill. All the money I get I spend on food and alcohol. If you want to earn something – pick berries or mushrooms. Go fishing, set traps, do as you wish – no need to go anywhere. I’ve been on a binge for 10 days. Take 6-7 bottles and I’m already wasted. Nevertheless, I’ll go and look for something more to drink. I only buy homemade vodka. A day earlier, two days later – we are all headed that way. What’s the difference whether I die today or 10 years later – no difference at all”. Lecha’s life in the village is not entirely solitary, he often receives visitors, hunters, friends, women: “I’ve been married 3 times here. I have 10 children! All the girls liked me”. Like the few others who remained in the region, Lecha doesn’t understand why everyone is leaving: “they had everything they needed there – they grew and kept everything themselves. Perestroyka (the decommunisation of the Soviet Union) comes, and everybody flees to the city”.

Sasha grew up in Elyakovo Village. In winter he works as a stoker in a school where his parents live, in summer he does whatever odd jobs he can find. “It was interesting when there were so many people around. But time flies, that’s it. I used to hunt cocks of the wood, and now I can’t find a single grouse” explains Sasha on his experience in the remote village. In the past there were around 9 houses, of which one burnt down and the other collapsed. About half of them were inhabited, but everyone left. Sasha stayed as he couldn’t envision himself living in the city: “I can go there for 4 days, but I can’t stand more than that. There is a cemetery near the church, all the villagers are buried there. My grandma and uncle too. That’s a pity.”

Farmer Alexey Fedorovich and his wife Zoya Timofeevna Chernovs occupy the only house in Assorino village. Alexey owns nearly 20 hectares of land, both fields and forest, and the family keeps livestock: cows, pigs, sheep, hens and geese. It’s difficult work for just the two of them, though during the summer months their son and his wife visit, bringing along the grandchildren; they all help out with the farm and housework. “We should have stopped working, we have no energy left” says Alexey. Some moments pass, and he has a confession: “there have been some binges, come to think of it. The problem is I have a screw loose. If there is some alcohol left, and I need to work – the hell I’m gonna work. If you drink again, you need more. And how can you work when you are drunk? Because that’s how it is. Life is too short, you know”. 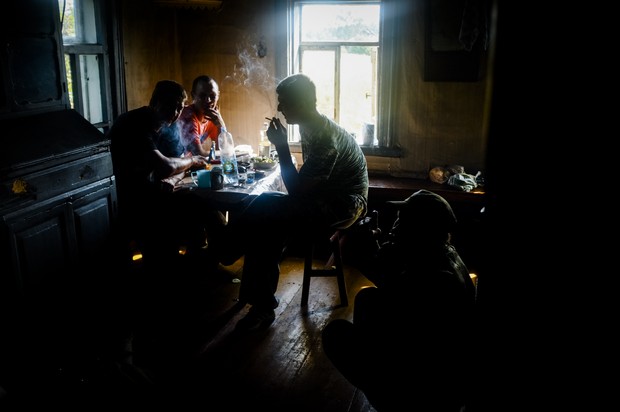 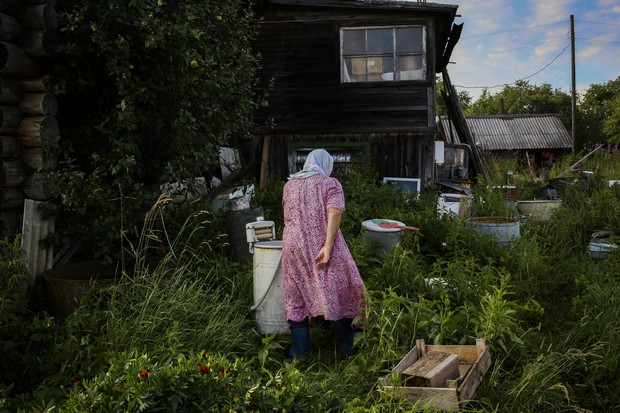 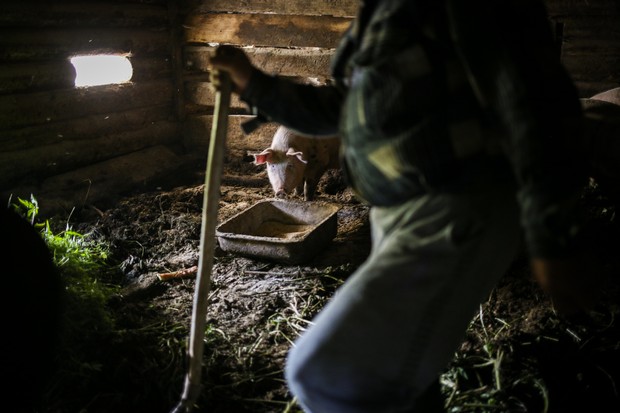 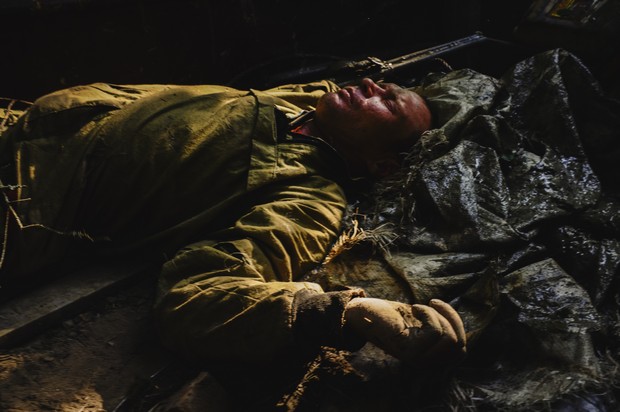 The sleeping hunter friend in the back of the tractor. Spirdovo Village, Kostroma region. August, 2016 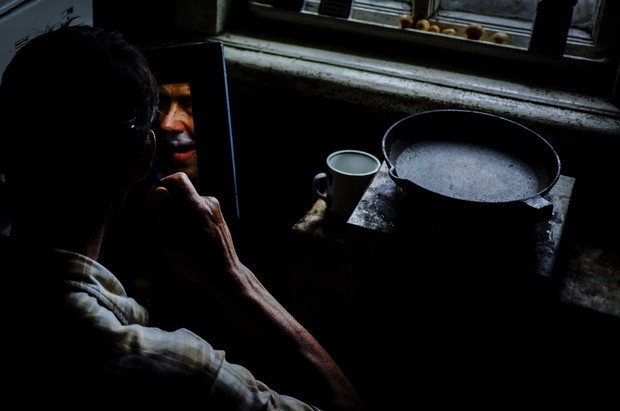 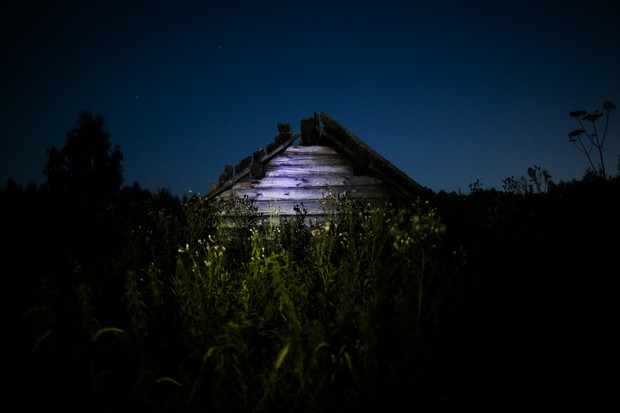 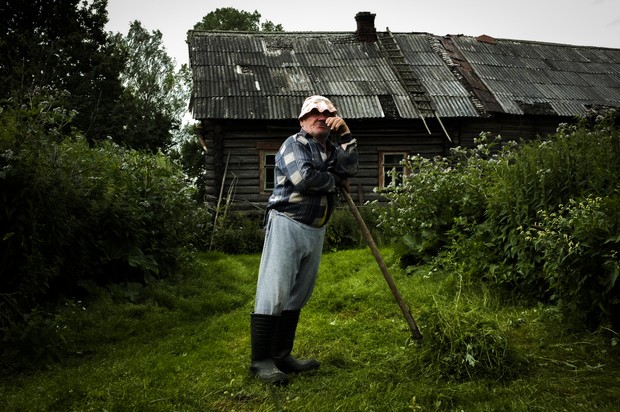