LG Reveals the Breathtaking Beauty of the Northern Lights (Sponsored)

An old Norse legend once explained the Northern Lights as the glittering shields of the Valkyries bringing fallen soldiers home to Valhalla. Gazing up at a black night sky, it’s easy to understand the mythology; the stars and aurora couldn’t possibly be from our world, and they transport us to some mysterious place well beyond human comprehension.

Unfortunately, mankind has lost our tenuous connection with the elements and the folklore that haunted our ancestors. Human development has not only weakened our connection with the earth below us but also with the sky above; an estimated 80% of Americans cannot witness the black night due to light pollution. Worldwide, 33% cannot see the stars.

Initiatives to turn off the lights around the globe have shown us what we miss when we lose touch with the sky. In the US, for instance, the International Dark-Sky Association (IDA) has raised awareness about the consequences of light pollution. The World Wildlife Fund (WWF) organized Earth Hour, inviting participants to forgo their electronics for one hour each year.

In 2006, activist Andri Snaer Magnason called for all residents of Reykjavik, Iceland to turn out their lights for an entire 30 minutes. He called the campaign Lights Out Stars On, and for the first time in a long time, the city witnessed the Aurora Borealis as it painted the obsidian sky above. In turn, the international electronics company LG was inspired to bring the divine experience to people around the world.

When we think about light pollution, technology is usually the culprit, but for LG, the goal was to bridge the gap between electronics and nature. What if, they asked, we could make something that honored the earth and its natural wonders?

The LG OLED TV is unlike any television previously released. Like the black Icelandic sky, the OLED doesn’t use backlight panels, meaning that everything on screen shines brightly against the darkest black. Last summer, LG teamed up with Magnason and creative director and Youtube sensation Lewis Hilsenteger of Unbox Therapy to realize the Lights Out Stars On concert and bring the experience of the aurora borealis to a wider public than ever before.

Icelandic musicians GusGus, Olafur Arnalds, and Asgeir performed against the staggering backdrop of the Northern Lights, displayed on 40 LG OLED TV screens. 1000 guests, including NASA representative Rodney P. Grubbs, were blown away. “These kinds of events can inspire people and remind people of the fragility of this rock that we call Earth that we are all sharing together,” he said.

“Technology is at its best when it enables people to have natural experiences that normally would require them to physically be somewhere,” Hilsenteger added, “I noticed an immediate difference the moment I plugged OLED in. The superiority of OLED – particularly for content utilizing darker color palates – is immediately apparent.”

Until November 20th, 4,000 photographers by Icelandic artists will be on view at the OLED TV Gallery at the Harpa Hall so that visitors can witness the scene firsthand. Unlike other screens and LCD TVs, the OLED TV displays startlingly realistic colors and contrast against the pitch blackness of its screen, without bleeding or inconstancies.

Coinciding with the exhibition, LG invites the public to submit their personal stories of the night sky on the LG TV Facebook page. The writer of the strongest and most striking narrative will be awarded their own LG OLED TV. You can post your stories now and tag your friends until the deadline on November 17th. 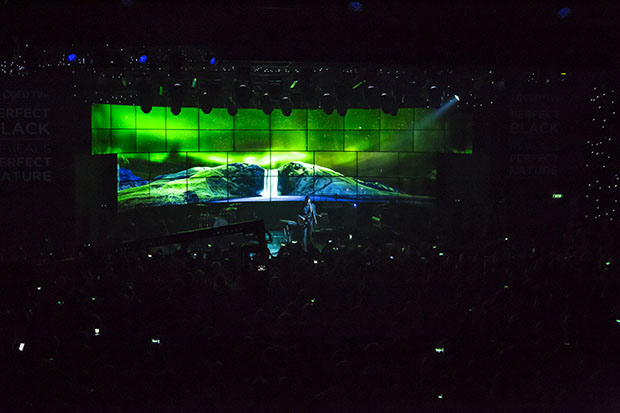