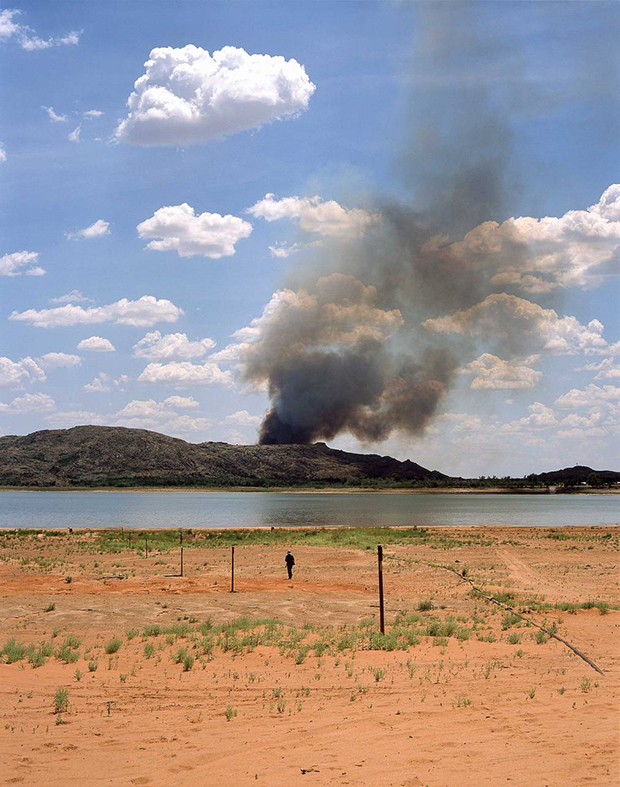 Earth Not Ours is a series by photographer Andrew Williams, made in collaboration with the National Oceanic & Atmospheric Administration (NOAA). He traveled throughout the southwest, touching down in California, New Mexico, Texas, Oklahoma, and Kansas, artfully documenting the landscapes most scarred by drought. He make images that are both documents and works of art, beautiful pictures that force us to confront what’s painful and inconvenient.

This past spring, the Republican presidential nominee told The Washington Post, “I’m not a big believer in man-made climate change. I just think we have much bigger risks.”

Donald Trump is not alone, though it’s becoming increasingly embarrassing for public figures to deny climate change given all the data that supports it.

For our latest group show, we asked photographers- not scientists or politicians- to tell us about climate change. The thirteen photographers selected are based here in the United States and abroad; they come from various backgrounds, including photojournalism and fine art. Still, they have one thing in common: they believe climate change is happening, and they believe that something must be done.

This group show was sponsored by Squarespace, an online publishing platform designed with photographers in mind. With award-winning design, domains, commerce, hosting, and 24/7 support, Squarespace helps photographers discover more ways to market themselves and expand their business. Click here to start a free 14-day trial. 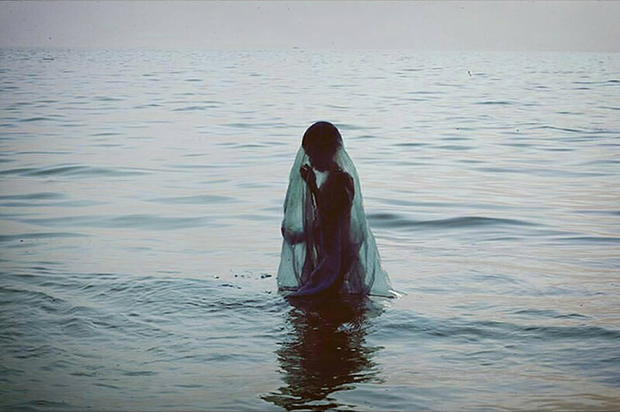 A young boy plays with a plastic bag in the sea bordering the Baseco slum, Metro Manila, Philippines. © Katharina Hesse

Beijing photographer Katharina Hesse has photographed the daily realities of a changing climate throughout Asia, including the effects it’s having on the residents of the Baseco compound. In recent years, Typhoons have claimed the lives of dozens of people in Manilla, and the situation is dire in the slums. More than 12,000 families live in the compound in houses sitting atop reclaimed swampland, where they are vulnerable to natural disasters

The photographer writes, “The country ranks 12th among the 200 countries most at risk for tropical cyclones, floods, earthquakes and landslides according to the 2009 Mortality Risk Index of the UN International Strategy for Disaster Reduction. The urban environmentally poor would be suffering more from the changes than other groups of urban dwellers since they are more exposed to natural disasters.”

She spent some time photographing this boy and his friend as they played with plastic bags. 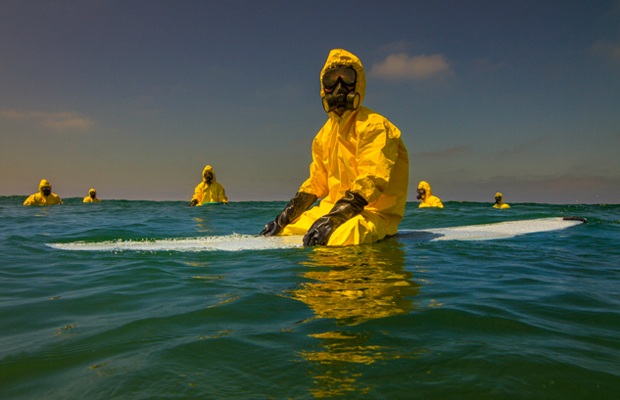 After a shocked Michael Dyrland arrived in Los Angeles to find the water unsafe for surfing, he knew he had to make a statement. HAZMAT Surfing is a work of fiction based on real events, and unless we stop it, it’s also a prediction for the future. During that initial visit to California, the photographer reports that the ocean was contaminated with ten billion gallons of toxic runoff. Humans who came into contact with it risked staph infections, respiratory illness, MRSA, and Hepatitis C. In collaboration with the Surfrider Foundation, Dyrland staged these prophetic scenes in Venice Beach. 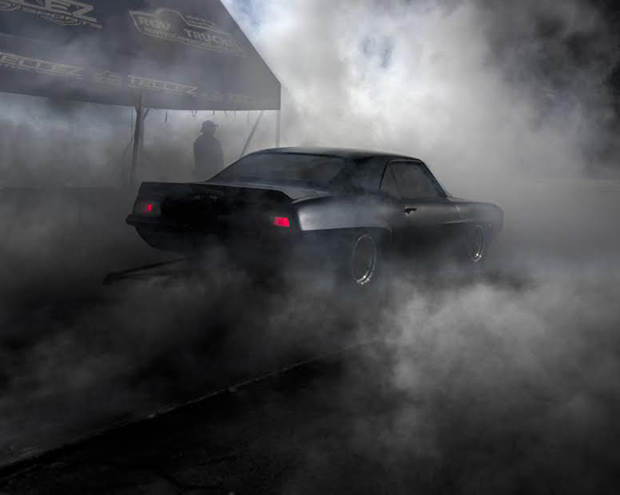 Camilo Ramirez began The Gulf after the 2010 BP oil spill. He documented life along a badly damaged Gulf of Mexico, including states within the “No Fishing Zone” that stretched for an estimated 46,000 square miles. Four years later, he made a similar trip, traversing some 5,000 miles from Naples, Florida, to Texas. With the series, he captures not only the effects of the spill and its aftermath but also mankind’s general attitude towards our resources, including the environment. On one hand, he says, we respect and cherish the land, but on the other, we continue to bring destruction. 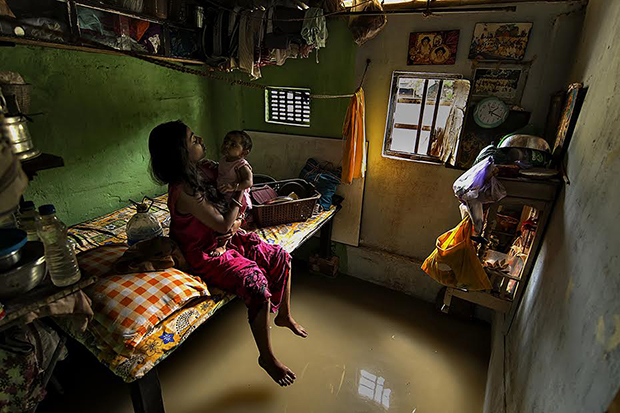 Frames Of Water Color is photojournalist Joydeep Mukherjee’s testament to life in Kolkata during the rainy season. About every other year, he explains, the city becomes submerged in floodwaters. Due to climate change, the city experiences uneven rainfalls, bringing some areas to a screeching halt. For his part, Mukherjee has seen Kolkata reeling from the consequences; he’s seen the street become a swimming pool for children. He’s seen people living in mud houses and on the streets struggle for survival. He’s seen generosity as people help one another and the stray dogs to navigate the water, which can easily come up to waist-level for adults. 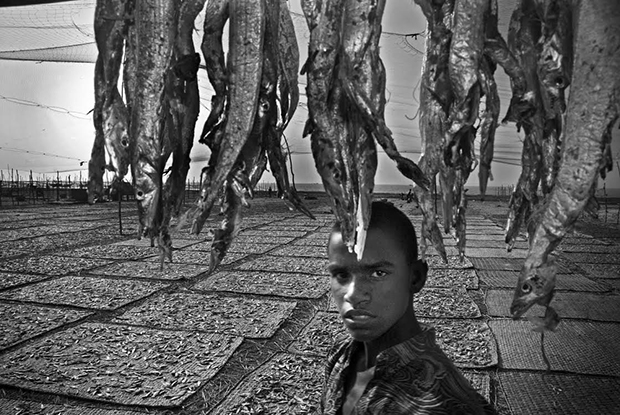 A vast number of population in Bangladesh lives under the poverty scale because of not having a proper education. This results in hardship and unemployment, though for the last decade, the government took upon various minimum primary education programs. It still has a long way to go. This young boy from Khulna came here to work for the season and dry fish to earn his living. This is his first year of work here. © Khaled Hasan

Khaled Hasan tells the story of Ashar Chor in Bangladesh, an island where life has been upended by storms, cyclones, rapidly changing weather, and a vanishing landscape. In conversation with residents of the fish-drying community, Hasan learned of the lost income, disease, and lack of water resources facing the population today. Millions in Bangladesh, the photographer explains, could become climate refugees in the next few decade unless something is done.

“In 2007 the biggest storm SIDR wiped out most of Ashar Chor,” Hasan writes, “There are no cyclone shelters or early warning systems on the tiny Bangladeshi island. 2000 people who live here had nowhere to go. One-third of them perished.” He ends with a plea: “Please control Global Warming.” 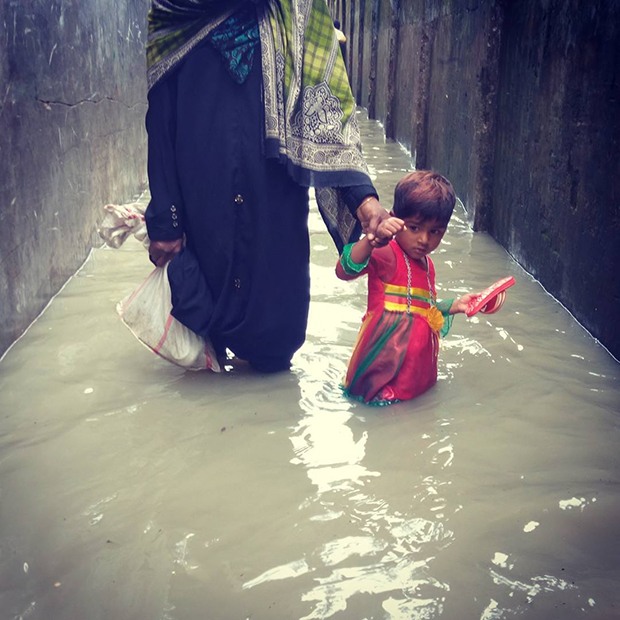 Woman and a kid wading through a flooded street in Chaktai as the tidal flood hits in Chittagong. © Jashim Salam

Like Khaled Hasan, Bangladesh photographer Jashim Salam also documents the consequences of climate change in the Bay of Bengal. Chittagong, unlike the island of Ashar Chor, is a big city, and it too is facing dangerous circumstances. As climate refugees from the coastal areas are forced into the cities, tidal surges plague daily life.

“If things continue to worsen, the business hubs of Chaktai and Khatunganj could become completely submerged in the near future,” Salam writes for Visura Magazine, “my family is greatly affected by this disaster and if it continues, I could lose my roots. 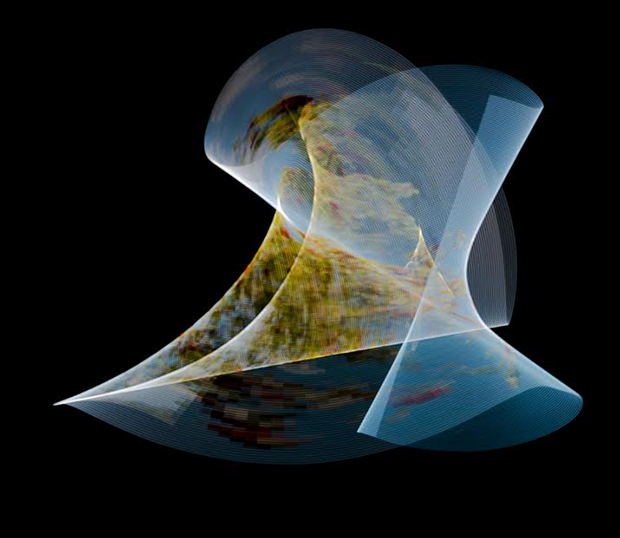 For #Crowdsourced Landscapes, Lori Hepner took a photographic journey through the Arctic, inviting the public to submit words and inspiration with the hashtag #crowdsourcedlandscapes. From there, she created light-painted landscapes using long-exposures. In her work the terrain of Iceland and Finland become distorted and warped, a window into a future world. 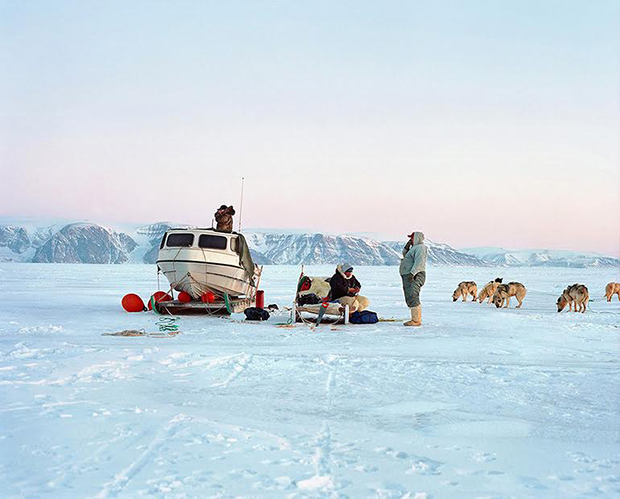 The hunting of sea mammals still occurs in the north of the country, and it involves a journey across forty kilometers of sea ice to reach the open water. Cell phones are used frequently, as is the case here, to keep abreast of the shifting weather – a telltale sign of the changing times. © Sebastien Tixier

Icebergs are melting in Greenland. Photographer Sebastien Tixier journeyed to Qaanaaq to document the Westernization of the Inuit community. He always dreamt of visiting Greenland in his youth, and as an adult, he was shocked to find how rapidly both the culture and the climate was changing. Those who survive by hunting for food can no longer travel on sturdy ice. The photographer writes, “Climate change impacts the quality of the ice and directly determines how far it will be possible to venture and reach hunting spots.” 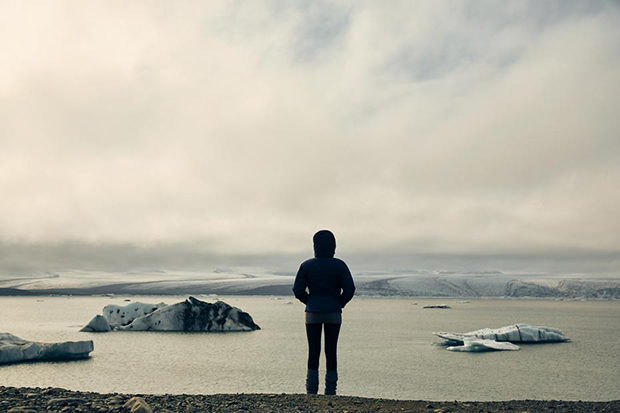 Photographer Aaron Fallon spent his honeymoon in Iceland, where he visited the Jokulsarlon Lagoon. The lagoon, he explains, wasn’t there before about eighty years ago. The Breioamerkurjokull Glacier is melting, leaving water and icebergs in its wake. The glacier once extended to the ocean; now, it’s about one and half kilometers away. “Since the 1970’s the area of the lagoon has grown from approximately 8 kilometers to 18 kilometers,” Fallon explains. 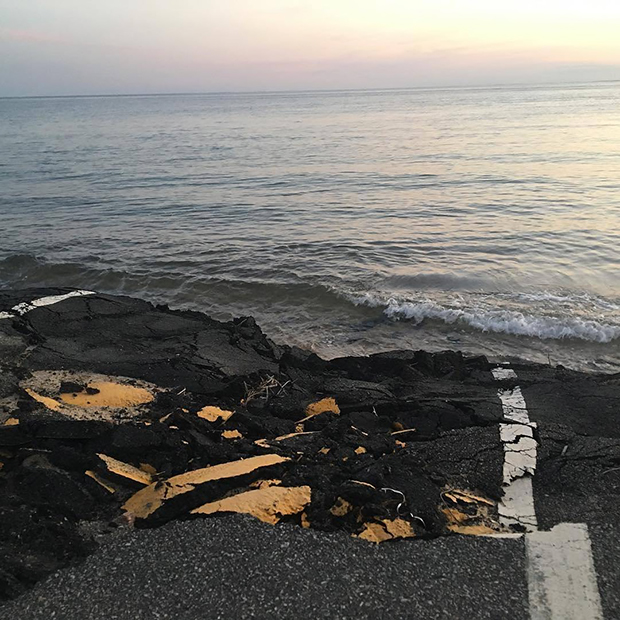 Multimedia artist Leah Dyjak has approached rising sea levels with site-specific installations in Provincetown, Massachusetts. Through performance art, drawings, and photography, she has expressed her connection to a place in constant flux, a site with a rich history and uncertain future. She took the photos at Herring Cove Beach, where erosion has left a beloved landscape in disrepair. This year, storms left the drive-in part of the beach in shambles, and the parking lot must move in the coming years to avoid the onslaught of rising water. 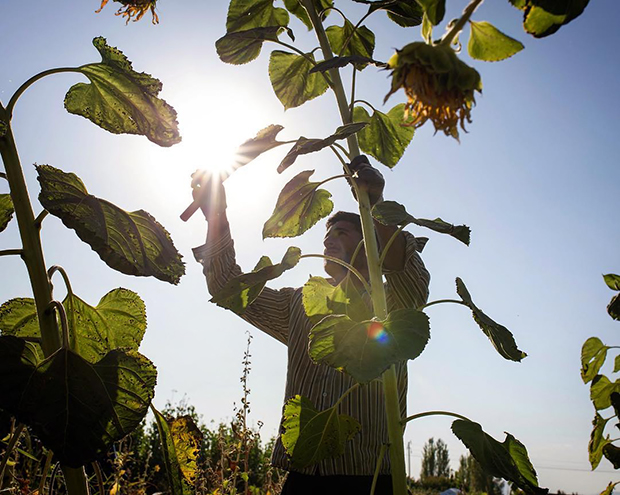 Yorgun Abad Village, West Azarbaijan, Urmia Lake, Iran: Muharram Nemati, 32, is farming with his cousins. He said, “Our product is 50% lower than two years ago because of the saltiness of the agricultural water.” Note that sunflower uses less water than corn. © Hamed Nazari

Photojournalist Hamed Nazari has been documenting the Lake Urmia water crisis in Iran for more than five years. As the sixth largest salt water lake in the world dries up, the once-flourishing ecosystem is dying. Agricultural practices and severe drought have transformed the lake into a bleak landscape similar to a salt flat. Today, the people face water scarcity and economic uncertainty.

“Poor air, land, and water quality all have serious health effects including respiratory and eye diseases,” Nazari writes on his Instagram, “Lake Urmia holds 8 billion cubic metric tons of salt. According to experts, if the lake completely dries up, a vast amount of salt will be released into the region. It will force many people to abandon their villages and towns around the lake, and a majority of the flora and fauna will be lost permanently.” 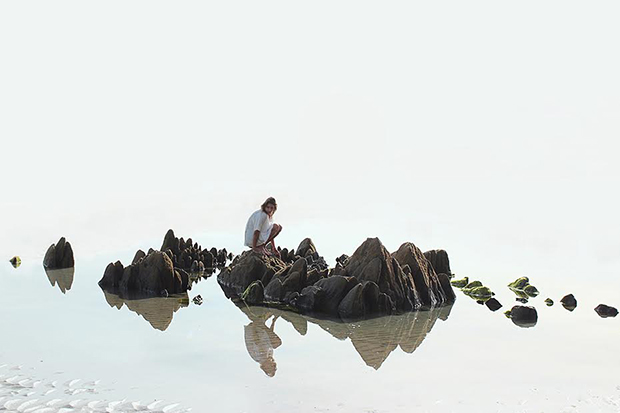 French photographer Orlane Paquet takes a fine-art approach to climate change by imagining what the world might someday become. She leaves her photographs ambiguous and without captions, allowing them to exist in a precarious space somewhere between now and the future. This is her vision of the apocalypse. “The nature takes its course, humans are confronted with their chaotic fate and can do nothing,” the artist writes, “They wait their end.”

Squarespace is a Feature Shoot sponsor. Customers can enter “FEATURESHOOT” at checkout for 10% off their first purchase.