‘Water Stories’ Shines a Spotlight on a Worldwide Crisis 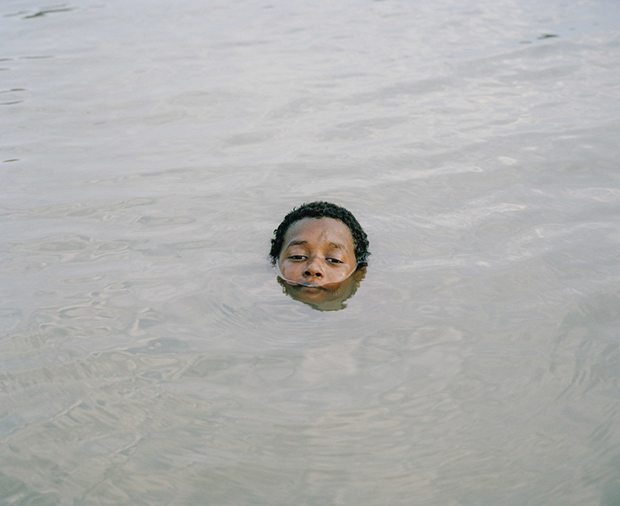 Paraguay River, Cáceres, Mato Grosso, Brazil, 2015: The river is central to daily life in Cáceres, and Claudio and his family go there regularly to swim and play. But just a few miles away, the main sewage pipe pumps directly into the water, and fishermen search for an ever-decreasing supply of fish. Poor sanitation is a common issue in this region. Cáceres treats only 10% of its sewage – 30% below the national average. The Mayor of Cáceres has committed to protecting the water sources. He is calling on the community to work together to reduce the amount of pollution in the river. Mustafah Abdulaziz / WWF UK 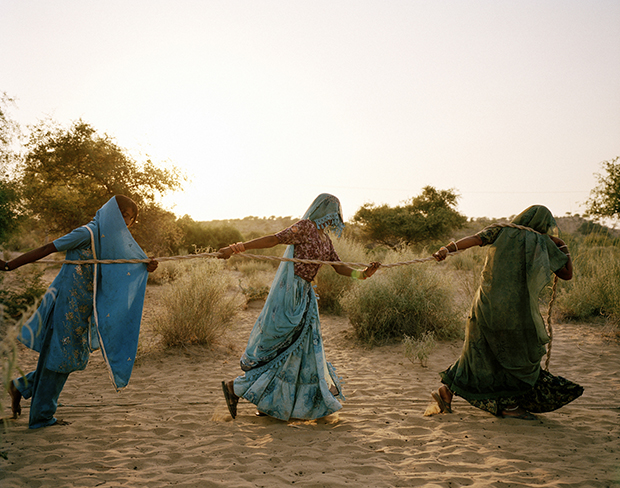 Bewatoo, Tharparkar, Pakistan, 2013: Women pull water from a well in the Thar Desert, where temperatures hover at around 120°F (48-50°C) on summer days. With an extremely low water table and continuing drought, sometimes water must be hauled from a depth of 150-200 feet. “Women fall unconscious on their way to these dug wells,” says Marvi Bheel, 45, a resident of Bewatoo. The journey can take up to three hours. From the water-scarce regions in southern Ethiopia to the desert wells of Pakistan, it is women who are primarily responsible for gathering water. © WaterAid/ Mustafah Abdulaziz

“I believe the single biggest water issue is human beings,” American photographer Mustafah Abdulaziz told WaterAid earlier this year. He’s spent the last five years documenting our relationship with water, traveling to a total nine countries in search of the people at the heart of a global crisis.

Starting September 21st, as part of Photoville at Brooklyn Bridge Park, he will exhibit 68 images from six of those countries: China, Pakistan, Nigeria, Brazil, India, and the United States as part of his ongoing collaboration with the HSBC Water Program, an initiative by over fifty NGOs including the WWF, Earthwatch WaterAid, and HSBC.

Water Stories is not the culmination of five years of work so much as it is a jumping off point for ten more; the project is slated to continue until 2026. When I first reached out to Abdulaziz two years ago about the pictures he took in Ethiopia, he had yet to visit the Amazon in Brazil. He was in the process of shooting a series in California.

Over the next year or so, all of my emails with the photographer would amount to the same thing: the project isn’t done yet. It still isn’t. Abdulaziz has devoted his past, present, and future to weaving together a tale not about any specific place but instead about all of us, the decisions we make, and the consequences of every step we take.

Water Stories at Photoville takes us to Nigeria, where an estimated 97,000 children die of diarrhoea annually, China, where illegal fishing practices and steeply expanding infrastructure have decimated endangered populations. From there, we visit Brazil, where deforestation and cattle, soy, sugar cane farming have led to soil erosion and severe pollution.

In Pakistan, 16 million don’t have access to clean water; in India, that number jumps to 76 million, and nearly 50% of children below the age of five have had their growth stunted by diarrhea and resulting malnutrition. In New York City, our water is threatened by old infrastructure and unmanaged storm water.

Water Stories is in all ways a cri de coeur; where the statistics fail, the personal stories fill in the gaps. One farmer from Osukputu in Nigeria confided that four of his children had died as a result of inadequate, cholera-infected water. He told the photographer, “I felt like I could have died with them because it was so painful.”

Still, for all the heartache present in Abdulaziz’s work, there’s also hope. In Nigeria, hard-earned peace between nomadic and settled farming communities have helped bring water to remote regions.

One middle-aged woman in India’s Rakhi Mandi slum became a sanitation mason and has built thousands of toilets for her community and those surrounding it. In China, the WWF is teaching sustainable farming practices. Water pumps and boreholes are being built in the areas around the globe that need them the most.

Abdulaziz shoots on film because, as he puts it, “It keeps me honest.” He’s interacting with people rather than waiting for a picture to pop up on the back of his camera. Once he’s home, he can learn how the shot turned out.

While we’re all complicit in the hardships in his photographs— remember, “the single biggest water issue is human beings”— we also have the possibility of redemption. All is not lost, and this month, faces from around the world will be mounted on large light boxes and illuminated. From their spot along the East River, Abdulaziz’s photos will be seen from Manhattan as specks of light in the distance.

Water Stories is the result of a collaboration with the HSBC Water Programme, a partnership between HSBC, Earthwatch, WaterAid and WWF, and presented as part of the festival Photoville, in Brooklyn Bridge Park. 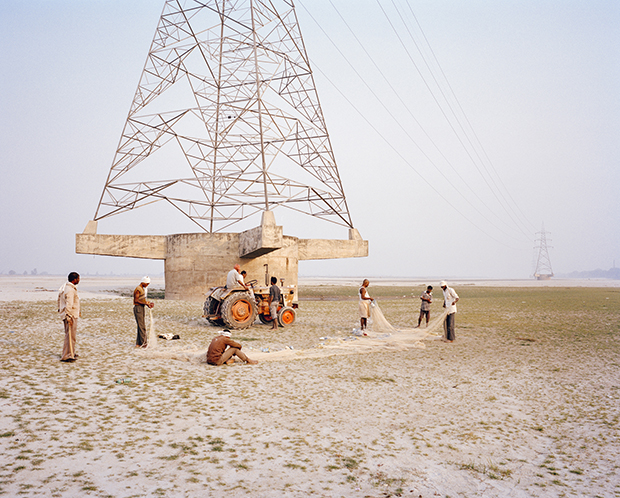 The Ganges riverbed, near the barrage, Kanpur, 2014: The riverbed drained from the barrage, leaving behind a desert-like area where the water used to be. Citizens of the area complain of the poor health of the river – the depletion of the water levels, the pollution, and the disappearance of river life. © WaterAid/ Mustafah Abdulaziz 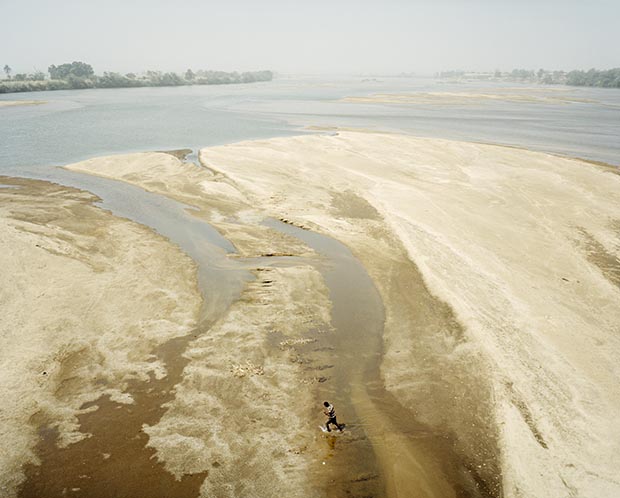 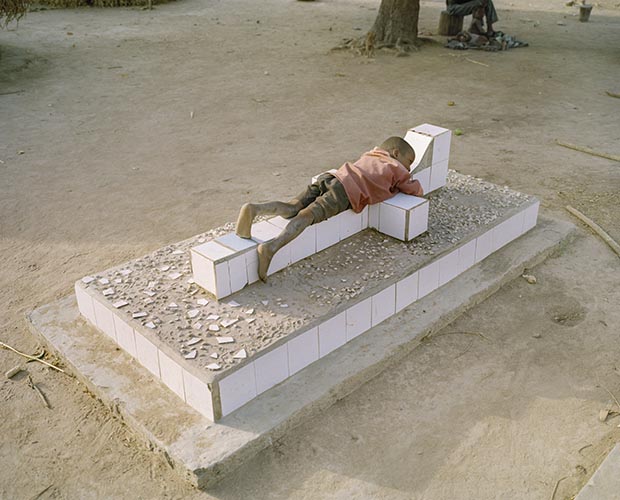 A boy relaxes on an ancestral tomb in the Mkor family compound, Agaku, Benue, Nigeria, 2015: Agaku was badly affected by the conflict between the nomadic cattle herders (Fulani) and the settled farmers (Tiv), during which many people in the area lost their lives. Although peace has come to the region, a lack of clean water and sanitation remains a silent killer. © WaterAid/ Mustafah Abdulaziz 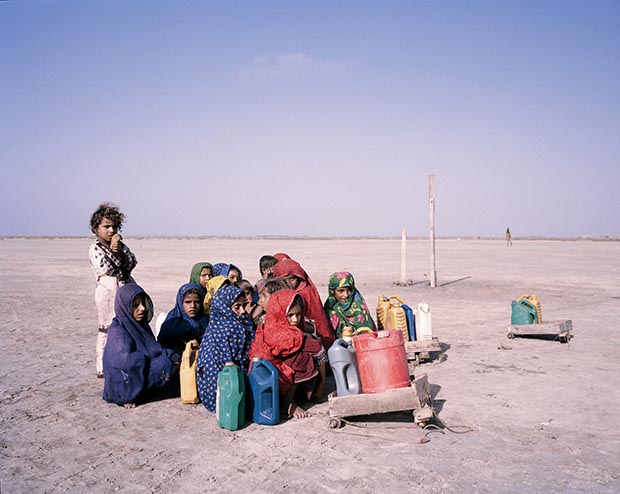 Khado Muhammad Jut, Sindh, Pakistan, 2013: Children pause during their journey to collect water, huddling together against the wind in southern Sindh, where floods gripped the country in 2010 and 2011, leaving behind only barren land. Agriculture in the region was devastated © WaterAid/ Mustafah Abdulaziz. 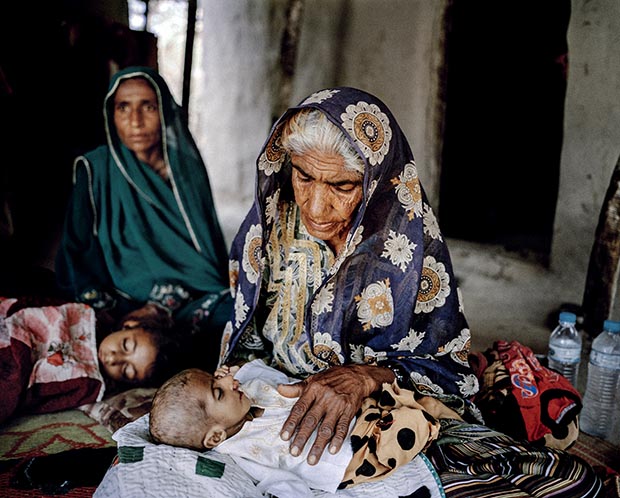 Sahib Lashari, Thatta, Pakistan, 2013: A family without a toilet or water facilities care for four-month-old Shahbaz, who is suffering from diarrhea and vomiting. In Pakistan, more than 40,000 children die every year from diarrhea caused by unsafe water and lack of basic hygiene and toilets. Diarrhea is the second biggest killer of children under five years old worldwide. © WaterAid/ Mustafah Abdulaziz 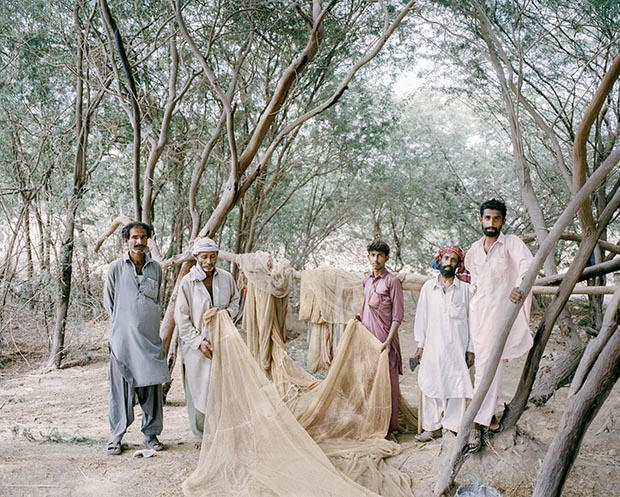 Talib Lashari, Thatta, Pakistan, 2013: Fishermen prepare their nets in anticipation of the tide and their turn to take one of the shared boats out to sea, searching further and further from the coast to catch fish. © WaterAid/ Mustafah Abdulaziz