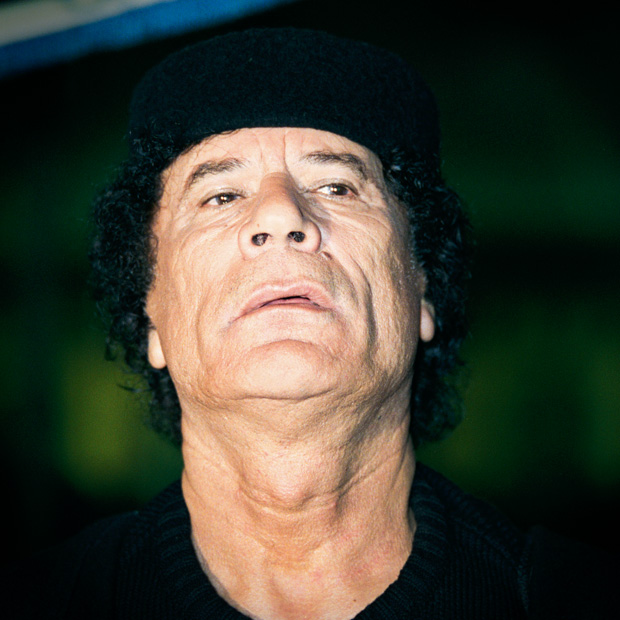 Muir Vidler: I was shooting an international beauty pageant in Libya. On the last day, the organiser somehow arranged that we’d all go and meet Colonel Gaddafi, so an hour later, myself, the journalist and fifteen beauty pageant contestants found ourselves in a room in Gaddafi’s house waiting for him to appear.

Lots of frantic Libyan men with moustaches and shiny suits were running around preparing for him and building up a pretty good sense of anticipation.

Just before he walked in, one of the frantic Libyans told me I wasn’t allowed to take photos and took my camera away from me. So a minute later, I was standing with no camera, watching Gaddafi swishing around the room in a yellow robe kissing and hugging all the girls.

Our Libyan friend told me afterwards that Gaddafi had gestured to me and asked who I was. “A photographer,” he was told. “Then where’s his camera?” he asked. His aide apparently replied, “I don’t know. Maybe he forgot it.’ It’s horrible standing with your hands in your pockets with no camera, watching something that’d be great to photograph.

Fortunately, I did get to go back a few weeks later with the American contestant, and that time I was allowed to photograph him very briefly, although I wasn’t allowed to talk to him – I just had to walk around him shooting while he stood there staring off into space.

Brent Stapelkamp: I think my worst experience on a photo shoot was one day when we were about to go and sit with a pride of lions near a waterhole. It had all the makings of an action-filled photography session with hungry lions and loads of desperately thirsty buffalo. I charged batteries and cleared my CF cards.

No sooner had we arrived when we saw one lion break from the group and go after a lone buffalo. I had all my settings sorted out, framed perfectly and panned beautifully as the lion took down the buffalo in the backlit dust. I must have taken forty shots. The lion was suffocating the buffalo which was taking a while, so I pressed the review button to view my images, and my heart sunk when three words appeared on screen: “No CF card.” I had left the freshly prepared card out of the camera!

Traer Scott: I have to pick just one? I have a had quite a few dangerous moments where I have been attacked by animals, but I would have to say that the absolute worst was when I was first starting out professionally. I took a master class workshop. We had these nude models on a stage in a deserted auditorium with spotlights and all; it was glorious. I shot for about 45 minutes, elated with the idea that I had just gotten the best images of my life, before realizing there was no film in my camera. I felt like I was going to be sick. The “no film in the camera” thing is such a cliché, but it’s happened to everyone at least once.

Gabriele Galimberti: Four years ago, while I was doing my project Couchsurfing around the World, I was in Malaysia shooting a portrait of “my” couchsurfer. I was taking the photo on the terrace of his apartment, at the 11th floor. I prepared my set: my camera on the tripod and two flashes with a white umbrella as reflector on a stand. At a certain point, when I was ready to take the photo, a big gust of wind arrived and the white umbrella with the two flashes flew away for 50 meters and then went down from the 11th floor! Obviously everything was destroyed!

Lissa Rivera: I was out photographing with a friend, who happened to be an international student. I guess there was an undercover cop car in the photo we were taking (I have no idea). It appeared to be an ordinary street scene in Brooklyn to me. Someone told us to stop taking pictures, but I had no clue they were even talking to us. They brought us into an office, where they interrogated us and gave us tickets. We had to go to court. Luckily, the judge dropped it immediately.

Henry Hargreaves: Having an equipment malfunction while shooting the President and only having a Sony Cybershot as backup.

Lori Nix: It was a very hot night in the studio, about 102 degrees. I was shooting a scene (Parade) with an extremely long exposure, about 30 minutes. In addition to the lengthy time, I had a carefully choreographed set of flash and incandescent light sequences I had to perform. Our wooden floors are very old and creaky, and any movement would shake the camera, so I was forced to remain still the whole time. What didn’t remain still was Daisy, our very fat calico cat, who proceeded to walk around the camera at about the 25 minute mark. All my efforts up to that point were ruined, and I had to start all over again. 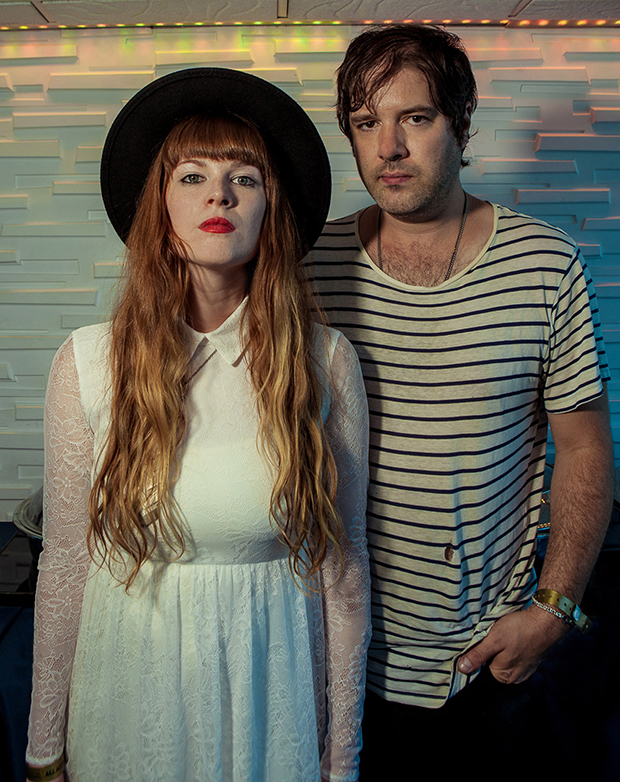 Gretchen Robinette: My worst ever moment on a shoot was when I tore my calf muscle on the way to a music festival last summer. Every time I stepped down, it felt like a hammer was bashing the back of my leg, and it all turned to a dark bruise.

I could barely walk, but I had all these portrait shoots arranged with bands that morning, so i just kept going fueled by Red Bull, limping my way through. Other photographers kept telling me to just go home, but it was harder to leave than just stay in one place and shoot. I know that makes zero sense, but I hate to be a quitter, and if I am shooting, I can somehow forget everything else. Even pain, because I’m just focusing on whats in the camera frame. Of course I had to modify my location options, as I had no choice but to sit on the floor with an ice pack on my leg and ask the bands to come to me. Even though I was given 20 minutes with each band, I could only stand up for about 3 frames for each portrait before I had to rest again on the floor.

But I don’t regret it at all, as it forced me to focus harder on getting good images with multiple bands in 30 seconds. I succeeded on a few of them in a way that I didn’t know was possible due to these limitations, and because of that, it made me a more confident photographer. Mostly because I refused to give up, and whenever you allow yourself to prevail against that part of your brain saying it isn’t possible, these internal doors just open and things start working for you. Or maybe I was just delirious.

Ari Seth Cohen, author of Advanced Style: Older and Wiser: I have worked on campaigns for many brands, and I think that it’s hard when someone wants to control your creative ideas and not give you freedom to express something original and authentic. When I shoot on the street, I have had my heart broken by a few women who rejected my request to take their photo. It doesn’t happen too often, but the ones that got away still haunt me. 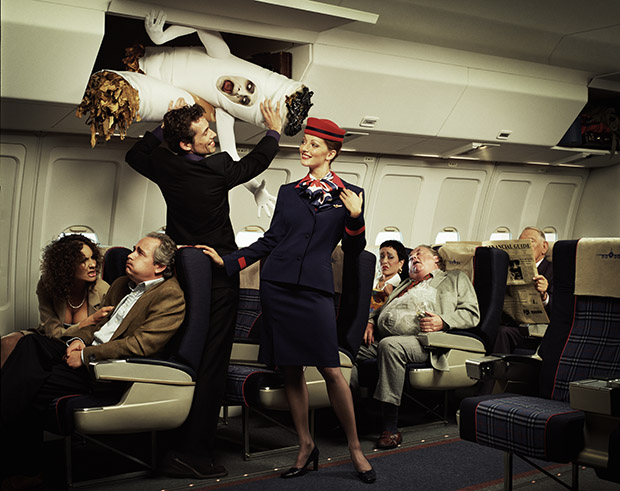 Erwin Olaf: I was shooting for Nicorette on 9/11. It was bizarre. I had two sets up, a subway train and the interior of an airplane. I was standing inside the mock-airplane when my manager came in holding a stewardess outfit telling us that a small airplane had hit one of the towers. It was a very frightening and bizarre day.

Tamara Staples: I’ve luckily never had a terrible incident on a photo shoot. But I’ve experienced some tough moments certainly. Just after my son was born, I was on location in Central Park shooting a lifestyle story for a Pharmaceutical company. I had to take a break every 2 hours to visit the bathroom to pump milk from my breast. This is not something you want to discuss with the art director or your 23 year old male assistant. It cracks me up every time I think of it.

Brian Finke: Wow, okay, starting off on a dark note. I always go into an assignment wanting everything; it’s my personality to want and expecting the most. I love what I do and have a great time doing it. Once I was photographing a pro basketball player before a game warming up on the court. I got like eight frames off then he walked away. Shoot over. It was a shoot for a big magazine; he agreed to it but gave nothing for the photography. The bad assignments I let go of and move on to the next cool experience.

Anna Fox: All bad moments are great. It’s the mistakes and problems that reveal new ways of doing things.