Pain and Perseverance in the Schoolchildren of Thatta, Pakistan 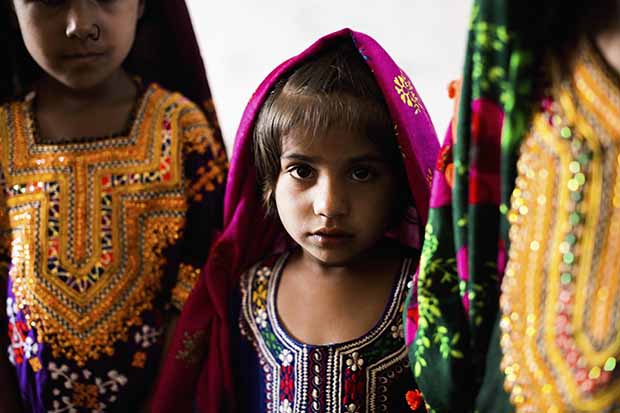 4-year-old Benazir attends class with boys and girls of different ages in Haji Saleh Jatt, Thatta region, Sindh province, Pakistan, 2016. Since gaining a water and toilet block at the school, the head teacher says, “the children are so clean and happy now. That has been a positive change because now there is a cleaner and healthier environment around the school.” © WaterAid/Malin Fezehai 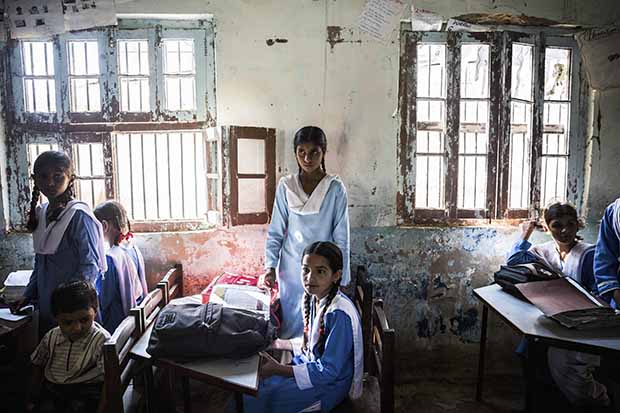 Girls await the start of lessons at the primary school in Chaudury Atta Muhammad village, Thatta region, Sindh province, Pakistan, 2016. Before the H&M Foundation-funded WASH block was built, the girls had nowhere at school to access safe water or go to the toilet. Attendance has increased since the block was built, as parents have greater confidence in the security and safety of their girls when they don’t have to leave the school compound to find a place to go to the toilet in the open. © WaterAid/Malin Fezehai

Shaneela, age eleven, lives in Muhammad Ali Bharj, a village Pakistan. She has never been officially enrolled at the local school, but she does slip into the classrooms sometimes on her own to pick up what she can. “She had hopes one day to be able to read,” Swedish-Eritrean photojournalist Malin Fezehai says, “Her strength and determination left a strong impression on me.”

In collaboration with WaterAid and H&M Foundation, Fezehai traveled to Thatta to document the daily lives of children like Shaneela in the Indus River Delta, where climate change, groundwater salinization, floods, and water shortages have put communities in peril. As women make their way to gather water from Keenjhar Lake, carrying it in terra cotta pots to serve as drinking water for some 16.6 million individuals, the children attend school without the promise of sanitary facilities.

WaterAid, funded by the H&M Foundation, has launched has launched an initiative to build toilets and taps capable of resisting erosion, but the communities in the region face an uphill battle, one that especially affects girls. Some school are unsafe for use, and without access to restrooms, girls cannot attend school while menstruating. The absence of facilities is one reason Shaneela’s parents don’t feel comfortable sending her to school; the fact that she would be one of the only girls in a classroom of boys is another.

Still, Fezehai found hope lurking in the shadows of crisis. She met teachers who cared deeply about educating an emerging generation and kids who believed in their own capacity to learn. Fazia, who is only ten years old, was the impetus for change within her own household. “She had convinced her family to build a toilet at home after learning at school about how important good hygiene and sanitation are to staying healthy,” the photographer explains.

When Fezehai first met the children of Thatta, they were wary of her; for many, the only interaction they’d had with people from other countries was when they were getting their vaccinations. But over time, they warmed up and let her in.

The photographer introduces Shaneela with the following words, a sentiment which doubtlessly could be applied to countless other fiercely determined children in her position: “She was really petite girl who looked younger than her age, but had a very strong, firm voice.”

Noori Tales: Stories from the Indus Delta takes its title from Noori Jam Tamachi, a fisherwoman whose heart and mind won the affection of a prince; as the local legend goes, her body was laid to rest in Kenjhar Lake. The exhibition will be on view as part of Kulturfestivalen now until August 21st and World Water Week from August 28th until September 2nd, both in Stockholm. 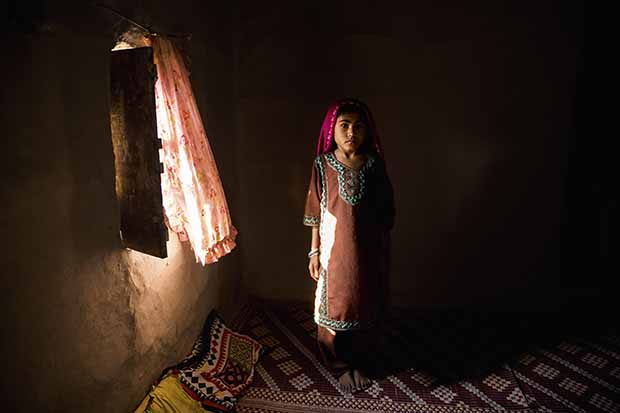 11-year-old Shaneela stands by a window inside her one-room home, Mohammad Ali Bharj village, Thatta region, Sindh province, Pakistan, 2016. “If you construct a school tomorrow, I will send my girls to school. I will give you it in writing. I think it is my responsibility to send the girls to the school. It is not the fault of the teacher; it is us that are not sending the girls to the school. We send boys to the school, just not the girls. We have hand pumps provided to us by the NRSP, as well as toilets, in our village. There is no functional toilet at the school, so there is no running water. It is our preference not to send them because we have facilities in the village, so what’s the point in sending them?” © WaterAid/Malin Fezehai 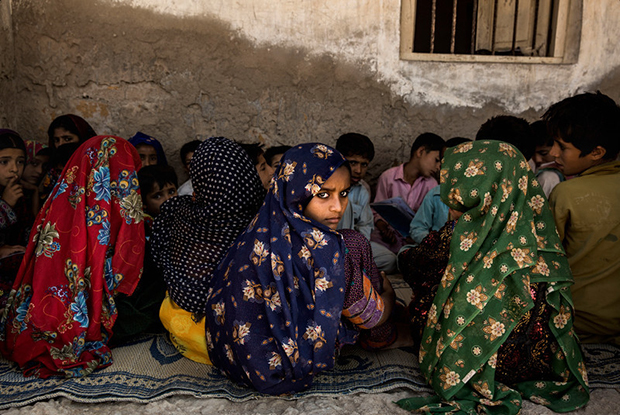 Students in the coastal fishing community Haji Karfoor Jatt – where temperatures can reach up to 45°C in peak Summer – gather for lessons in the shade outside their school building, which is collapsing due erosion caused by saline groundwater, Thatta region, Sindh province, Pakistan, 2016. © WaterAid/Malin Fezehai 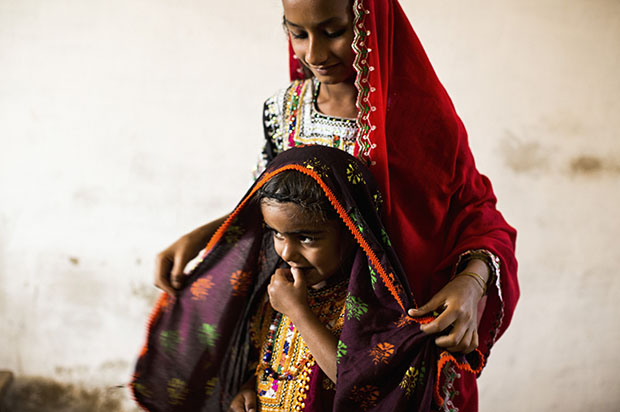 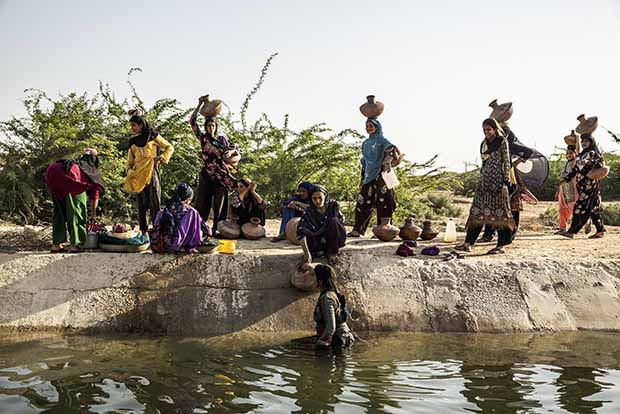 Women collect water in traditional terracotta pots from the open canal in Noor Muhammad Thaheem. The canal transports drinking water from lake Keenjhar to Karachi; however, the local government will not allow the village residents to connect a pipe from the canal to their community because they fear Karachi will lose its water supply. © WaterAid/Malin Fezehai 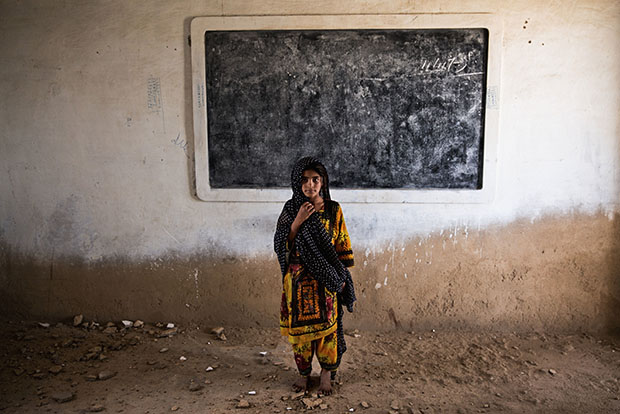 6-year-old Gul Bano stands in the ruins of her classroom in Haji Karfoor Jat, Thatta region, Sindh province, Pakistan, 2016. The school’s walls and ceiling are collapsing, as they’ve been eroded by saline groundwater and salt winds blowing from the nearby Arabian Sea. As sea water encroaches ever further inland through the drying out of the Indus Delta, saline erosion is becoming an increasingly problematic infrastructural challenge, as many buildings are poorly constructed from diluted concrete. © WaterAid/Malin Fezehai 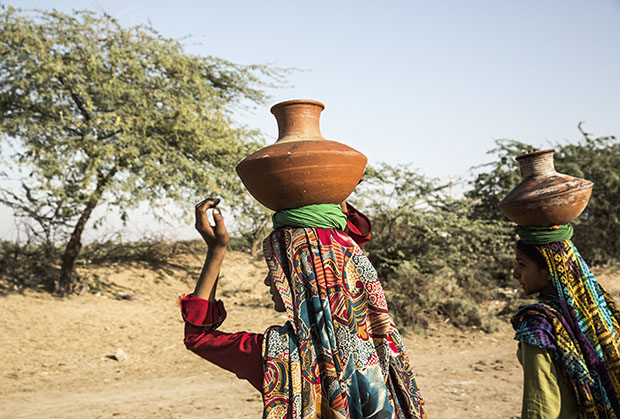 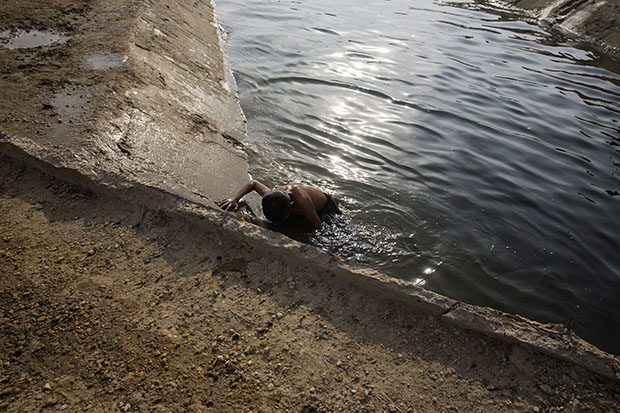 A boy climbs out of the canal after a swim in Noor Muhammad Thaheem village, Thatta region, Sindh province, Pakistan, 2016. The canal is the only source of non-saline water accessible to villagers. Untreated water from the open source is used for everything from bathing to cooking and drinking. © WaterAid/Malin Fezehai