A firsthand account of the ongoing conflict in Ukraine 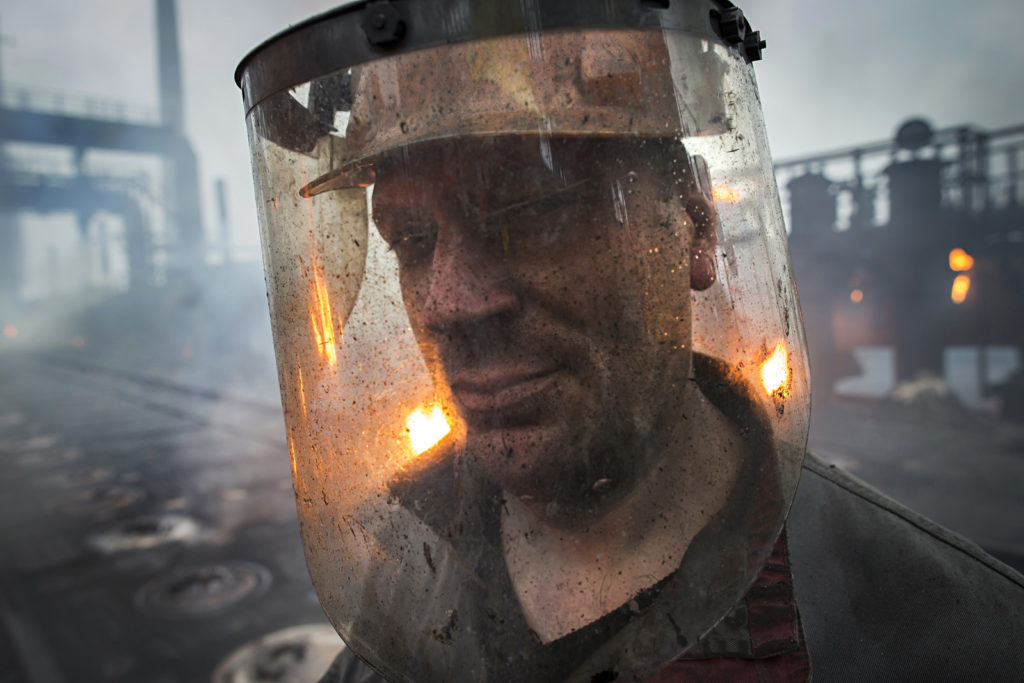 Worker on AKHZ (Avdiivka Coke & Chemical Plant) seen on the roof of the coke battery, Avdiivka, Ukraine, 22nd of October, 2015 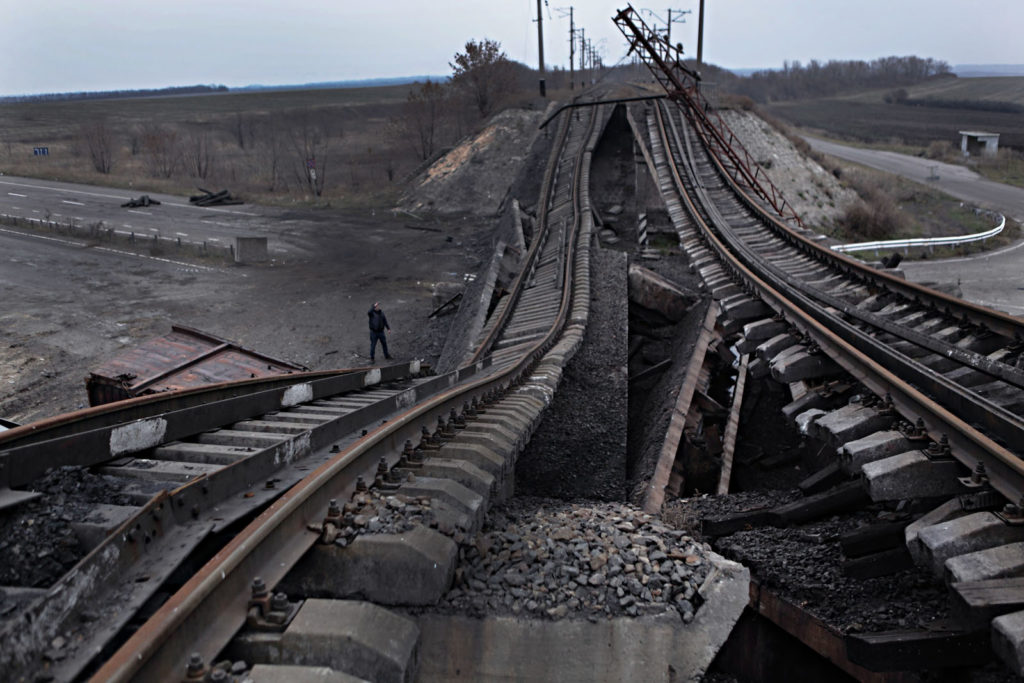 The railway bridge on Ukrainian held territory, blown up by the separatists, blocking the highway from Donetsk to Slovyansk. 60 % of the railways and the roads infrastructure have been destroyed in Donbass, as a result of civil war. Krasny Partizansk, Eastern Ukraine, 11th of November 2014.

The conflict in Ukraine comes on and off the international media spotlight, but whether there’s news about it or not, the tensions and armed fighting in the Donbas region never really cool off. Russian photographer Dmitri Beliakov’s Ukrainian Chronicles is an extensive documentation of this conflict and of the ongoing struggle that continues even after the cameras are turned off. Beliakov’s images might make you want to avert your eyes, but they are such a necessary account of how a conflict zone is more than just a news narrative, and of how terribly painful and rough war really is.

How long did you spend on the project? Did you travel to different locations?
‘I spent 18 weeks in the Donbas region in the beginning, in 2014. Then 14 weeks in 2015, and at this moment I have been in Donbas for the last ten days. I traveled across the entire area, both in the separatist-controlled republics and the so-called ATO-zone, where Ukrainian troops are.’ 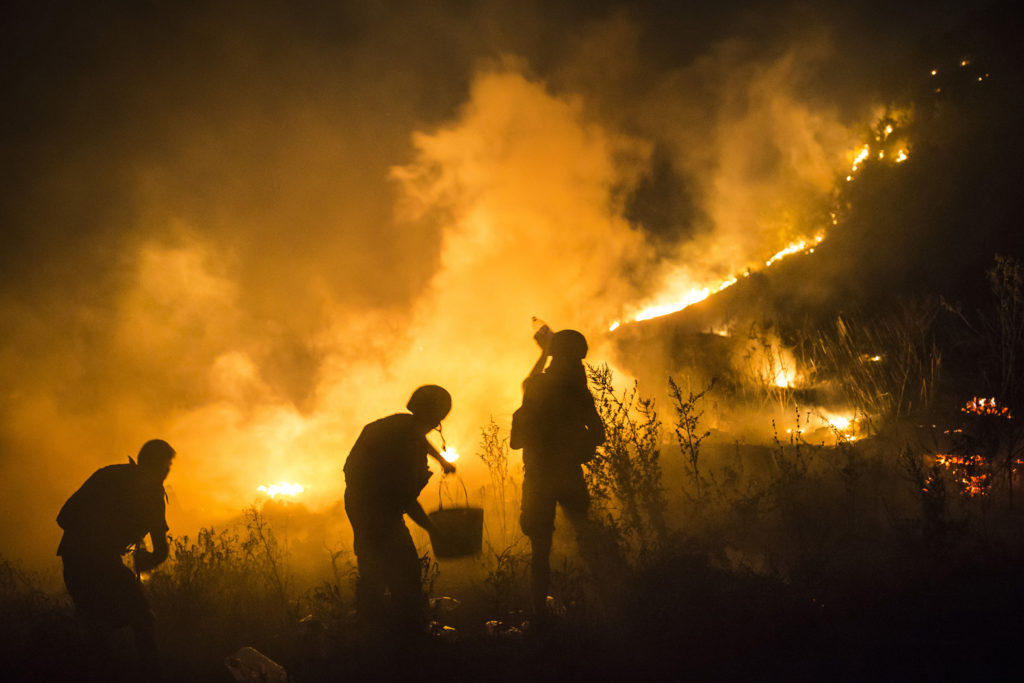 Ukrainian soldiers desperately try to put out the fire on their emplacement same time as battle between Ukrainian troops and the separatists intensifies, 22nd of August, 2016.

Can you describe a bit of the atmosphere in these places?
‘The Ukranian side is a western-oriented place with a strong Soviet legacy. Locals are ashamed of that and want to distance themselves from it. On the other side, the separatist-controlled areas they look towards the past, and identify themselves with their Soviet history, which they have now chosen as an old-new model. There is a lot of nostalgia for Lenin and Stalin, the old Soviet working class heroes are praised, the old Soviet celebrations with red flags are everywhere around. It is really like a trip back in time.’

You are Russian, how do people respond to you in the Ukrainian side?
‘The fact that I’m Russian is irrelevant. People are generally friendly, but in the end, finding your way around is a question of experience, contacts and relationships.’

What do you think it’s important for people to realize regarding the situation in Ukraine?
‘I think Ukraine, Russia and the West seem to not understand that the old Iron Curtain, which divided our cultures for nearly seventy years is up again. It is an Ukrainian Curtain and one word can sum up what is happening there now: chaos. And I think it becomes more and more clear that Ukraine is loosing this war, mainly because the government is reluctant to fight. Behind the formal patriotic propaganda, I can not see any real hope. There are huge problems on the frontline, the morale of the Ukrainian army is poor. Soldiers are under-equipped, under-supplied and under-paid, and they do not believe their president.’

What is the situation on the separatists’ side?
‘I met a lot of separatists in Crimea and Donbas, many of them were just criminals who thought they could become wealthy and powerful by stealing someone else’s property and driving people out through terror. They accuse the Ukrainian government of imposing Ukrainian language and of somehow putting obstacles in their lives, and that is just untrue. At this moment, just speaking Ukrainian gets you beaten up or jailed. They have mistreated Ukrainians, Crimeans and many Russian ethnics in a barbaric way.

‘I think many of the separatists are angry and frustrated because things didn’t work out the way Putin had promised them.  They realized that Donetsk and Luhansk aren not going to be integrated into the Russian Federation. Their existence is needed only to subvert Ukraine’s movement towards the West and to mess up the economy even further. They know now that they have been used as pawns by Putin.’ 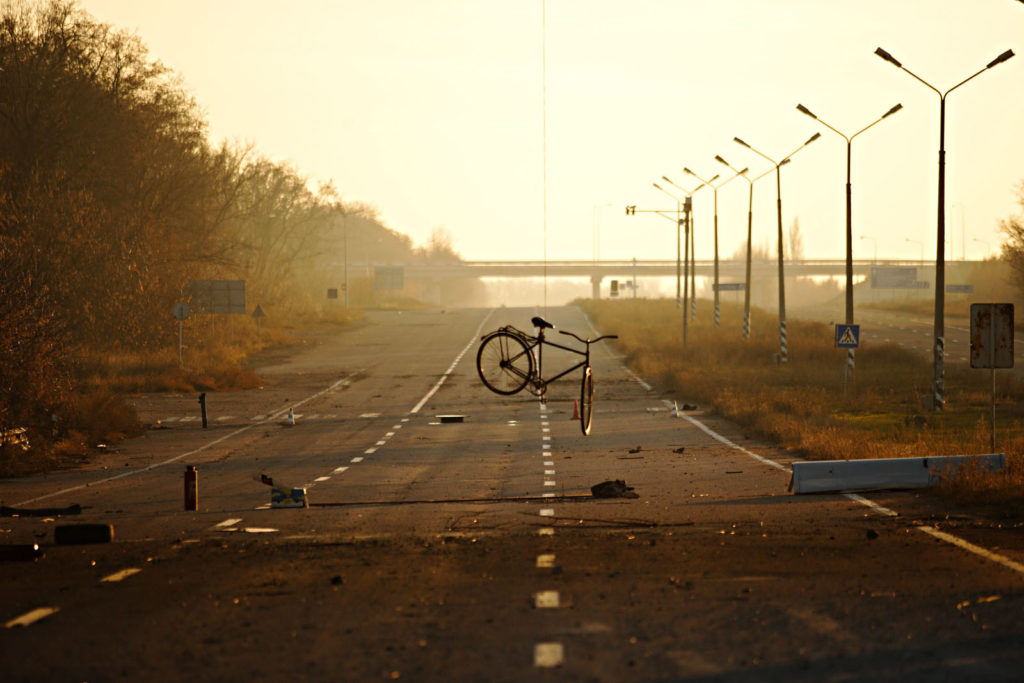 A bicycle hangs by a string from a bridge on rebel held territory on the main road to the Donetsk international airport, November 9 2014, Eastern Ukraine.

Why is this project important to you?
‘In short, I am Russian and Russia got involved into this war. Despite the claims from Kremlin that Russia offered no military support in this conflict, in fact Russian combatants, both professionally trained veterans and young conscripts did fight in Donbas. They killed and they died. Therefore as a professional photojournalist with 19 years in the field and experience photographing four conflicts, there is no other option but to be there. I cannot just turn away and pretend nothing ever happened. It is both a moral issue and personal issue for me, and also something related to my professional code.’ 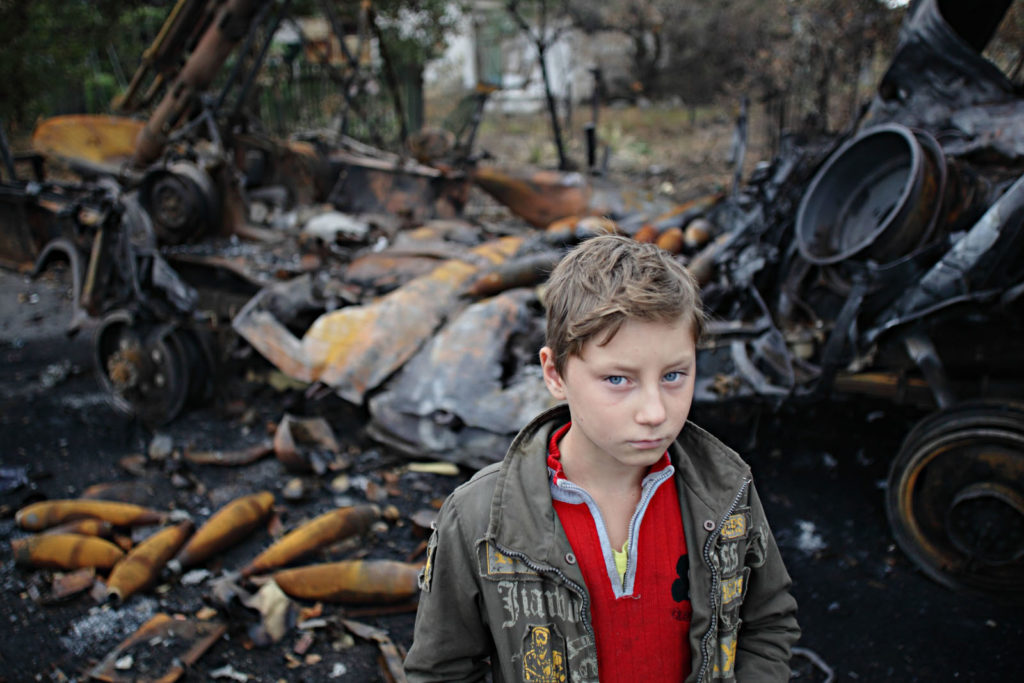 Artyom Bychkov, 10, seen beside a destroyed Ukrainian army truck, on Komsomolskaya street, 50 feet from his house. Novoekaterinovka is one of most heavily ruined Ukrainian villages as a result of conflict between Moscow-backed separatist fighters and the Ukrainian government, Novoekaterinovka, Eastern Ukraine, 9th of September 2014 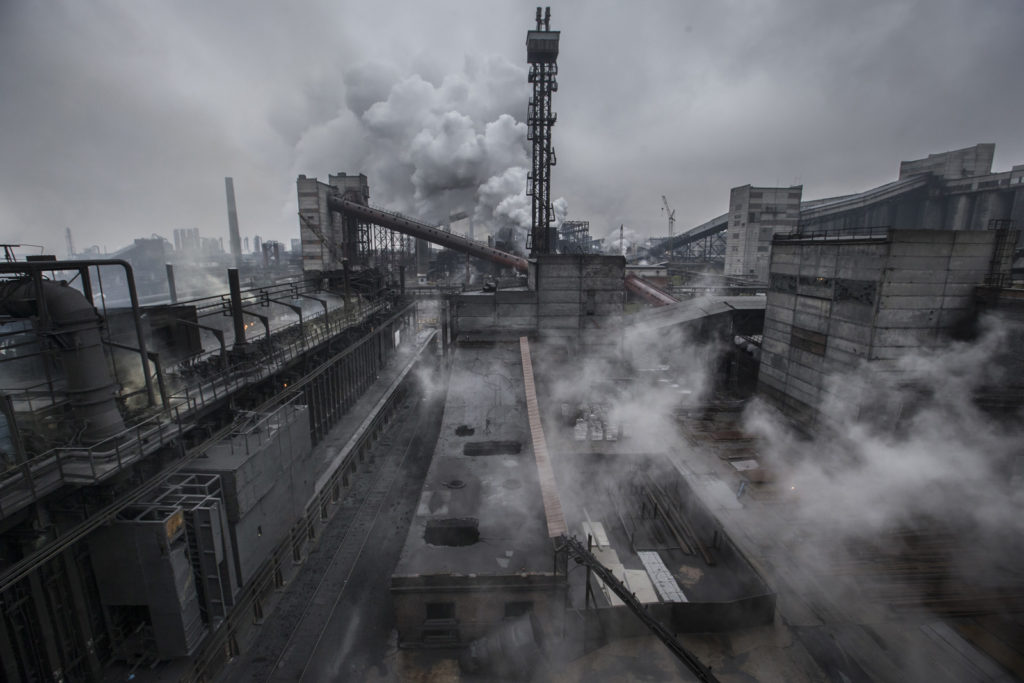 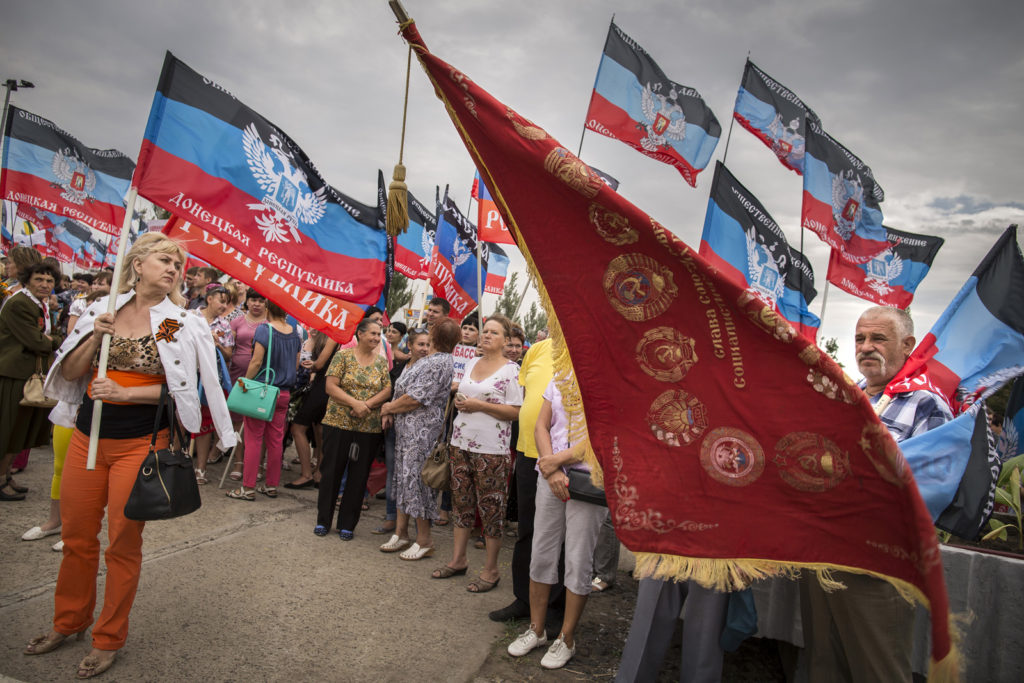 Remarkable & immediate addiction to the Soviet traditions and celebrations in Soviet style has stricken Donetsk People Republic. People holding Soviet and DNR flags at the Soviet era-style decorated official celebrations in anniversary of “2nd liberation of Donbas from the fascists.” 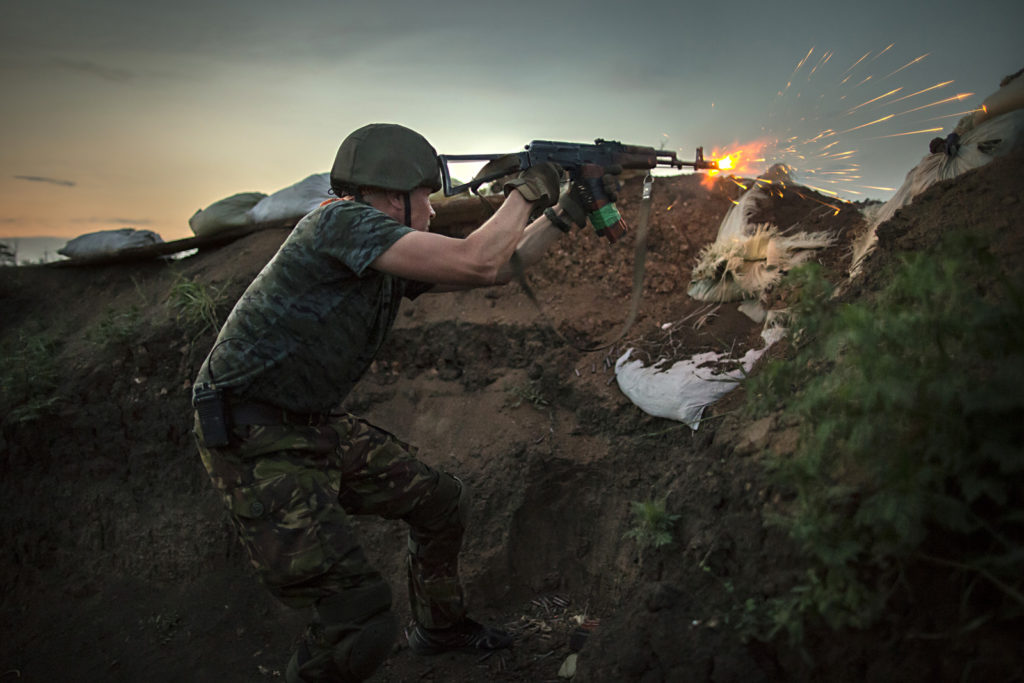 Ukrainian fighter engaged in battle with pro-Russian separatists on the frontline at Shirokino site. 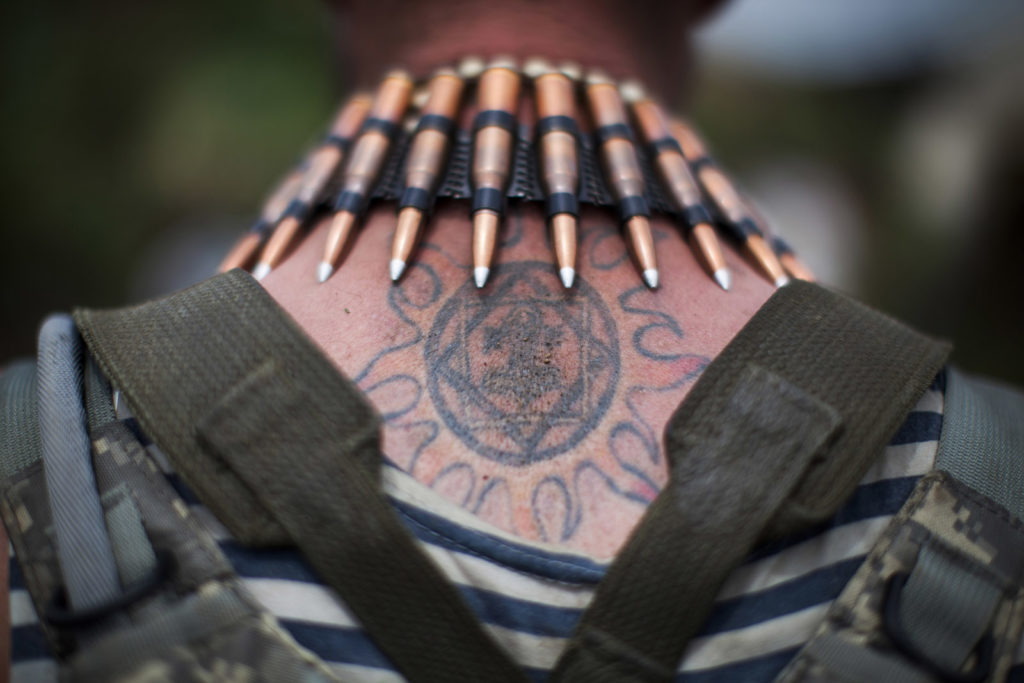 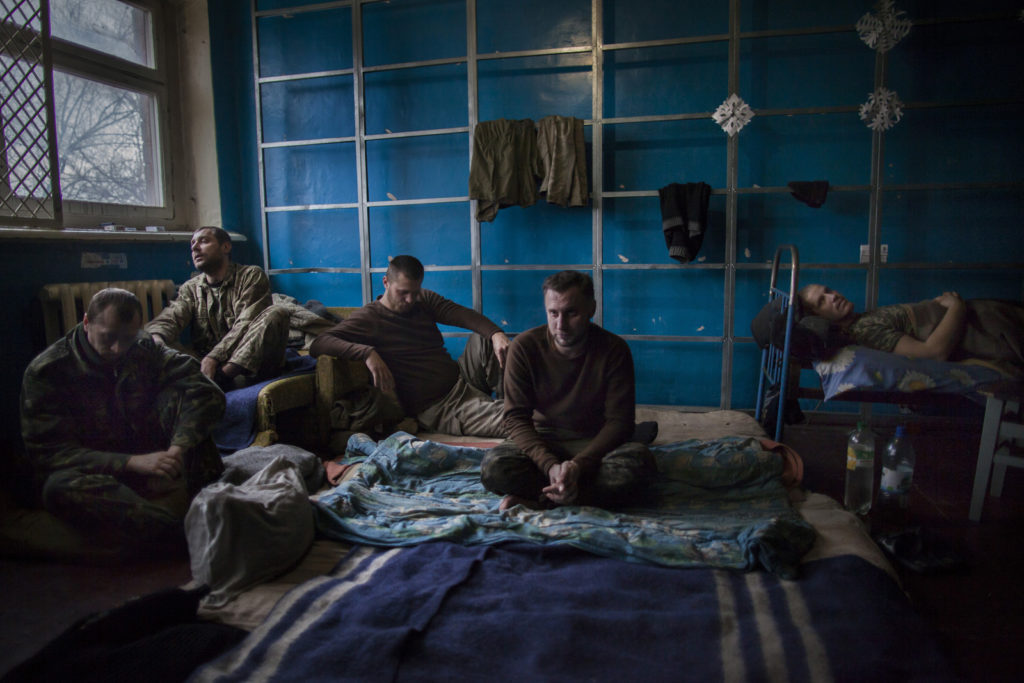 Ukrainian POWs on the pro-Russian separatist’s base in Donetsk. 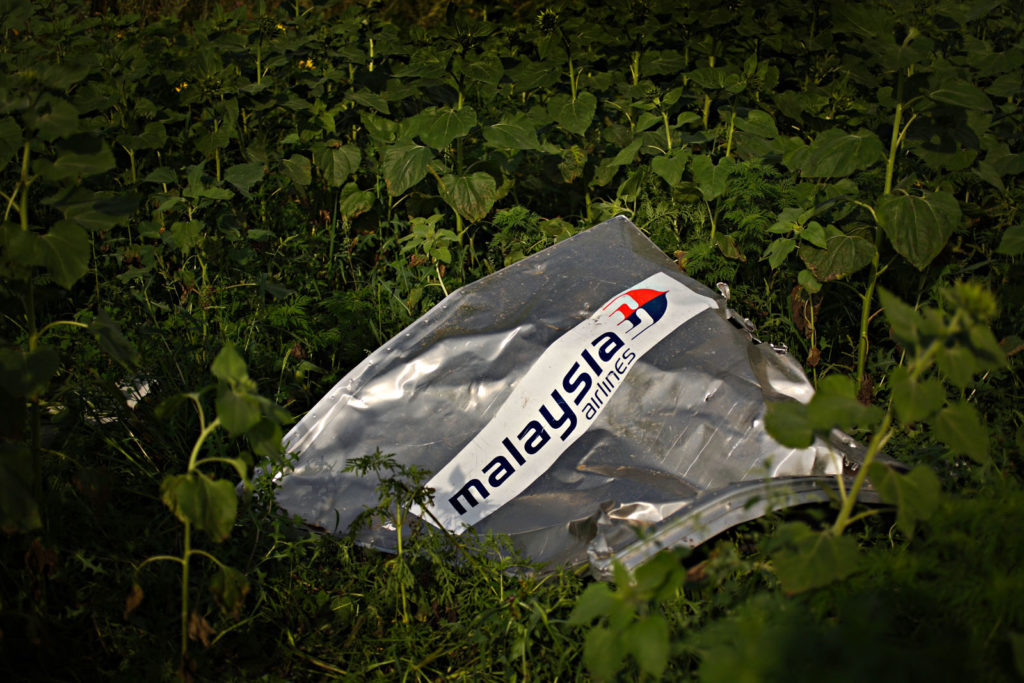 Parts of MH17 fuselage seen on the crash-site nearby Grabovoye village. 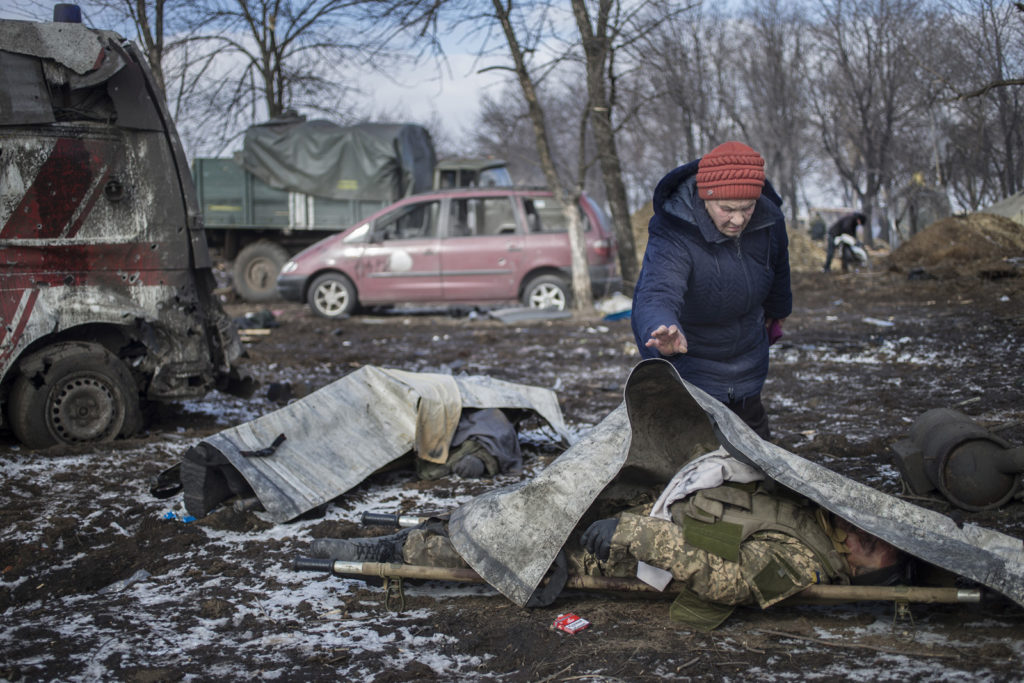 A resident of Debaltsevo Lyudmila, 66, covers body of the Ukrainian officer, abandoned on battlefield. The siege of strategically important railway junction Debaltsevo was one of the fiercest battles of the entire war in Eastern Ukraine. 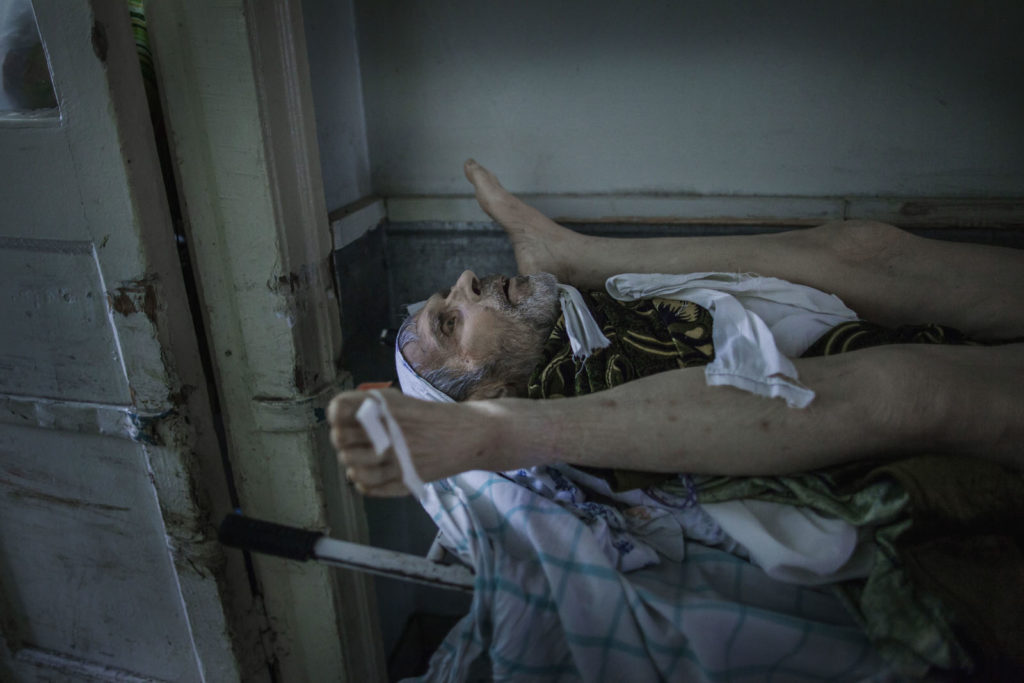 In a Donetsk morgue lie two neighbours, both pensioners, killed during a Ukrainian army artillery strike as they were collecting relief aid. 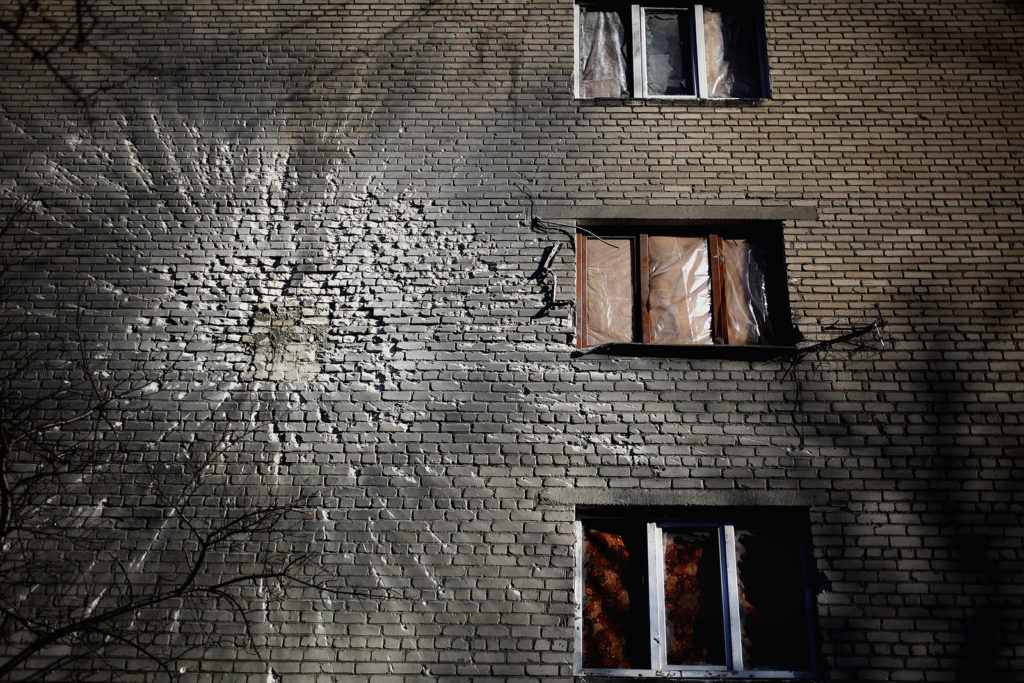 A house damaged by artillery. 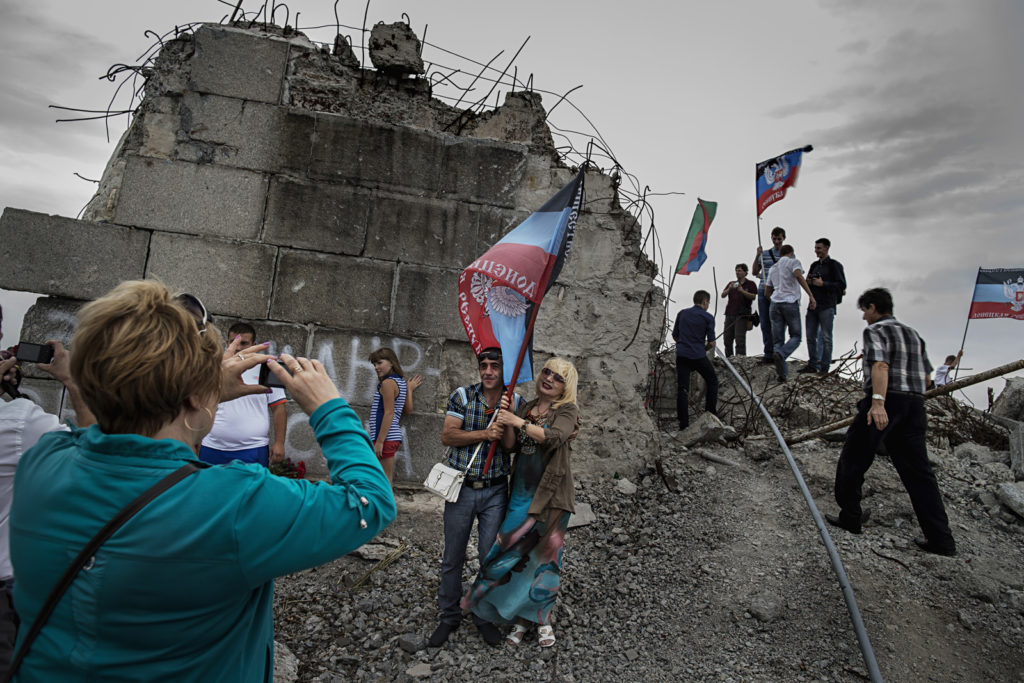 DNR activists seen taking selfies at the ruin of a WWII war memorial, heavily destroyed at the time of the battle for commanding heights between Ukrainian army and the Russian-backed separatists. The Soviet-style decorated official celebrations in anniversary of “2nd liberation of Donbas from the fascists” were organized to seal the victory of the Russian-backed separatists over Ukrainian army. 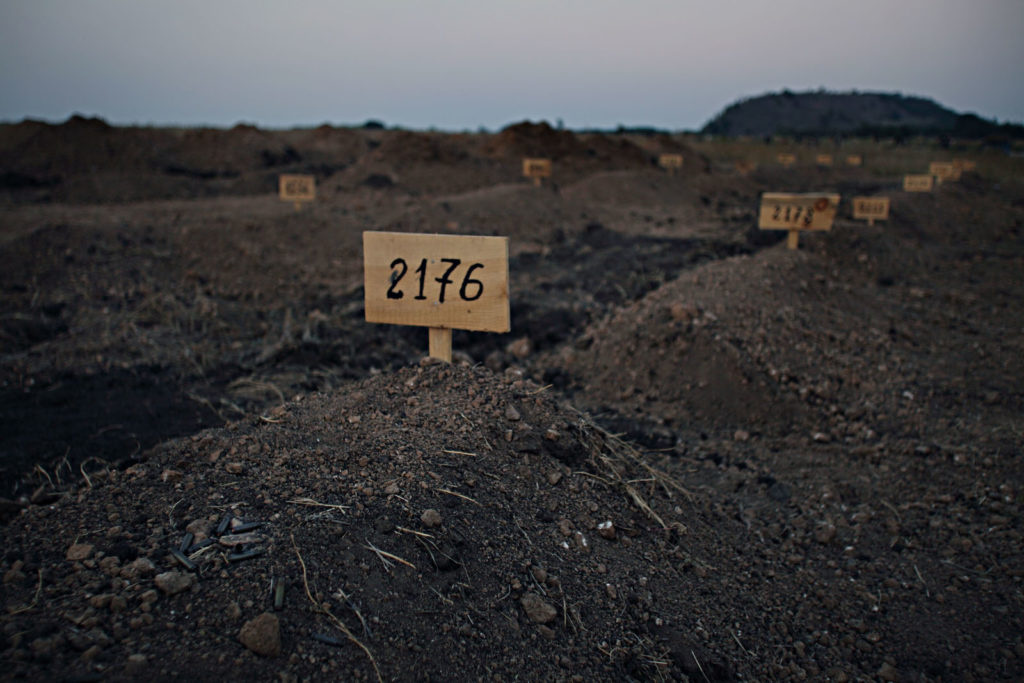 Only the numbers are seen on the nameless graves in the outskirts of Donetsk. 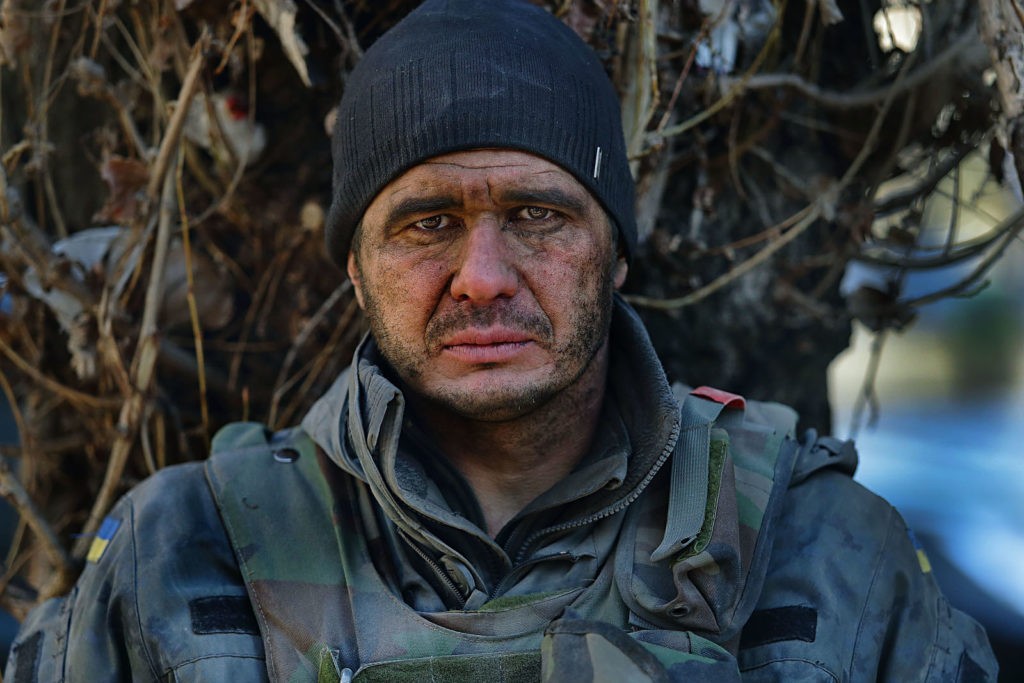 A Ukrainian soldier seen after breaking out of a siege by pro-Moscow separatists in Debaltsevo. The battle for strategically important railway junction Debaltsevo was one of the fiercest of the entire war in Eastern Ukraine and resulted in a defeat for the Ukrainian army. 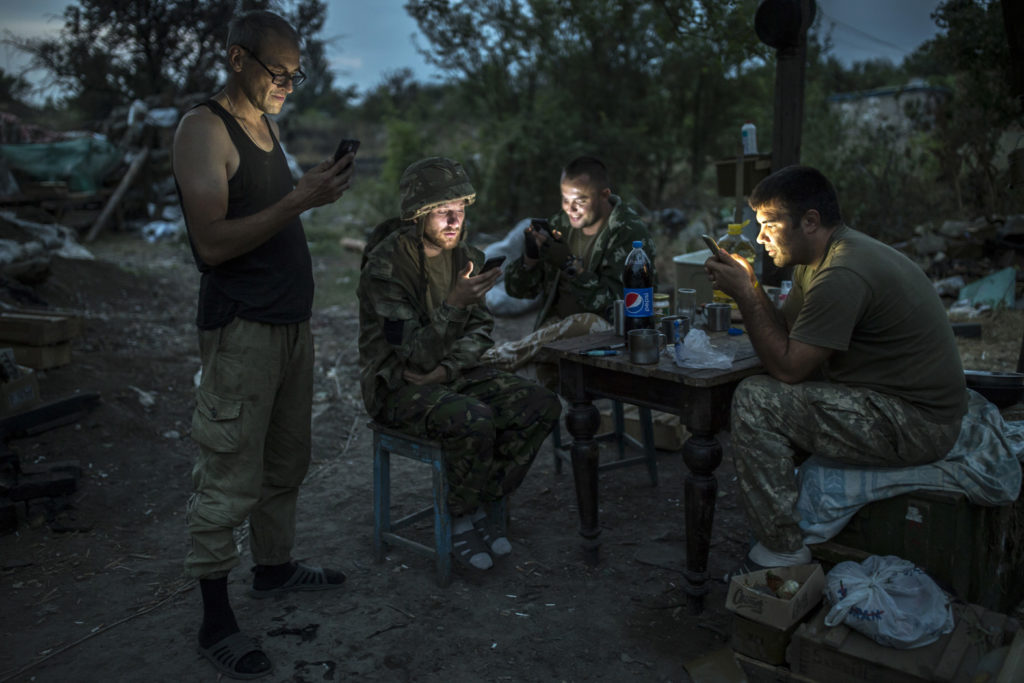