A Look at the Lives of Transgender Women in Indonesia 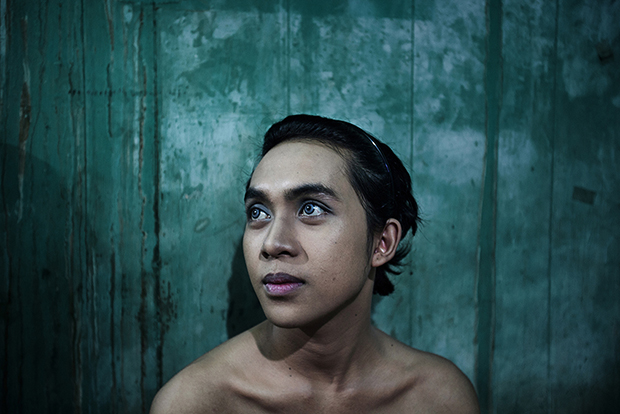 A young transgender woman puts make up on in her bedroom at Mami Joyce’s house. 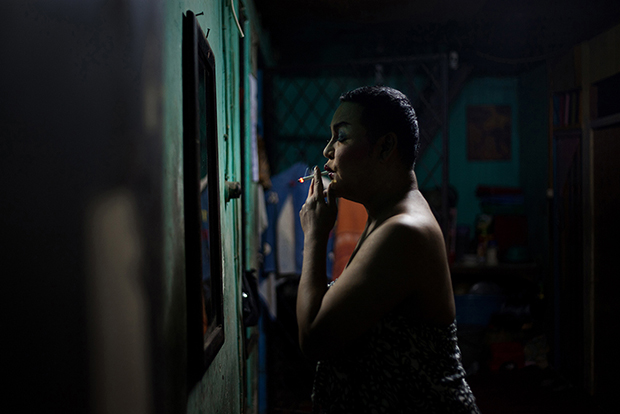 Mami Joyce takes a cigarette break halfway through the make up process.

In the heart of Jakarta’s bustling business district, says Italian-born photographer Giorgio Taraschi, Mami Joyce and her girls make their home. Taking in those as young as eighteen, the human rights activist has built a safe haven for transgender women—or “waria,” as they are often called in Indonesia—to call their own.

Taraschi and journalist colleague Alessandro Ursic met Mami Joyce in 2013 after documenting life inside a retirement home run by fellow activist Mami Yuli. These two women, Joyce and Yuli, are part of a generation that suffered greatly with prejudice, misconceptions, and the spread of HIV/AIDS. They saw loved ones die, and that trauma has fueled Joyce’s impassioned work with younger women.

At the time of the photographer’s visit, Joyce’s two-story hotel housed some twenty women, all transgender, between the ages of 18 and 30-something. Some made their way as sex workers, but each of them had “dreams of quitting soon.” Three years later, he adds, “some might have already.” The industry often seems like the only path available to waria; there’s still discrimination in the workplace.

What makes Mami Joyce’s hotel special is that she’s constantly looking out for the girls. She keeps sexual education materials around the house, and she keeps a steady supply of condoms. Under her care, the women are kept as safe as possible until they can make their dreams come true.

When Taraschi entered the hotel, he understood the sensitivity of the story he was about to tell: “Sometimes we end up having the privilege of telling stories and photographing people and places we’ll most likely never encounter again.” He spent time with the girls without the camera at first, smoking cigarettes and chatting. When he smiled, he says, the girls let down their guard and let him into their lives.

Unfortunately, these young women have a rocky road ahead, one that is paved in part by hatred and stigma. Until 2011, being transgender was classified as a mental illness, and groups like the Islamic Defenders Front have not been kind to progress. The photojournalist explains, “most of these people who harass them during the day, become their clients at night.” One hotel resident told him about a client who, after spending the night, turned around and hurled bottles of urine at her.

Still, Taraschi saw in Joyce and her chosen family persistence and strength. He saw Mami Joyce in Amsterdam in 2014 after his series Hotel Waria won the title Pride Photo Award First Prize Documentary, and he’s sad he hasn’t seen her since. He does, however, have it on good authority that the hotel still stands, and Mami Joyce continues to look out for her girls. 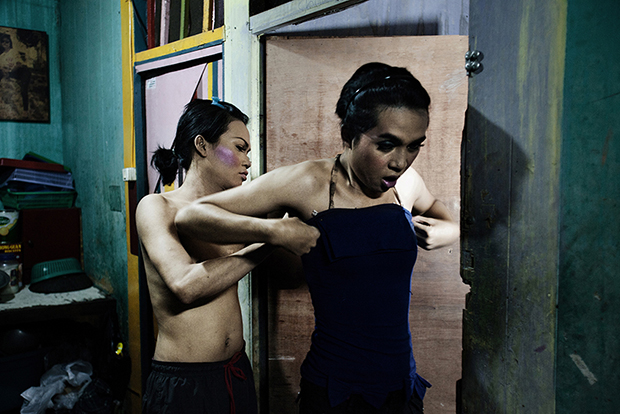 Selvie helps her friend dress up for the night. 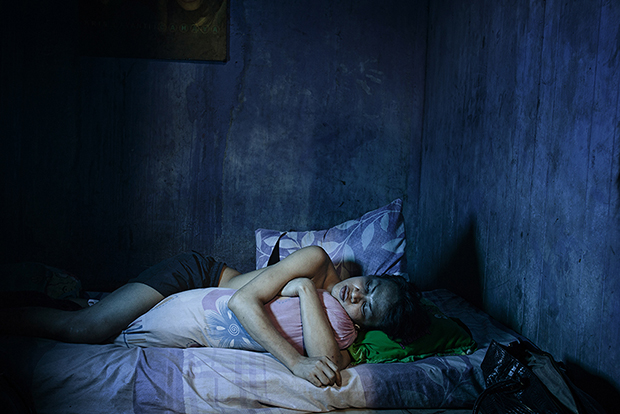 Selvie watches TV in her bedroom on an early Saturday evening. 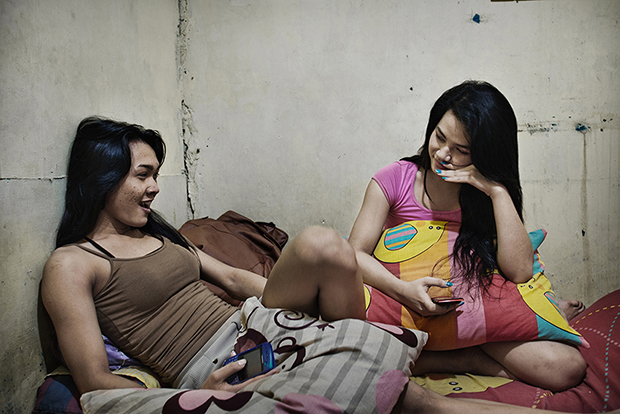 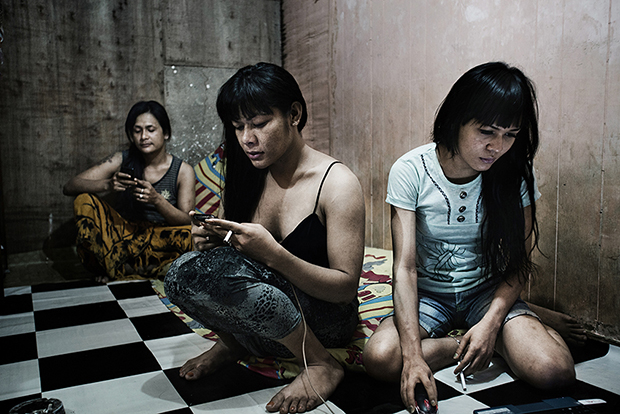 Ajurn and her roomates talk to clients through mobile apps. Internet dating is becoming more and more common in the waria community, and the profit can be ten times higher than the “street fee.” 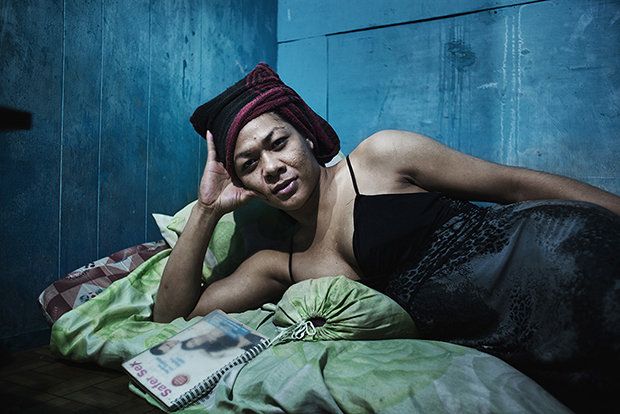 Jane lies on the bed in her bedroom while reading a sexual awarness book provided by Mami Joyce. 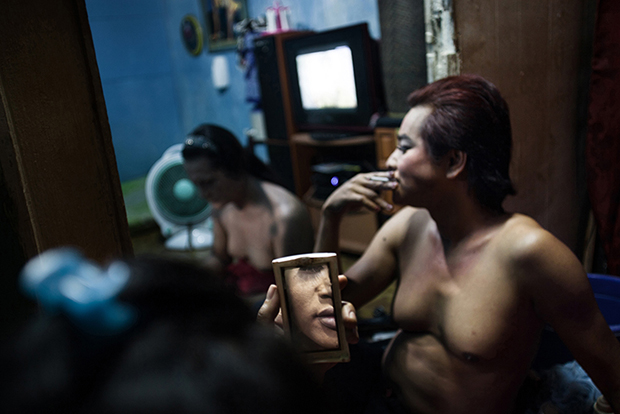 Getting ready for a Saturday night’s shift at Mami Joyce’s house. 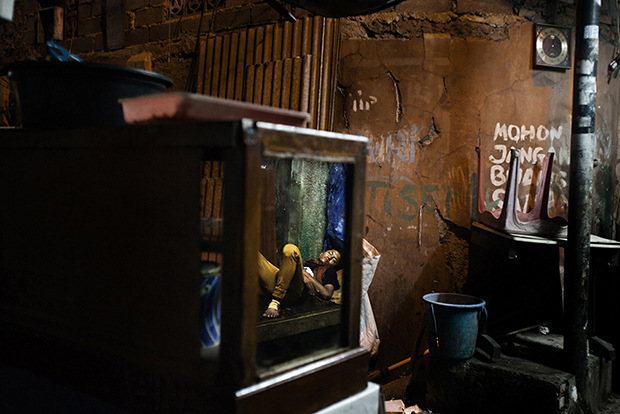 A client waiting outside the Mami Joyce’s house.