An Unforgettable Look at Life with an Eating Disorder 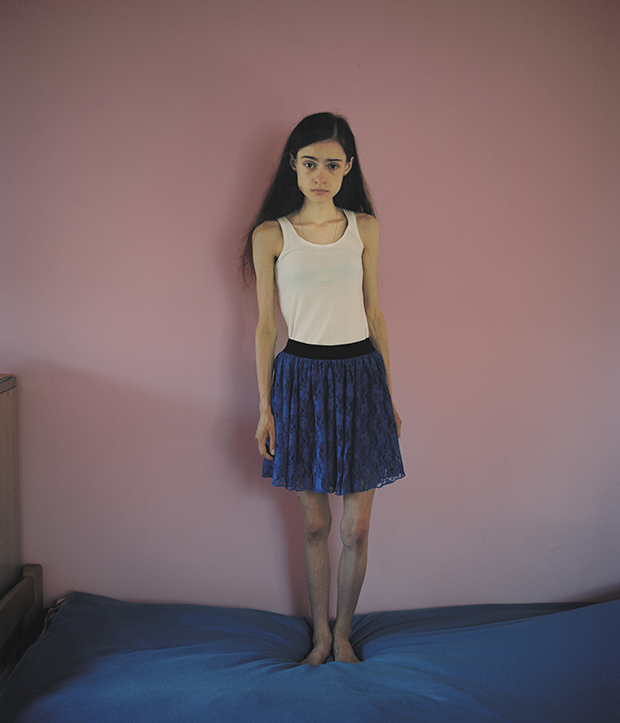 Ania (16) is in her room that she shares with two of the other girls. “I actually had no idea that they photoshopped the models in magazines – or that people from Hollywood often had had plastic surgery.” © Marie Hald/Moment/INSTITUTE

It has a name, says Danish photographer Marie Hald. The girls who suffer from anorexia call it “Ana,” and “Ana” is a very real presence in their lives, one that speaks to them, manipulates them, and puts their lives in jeopardy. The Girls of Malawa tells the story of young women battling eating disorders, documenting life in a six-week treatment program in a little Polish village.

Hald discovered the therapeutic facility, “a little yellow house” called Drzewo Zycia (or Tree of Life), by way of a fixer while visiting Poland. She was granted permission to visit by the leader of the home and was astonished to find how readily she was accepted into the lives of her protagonists. She lived with them, ate the required six meals with them, and learned from them. Throughout the days, she heard them cry, and she heard them sing. They attended therapy sessions, and at night, when the girls were sent upstairs for bath time and lights out, Hald went with them.

Although many of the therapists and teachers at the facility weren’t able to speak much English, the photographer formed close bonds with the girls themselves, who were expressive, kindhearted, and candid. They confided in her, and they mourned with her. They trusted her to take their pictures as a warning to others to avoid “taking their course,” as a plea for awareness and understanding, and as a way of showing those struggling with the illness that they are not alone.

“Eating disorders,” explains Hald, “are not only about being thin.” They can come from a yearning for control and a wish to impose order in a world that so often seems chaotic and confusing. The disorder permeates and wreaks havoc on every facet of daily life. The photographer herself could in some ways identify with that dangerous striving for something unattainable; “I could see my younger self so much in them,” she admits.

“It’s a rocky road to recovery,” confesses Hald, and it’s still unclear what lies ahead for the girls of Malawa. The “voice” of “Ana” is persistent, and overcoming it requires constant courage and diligence. The photographer likens it to a brutal war, only it’s one fought internally. Some suffering from the illness go on to lead happy, healthy lives; others die, their hearts failing due to lack of food.

No matter what happens, the photographer understands the importance of her images. The subject is a painful, often uncomfortable one, but it’s one that needs to be recognized. More than anything, Hald carries with her a profound pride in the girls with whom she collaborated, the individuals who allowed her to witness them at their most vulnerable. Never once did she feel like a photographer; she was simply a human being who cared about the wellbeing of her fellows.

The Girls of Malawa is represented by THE STORY INSTITUTE. 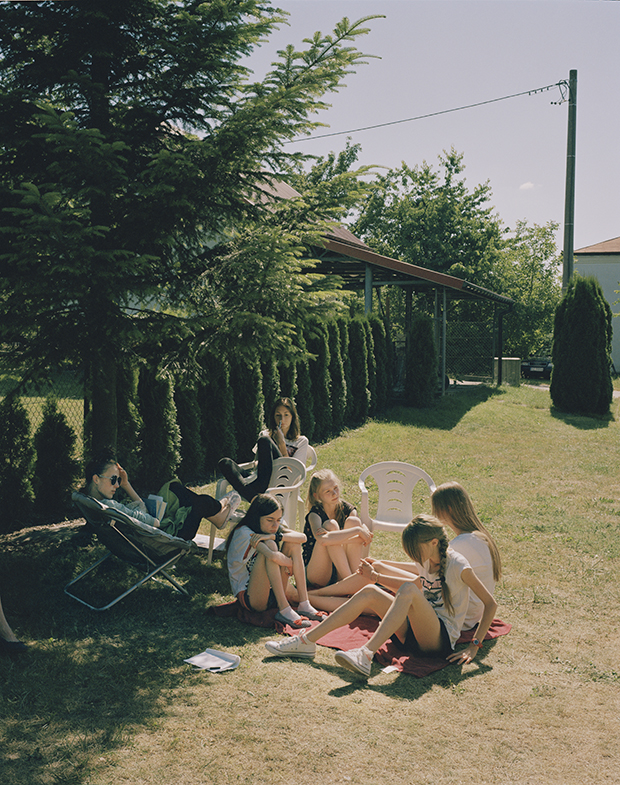 It is 34 degrees C, and Kaia, Karolina, Ania, Carolina, Agata and Nikola are sitting outside the house they call their home for the summer. The breaks between meals and therapy are often spent on blankets on the grass. The home Drzewo Zycia was originally started by the headmistress Ella. Ella’s daughter had an eating disorder and in lack of good treatment in Poland, and Ella started her own treatment home based on an American treatment philosophy. © Marie Hald/Moment/INSTITUTE 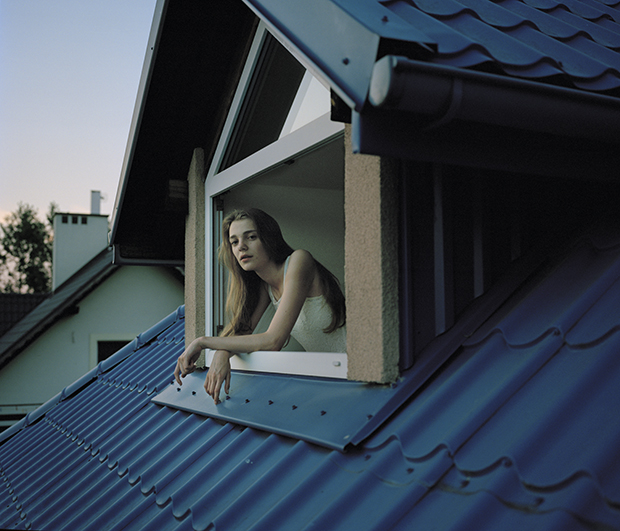 Agata (17) has suffered from anorexia for the last two years. “It all started in biology, where we were taught about healthy food and calories. I liked the control I felt after losing my first three kilos. I felt isolated and had trouble talking about my feelings. For some reason, I thought losing weight would help me make new friends. And then it slowly started: I liked the feeling of hunger – it made me feel so strong. Never before had I lied to my parents, but quickly I was involved with a whole cavalcade of lies and stories.” © Marie Hald/Moment/INSTITUTE 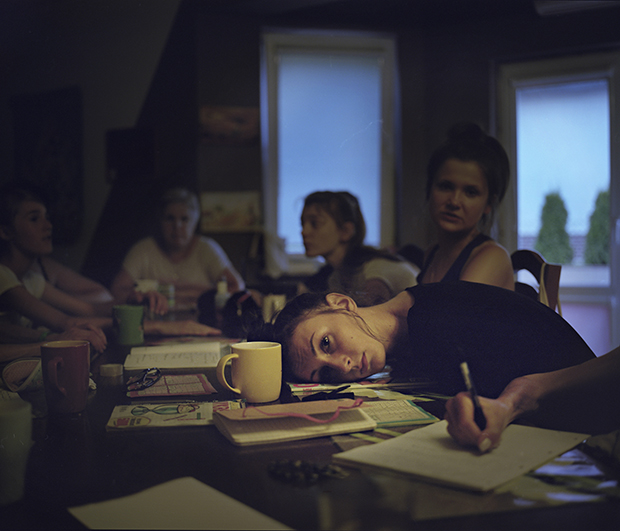 Karolina (18) lays her head on the table, while other girls read or solve crossword puzzles. © Marie Hald/Moment/INSTITUTE 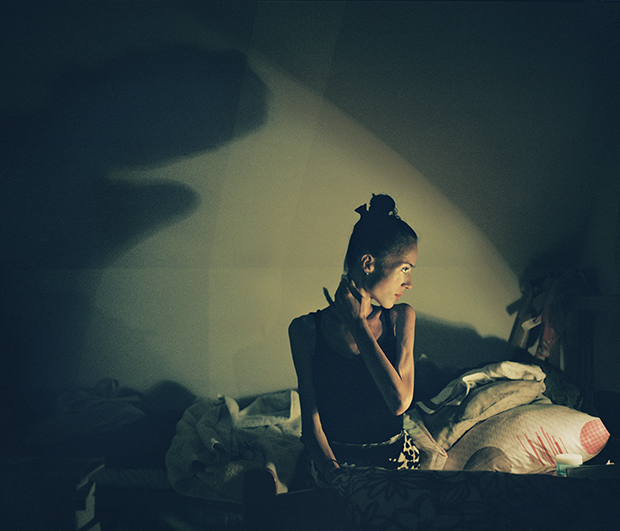 “Inside of me is a shadow side. I call her Ana.” Kaia (19) imagines a voice in her head that is anorexia. She tells her how bad and weak she is for eating her food, and how ugly she will become when she gains weight. © Marie Hald/Moment/INSTITUTE 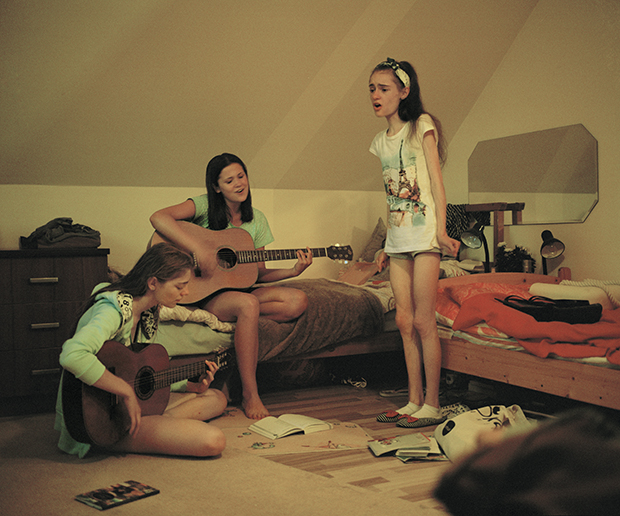 After the last meal, the girls are allowed to stay in the upstairs dorms, where they sleep in rooms of three beds. Agata and Wiktoria are playing guitar while Ania sings. All three are big fans of the American singer Demi Lovato, who suffered from an eating disorder herself. When Ania feels sad, singing or listening to her music helps her. A common characteristic for all the girls in the house is the fact that they are all diligent, people pleasers and often have top grades in school. © Marie Hald/Moment/INSTITUTE 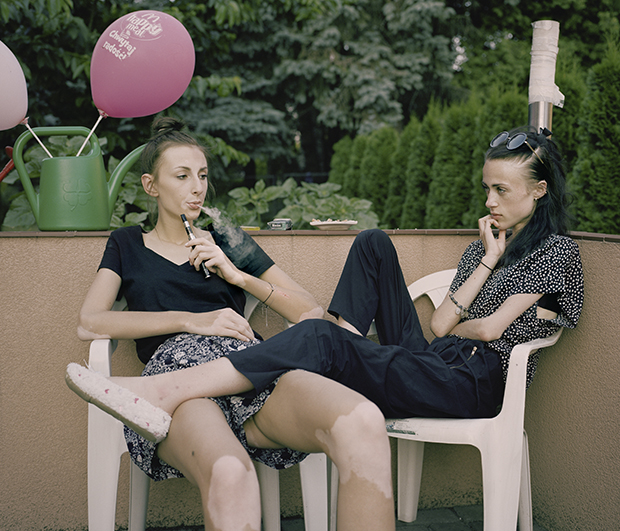 Karolina (18) and Kaia (19) quickly became friends after meeting on the morning of their first day in the house. Both girls have been hospitalized previously, Karolina for bulimia and Kaia for anorexia. After the final meal of the day, they have developed a routine of coffee and cigarettes before bed. © Marie Hald/Moment/INSTITUTE 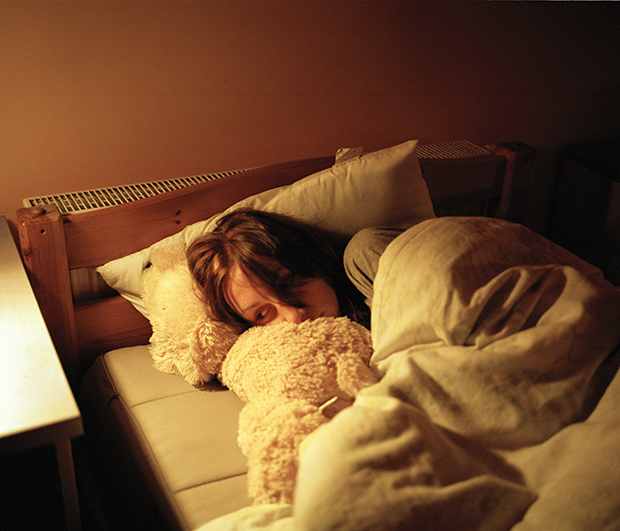 The lights are turned off at 10 PM. Karolina sleeps with a teddy bear. © Marie Hald/Moment/INSTITUTE 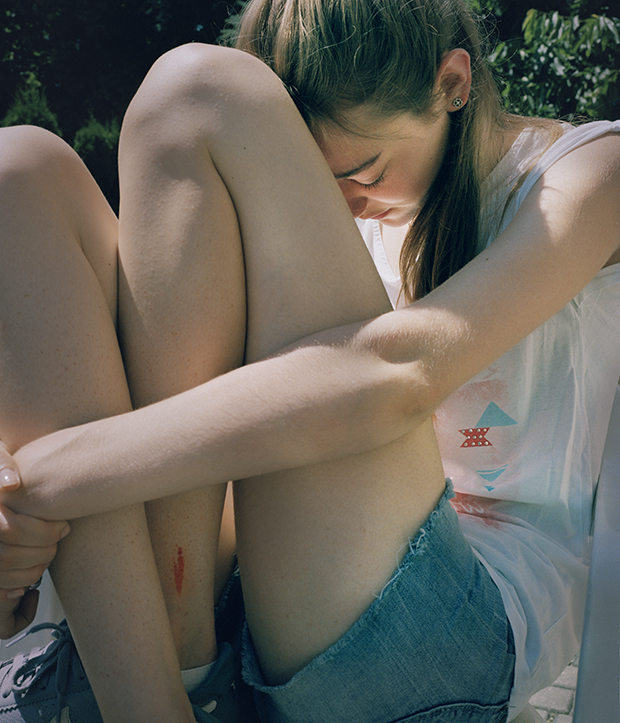 On the grass after breakfast. Agata reads a lot of books while staying at Drzewo Zycia. She is anxious about getting well and tries to focus on her goals in life. She wants to become a photographer and to see Adele in concert. © Marie Hald/Moment/INSTITUTE 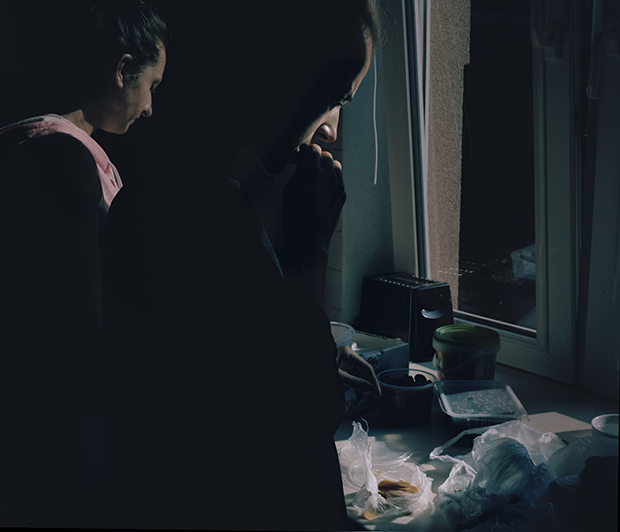 Breakfast is the only meal where the girls can choose what they eat. Kaia struggles to choose which toppings to put on her yogurt. © Marie Hald/Moment/INSTITUTE 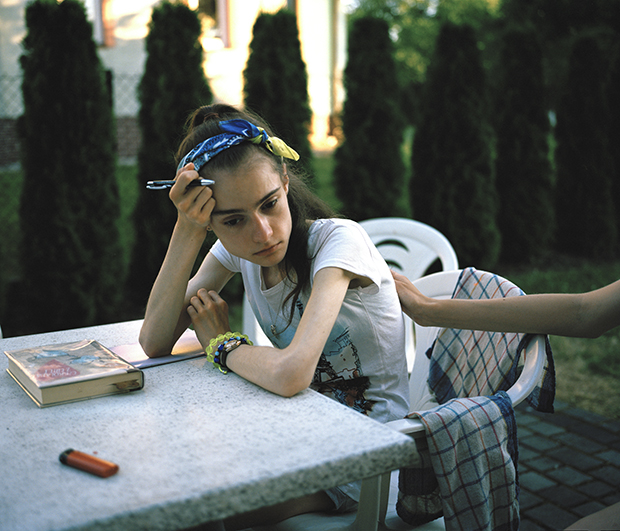 Ania sits outside and writes in her journal. She misses everyone back home. © Marie Hald/Moment/INSTITUTE 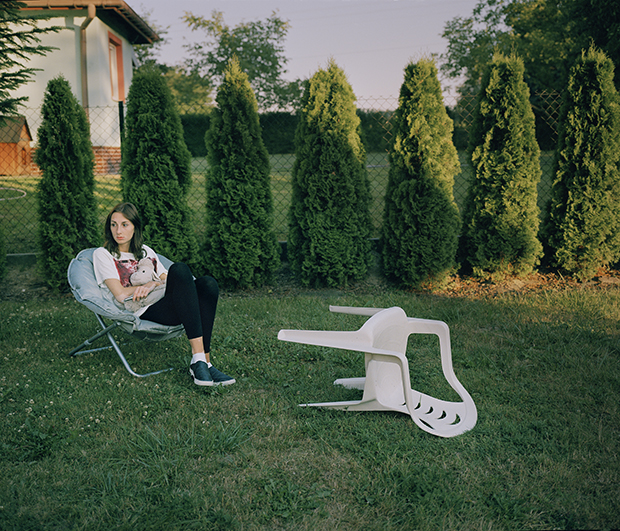 Karolina (18) sits with her teddy bear before dinner time. Using mobile phones is only allowed for two hours a week, and she misses her boyfriend and her parents. © Marie Hald/Moment/INSTITUTE 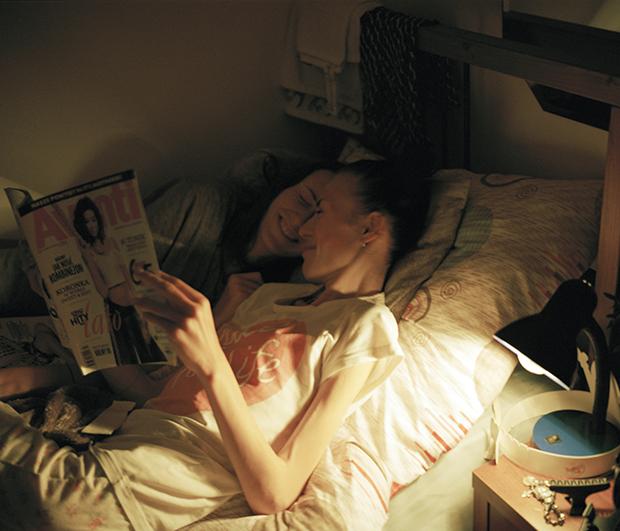 One night, Kaia (19) and Karolina (18) sneek into the same bed and read magazines. In the morning, Karolina goes to her own bed before the nurses notice. © Marie Hald/Moment/INSTITUTE 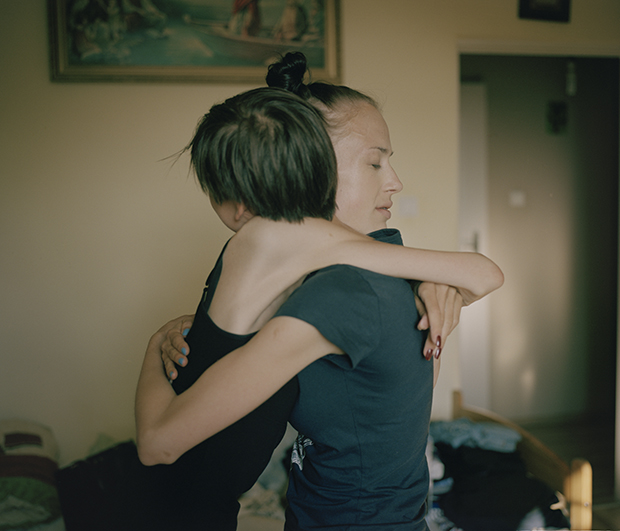 It is the last day in Drzewo Zycia for Kaia (19) and Natalia (17). Kaia feels nervous about leaving Malawa, worried about a life without the daily scheduled meals and therapy. She has decided to move to her father’s place. Her mom’s house was where the disease first began, and she worries that going back would cause too many bad memories. © Marie Hald/Moment/INSTITUTE