The Killing of Women in Juarez, Mexico 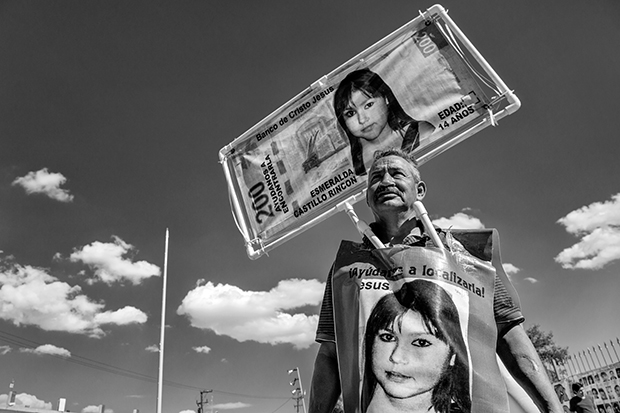 Jose Luis Castillo is arguably the most vocal and controversial activist in the Juarez anti-femicide movement. He can be seen all over the city wearing a set of homemade banners with the image of his daughter Esmeralda Castillo Rincon. Esmeralda disappeared in 2009 at the age of 14, just before her quinceañera. Ciudad Juarez, Mexico. Nov. 2, 2014. 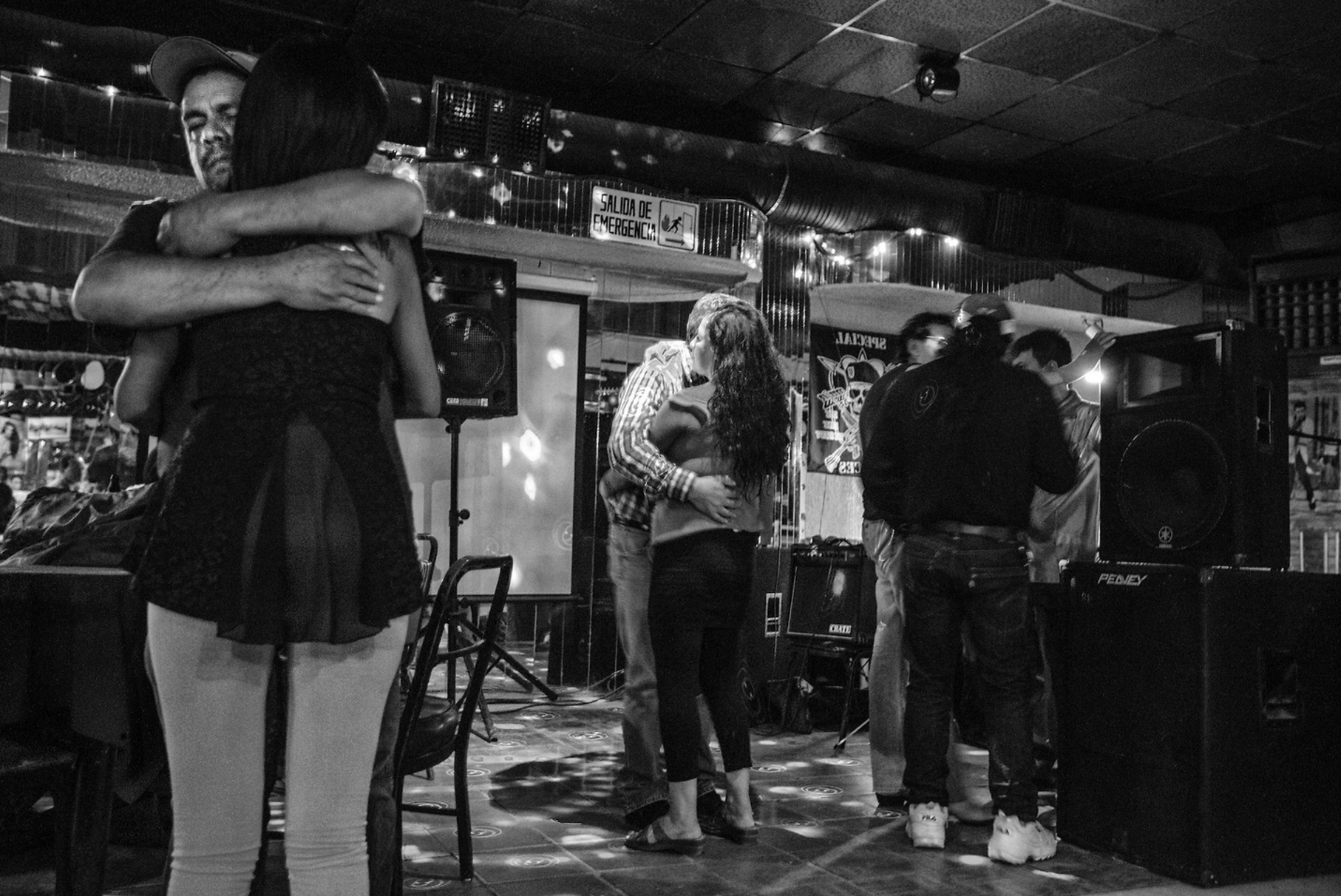 Inside one of the many bars where prostitution is practiced openly. It is in places like this that many of the young women are last reportedly seen alive. Ciudad Juarez, Mexico. Nov. 2, 2014.

Femicide, broadly defined as the killing of women, is alarmingly common in the border town of Juarez in Mexico; according to Amnesty International, between 1993 and 2005 around 370 women are reported to have suffered violent deaths, and this figure has doubled between 2005 to 2011. Often motivated by robbery, gang wars, and sometimes coinciding with sexual assault, Ana Güezmes, the local representative of United Nations Women told Al Jazeera that “Femicides are a pandemic in Mexico”. This phenomena has gained international recognition in recent years, largely down to the absence of government intervention, though it was a topic which lacked visual representation until recently. Growing up in the Los Angeles area, photographer Gabriel Romero had for years known about the murders of young women in Juarez, though he hadn’t visited the place personally until 2014. It was then that he started to learn about the horrific reality of femicide in this part of the world. The families of the deceased are desperate for information from a government that has done very little to stop this culture of violence.

The majority of those targeted are poor and dark-skinned, according to the female rights activist Esther Chávez Cano who started recording and investigating these disturbing deaths back in 1993. She founded Grupo 8 de Marzo (8th of March group) the year before, in response to the discovery of numerous female bodies which were dumped in local cotton fields and deserts. These bodies were often found mutilated, sometimes with the nipples cut off. It appeared to Esther that the female body was considered a disposable commodity to the violent macho gang culture found in and around Juarez.

Through Lost Daughters of Juarez the photographer’s principle objective was to document the struggle and quest for justice of those affected by violence against women, while also conveying to the viewer the historical context of this crisis. It is difficult to abstain from sentimentality given the gravity of this subject matter, yet Gabriel wanted to avoid creating a tear-jerker: “It was important for me to not show these men and women as victims. I wanted to show them as proud and courageous people”.

In order to photograph these people in the manner which best captured their bravery and perseverance, the photographer recognised the importance of connecting with his subjects, both physically and emotionally. He captured this story using a wide-angle lens and rarely used a telephoto: “I feel that the extensive use of telephoto lenses in photojournalism seems a little voyeuristic, whereas getting physically close to the subjects helps convey intimacy to the viewer. It’s intimacy and the capturing of decisive moments that I feel are the cornerstone to this genre of photography”.

As one might imagine, undertaking a project like this is an incredibly dangerous feat. “I was constantly watching my back, but this was tempered by the thought that this was a story that needs to be told” explains Gabriel, “I always relied on the knowledge of local personnel on the ground”.

While the photographer believes that “no story is ever finished”, he doesn’t intend on returning to photograph the individuals involved in this project. His goal instead is to help enlighten the uninformed about the injustices that these people endure daily through his existing body of work: “These issues don’t just come from the murderers, but from the indifference of their own government”. 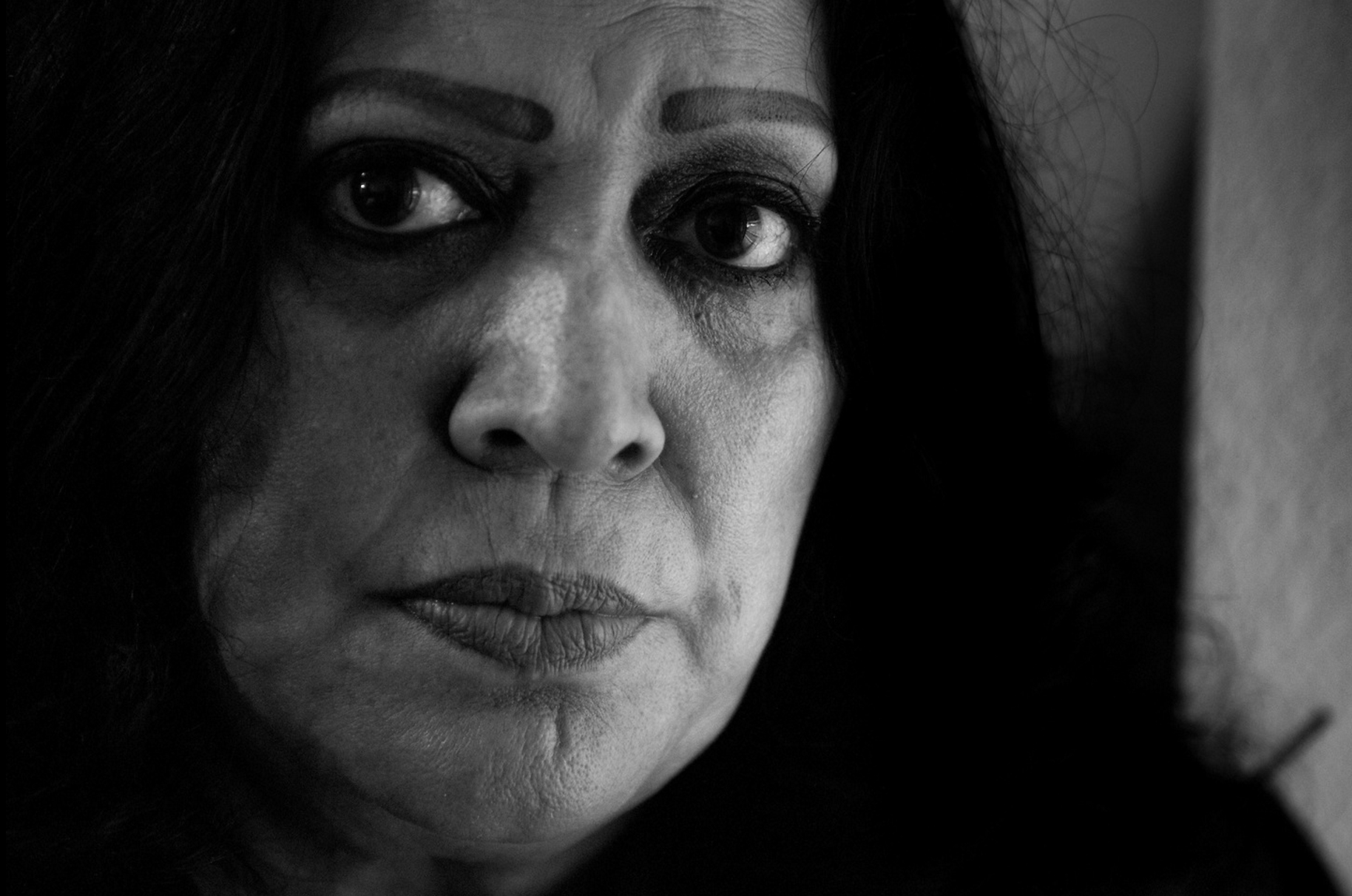 Maricela Ortiz Rivera has been one of the most vocal activists in the anti-femicide movement. She founded Nuestras Hijas de Regreso a Casa or “Our Daughters Return Home,” a non-governmental organization whose goal is to prevent the murders of women in Juarez. Unfortunately, she has paid a heavy price for her activism. In 2009 her son-in-law was murdered, followed by her brother in 2013. She has since fled Mexico and sought asylum in the United States. Undisclosed location. Sept. 24, 2014. 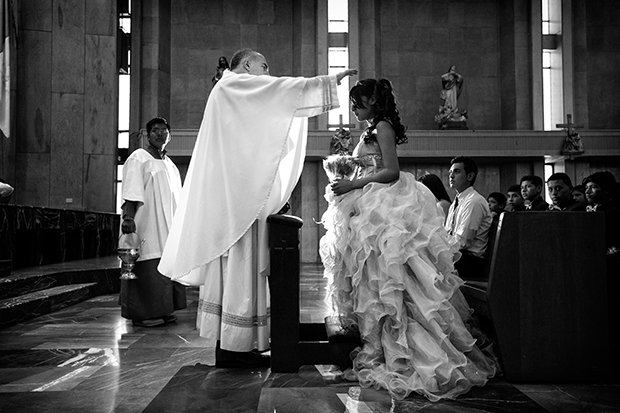 During a thanksgiving mass, Father Eduardo Hayen Cuarón blesses a young woman on the day of her quinceañera, which is a celebration of her 15th birthday. This is a significant moment in the life of a young Mexican woman. Unfortunately, many of the young women that are victims of trafficking and femicide never get to experience their quinceañeras as so many of them have disappeared before the age of 15. Ciudad Juarez, Mexico. May 23, 2015. 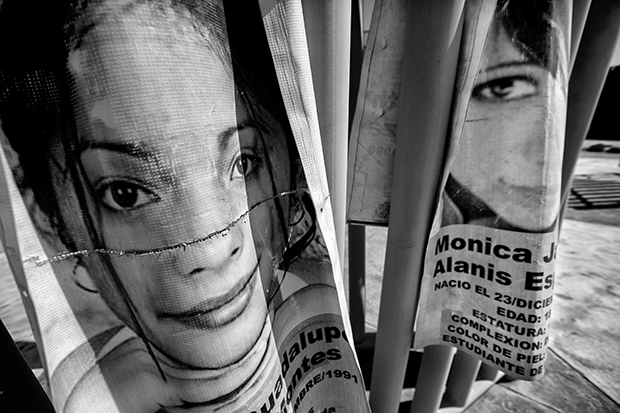 In Juarez, one is constantly reminded of the missing. The faces of the innocent confront the unaware eye, pleading from beyond for help. Ciudad Juarez, Mexico. Sept. 28, 2014. 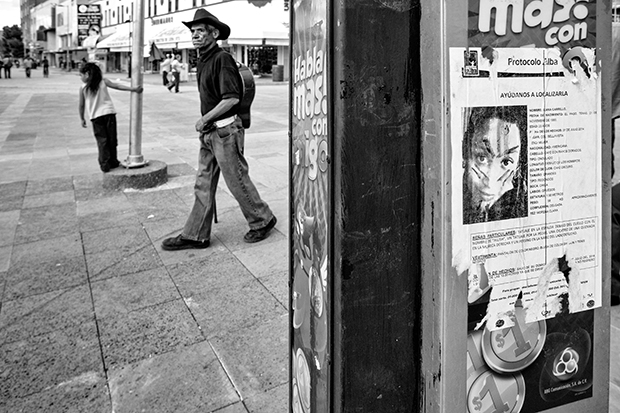 Downtown Juarez and a vandalized poster on a phone booth asking for information on the disappearance of Iliana Carillo, who went missing in 2014 at the age of 23. Ciudad Juarez, Mexico. Sept. 28, 2014. 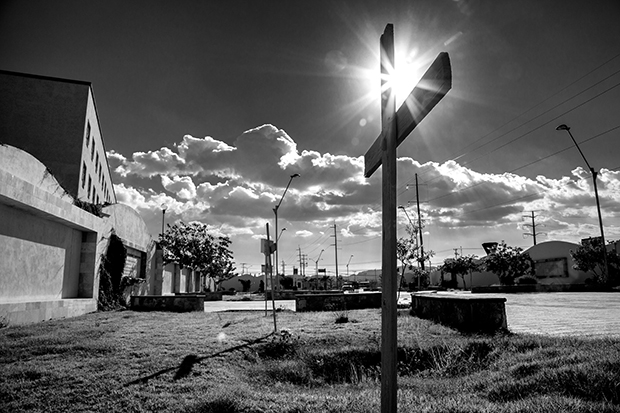 In November 2001 the mutilated remains of eight young women were found in a place known as “the cotton field.” A memorial has since been erected in its place. It’s a large area dominated by crosses that bear the names of the missing and dead. Ciudad Juarez, Mexico. Sept. 26, 2014. 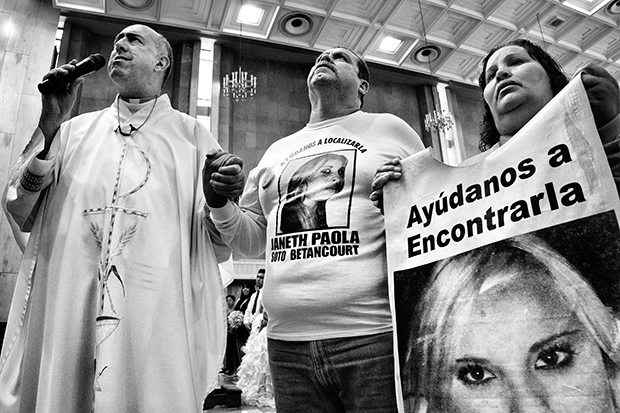 Father Eduardo Hayen Cuarón holds a vigil at the Cathedral of Our Lady of Guadalupe for the parents of Janeth Paola Soto Betancourt who disappeared in 2011 at the age of 19. Ciudad Juarez, Mexico. May 23, 2015.

A mural painted by Maclovio “MAC” Macias to commemorate the lives of Esmeralda Castillo Rincon and Brenda Berenice Castillo Garcia. There is a joint effort by local street artists to paint as many murals as possible due to the municipality’s unwillingness to continue to let activists hang posters for the missing. Ciudad Juarez, Mexico. May 18, 2015.