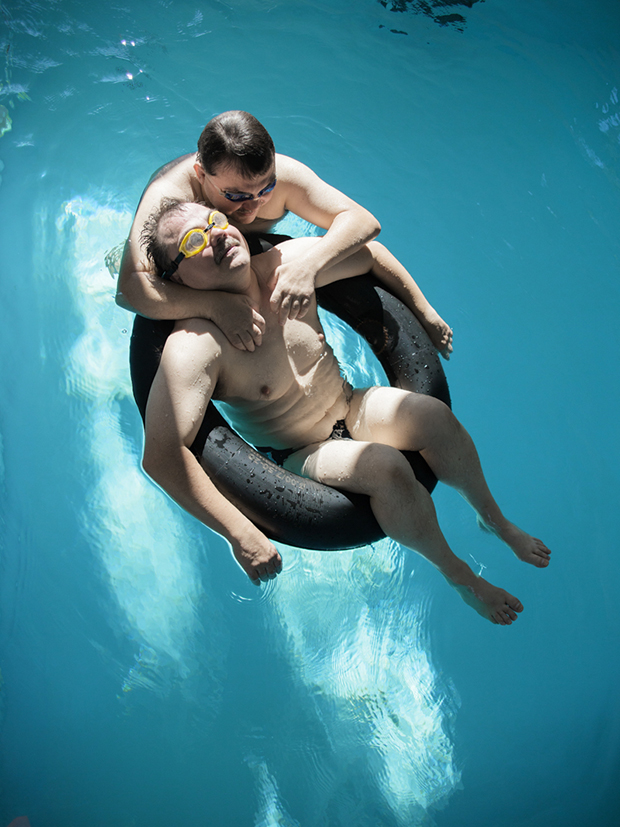 Jorg pushes Rolf through the water during the weekly swim therapy.

“I instantaneously knew that I wanted them to be my protagonists,” says Berlin-based photographer Marlena Waldthausen of Jorg and Rolf, twin brothers living at the Deutsches Taubblindenwerk Fischbeck, a village of about 120 people living with deaf-blindness. Without the use of sight and sound, they communicate with each other through touch. On that first day, they were making each other laugh by playing, pantomiming nibbling on one another’s fingers.

The brothers, explains Waldthausen, were both born completely deaf, and Jorg lost his eyesight entirely to diabetes; Rolf has 3-15% vision in one eye remaining. Before moving to the facility, where they live in an apartment that also accommodates six other people with disabilities, they lived with their parents, and together, they have learned to be as autonomous as possible.

The photographer met the brothers after spending some time at the center, just getting to know the ins and outs of the place without bringing her camera into the mix. With help from the resident staff, she asked permission from the twins to shadow them and take pictures.

Over time, she longed to understand them better and studied the Lorm Alphabet. She underwent training courses similar to those taken by staff members at Deutsches Taubblindenwerk Fischbeck. The twins taught her how to communicate, and through observation, she slowly became more comfortable interacting with them.

Both Jorg and Rolf are playful fellows, and their humor is rooted in witty play-acting and body language. Because he still has some sight, Rolf has taken on more of a leadership role, helping his brother and second half, as the two of them navigate a precarious and uncertain world. The pair manages well with routine, and at the facility, they have responsibilities, jobs, and hobbies.

Their weeks are heavily structured around occupational and physical therapy. They swim together, and Jorg cares for the chickens and dogs, while Rolf rides and tends to the horses and helps maintain the greenhouse.

One of the hardest things about working with the twins, suggests Waldthausen, was not being able to express herself through smiling. “I smile a lot when I talk,” she admits, and she had to get creative in conveying her good will and compassion towards Jorg and Rolf.

Rolf tells Jorg about the portraits she shows him, and as a Christmas gift, she gave them a book of images. She’s expressed her gratitude, but still, the photographer confesses, “there are a lot of things that I would like to tell them that I can’t.”

Sometimes, a photograph can mean more to the brothers than it might to someone with full use of their sight and hearing. When Rolf saw the photograph of himself and Jorg in the disco room, for instance, he asked his mother where it had been taken. Explains the artist, “He remembered the room but hand´t been able to see it until he saw the photograph.”

Marlena Waldthausen is a winner of the Second Annual Feature Shoot Emerging Photography Awards, and selected images from Brothers will be on view at United Photo Industries in DUMBO, Brooklyn as part of the exhibition Developed: Five Emerging Photographers. 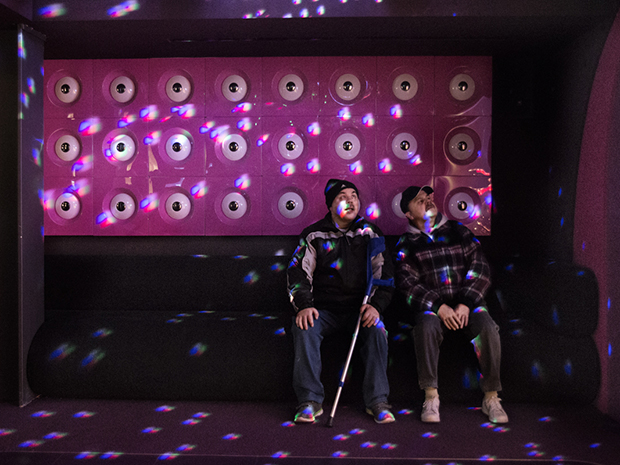 At a visit in a museum, the brothers were especially fascinated by the light reflections in the disco room. 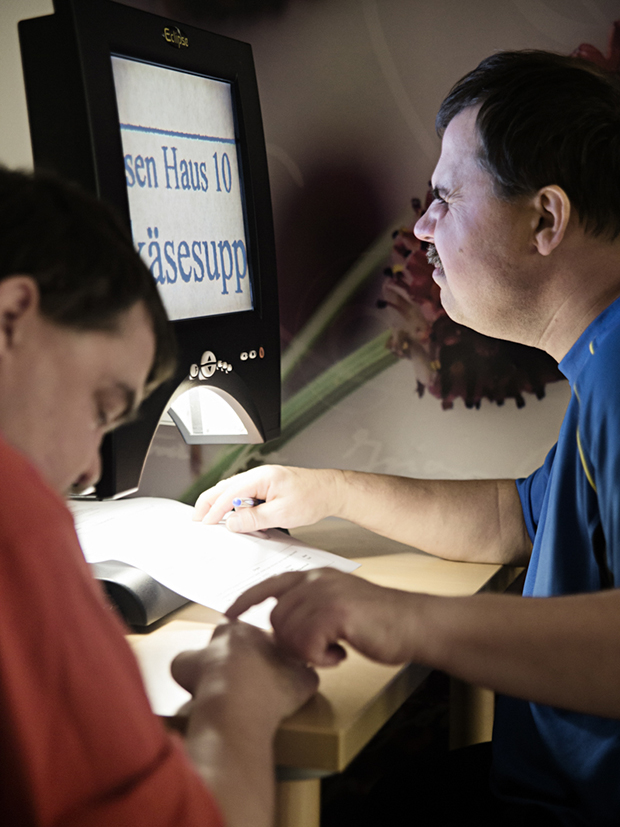 With the help of his reader, Rolf reads the weekly mealplan and translates for his brother.
Afterwards, they discuss which meals to choose. They always choose the same meal for both of them. 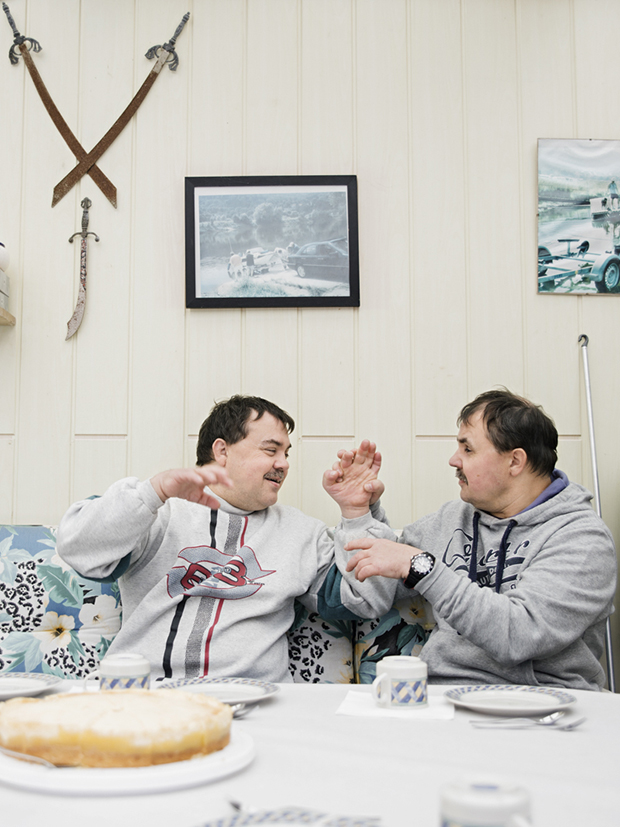 Jorg and Rolf are waiting for visitors at their parents´ winter garden. 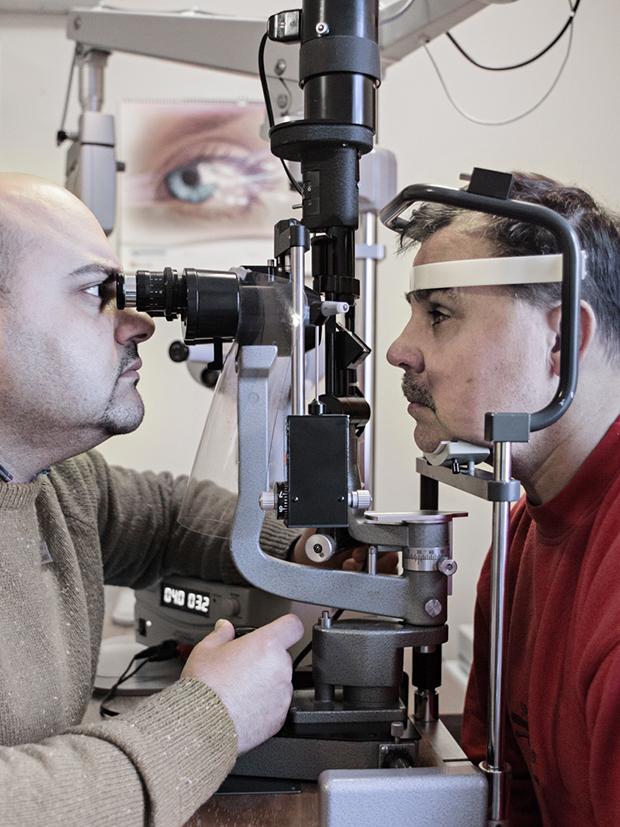 Rolf has to go to the doctor’s regularly to check his eye pressure. 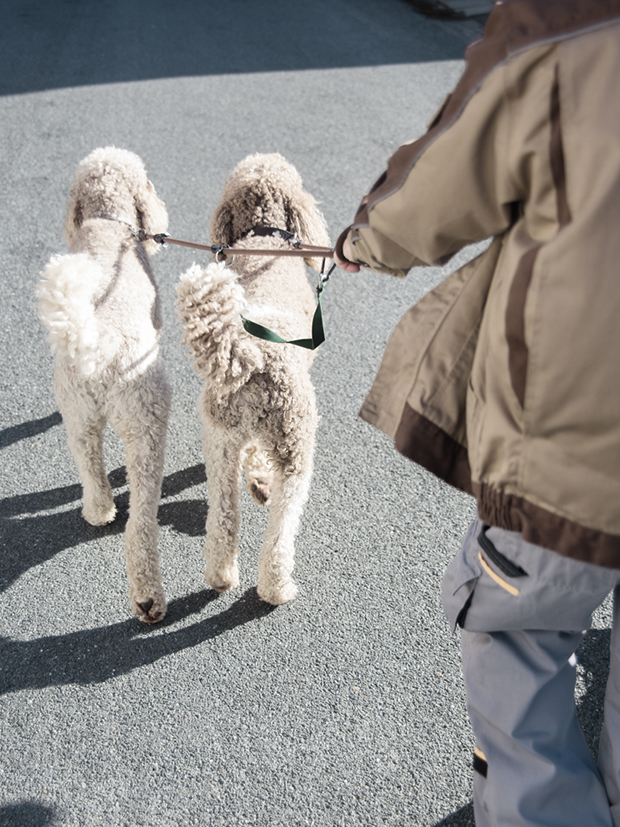 Rolf loves the riding therapist’s dogs. Jorg’s and Rolf’s own dog Bobby died shortly before they moved to Fischbeck. 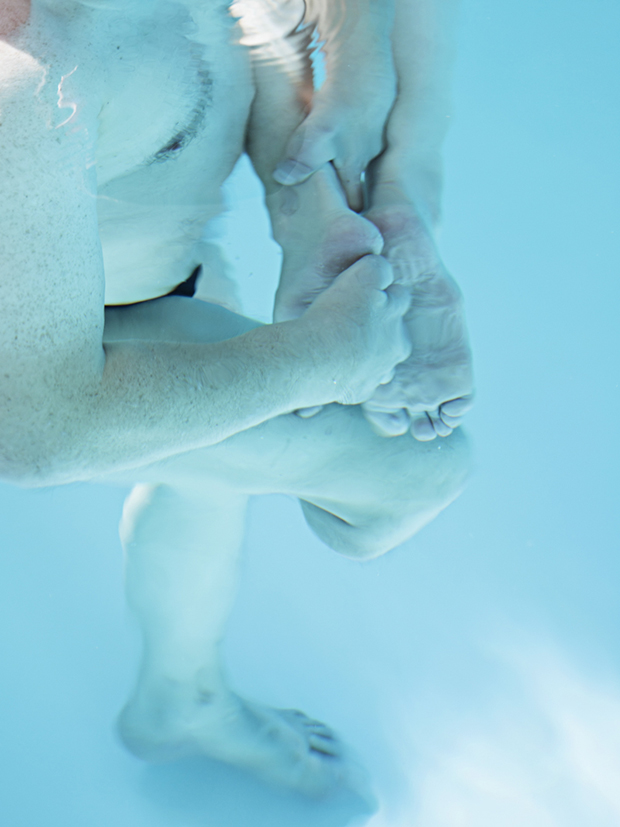 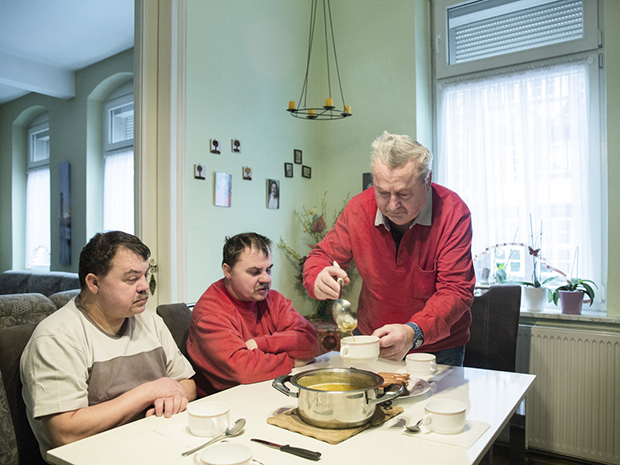 Lunch at their parents’s house. Before retiring, Mister Fischer worked as a chef at the German Red Cross. Rolf used to help in the kitchen when his sight was better. 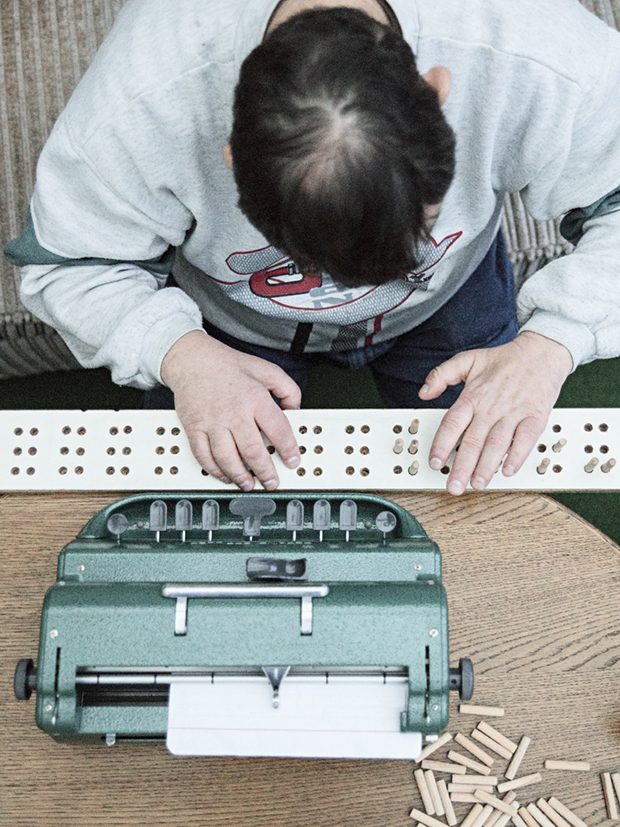 Jorg practices typing on a braille typewriter. His parents made him a wooden board with small wooden pins, so Jorg can feel the letters. 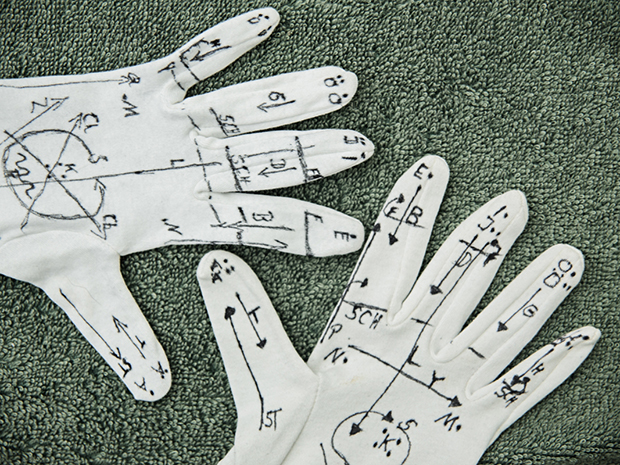 Jorg and Rolf’s parents drew the lorm alphabet on a glove. The lorm alphabet was developed by Hiernoymus Lorm in 1881 to enable communication with and between deafblind people. According to the symbols, you stroke and tap over the palm of the hand. 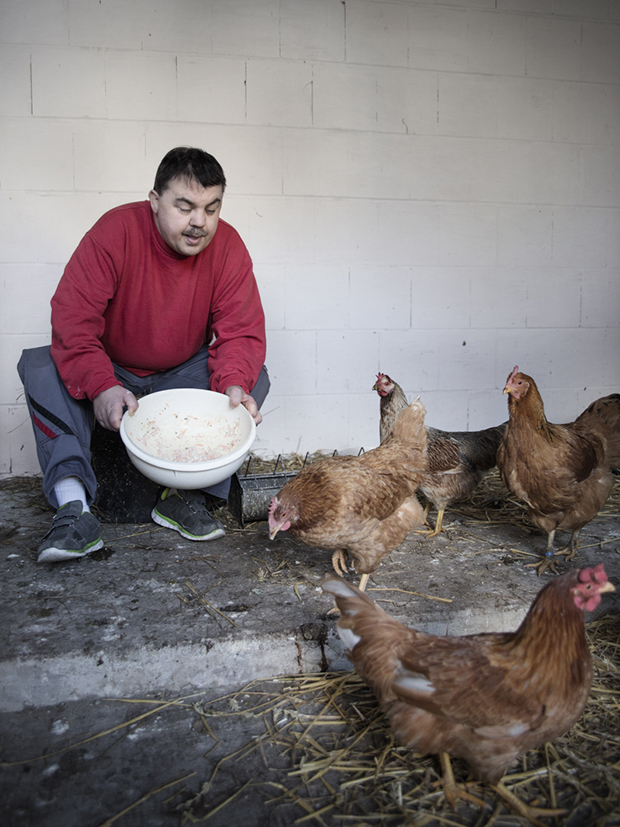 While Rolf goes to horse-riding therapy once a week, Jorg prepares the feed for the hens. 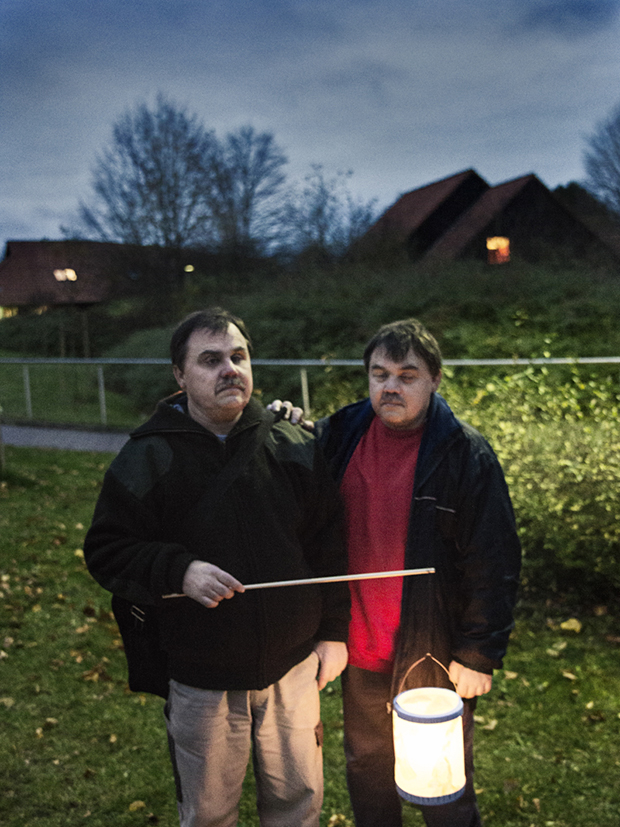 Jorg and Rolf at the yearly lantern walk in Fischbeck. When the facility was expanded, they took the chance to move into to two rooms next to each other in 2012. 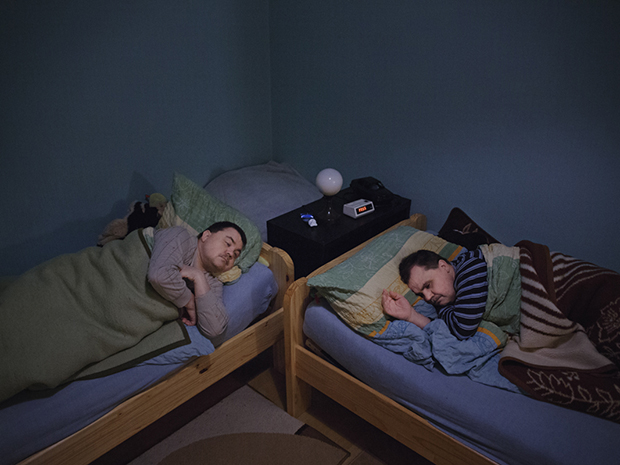 Due to his artificial leg, Jorg can’t properly use his own flat at their parents’ anymore and sleeps with Rolf in his dormitory. They turned down the suggestion to share one big bed, as they were convinced they would kick each other at night. 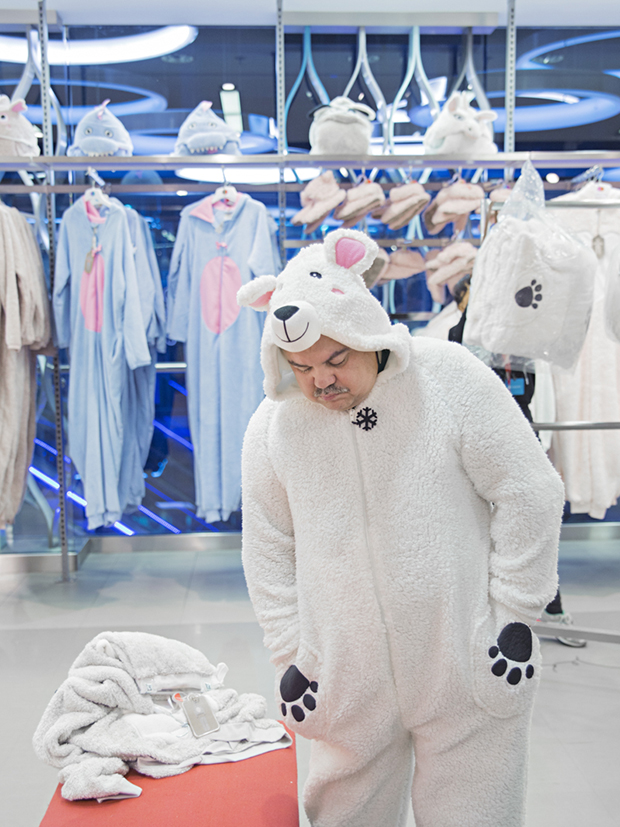 In order to buy costumes for a carnival, the twins went to Hanover with two people who look after them. Jorg is sad that there is no dog costume. 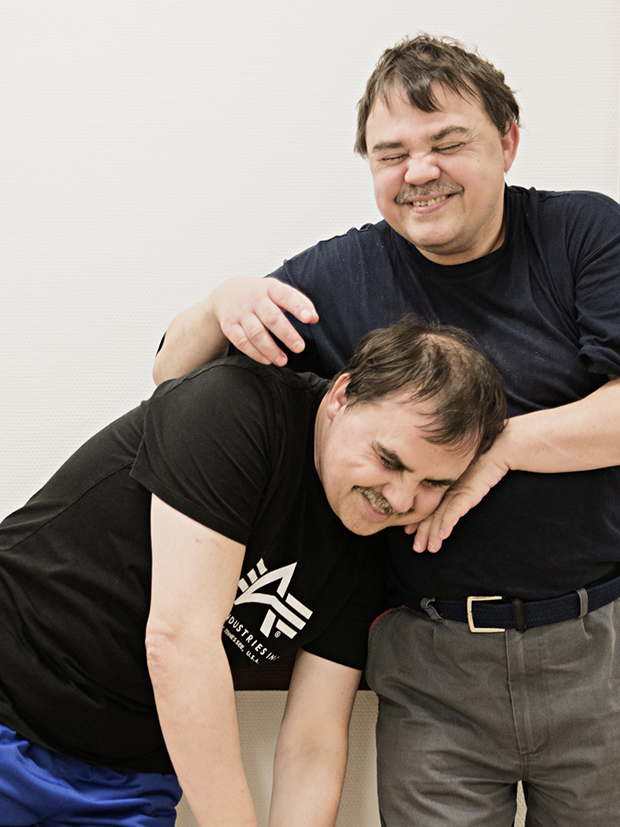 They often stand in the corridor in front of their rooms and fool around. They pull each other’s ear, push each other around in the wheel chair, or pretend to fall or eat each other’s fingers. 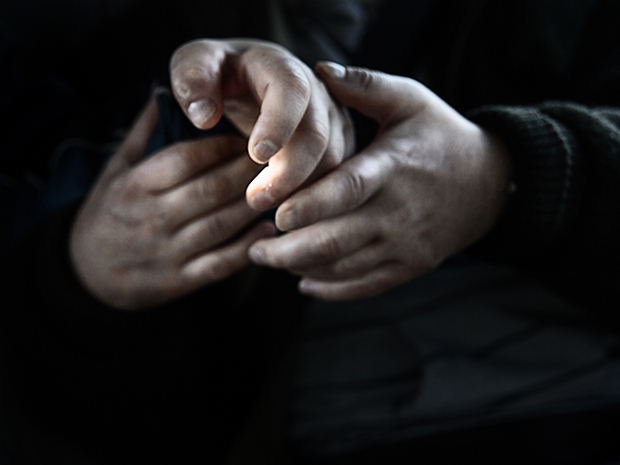 Like most deafblind, Jorg and Rolf use tactile sign language. They take each others hands while signing, so the other one can feel the signs. Over the years, they developed there own signs, so for outsiders, their conversations are often hard to understand.